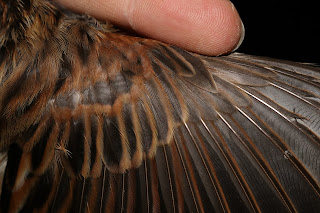 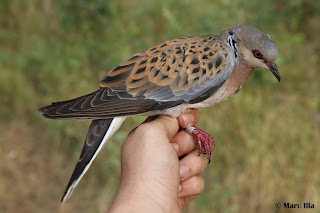 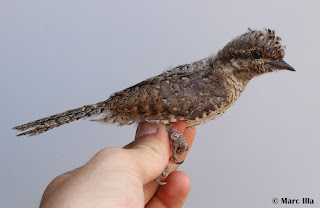 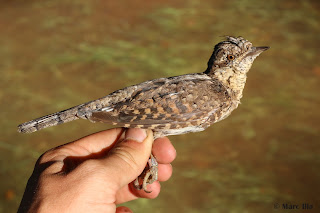 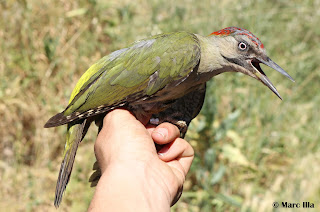 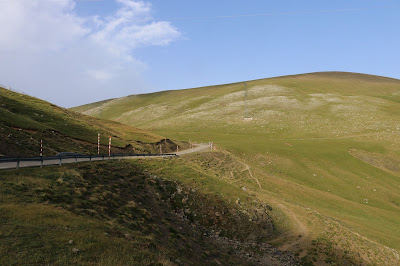 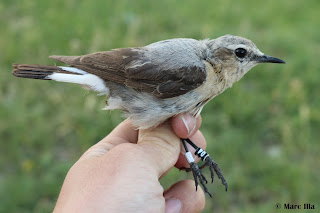 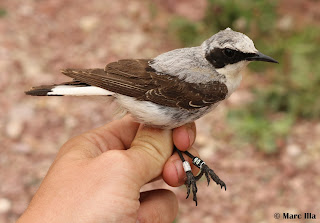 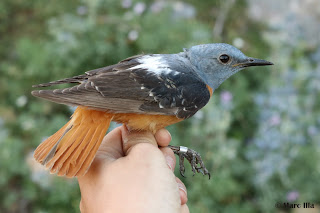 But it was also a good opportunity to get experience with other typical species on this open habitats.
An intense summer, with a lot of ringing, a lot of interesting data gathered and picture documentation... but too few time to put everything in order!!
Posted by Marc Illa at 1:56 PM No comments:

Millions, literally, of migratory birds fly over the Falsterbo peninsula every autumn. Its geographic position fits in what could be defined as a migration 'bottleneck', that Scandinavian birds use to shorten the sea-crossing from the southernmost parts of Sweden to Denmark or Poland, crossing the Baltic Sea. For anyone with a little passion for birds, a good day at Falsterbo is a truly astonishing experience.


The video above is representative of some minutes on a rather 'normal' September day at Falsterbo. It was recorded this last 16th of September, and you may recognize several passerines calling while actively migrating.


At the very start of the season, by late July, Acrocephalus species are already on the move, especially Sedge Warblers (A.schoenobaenus) but also the first migrant Reed Warblers (Acrocephalus scirpaceus). As soon as August starts more and more species finishes their moults (if they have any) and start their journeys south. As shown above, passerines migration reaches amazing numbers though August and September, when they are mainly Tree Pipits (Anthus trivialis), Yellow Wagtails (Motacilla flava), White Wagtails (Motacilla alba), Barn Swallows (Hirundo rustica), Sand Martins (Riparia riparia) and many other species. During September, Meadow Pipits (Anthus pratensis) will start dominating and finches will take over too, Song Thrushes (Turdus philomelos), Dunnocks (Prunella modularis), Goldcrests (Regulus regulus), Blue Tits (Cyanistes caeruleus) and with hundreds and hundreds of Chaffinches (Fringilla coelebs), Bramblings (Fringilla montifringilla), Siskins (Carduelis spinus) and other species like Reed Buntings (Emberiza schoeniclus) move on on daytime.

Irruptive species are every year, the biggest change. This year it was a very good season for Crossbills (Loxia curvirostra), also some Two-barred (Loxia leucoptera) on the beggining of the season and very good numbers of Parrot (Loxia pytyopsittacus) during October!


Raptors are also a big attraction to Falsterbo. Big numbers of Honey Buzzards (Pernis apivorus) can be seen during August, and then they are replaced by thousands of Common Buzzards (Buteo buteo) during September and October. Red Kites (Milvus milvus) are common migrants too, such as Marsh Harriers (Circus aeruginosus), but Hen (Circus cyaneus), Montagu's (Circus pygargus) and Pallid Harriers (Circus macrourus) also occur regularly through the season. Also worth mentioning the Black Kites (Milvus migrans), which are also uncommon but regular migrants over the peninsula. Eagles are always special, and usually, if any Eagle is wandering around southern Sweden it will eventually show up over the Falsterbo peninsula. Lesser Spotted Eagles (Aquila pomarina) are probably the more regular species, but Greater Spotted Eagles (Aquila clanga) also appear, and also eventual Steppe Eagles (Aquila nipalensis). Not to mention the regular White-tailed Eagles (Haliaeetus albicilla) or the Ospreys (Pandion haliaetus), which both occur regularly, especially the latter.
In terms of numbers, it's really shocking the large amount of Sparrowhawks (Accipiter nisus), that easily reach hundreds of individuals per day, and totals usually taking over 20.000 individuals each season. Falcons are less abundant, but also regular in good numbers, such as Hobbies (Falco subbuteo), Peregrines (Falco peregrinus), Common Kestrels (Falco tinnunculus) and Merlins (Falco columbarius).
Looking at the beaches, sandbars and pools close to the shore, good numbers of ducks and waders stop to feed and rest. At the beginning of the season, by late July and early August, hundreds of Terns (mainly Sandwich Sterna sandvicensis, Common Sterna hirundo, Arctic Sterna paradisaea) and waders, such as Red Knots (Calidris canutus), Bar-tailed Godwits (Limosa lapponica) and Oystercatchers (Haematopus ostralegus) are seen in rather big numbers. Dunlins (Calidris alpina) are also very common, peaking during August, and several more species appear in big numbers. 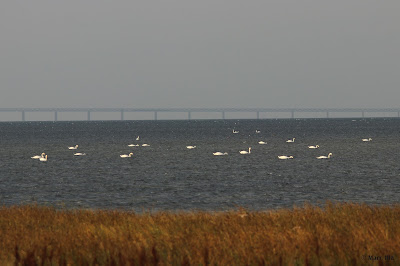 ... and several unexpected stuff, as these Short-eared Owls (Asio flammeus)! 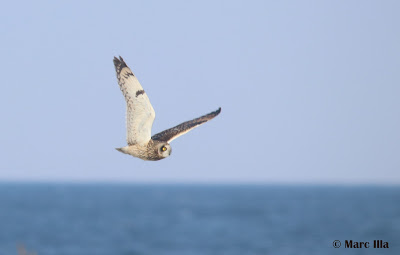 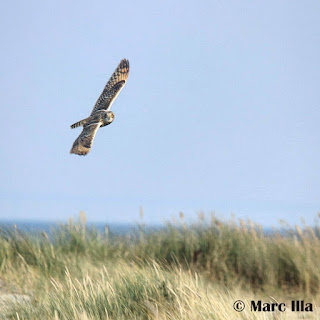 As you can imagine, this has been just a little glimpse of how amazing can be just to go to Falsterbo, sit down and enjoy bird migration. You can see pretty much anything migrating there... except maybe for actual seabirds, which sadly have decreased a lot around the area since the building of the bridge that connects Copenhague and Malmö. Nonetheless, in a nice, very strong westerly winds, it is worth going to some coastal places in the northern parts of Scania, where you might be lucky and enjoy big numbers of several seabird species, including sometimes very good views.

On my very last day this season we went seawatching around Torekov headland, and we saw this amazing Black-browed Albatross (Thalassarche melanophrys) from Rammsjö!!!