The implication of these sentences is clear: only first winter male 'paradoxus' Black Redstarts will be possible to sex. But, what does a 'paradoxus' look like?


Although I haven't been able to find any publication where both morphs are well-defined; what is said in the literature is that between 10-12 % of 1w males are 'paradoxus', even the concept is not fully defined. There's a Catalan project named "Cul Roig" where the proportion of 'paradoxus' was also studied, obtaining 10% as a result (www.phoenicurus.net).

The first explanation for the different morphs that come to my mind is related to competition and sexual selection. When a bird species is delaying the acquisition of the definitive colour and pattern of plumage until after the first potential breeding period it is referred to as having a delayed plumage maturation (Hawkins et al. 2012). Many hypothesis have been made and tested to explain DPM in Black Redstart, "Female or Juvenile Mimicry Hypothesis" being the mainly studied one, and not supported. As far as I could find, the explanation of DPM in Black Redstart remains uknown (Landmann & Kollinsky 1995, Kollinsky & Landmann 1996, Cucco & Malacarne 1999, Senar 2004, Schwarsová et al. 2010, Apfekbeck et al. 2012).

On 04/03/2015 I trapped three Black Redstarts in my usual ringing place. This wouldn't be noticeable, but two of them showed very interesting traits. 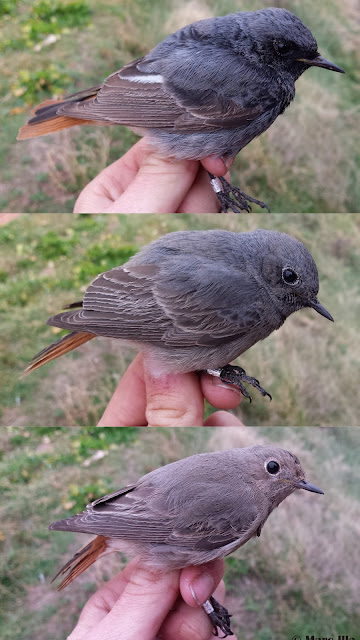 I saw the first bird from the distance and I quickly thought "what a nice adult male!". The actual excitement came when I realize it was not an adult! 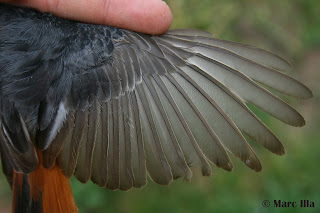 This is probably a very typical 'paradoxus'. All moulted feathers are like they would be in an adult male. 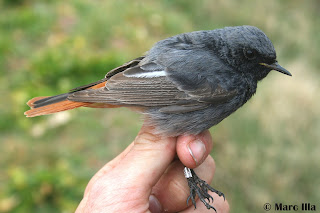 The second bird I trapped was more intriguing. Postjuvenile feathers (body, head, lesser, median and 3 inner GCs) were greyish, a bit more intense and colder than a usual 1w Black Redstart, and more greyer than what I would expect on a 'cairii' male too. Some black feathers were hidden on the chin and breast. I sexed this bird as a male. 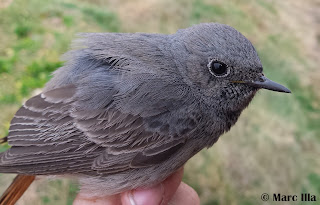 If a 'paradoxus' is a first winter male Black Redstart showing "male traits", this bird should definetely be considered of this morph. Thus, 'paradoxus' might include huge variation, depending on the two main factors: moult extension and "male-like" postjuvenile plumage degree.
The third that was trapped was also a 1w, looking like a 'normal' bird, either male or female. 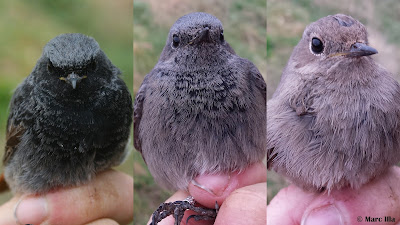 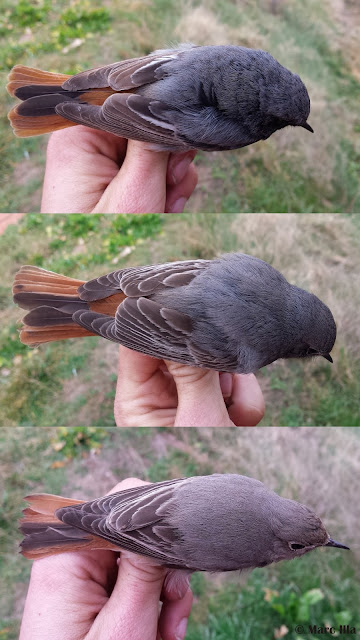 Doing some research back home after that, I found these very interesting tips on sexing 1w ochruros in the very useful Ringer's DigiGuide. I don't know if this has been validated with retraps, but I believe it anyway. I will still be quite reluctant to sex 1w females on this feature because I think I might need more experiece if it's not clear. As it will be explained later, 1w males seem to show huge plumage variation, and as it is also commented on DigiGuide, "an unknown portion of post-juvenile male tertials does not seem to show the white edges"; so I don't feel comfortable sexing a female on this feature that some males could show too. What it is more clear to me is that if a first-year show any of this "faint male traits" (white edges on moulted tertials / SS, very grey body feathers or wing coverts) it should be safey sexed as a male. 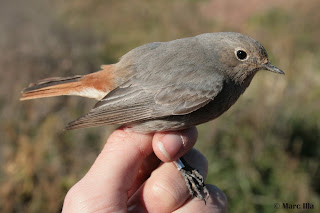 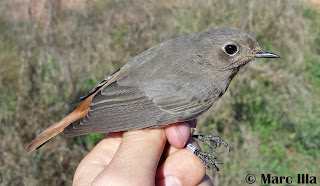 The Ringer's DigiGuide also refers to intermidiate morph individuals. As I said with that bird above, these intermidiate birds should be defined as 'paradoxus' too on the basis of the male traits they (already) show. It seems that 'paradoxus' has a huge variation, as I said before, depending on two factors: moult extension and the colouration of postjuvenile feathers.

Sadly I don't have enough data on moult extension from Catalunya, although my feeling is that most of 1st winter birds that I have trapped have moulted between 1 and 5 GCs. What I find especially interesting is that most of the 'paradoxus' that I have seen had quite extensive moults. For example, the first bird from March 2015 had 6 GCs and two tertials moulted.

The following bird was trapped at Falsterbo Bird Observatory during this autumn season. The extension of the moult is quite surprising, involving all greater coverts, carpal covert, all alula, tertials and 3 inner secondaries. As it sometimes happen with unusually extensive partial moults, there's some asymetry, with the second secondary and a primary covert moulted on the left wing only, and the middle alula feather unmoulted on the left wing as well. 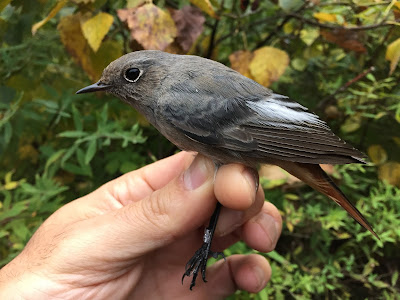 Such intraspecific differences in the partial postjuvenile moult extension have been reported in other passerine species, and most of them are related to different populations with different biology, like different migration distances, etc., like most of Fringillidae species, with more extensive moults in S Europe. Individual quality has been also suggested to be very determinant to individual partial moult extension. With moult data from Sweden (Ottenby Bird Observatory, online), Switzerland (Jenni & Winkler 1994) and Catalonia (personal data), it seems there's no significant differences. What attracts my attention is that 'paradoxus' seem to have  more extesive postjuvenile moult in average. This difference could be especially related to individual quality, which I think could be determinant too to show "male traits" in the plumage (to be 'paradoxus'). First-year males with higher individual quality would be more prone to showing "male traits", and also a more extensive moult, while first-year males with poorer condition would be more similar (or identical) to females in plumage, and with a less extensive postjuvenile moult.


To me, this also suggests that we can expect an almost continous gradient between the two classical morphs, 'cairii' and 'paradoxus', from 1w males identical to 1w females (and therefore unsexable), to birds like the one above to the right. This gradient would include the full plumage: amount of dark feathers on body and head, white edges on tertials and secondaries (if moulted), grey colour on body feathers and moulted wing coverts, and so on.

Another example of variation, this first-year male that I trapped last week: 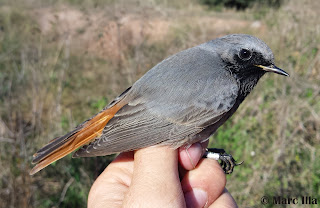 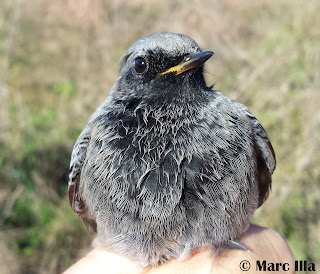 Supporting the whole thing, it seems that levels of testosterone can have some influence when doing the postjuvenile moult, and determining the morph (Schwarzová et al. 2010). Testosterone levels can be determinant for different reproductive related things in birds. For instance, it's been proven that testosterone also affects song modulation in the Black Redstart (Apfelbeck et al. 2012).

More research is still needed to confirm many things about this morph. In the meantime, I encourage you to go out, find some, document and report them!

Acknowledgements
To Josefina Pehrson to review and improve the text and also let me use her pictures of the Falsterbo bird, and to Bernat Ferrer, who sent his picture of the breeding bird (it was actually a female!), and also for the help in many sessions were Black Redstarts have been caught.