Last Wednesday, 16th October, was a really special day for my usual ringing place, l'Aiguamoll de la Bòbila. The first ringing day ever in this place was in the 16th October 2011, when I was just learning how to ring. That day, Joan Pujol and Miquel Batriu came, and we trapped 28 birds. I'll never forget the first bird, a first-year male Blackcap (Sylvia atricapilla)...

As I was saying, this Wednesday I reached 1000 birds ringed there. It's just a simple and low number if we compare with other places, but keep in mind it's a really small place inland Catalonia, and more that 900 birds have been ringed during the current year. Also, I'm glad for the nice number of species ringed, a total of 65. You can see a summary at the end of the post.
Also, on Wednesday I trapped a Tree Pipit (Anthus trivialis) there. It's a common species when they're in active migration, and actually I had never expected to catch one 'easily'. Looking at the bird properly, it probably had some problems with a Sparrowhawk or something when it was migrating, and now it have to recover energies to reach Africa. As you can see, all secondaries in both wings were missing (!), and the bird also had a heal injury in the body. It will be in l'Aiguamoll de la Bòbila for some days... 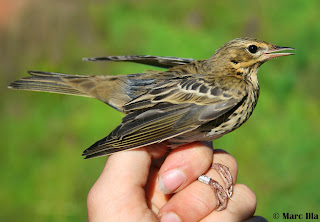 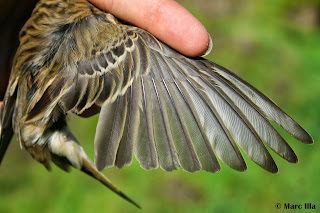 Last weekend I also was ringing there, both days. On Saturday I had a nice day, with lots of Chiffchaffs (Phylloscopus collybita) ringed. I've been recording the extension of the postjuvenile moult in wings and tail for every bird. 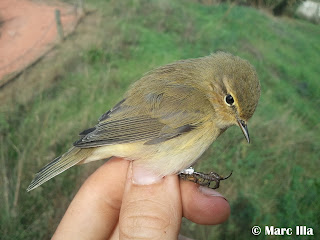 During these days, lots of presaharan species are arriving. Blackcaps (Sylvia atricapilla) and Song Thrushes (Turdus philomelos) are, together with the Chiffies, the commonest species. Song Thrushes are specially easy to heard during all night, because they use to call when migrate. I've already heard more than 100 birds during the last 4 days (and without spending more than half an hour each night!). Nonetheless, some transaharan birds are still around... 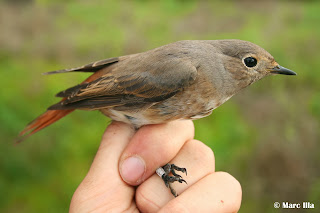 The best bird of the weekend was this 1st-year male Sparrowhawk (Accipiter nisus), that finally found on the nets! (I had been seeing it for the last few days flying around...). 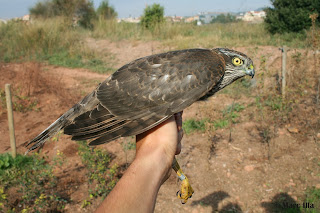 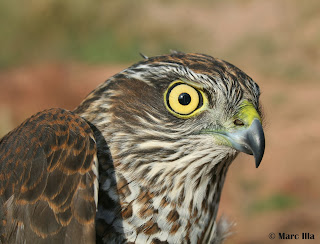 Both Tree Pipit and Sparrowhawk were first ringed birds in the place. In the beggining of October I also trapped a new species to be ringed, a Grey Wagtail (Motacilla cinerea). 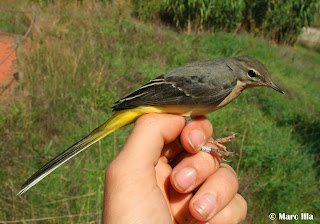 This autumn I've already ringed 7 Bluethroats (Luscinia svecica), a really nice surprise. 4 of them were ringed in September, during a 'mini ringing campaign' that I did, and the rest had been trapped during October. It was a great surprise the 8th svecica, that was carrying a ring from Germany!! It's the third 'foreign recovery' this year in this place, after a Reed Bunting (Emberiza schoeniclus) from Poland and a Song Thrush (Turdus philomelos) that was found in France after being ringed in my place. 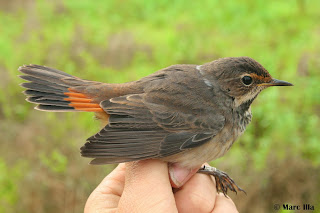 Here you have the ringing totals, uptaded yesterday: