Whilst ringing some Barn Swallows (Hirundo rustica) in spring migration, some birds with orangish underparts attracted my attention. It's not unusual, but always 'special'. I wanted to say some things about them.

Following the genetic analyses by Dor et al. 2010, European-Mediterranean subspecies (H.r.rustica, H.r.transitiva and H.r.savignii) are part of a clade with no clear differences between subspecies. Actually, the study, together with Zink et al. 2006, suggests that the Barn Swallow could be treated as monophyletic (at least inside the European-Mediterranean clade), and states that the morphological differences between populations can be explained as a radiation in the early stages of differentation and potential later speciation. Following these findings, it seems likely that an African ancestor established the first population in Egypt, and then it expanded to Middle East and later on to Europe.

East-Mediterranean subspecies, transitiva and savignii, are well known to have orangish underparts. Typically, some orange-bellied Swallows appear in Europe, always provoking some discussion about their subspecific identification. 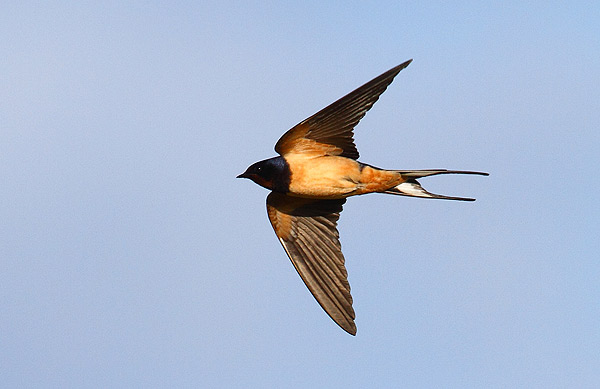 First of all, it's important to note that both savignii and transitiva are sedentary, while, as is well-known, rustica is a tran-Saharan migrant. That considerably reduces the chances of spotting an eastern Mediterranean subspecies outside of its breeding range, and, in fact, it makes them really rare in western Europe.

Appearently, no morphological differences appear to be discriminant to subspecies identification. At least, I haven't found any difference mentioned in bibliography apart from tail streams lenght, which is also a sex-related character (Vortman et al. 2011); savignii has shorter tails than the other subspecies, but this would not be enough to identify one.

As I was saying, the 'main' difference between these three subspecies is ventral colouration. While most of European rustica shows whitish underparts, Israeli transitiva are orangish, and Egyptian savignii are even darker, almost chestnut in some individuals.H.r.savignii is, on average, slightly smaller (Svensson 1992), though Cramp et al. (1988) found wing lenght range 113-125 (n=21), which overlaps considerably with the lower end of measurements for rustica.

Both tail streamers lenght and ventral colouration have been proved to be sexual indicators for this species (Vortman et al. 2013). Thus, apart from sex-related differences in this characters, we'll find even more variation due to sexual quality. So, males with longer tails and darker underparts will be 'more attractive' to females rather than other individuals.

Another study (Saino et al. 2013) points out the relation between melanin-based colouration and viability in Barn Swallows, which also supports the idea of orangish Swallows having higher fitness, specially (and more obviously) in the nominate subspecies.

After that, and in my opinion, both transitiva and savignii are not recognisable outside their ranges (at least without proper haplotype analysis -and sometimes this is not enough). So, the regular claims of orange-bellied Barn Swallows in Europe and NW Africa should be taken to be 'high quality' birds.

Indeed, although I have trapped a very few individuals, almost all orange-bellied birds I've trapped were males. Some other were intermidiate in measurements but and I haven't found any orangish birds safely sexed as a female (sexing according to Svensson 1992; tail fork in female up to 57 mm, male > 58 mm; I usually use 60 to avoid extreme females). Additionally, most orangish males I've trapped also had quite long tail streamers, and they were big too (wing lenght usually > 125 mm).

Acknowledgements
To Bernat Ferrer and Lídia Giménez for their help in the field, and for their interest, that inspired this post. Many thanks also to Stephen Menzie, who revised the text, and to Juan Sagardía for allowing me to use his pictures of the Canary Islands bird.