The last two months I have been ringing mostly in fluvial habitats and wetlands, pushing my waders to destruction! And I've got almost no time to write... Hope I can find some time from now on.

From the end of February to mid-March I focused to catch Water Pipits (Anthus spinoletta) in one of my local ringing sites in Central Catalunya. 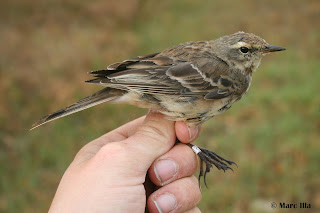 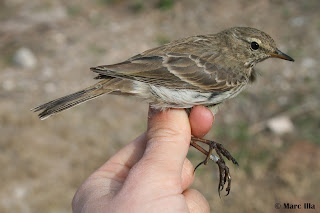 Grey Wagtails (Motacilla cinerea) are common in the area, and I trapped a few as well. 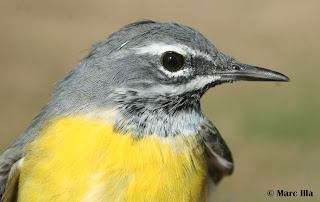 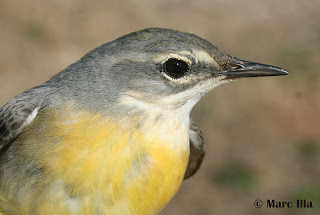 On the other hand, White Wagtails (Motacilla alba) seem to be a bit clever, and I've only got one despite being one of the commonest passerines in the trapping area! 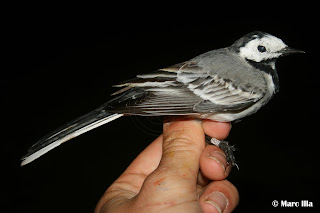 Other interesting stuff were this Green Sandpiper (Tringa ochropus), an adult (EURING 6): 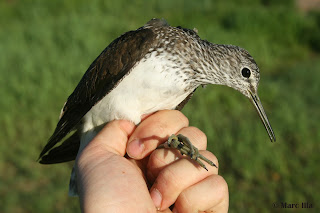 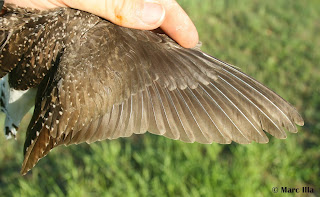 And this 2nd-year (EURING 5) Crag Martin (Ptyonoprogne rupestris). Compare with the adult (EURING 6) trapped last year in spring, in the picture below. 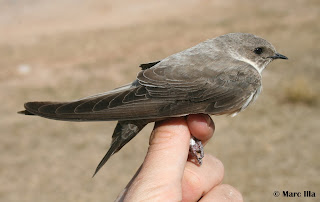 The 1st of April, friends ringing in the Balearics told me they got 5 Wood Warblers (Phylloscopus sibilatrix) early in the morning. We were surprised about the dates, quite early for this species, and we guessed that maybe it was going to be a very good spring for this species like last year was. I got even more convinced about this when I found one in the next netround!, but finally it's been a normal spring, nothing to see with last year. Probably, something happened that night between 31st March and 1st April... 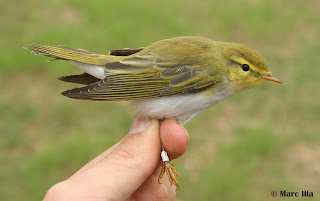 Bluethroat (Luscinia svecica) season it's been good in my area. As expected, all cyanecula...

But on a weekend ringing at Aiguamolls de l'Empordà (NE Catalunya) I trapped this short-winged Bluethroat... 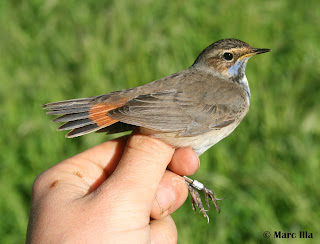 I went quickly to measure it: wing chord= 72mm, tail length= 50 mm. Being an adult (EURING 6) female, wing measurement it's just on the top limit for namnetum, but given the tail length plus the very short primary projection, it seems like a very good candidate!
It's interesting to notice also the amount of blue, and the wide and quite well-defined white spot; that fit with the age but may have some relation with the subspecies (at least the size of the white spot does!).

The main target that weekend was Aquatic Warbler (Acrocephalus paludicola), and we succeded!! 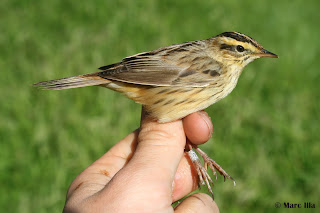 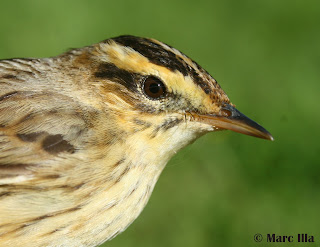 The weekend also produced 3 Bitterns (Botaurus stellaris) and a Baillon's Crake (Porzana pusilla) plus several Spotted Crakes (Porzana porzana) singing around.
Ah, by the way, I have a new pair of waders to 'destroy'!
Posted by Marc Illa at 10:58 AM