Birds can be caught not only during the day, so also during the night. Some groups are actually much easier to trap overnight, some groups as interesting as the waders. And although spend the whole night catching birds can be quite hard while working in an autumn ringing season, we dedicated some effort to catch some birds at Falsterbo. 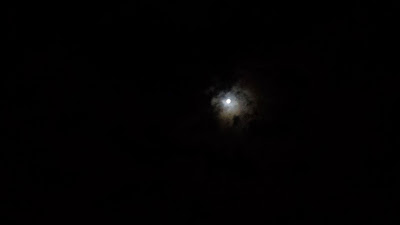 During the first night we went out for some waders we had quite high sea level, which difficulted putting up the nets on the beach as we usually do. We only could manage to set up two nets on a line, one of them starting from the beach and towards the sea. We caught more than 30 birds, with a nice combination of species, which reminded us that sometimes, even with difficulties (high water levels, wind or whatever), it's worth to give a try!!!

We caught several species in the different ringing nights, such as: 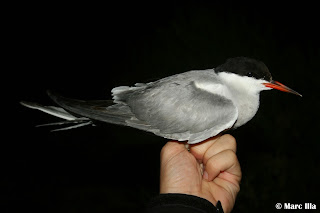 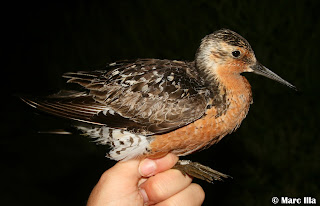 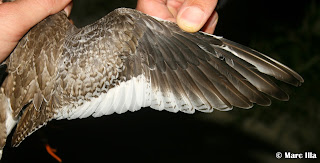 Apart from the size, some plumage characteristics can be useful too. Robusta redshanks are slightly greyer on the underparts, especially in the head and neck, and less striked. Also, tail pattern is slightly different: more espaced, well-defined black lines in robusta. In the picture below, robusta to the right and totanus to the left. 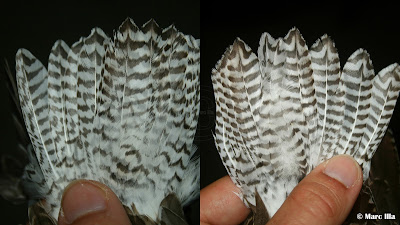 There's certaintly very few information on ageing Bar-tailed Godwits. According to Cramp et al. (1983) in  The Birds of the Western Palearctic, adults have a complete moult usually in winter (sometimes started in summer and arrested during migration), and juveniles have a partial postjuvenile moult. Both adults and first winter individuals have a partial pre-breeding moult too. Therefore, flight feathers in first-cycle birds are not replaced until their first summer.
Up to the 2nd summer (3rd calendar-year) birds are not mature for breeding, and thus some 1st summer (2nd calendar-year) individuals are staying over the summer in the wintering grounds. Nontheless, the rest of second-years are meant to migrate north even they apparenly don't breed. 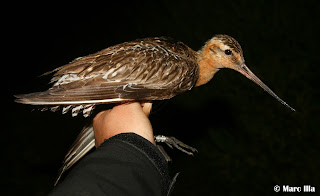 Even with few birds examined at Falsterbo, it seems like some individuals are clearly more worn and with much more narrow wing-feathers than the others. Pictures and comments below are speculative and based on my opinion, and after reading information from Cramp et al. (1983), Demongin (2016) and Prater et al. (1977) and looking at several pictures on internet.


Sex determination is based on measurements mainly, especially on bill lenght, which is larger in females (see picture below). Also, males are meant to be brighter orange-coloured in summer plumage (Prater et al. 1977). If you are interested in the subject, I recommend this 'hightly speculative' but very interesting post about Bar-tailed Godwit's bills.
Oystercatchers (Haematopus ostralegus) are very beautiful birds!! And there's few information about ageing and sexing too... at least that I was able to find.

According to Cramp et al. (1983), adults have a complete moult while juveniles have a partial postjuvenile moult. 1st-summer (2nd-year) individuals would undergo a complete moult during summer, so, so far, no known ageing criteria in plumage for second and third winter birds is known, only bare parts colouration, which is meant to change progressively from the juvenile to the 4+cy.

Later on in the season, we go less for wader ringing and more often to catch owls, if it's a good year. I usually leave Falsterbo before good owl ringing nights, so I haven't experienced it properly yet. Anyway, we caught 2 Barnacle Geese (Branta leucopsis) during our first 'owling' night, quite a nice surprise!! 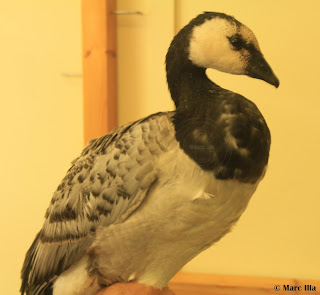