Although the actual spring equinox was yesterday, I always start to feel the spring in February, when you can already notice some birds migrating, mainly presaharan birds (such as Thrushes, Dunnocks...) or already the first House Martins (Delichon urbicum)  or Barn Swallows (Hirundo rustica). Also, White Storks (Ciconia ciconia) are regular on passage during February, and that makes quite an spring feeling already! Also, amphibians are quite active, and after a very nice rainy evening when we could watch several nice species, I considered the spring to have started.

After a rather good Black Redstart's (Phoenicurus ochruros) autumn season last year, it was expected also a good spring passage. At least it was quite good in my area, where I could notice well the arrival of migrants since all (or almost) wintering birds had been ringed. Once more, I've been surprised on the relatively high proportion of 'paradoxus' males. 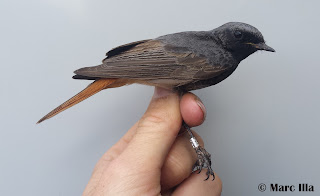 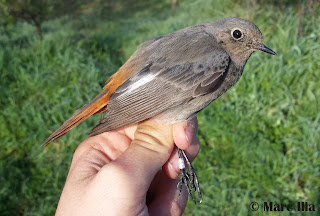 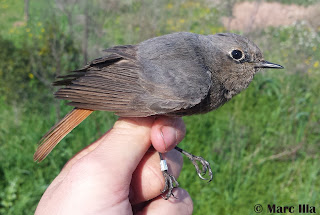 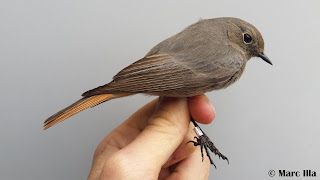 This year has been remarcable too in my area for several White Storks (Ciconia ciconia) sightings. During February we could enjoy some nice flocks, and during March, several lonely individuals turned up in different places.
Raptor's passage has been quite nice too in Central Catalunya, with about +200 Short-toed Eagles (Circaetus gallicus), 9 Marsh Harriers (Circus aeruginosus), 90 Black Kites (Milvus migrans), 7 Red Kites (Milvus milvus) (one of the best springs for both Kites in the area, already), +30 Common Buzzards (Buteo buteo), 20 Sparrowhawks (Accipiter nisus) and 4 Goshawks (Accipiter gentilis). This very nice adult (EURING 8; aged thanks to a retained secondary) male Sparrowhawk had stopped to feed while I was doing a ringing session. We caught it after it had fed recently (it had the crop completely full!), and it left straight away after releasing. 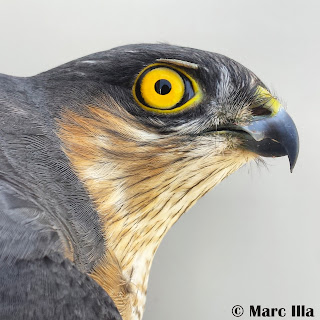 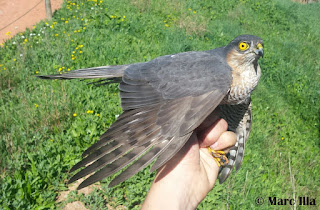 This dates are also very good for migrating Penduline Tits (Remiz pendulinus). Around my area in central Catalunya it can be considered a regular migrant, occasional wintering and rare breeding species. Most of migrants and wintering individuals fit with central European populations, both on phenology and moult extension. Ringing recoveries are also proving that, and this spring I could catch another central European bird: this time from the Czech Republic. Interestingly, the day it was caught another bird showed up nearby, and at least 2 other individuals appeared in Osona county, also in central Catalunya but where the species is much more scarce.

Ducks are another colourful migrants that are passing these days. So far, the warm and sunny days have provided just a few interesting wildfowl in my area, like this two Shovelers (Anas clypeata) that appeared on February, or this mixed flock of two Shovelers and 4 Garganeys (Anas querquedula). 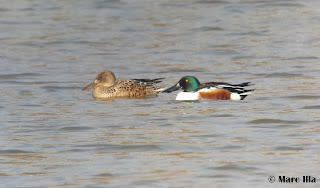 Water Pipits (Anthus spinoletta) are in heavy body moult between late February and March, and they gather in certain places, sometimes river shores half-way to the mountains, that are still mostly covered by snow. 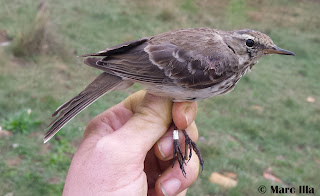 This nice Mallard (Anas platyrhynchos) was unexpectedly caught in the net that I had for the Water Pipits! 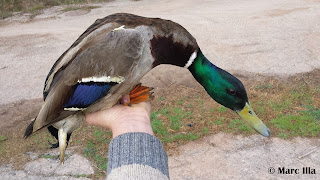 Little Ringed Plovers (Charadrius dubius) have also arrived!, and while some are still passing by, some breeding pairs are already taking their breeding territories.

The first Hoopoe (Upupa epops) that arrived this year in my main ringing station at l'Aiguamoll de la Bòbila was actually a female, and indeed it arrived very early in February, so probably had been wintering closeby, where an individual had been seen. 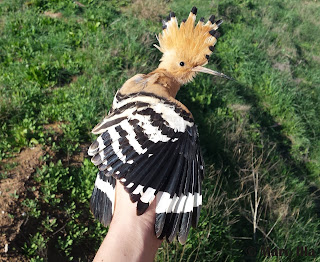 Another species that is also ready for breeding is the Grey Heron (Ardea cinerea), already fixing nests and soon busy with incubation. 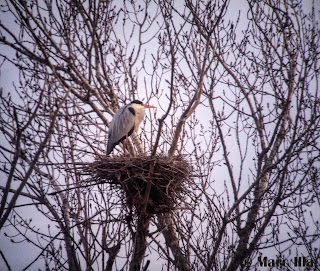 On the other hand, Little Owls (Athene noctua) are starting to be more vocal, and you may see some 'guarding' the nesting areas, even in the middle of the day!