Last week, a big squall apeared in the Western Mediterranean and was completely blocked between Catalonia and Italy, affecting big extensions of the sea. The trough caused abundant rains and winds coming from east... Is there any good thing in order to see eastern migrants? Probably not.

Let's see something about my last 5 magic days...

I was just 10 minutes from home, in l'Aiguamoll de la Bòbila, when everything started for me. I was talking with my father when an strange Circus passed close to me. Quickly, I reacted and I throw away my phone... It was probably a Pallid Harrier. Suddenly, the bird dissapeared. I tried to relocate it, and some time later, I saw it posing for me in a close field. It was a 2cy male, and yeah, a macrourus. I rested absolutely astonished for hours. It was the last Friday, 26th April. 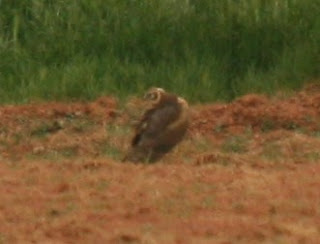 Saturday was a very rainy day, but not for this less interesting. It was just contrary to this... In the afternoon I was again in l'Aiguamoll de la Bòbila when another Pallid Harrier appeared. An adult male this time, a dreamed bird for me. I was enjoying him for some minutes and dissapeared. 'He'll probably go away tomorrow morning', I thought. Later, my first Grasshopper Warbler (Locustella naevia) this year (also a scarce bird in inland Catalonia), and some Montagu's Harriers (Circus pygargus), Black Kites (Milvus migrans) and Honey Buzzards (Pernis apivorus) migrating.

In Sunday, magic time continued occurring. I get my first car (last week I obtained the driving licence), and I was looking for more eastern birds. I saw lots of passerines migrating, emphasising 14 Wood Warblers in some places where there weren't seen before, a Icterine Warbler (Hippolais icterina) (both scarce birds in inland Catalonia), a Black Tern (Chlidonias niger) (very scarce in my area), an Osprey (Pandion haliaetus), Ruff (Philomachus pugnax), Common Greenshank (Tringa nebularia), lots of Wood Sandpipers (Tringa glareola), Black-winged Stilts (Himantopus himantopus), some Great Egrets (Casmerodius albus)...
On Monday afternoon, I saw a single Wood Warbler in my local patch and I relocate the adult male Pallid Harrier! The best bird of the day, but, was a Short-eared Owl (Asio flammeus) migrating, that decided to stop close to me. A Greater Short-toed Lark (Calandrella brachydactyla) was the perfect bird to close the day (also a very rare bird in my area!). 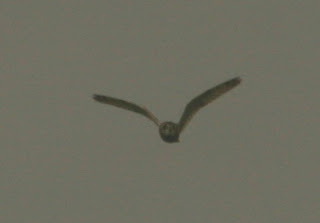 Today, I saw another Wood Warbler in l'Aiguamoll de la Bòbila and I saw the male Pallid Harrier twice. Last days I have been looking for some Collared Flycatcher but they will be still hiden...
The best thing, that encourages me even more for the next days, is the observation of the third Pallid Harrier in my area: a 2cy photographed by Jordi Comellas this morning.

Let's see what migration has prepared for me tomorrow. Whatever could be possible!
Posted by Marc Illa at 3:06 PM