Last Friday, 27th September, I drove to my small part of paradise: Cuberes.  During these days, a really impressive scene takes place. I'm talking about the Red Deer's heat period. I arrived quite late in the night, but I could see some Red Deers from the track, and of course, I could hear some.

Probably I'm just in love just this place. Besides the Cuberes Refuge, that is probably my 'second home', you can find an amazing combination of forests, meadows, peat bogs and some other habitats, that makes a really special area. I've been visiting this place for lots of years, since I was a kid, and yeah, I actually need to go there some times every year. Everything there is just part of me amb my life!! 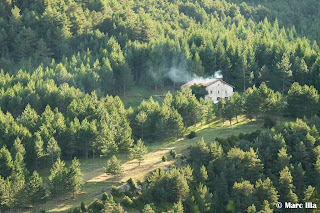 Last autumns I passed great times there, but for this time I felt I needed to be very close to male Red Deers, to enjoy the show 'from the first row'. On Saturday, I managed to be quite close to some active bellowing males, and I finally got one just 15 metres in front on me. Male Red Deers are a bit crazy when they're in heat, and sometimes they just ignore you. He was staring me at the same time I was staring him during some minutes. It's impossible to have sense of time when this things happen. Then he just left walking, slowly, throught the dense forest. It was impossible to take any proper photo, but the feeling, the magic feeling of meeting him, it's more than enough.
I continued finding some male Red Deers during the morning, sometimes just quick views, but it was quite good. Also, 3 immature Lammergeiers (Gypaetus barbatus) were flying together above the valley. 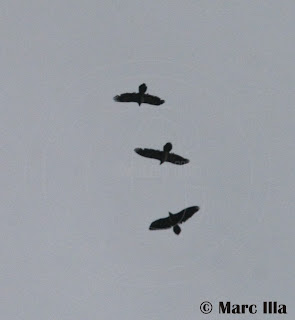 Up in one of the highest point in the closest moutain range, I saw more Lammergeiers, a bright orangish adult and this 2nd-year, some Sparrowhawks (of course...), Hobbies (Falco subbuteo) and Short-toed Snake Eagles (Circaetus gallicus) migrating South. Also about 500 House Martins (Delichon urbicum), about 150 Barn Swallows (Hirundo rustica) and 2 Yellow Wagtails (Motacilla flava). It was quite funny when I heard flocks of Common Crosbills: I just stopped and heard carefully, waiting for a Two-barred calling among them. Of course I didn't heard any, but this proves that I'm still affected for the 'Falsterbo syndrome'... 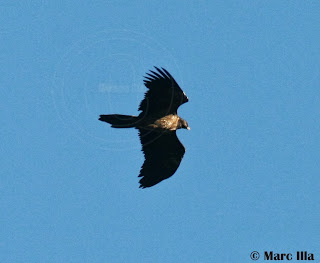 As I saw some migrants, I decided to go to another place in the afternoon, good for Deers and also for migrant birds. The best sighting was, without any doubt, this adult Osprey (Pandion haliaetus). It's the first time I saw this species there, so it was kind of special! Also I saw a Black Vulture (Aegypius monachus), probably from the reintroduction project. 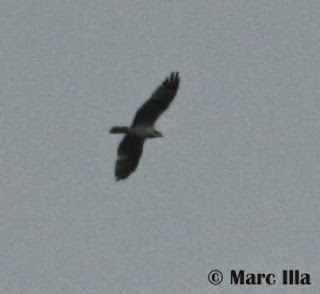 Lots of people come to the Refuge every year in September to hear and try to see some Deers. Usually they are people that is not used to be in this kind of places, and they are all day 'screaming' and making noise. Probably because of this Sunday's morning was quite boring, almost any Deer was bellowing close to the refuge valley. Also, lots of clouds pretended to scare me... but finally, no rain and most of the people left in the midday. At least, I saw some nice birds during the morning: 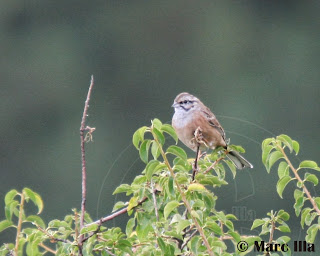 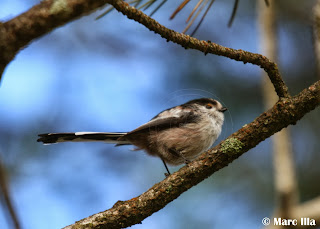 As it was my last chance to enjoy what I was looking for, I went to the best place I knew. Just when I arrived there, I found two nice males and I decided to hide myself between some bushes. About an hour later, this male appeared just 5 metres besides me. I was completely motionless then, and he didn't notice me, so when it was a bit further, I managed to take some photos. 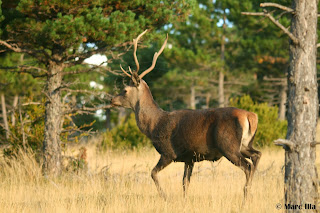 I spent an hour more there, and althought I saw some males more, all of them were 'young' males, not the huge bellowing males with big horns that I wanted to see. One of these big males had been all afternoon bellowing quite close (in fact, I was waiting for him...), but as he didn't appear, I decided to go straight to him. Walking slowly and carefully through the forest, I got quite close. I was hearing him as loud that I was trembling every time he was bellowing. It was getting darker and it was really difficult to take proper photos, so I turned off my camera to be more concetrated with the show.
Suddenly, I realised I was just surrounded by females, so I guessed I was just in the middle of that male's 'territory'. Then, some 'satellite males' (as I call the young ones that are not bellowing, just trying to find a female and to skip the big male) appeared, and the big male got almost crazy. He started to pursue them, and also a small fight took place, just in front of me. Minutes later, another big male arrived, and the tension could be noticed in the air. Both big males started to bellow stronger and to run thought the woods...
The night arrived and I had to leave, but I'm sure I'll never forget those magic strong feelings, and the huge privilege of being there, just looking from 'the first row'.