During last days we have been out some nights to catch some birds in extra ringing. We used both nets for waders and a big lamp for lamping, and the results have been quite interesting so far. This post will be focused only in the two Great Cormorants (Phalacrocorax carbo) we trapped by lamping.

Ageing
It is well known the fact that juvenile and subadult Great Cormorants have white feathers in belly, so both birds can be quickly recognised as immature birds. There's a lot of variation in the white pattern on the belly, that can also be affected by the moult. They have a partial postjuvenile moult that involves head, mantle and some breast and belly feathers. The big variation was very noticeable in our birds:

Our birds were both first-years (EURING 3). The first bird (darker) was not an EURING 5 because there was no sign of the first complete moult (all wing juvenile), and wing feathers were very fresh. Given that variation in the belly, ageing first-year / second-year individuals in the field at this time of the year, especially on resting birds, can be quite tricky. Signs of the complete moult or worn flight feathers would be the best criteria.

Subspecies identification
Two subspecies have been traditionally recognised in Europe: P.c.carbo and P.c.sinensis. The separation of both subspecies is not straightforward, and many literature about the subject appeared the last decade. Among all the research that was done, Marion & Le Gentil (2006) studied haplotypes and they found 3 different groups, corresponding to the two mentioned subspecies and the a putative new taxa, that they named 'Phalacrocorax carbo norvegicus'. As far as I'm concerned, the subspecies status is not fully accepted yet. Quoting the autors: 'norvegicus' would be "mainly present in the Nordic range (Norway, but also on the coasts from Sweden to Brittany)".

Danish and swedish breeding colonies were known to be from the Continental subspecies (sinensis), and the presence of a North Atlantic (carbo) is very unlikely in Falsterbo. Nonetheless, as it has been suggested, 'norvegicus' could be present, and indeed, the closest breeding colonies to Falsterbo peninsula are localited in coastal areas, where (according to Marion & Le Gentil 2006) 'norvegicus' is more prone to breed rather than sinensis, which usually breeds in trees.

I haven't been able to find any biometric data on the literature for 'norvegicus', but following again the same Marion & Le Gentil, 'norvegicus' should be similar to carbo in many aspects. Actually, Norwegian populations were meant to be from the North Atlantic subspecies. Bill measurements were taken (bill length from the tip to the first feathers, and bill depth in the narrowest part in the middle), but as the bill sizes depends also on the sex, there's too much overlap for this measurements to be significant. Gular pouch was measured in both birds with the pictures taken, assuming possible deviations due tue the position of the bird. Nonetheless, results follow the notes that were taken in the field.

The first bird have a rather acute angle, around 60º, what suggests a possible 'norvegicus' to me. Also, the bill was strong, and the bird was quite big and bulky. 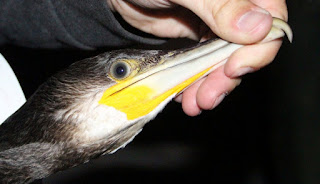 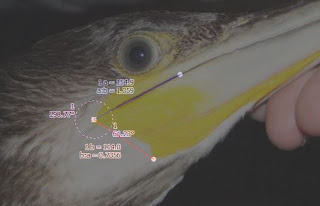 The second bird has a gular pouch angle around 70º, which is good for a sinensis. Also, the bird was smaller and the bill was slimmer than the first bird. 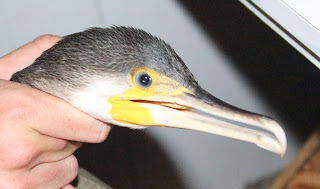 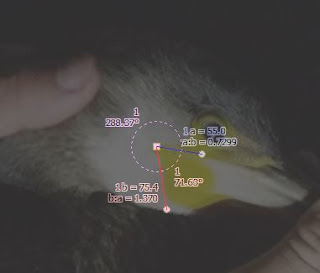 More research should be done to confirm 'norvegicus' as a new Great Cormorant subspecies, and to take more biometric data to allow their identification without genetic analysis.

Acknowledgements
To Timmy Micallef for allow me to post his pictures and for his decisive help during lamping nights, as Emil Lundahl and Erik Sjögren did too, and to Caroline Sjöström and Michael Tholin for the visit during the second night, providing the name of this post.