I think February is quite a good time for this short trip to Gallocanta and surroundings. Cranes (Grus grus) invade Gallocanta lagoon every winter in flocks of thousands; they eat on the field around the area and they come, at dusk, to sleep on the laggon. That is an scenario that I truly recommend to everybody. 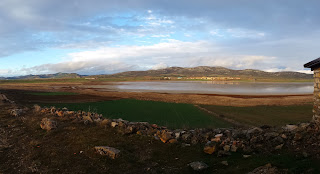 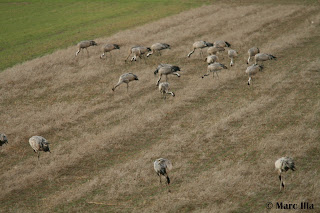 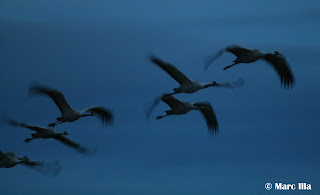 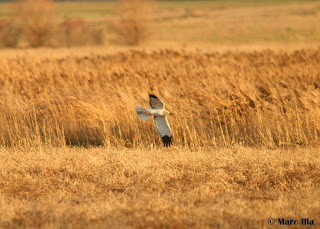 I was preety enthusiastic about the few Iberian hares (Lepus granatensis) we saw, I had only seen europaeus so far and they actually look very different! 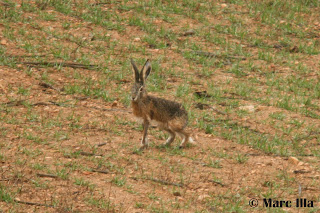 If you are lucky you can also get to see a flock of Black-bellied Sandgrouses (Pterocles orientalis), a rather endangered species in Catalunya, especially for habitat loss, but still with good areas in Aragón.

Back to the Cranes, the moult strategy is something that has kept me always interested about. It is well known that many non-passerines species have very different moult strategies rather than the usual passerine strategies. In the Eurasian Crane (Grus grus), the postjuvenile moult is partial, and involves some head, neck and body feathers. Thus, ageing first-winter individuals in the field is quite easy: they still have many juvenile feathers.


Cramp et al. (1979) also says first-winters have a winter moult, between December and May, which is partial, and also involves head and neck and some body feathers, tertials and upper wing coverts. Then, after their first summer and to the second winter, individuals can still be aged on the juvenile primaries (not moulted yet) and, as they moult slowly, they tend to have more retained feathers in head, neck and body than adults. It is estimated that flight feathers are moulted for first time on the 3rd summer, although some birds started it in the 4rth. After that moult, adults replace flight feathers every 2 to 4 years, depending on different factors like breeding success. The flight feather's moult is simultaneous, like Wildfowl, and it takes a period of a few weeks being flightless. Some strategies for the flightless period are suggested, from moulting at the same time as breeding (already with running chicks) to Cranes reported moulting while hidden in a reedbed. 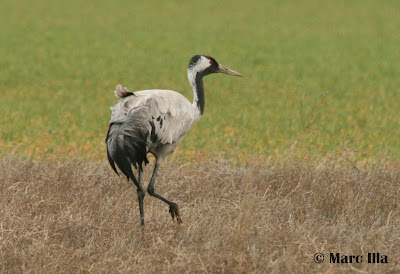 Notice the difference in wear in the two adults below. The bird on the left shows no retained head, neck, body feathers, neither wing coverts (except for primary coverts), which suggest it is an adult that has been carrying the same flight feathers for some seasons!

Later on, I was surprised when I saw this adult in apparent secondary moult, but I guessed it was hurt or something. But when it flew, and as you can see below, it was actually moulting secondaries!! At least the gaps in both wings seems of the same size (involving the same feathers). Primaries look new (compare with the bird flying behind, which is the same commented above), and grown secondaries also look pretty new. An adult that started flight feathers moult and that suspended after finishing primary moult, and continued in the wintering grounds?? Maybe a moulting bird in the area that is not flightless anymore, but still hasn't finished the moult? 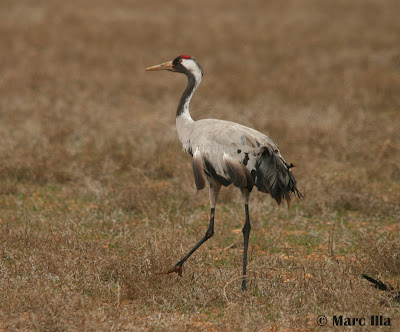 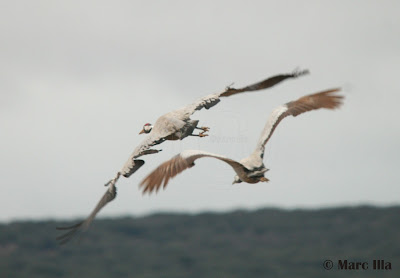 A trip to Aragón in winter deserves a visit to Gallocanta, but also to Belchite steppes. We had the chance to hear, and rather close, up to 5 Dupont's Larks (Chersophilus duponti) singing at dusk. For those interested in going there, remember to be respectful: Dupont's Lark is a really endangered species, especially because it is very sensitive to disturbance and habitat loss. 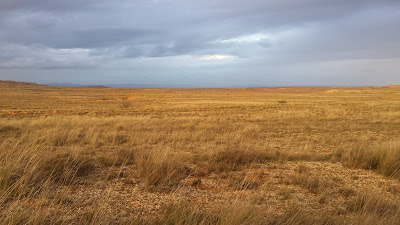 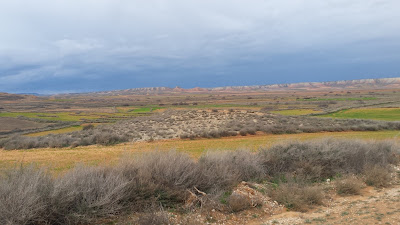 But as I was saying, and especially if you haven't gone yet, Gallocanta is a must-see for next winter! 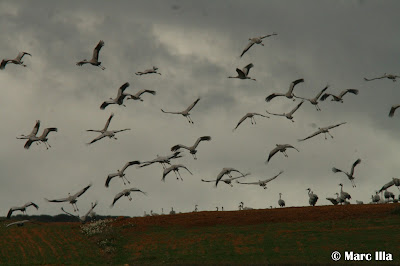