Autumn migration in the Western Mediterranean

Since I came back from Falsterbo I've been ringing in several places, mainly in my local ringing stations, a ringing weekend in Cap de Creus Natural Park in behalf of CCOW (Cap de Creus October Weekend) and a week in Illa de l'Aire (Menorca) joining on the autumn ringing season organized by SOM (Menorca Ornithological Society).

If I had to underline two impressions from the beginning of October in my area, I would say about the rather abundance of transaharan migrants on 'late' dates (not really late, but rather late in those numbers), since for instance Reed Warblers (Acrocephalus scirpaceus) were present almost anywhere I went (with water nearby)! Also, I had some very good days of migrating Stonechats (Saxicola rubicola), at least significantly better than last 5 years. Quite a good start back to Catalunya!
During the CCOW, we set up some nets in Jóncols valley, a dense scrubland, with the biggest bushes and scattered trees following a stream (that carried quite a lot of water due to recent rains!). We were ringing in several locations in the Cap de Creus Natural Park, reaching a total number of 1079 birds ringed. Our team was composed by Roger Jutglà, Xevi Rifà, Bet Font, Helena Rifà, Clara Teixidor and me. 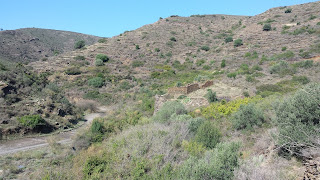 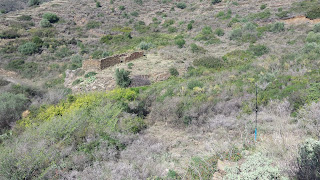 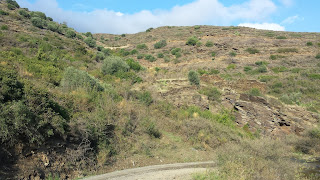 The most common species in this area, as migrating birds, are Robins (Erithacus rubecula) and Blackcaps (Sylvia atricapilla). Song Thrushes (Turdus philomelos) are also quite abundant, but apparently not in big numbers as in other places in the Mediterranean coast. Sardinian Warblers (Sylvia melanocephala) are also very common, but most of them might be local birds, since it's very common breeding in this kind of habitat, and most of them had quite extensive moults, including several primaries and/or secondaries. And as it happened in Menorca too, some finches with very extensive moults, like this Goldfinch (Carduelis carduelis) below. 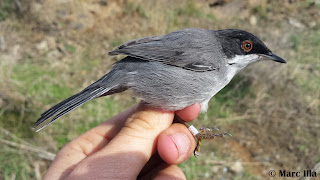 This Dartford Warbler (Sylvia undata) was also a nice surprise, probably local too, but we only detected a few individuals around. 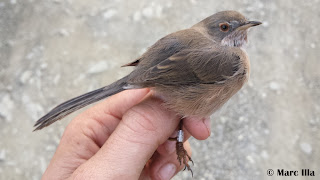 What it was not local for sure, and actually wuite a surprise too, was this first-year female Kingfisher (Alcedo atthis) caught while following the stream that runs through the ringing area. 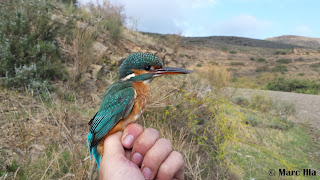 As special, we caught a Blackcap from Belgium and this Yellow-browed Warbler (Phylloscopus inornatus). In total, at least 5 YBW were detected in the Natural Park through the weekend, and more than 50 have been recorded in Catalunya during this autumn... 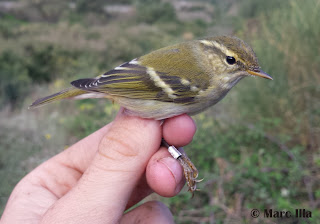 Then I moved to Illa de l'Aire, a bit south of Menorca, in the Balearic Islands. The Menorcan Ornithological Society (SOM) runs the standardised autumn ringing season for third year in a row. It's already my fourth time in the island, and first time in autumn. Thank you very much to all who make it possible year by year one more time!!! JJ, Karmele, Romain and me were the ringing team in the Island, with Santi coming for a visit a couple of days. We had a great time!, and a lot of interesting birds...! 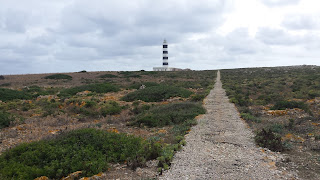 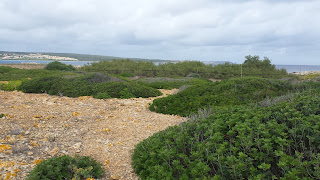 As in Cap de Creus, but especially more here, Robins (Erithacus rubecula) are the commonest migrants in the island. Indeed, this year turned out to be a very good season; already at Falsterbo when I was there and in ringing campaings in Catalunya and in the Balearics too. 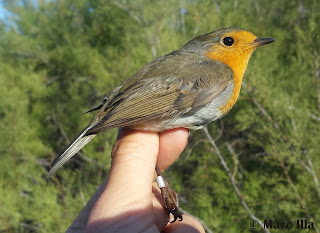 The season it's been good also for Song Thrushes (Turdus philomelos) and Dunnocks (Prunella modularis), although the latter is caught and seen in few numbers in the island. And sadly, a few Dunnocks were the closest I could get to a Siberian Accentor... 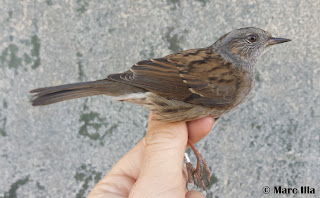 Other Thruses were also seen or caught, like some Redwings (Turdus iliacus) on migration, a Mistle Thrush (Turdus viscivorus) ringed, which was the first ringed in the island during autumn, and quite a lot of migrating Blackbirds (Turdus merula), with days with more than 20 individuals around the island. 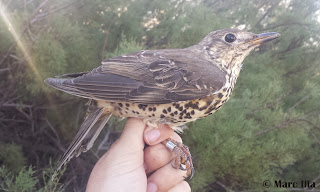 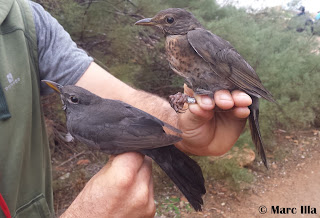 It has not been the best year for Firecrests (Regulus ignicapilla), but still are rather common migrants on this dates. Goldcrests (Regulus regulus) have been quite rare this season, I haven't seen any actually... 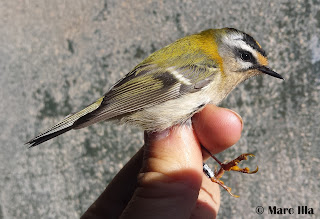 Best birds were a Lesser Whitethroat (Sylvia curruca) and another Yellow-browed Warbler (Phylloscopus inornatus), both rarities but regularly caught in the island; especially curruca, which is caught almost anually in both spring and autumn seasons. 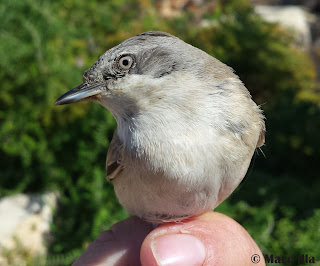 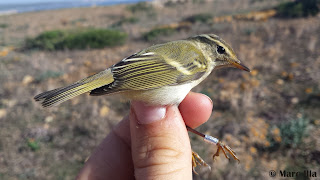 Once the campaign was finished and I was back to my area in central Catalunya, good numbers of both Black Redstarts (Phoenicurus ochruros) and Reed Buntings (Emberiza schoeniclus) were passing. 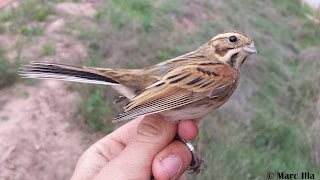 Visiting almost daily my local patch, it was a nice surprise to find a flock of 10 Penduline Tits (Remiz pendulinus) one day in the evening, that for sure arrived that same day. Minutes after I had a net up to target them, since they are rather scarce in the area and ringing them has provided a lot of interesting recaps between areas, and a rather high rate of foreign recoveries. Indeed, we caught quickly 9 out of 10 Penduline Tits around, since the last one was bouncing on the net but always sneaky enough to scape. This had already happened to my one with an Italian Penduline Tit in the same place, so we extracted the others and left that one alone. In the next round it was caught, and it was actually carrying a French ring!! 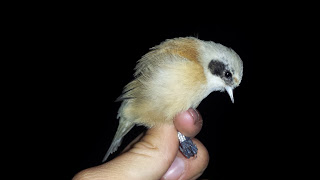 Being a first-year (EURING 3) it had to be ringed this same year. The recovery information has been quick (thank you Raül for the quick information flux), and the bird was ringed 13 days before, 435 km away, in Les Iles, Chateauneuf-sur-isere (check map below). It's already the third recap I get in my place from birds from this area between SE France and NW Italy!

And, as so many Yellow-browed Warblers were being seen everywhere, I was especially motivated to find one in my area. After quite disappointing hours searching in several days and several places, I could hear and see one at the same spot where I saw the last in the area, two years ago.
Posted by Marc Illa at 8:59 AM