One more autumn season in the Flommen reedbeds, already my 4th!
It's been a rather busy season, with many more birds than the previous ones, and other additional work delayed this post. But finally!!


Flommen ringing season is over after one of the best seasons in the 21st century: 4271 birds of 51 species have been ringed in the standardised ringing, above the reference number of 4258 birds (average 1980-2009). Also, almost 600 birds have been ringed in extra ringing in the same area.


Click here to check the seasonal total at Flommen for this year. 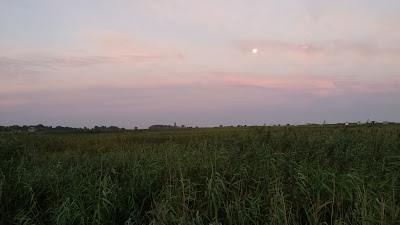 Since the beginning of the season it was noticeable the high density of different insect species in the reeds, significantly more than the previous seasons. The amount of food for many species is probably one of the reasons that explain this year’s high numbers, but also many species, such as Eurasian Reed Warbler (Acrocephalus scirpaceus) and Reed Bunting (Emberiza schoeniclus), both local breeding species trapped in the beginning of the season, have shown quite good breeding success with many juvenile birds recently fledged being trapped and ringed. 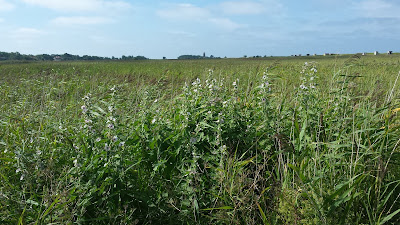 The weather has been quite good through the whole season, with a lot of sunny and rather warm days during most of August and September, and therefore it was in very few days when the ringing was cancelled, mostly due to too strong winds. Then, and in combination with the amount of food and the apparently good breeding season, one could expect a good total number of birds trapped we had.

Using walk-in-traps, we caught the anual record number of Water Rails (Rallus aquaticus), from all ages, including this very little black ones!! 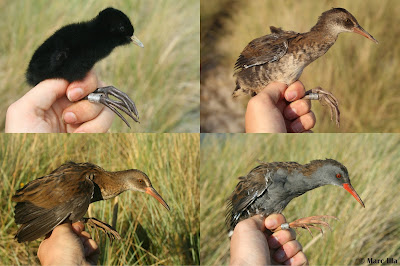 Walk-in-traps are also very useful to catch other 'walking' species, such as Pipits. In fact, by placing them on different places, especially on the beach or the trail in the reedbed, we caught several Tree Pipits (Anthus trivialis), Meadow Pipits (Anthus pratensis), a Red-throated Pipit (Anthus cervinus) and up to 11 Rock Pipits (Anthus petrosus) - only 3 of the latter species had been ringed at the Bird Observatory the last 50 years!!-. 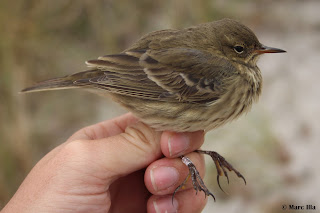 Most unusual birds this season have been: a Shoveler (Anas clypeata), a breeding female in the area that is only the second individual ringed of this species in the last 36 years, and first ever for Flommen, a juvenile European Stonechat (Saxicola rubicola) – first ever for Flommen - , a juvenile European Cuckoo (Cuculus canorus) – 2nd ever in the standardised ringing at Flommen -, a first-year female Marsh Harrier (Circus aeruginosus) – 2nd ever in standardised and for the Bird Observatory -, a first-year female Blackbird (Turdus merula) – 3rd ever for the standardised ringing at Flommen -, 30 Penduline Tits (Remiz pendulinus), 23 ringed and 7 recovered from other places, 2 Great Reed Warblers (Acrocephalus arundinaceus), the 57th ringed at Flommen since 1980 and a recapture from another place in Sweden, 3 Jack Snipes (Lymnocryptes minimus), 3 Spotted Crakes (Porzana porzana) and a Great Cormorant (Phalacrocorax carbo). 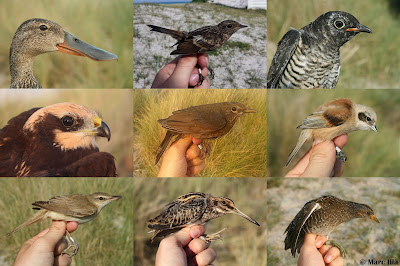 But the rarest bird was, without any doubt, the putative Stejneger's Stonechat (Saxicola maurus stejnegeri) (still not confirmed genetically). Don't miss the comparision made by Björn Malmhagen about the Flommen bird and an Stejneger's Stonechat from China; in the same dates the year before and same age/sex combination (first-year female). 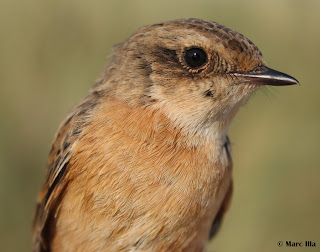 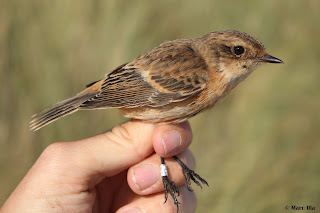 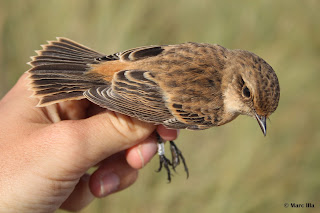 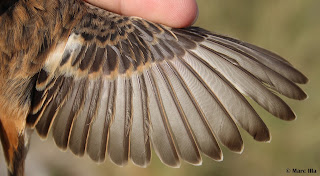 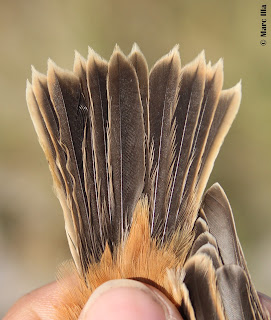 But the amount of migrating birds is what it really makes Falsterbo special. Some days, the sky gets full of migrating birds, usually calling energically (and making a lot ot sound!). You can get huge flocks of many species, with literally thousands of birds flying over!!! This year I stayed longer than other years, until the beggining of October, and those days are especially good to get great numbers of Woodpigeons (Columba palumbus) in migration. 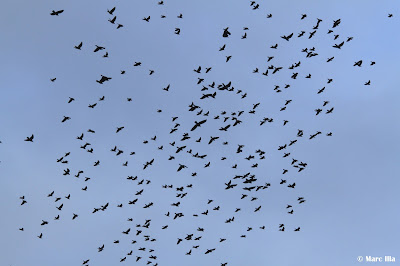 We had also a very special evening with several thousand Cranes (Grus grus) over the peninsula, this picture is taken from the door of the station. 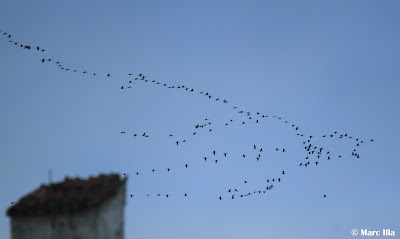 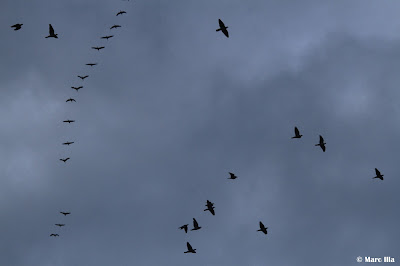 But you can really see a lot of species migrating in huge numbers. That evening, for example, hundreds of Song Thrushes (Turdus philomelos) and Mistle Thrushes (Turdus viscivorus) were migrating too. And these Redpolls (Carduelis flammea), that somehow look like flying fish! 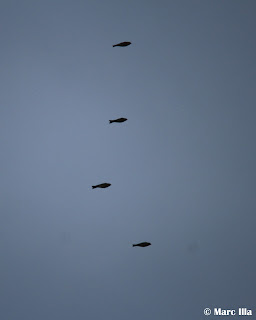 Such a rather common species across Europe as Sparrowhawks (Accipiter nisus) can be seen in huge amounts at Falsterbo. For instance, 21921 individuals have been counted in migration during 2016's season. Check Falsterbo Bird Observatory's webpage and click on 'Migration counts' to check numbers for other species. 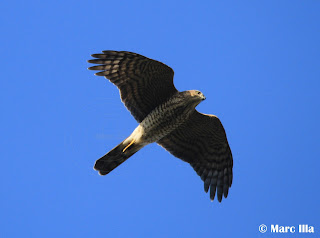 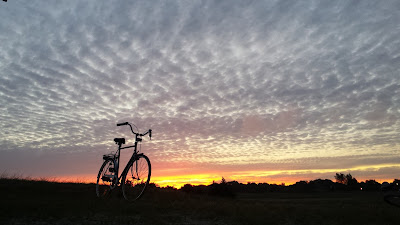