This time I had my New Year's celebration in Sweden, many thanks to Ingela to make it possible!!
We visited Värmland, a truly different view of what I was used as Sweden so far (I had only been around the Falsterbo peninsula), and with many similarities from what I remember from the trip in Finland during 2016. But of course that was in summer, and now the temperatures were 'a bit' lower, reaching a day of -14ºC,  and the day was rather short. 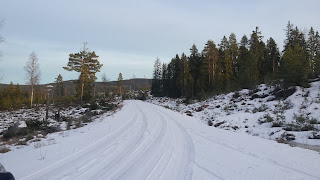 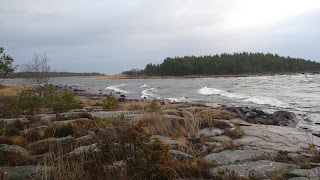 The first thing we did, still in 2016, was a bit of twitching. One of the 240 Siberian Accentors (Prunella montanella) seen in Europe during this last autumn had been seen daily in a feeding place in Lindesberg (more or less in the middle of Sweden), so we went to see it. A part from being a very nice bird, it sort of motivated me to see one in this year, after this episode that who knows if we will ever experience again...
On the way there, the first flocks of Waxwings (Bombycilla garrulus) showed up, and we had some stops to look at them. 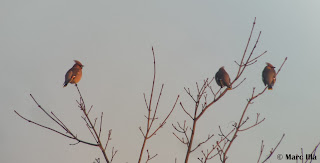 Once there, several birders were already looking for the bird. As I said, it had been seen in a garden with a feeding place; but not visiting the feeding, just hidden in the bushes behind close to the compost place. The bird had been seen briefly earlier, but it had been hidden after that. We had to wait... but it was rather entertaining to check some nominate Bullfinches (Pyrrhula pyrrhula pyrrhula) that were coming close to the feeding place. 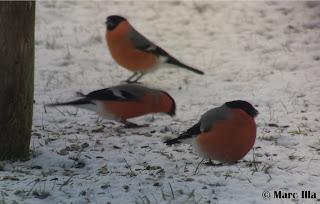 After quite a long waiting, the Siberian Accentor decided to show up, and let me take some record shots to have as a memory. Indeed, I prefered to look at it and enjoy it; we didn't know if it was going to disappear again! 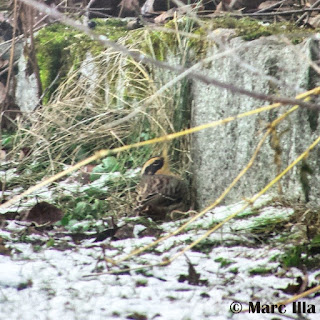 The following days, we focused on looking for owls. Indeed, in Finland I had only seen Hawk Owls (Surnia ulula). It was an apparently good breeding year (we could notice that seeing 20 Hawk Owls in Norway/Northern Finland without even looking for them, just from the road...), and several individuals have been recorded in places were they are not as usual in central and even southern Sweden, including some Danish records too. Thanks to this, we saw 6 different birds in different days, and some of them were very obliging... 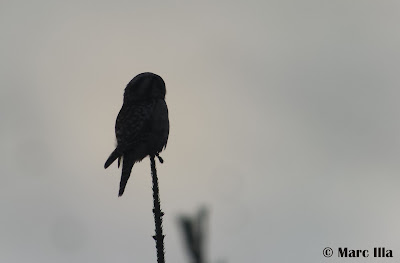 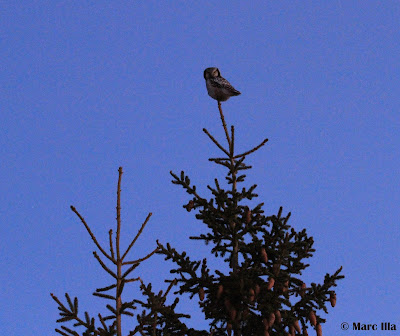 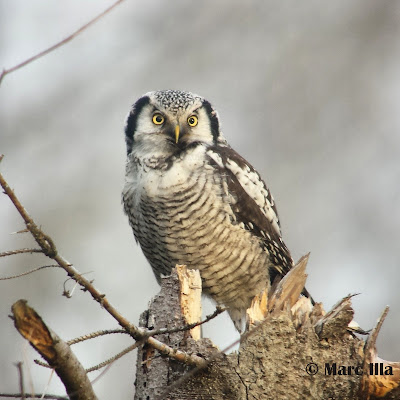 Watching them from all the angles and sometimes so close facilitated ageing. Tertials pattern seems to be quite realiable, and even possible to asses from a certain distance. Interestingly (but maybe not that surprisingly), we only saw adults in the forest (close to areas where they could be breeding), while 1st winters showed up in more unusual areas for the specias, where they are not even recorded anually.
One of the first target species that we manage to see well, and that I had actually never seen -after a miss in Finland-, was the Black Grouse (Lyrurus tetrix). First we flushed some individuals that we could see flying away and sitting on the top of some Pine trees in the distance, and although I was quite happy already with that observation, they decided to show much much better. At this time of the year, Black Grouses feed on buds in Birch trees (Betula pendula), and they can be quite easy to spot from the distance, and usually even from the main roads. 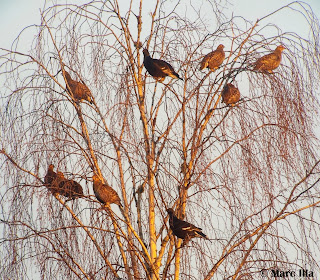 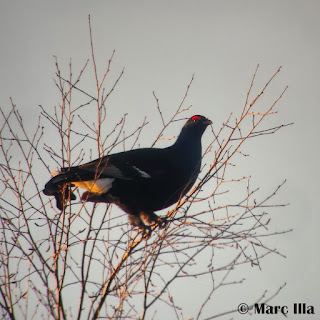 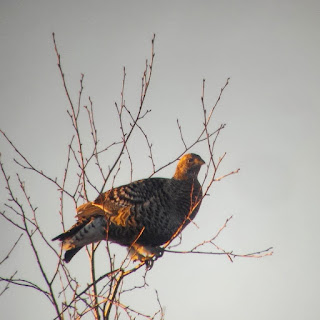 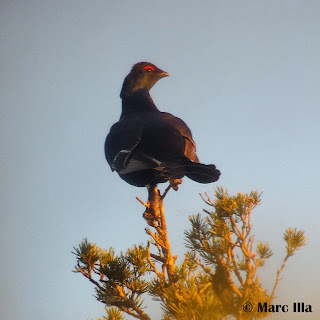 Finally we could see a Pygmy Owl (Glaucidium passerinum)! And also other interesting things for me, like Eurasian Beaver (Castor fiber), Moose (Alces alces), and several other interesting birds. Some birds in the middle of the forest might not be very used to people, allowing us to be very close to them, or even sitting in our hands to eat anything we were offering!, like it happened with this Scandinavian Willow Tit (Poecile montanus borealis). 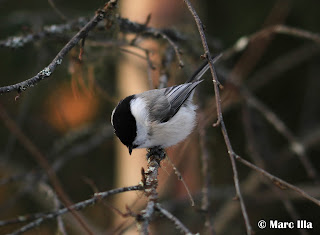 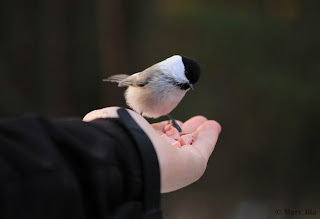 It was very nice too to have good views of nominate Dippers (Cinclus cinclus cinclus), that usually gather in flocks of around 30 individuals due to the ice.

Garden birding, mainly thanks to the numerous feeding stations for birds, can provide with many interesting species and rather big concentrations of birds. And many raritees show up in this places, just like the Siberian Accentor...

It was very nice and funny to be close to feeding flocks of Waxwings (Bombycilla garrulus). None of them ended up drunk! 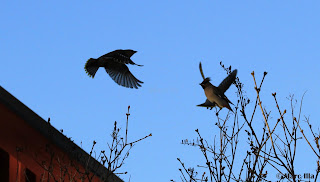 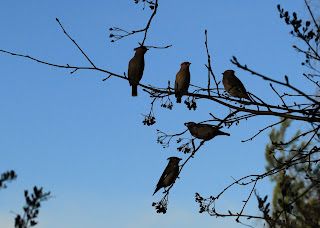 Already on the 3rd or January, we took the train following the swedish west coast, and we stopped in Vejbystrand to see the Red-necked Stint (Calidris ruficollis) that is wintering in the area. After following the one in Norway and the one in Iceland, it was very interesting to see this third first-winter recorded during 2016 in Europe. We had a bit of crappy weather, with a bit of rain and cold winds, but still we managed to see it quite properly. The pictures are just a memory though, but you can see some very good shots in artportalen.se. 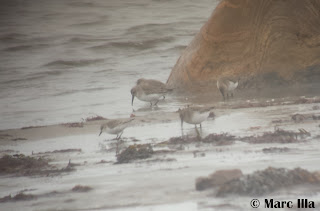 We followed the coast to the souther-western corner, Faslterbo, where we spent two more days. Thanks to Sophie, Lennart, Karin and Emil!
It was very nice to see the area in winter looking, and full of wildfowl that is quite scarce by the times I have been usually there in early autumn. For instance, several Whooper Swans (Cygnus cygnus) were around, and a very nice flock of around a hundred Greater Scaups (Aythya marila), together with Tufted Ducks (Aythya fuligula) and Common Pochards (Aythya ferina) was very interesting to look at in detail. 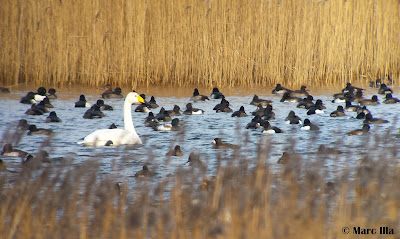 We could get quite close views of the flock, especially thanks to the strong winds that pushed them to stay in one of the very few corners protected from the wind. But yeah, it was very cold to stay there for long! 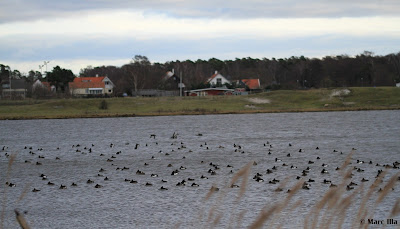 And of course, Flommen deserved a visit! 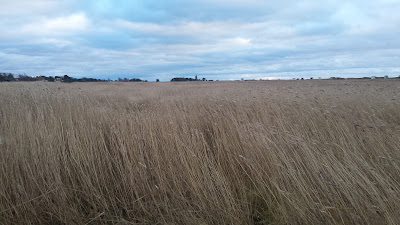