Since I started birding I've been focusing most of my hours and days in the field close to my place, in Central Catalunya. In practical facts there's an obvious reason to go there, since a relatively proper wetland in less than 10 minutes by foot from my bedroom. And despite you can't compare the place to a true birding hotspot, I have seen quite much interesting stuff and, above all, learnt a lot. These are some lines of experiences in my local areas during some last few days.

I came up with this thoughts the other day when I was extremely pleased watching the first Sandwich Tern (Sterna sandvicensis) seen in my area and in this part of Central Catalunya. Sandwitch Terns are common along the shoreline, fishing in the sea, and they can be seen all year round in the Mediterranean, where they both breed and winter. Nonetheless, inland sightings are very rare! So probably that's why I had never expected this species to show up here. Anyway, the morning of the 25th of March 2017 this individual showed up after an intense storm the previous night.
Every spring is different in migration terms! If I had to summarize what this spring season has been so far in my area I would point out the raptors. Due to wind, rain and other meteorological circumstances it has been a remarcable good spring for migrating raptors so far, with no less than 170 Short-toed Eagles (Circaetus gallicus), 2 Booted Eagles (Aquila pennata), 42 Common Buzzards (Buteo buteo), 6 Red Kites (Milvus milvus), 327 Black Kites (Milvus migrans), 46 Marsh Harriers (Circus aeruginosus), 1 Hen Harrier (Circus cyaneus), 35 Sparrowhawks (Accipiter nisus) and 5 Goshawks (Accipiter gentilis). Most of Black Kites were seen together in a big flock the 1st of April in the afternoon, when a Black Stork (Ciconia nigra) decided to pass by too. 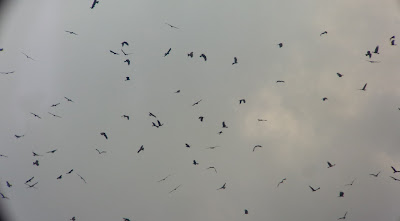 Also, White Storks (Ciconia ciconia) flocks have been quite regular. The latest flock spend the night between the 1st and the 2nd of April, and I could manage to see some rings the following morning, mostly from Germany but also 3 from Switzerland, 1 from the Netherlands and 1 from Sweden. 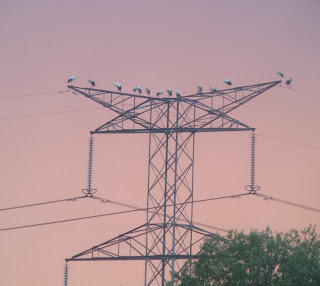 While reading the ring numbers I had very good light, which it was a good suport for getting most of the codes. After looking at them for a while, I realised of some plumage differences between individuals. When the information from the ringed individuals comes, it will be interesting to check if this ageing tips are correct!

Most of my ringing stations are making 5 full years of activity this year, and thus some interesting recaps are already possible to get. For instance this (at least) 5 years old Great Tit (Parus major), which was caught with her partner, also ringed the same day and also older than 5 years now! 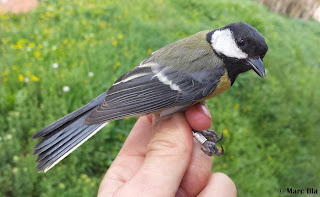 Blackcaps (Sylvia atricapilla) are probably the most common migrant so far in the area, with rather good numbers. 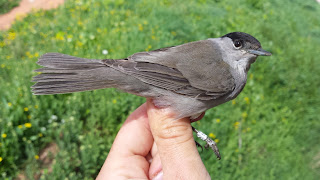 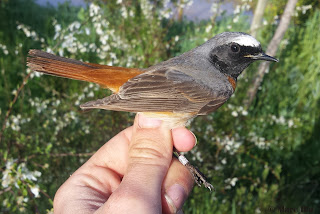 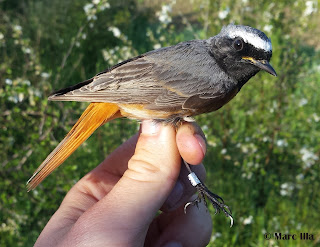 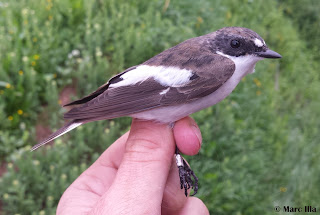 This Scops Owl (Otus scops) was also a nice surprise in the nets! 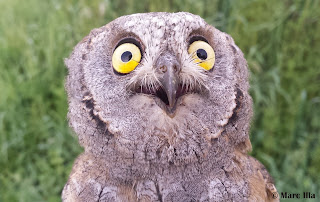 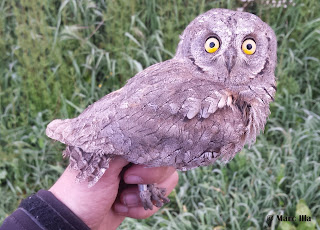 It was an adult (EUING 6), due to the relatively fresh flight feathers and their pattern, also in the tail. 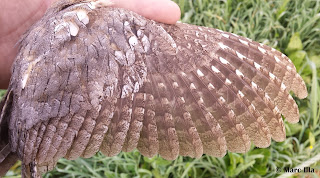 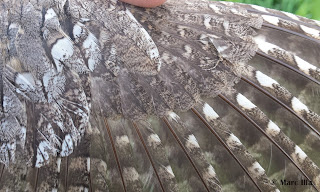 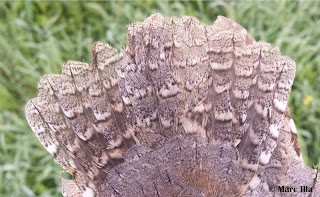 But local birding also allows to study in proper detail the local species, such as Woodpigeons (Columba palumbus).
Green Woodpecker (Picus viridis) was a nice bonus for these days, and indeed a species that I don't catch so regularly. 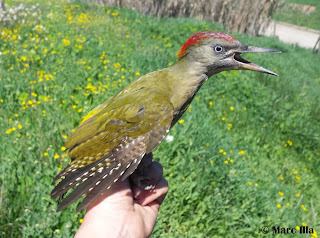 But probably the most local bird I had the chance to study was this Red-legged Partridge (Alectoris rufa) that somehow managed to get caught. A typical second-year (EURING 5), with the two outermost primaries still juvenile. 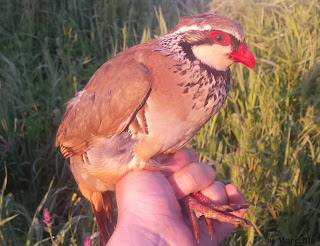 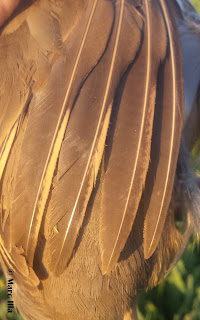 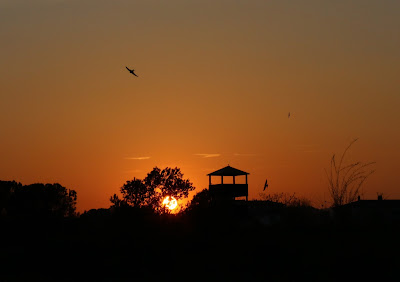