Late September is a great time to see lots of migratory birds, so... this was a great weekend to found something special.

SATURDAY 23-09-2012
On the morning, I went to Llobregat Delta, in Cal Tet and the Llobregat mouth, with Josep Bujons. It's a fantastic place to spect some waders and also some interesting passerines... The last week was so clowdy, a little weather-change that's good for migratory birds.
Althought it seemed to be a good day, it was not. Firstly, Josep Bujons and me went to Reguerons, a small pond in the middle of an agricultural area. Some days before, Raúl Bastida found there a Temminck's Stint... maybe we could found it again.

We started seeing some Common Wagbills (Estrilda astrild) flying all around. Then, when we arrived in the pond, we could see some waders: a Common Greenshank (Tringa nebularia), some Wood Sandpipers (Tringa glareola), Green Sandpipers (Tringa ochropus) and Common Snipes (Gallinago gallinago). Later, we went to the other side of the pond. The Temminck's Stint (Calidris temminckii) was there!, a juvenile, close to a Dunlin (Calidris alpina) and 4 Bluethroats (Luscinia svecica).

At 10 o'clock we went to Cal Tet. We didn't find any shorebird in the first 'good' places, and we also saw a Willow Warbler (Phylloscopus trochilus). Only 1!
L'Arana beach, one of the best sites to see waders in Llobregat Delta, was almost empty. Only 2 Curlew Sandpipers (Calidris ferruginea), 4 Dunlins (Calidris alpina), 13 Sanderlings (Calidris alba), 2 Common Ringed Plovers (Charadrius hiaticula), 2 Whimbrels (Numenius phaeopus), 2 Grey Plovers (Pluvialis squatarola) (1 still with breeding plumage), 2 Common Greenshanks (Tringa nebularia) and 2 Spotted Redshanks (Tringa erythropus) in winter plumage. In the pine wood we only saw 7 trochilus and 2 Pied Flycatchers (Ficedula hypoleuca). It was a bad day for waders and for passerines...

Cal Tet was full of Eurasian Coots (Fulica cristata) and we could see only a few ducks. Despite some Mallards (Anas platyrhynchos) and Gadwalls (Anas strepera), only 1 Northern Shoveler (Anas clypeata), 7 Red-crested Pochards (Netta rufina), +30 Common Pochards (Aythya ferina) and +10 Eurasian Teals (Anas crecca). One of this creccas was 'orangish', you can see a photo below. 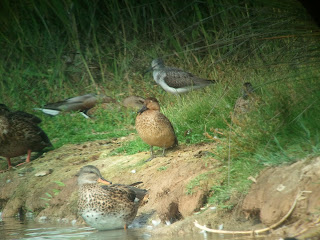 Finally, we could see 3 Common Redstarts (Phoenicurus phoenicurus) and a few trochilus more... but it was a light migration day.

SUNDAY 24-09-2012
I went with Josep Ramoneda to Aiguanegra volcano, in La Garrotxa Natural Park. There, Fran Trabalon realizes a raptor census during 32 days of postnupcial migration. It's a great place to see some diversity and quantity of raptors migration, and also storks. 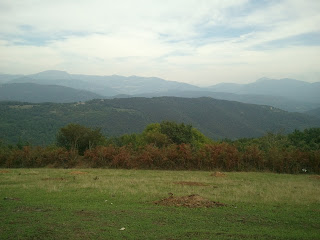 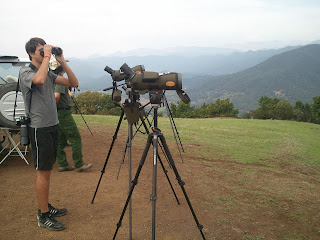 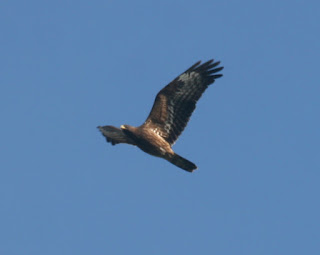 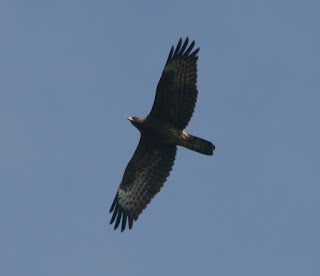 Another bad day for passerines, with only 5 Tree Pipits (Anthus trivialis), at least 7 Yellow wagtails (Motacilla flava) and a Pied Flycatcher (Ficedula hypoleuca).
Only the raptors 'saved' this migration weekend...
Posted by Marc Illa at 1:42 PM