White Stork and some 'new' birds

This morning, Jordi Comellas saw a White Stork (Ciconia ciconia) in l'Aiguamoll de la Bòbila arriving in 'migration' and stopping to eat something. A few hours later, when I left the school, I tryed to found it. The Stork was there, eating between some Grey Herons (Ardea cinerea), 3 Little Egrets (Egretta garzetta), the Great Egret (Casmerodius albus) and also the Purple Heron (Ardea purpurea).

Here is a scarce bird, seen only in migration. Some years is easy to see big migration groups (usually up to 100 birds) between the last August's week and the first week of September. Out of this dates, is an accidental bird.

The greatest thing was that the White Stork was ringed! It was an octagonal ring, but was too dirty to can read the code... but yes the EURING code, what indicates in which country was ringed the bird. This code was DEW (Helgoland / Wilhelmshaven), so the Stork was German! 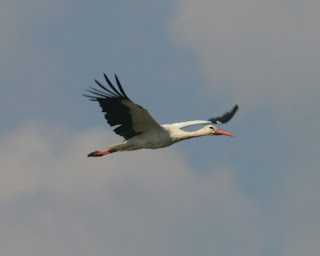 
L'Aiguamoll de la Bòbila act as a feeding and short-stopover site for migratory birds. It's diffucult to see big concentracions of passerines because the typical stopover is about 1-3 days.

I will continue expecting some Bluethroats these days...
Posted by Marc Illa at 1:09 PM