I passed last weekend ringing in my local patch, l'Aiguamoll de la Bòbila, where I usually ring birds. During last week I saw only a few migrants, it isn't a spectacular spring (for the moment...), but I decided to try...

Saturday morning started with the first Scops Owl (Otus scops) trapped there. Last night I was playing some calls in order to try to atrract this male, that was singing there for some days. 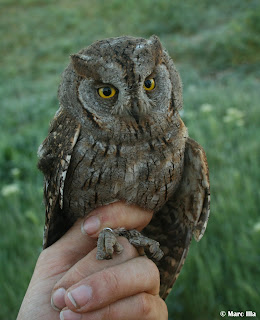 The first Great Reed Warbler (Acrocephalus arundinaceus) of the season, a male that arrived in 11th April, was ringed too. For the moment, he is non-stop singing although he is absolutely alone; it seems that the rest of local arundinaceus will be still coming... 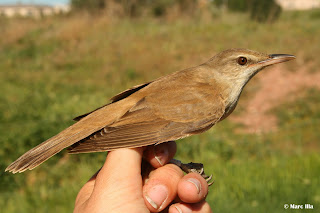 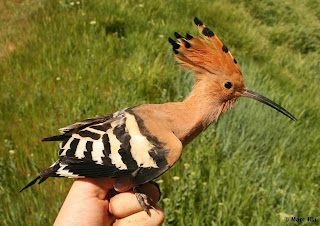 So, in spring, 2cy (EURING 5) and adults (EURING 6) can be recognisable. 2cy show some abrasion in primaries and external secundaries. Usually, tertials and ¿2-3 innermost secundaries? are fresh. Tip of P9 is another criteria: more pointed in juveniles and almost square-ended in adults. Tail is another good thing: more abraded in 2cy birds and with different kinds of white patches. I reccomend read Javier Blasco's work for more information and better photos. 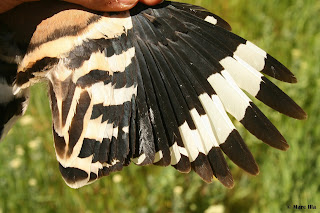 The afternoon was quite windy and I caught 2 Reed Warblers more and a White Wagtail (Motacilla alba).
The best part was a good Barn Swallows (Hirundo rustica) flock, as usually with a few Sand Martins (Riparia riparia), that decided to sleed on the reedbed. I managed to trapped some of them using my mobile phone playing Barn Swallow's song. In total, 28 birds were catched in a single net.

Sunday's morning started also as well as Saturday's. Another and absolutely unexpected Scops Owl was waiting on the nets... 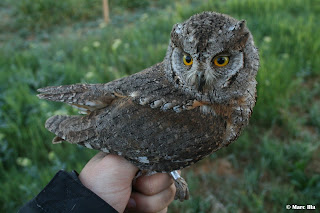 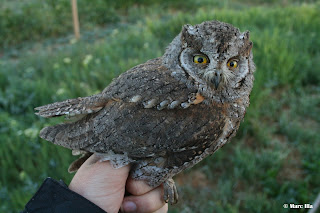 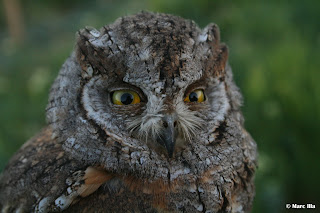 But the biggest surpise was later, when a Woodpigeon (Columba palumbus) was captured in one of the nets. I had never ringed this species, so I was really happy ;). 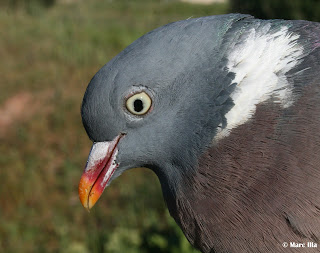 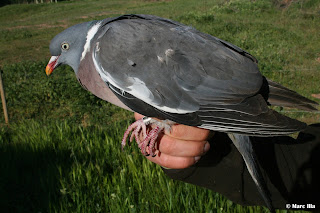 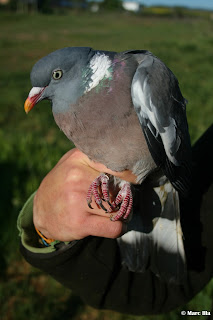 The last round in midday also produced another nice capture: a Magpie (Pica pica) was trapped in the same net where in Saturday I caught the Hoopoe. Good! 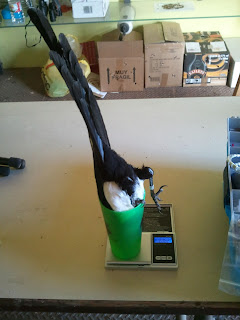 Sunday's afternoon was so quite, with a couple Tree Sparrows (Passer montanus) as the most interesting birds. When I started to see some Swallows looking for a place where to roost, I turn on my phone to attract them. In total, 10 Barn Swallows were trapped. It seems that this ringings in the swallows' roosting can be quite interesting if I have time to do it during some days... I really wish capture a foreign swallow ;)
A future post will include more information about Scops Owl's and Woodpigeon's aging... I don't have enough time to include these things in this post... and it needs time and good explanations.
Posted by Marc Illa at 2:15 PM