In the last post I told about Balearic bird subspecies, but another very interesting endemic fauna are the reptiles. Lilford's Wall Lizards (Podarcis lilfordi) and Ibiza Wall Lizards (Podarcis pityusensis) are two very interesting endemic species. The first one, the theme in this post, lives in some small islands and rocks around Menorca and Mallorca. The second one, pityusensis, lives in Ibiza, Formentera and some small islands around. Both of them have lots known subspecies, each one endemic of every small island.

This high variety is consequence of the separation between the islands and small islands that are partof the Balearic archipelago. Therefore, the most separated small island is Illa de l'Aire, and its endemic subspecies of Lilford's Wall Lizard, Podarcis lilfordi lilfordi, its considered to be the first one to separate from the antecesor form. This subspecies is quite 'famous' for its amazing colour: black on upper parts and deep blue on under parts, and for be the Lizard's population with the highest density in the world. 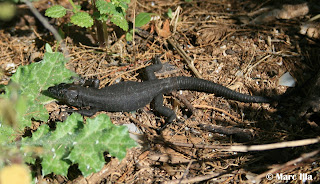 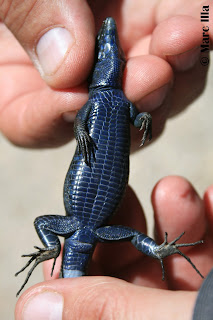 Actually, there are lots of Lizards around whole Illa de l'Aire and they are extremely common everywhere. Just see what happens if you leave food on the floor:


Their colour is something strange, and with no explication for the moment. Their extreme confident is probably consequence of the lack of predators, and humans are not a clearly threat for them. During my stay in l'Illa de l'Aire, we were living together. As you can see in the video, it was made very close to the ringer's house.

I also have the luck to meet Valentín, an expert herpetologist that has been studying Lilford's Wall Lizards for many years. He was realizing some behaviour experiments with different subspecies with some assistants, and I managed to learn some interesting things about. I really want to read their results!

Another interesting endemic, closely related to Lilford's Lizard, is the Dead Horse Arum (Dracunculus muscivorus). The flower smells very bad, like descomposed meat, in order to attract flies (in charge of the pollination).