Last weekend I was ringing at Aiguamolls de l'Empordà Natural Park, participating in a spring campaign that starts on March and finishes by late May. 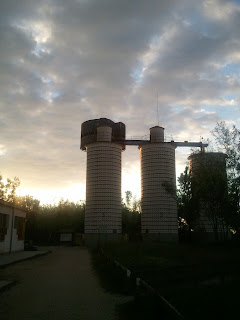 The strong passage of Reed Warblers (Acrocephalus scirpaceus) occurs on early-mid May here, so I was psychologically prepared to ring lots of them. As it was to be expected, we trapped more than 70 scirpaceus in Saturday morning and a total of 100 birds, not big numbers but quite good. This year, because of the winds, Wood Warblers (Phylloscopus sibilatrix) are quite common in the typical sites although the fantastic squall is far away. In this ringing station sibilatrix are ringed nearly every day. 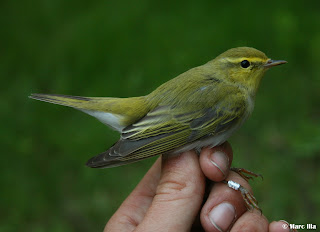 It's also a good time for Grasshopper Warblers (Locustella naevia). We heard some birds singing from bushes and we trapped one of them. 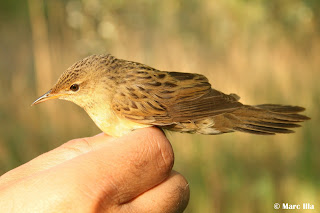 Flycatchers are also quite abundant these days. I was compulsory to confirm every Ficedula as a hypoleucos... despite the fact that all albicollis seen last week seemed to be already gone, I expect the possibility to see one. 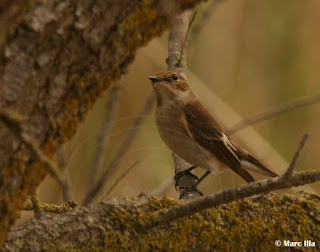 We saw some Squacco Herons (Ardeola ralloides) in the Matà area, and also some Hobbies (Falco subbuteo), 4 Gull-billed Terns (Gelochelidon nilotica) and a Collared Pratincole (Glareola pratincola). Not rare birds, but also not fairly common. 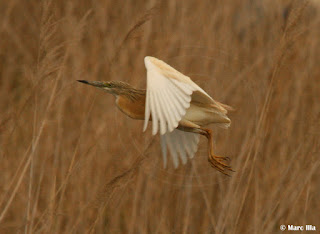 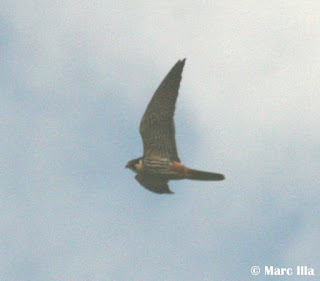 In midday, we take advantage of the opportunity to go to another birding sites close to the ringing station. We found a fantastic field by chance, just beside the road. There were lots of Whiskered Terns (Chlidonias hybridus), and between him, 3 White-winged Terns (Chlidonias leucopterus)! A really beautiful bird to see. 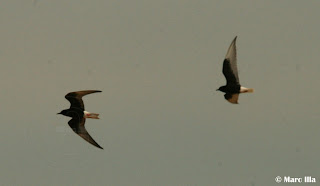 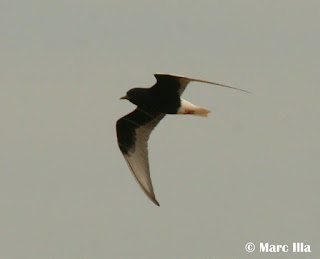 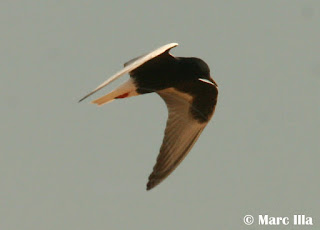 Still happy for the WWTerns, we found an adult male Red-footed Falcon (Falco vespertinus) in one of the typical places: La Gallinera ricefields. 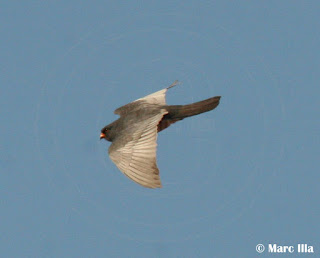 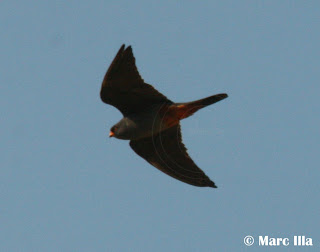 A Great Snipe (Gallinago media) was found by Àlex Ollé very close to the ringing area on Friday. With Bernat Ferrer (who went with my all weekend) and Ponç Feliu, we tried to see it on Sunday. Bad luck this time, we only say Common Snipes (Gallinago gallinago)... some Ruffs (Philomachus pugnax), Wood Sandpipers (Tringa glareola), Black-winged Stilts (Himantopus himantopus), Common and Little Ringed Plovers (Charadrius hiaticula and dubius), and 2 Little Stints (Calidris minuta).
Posted by Marc Illa at 3:20 AM