It's the third year in a row that, with some friends, I'm going to Ebre Delta in December. After the great success last year, I was extra motivated to find a ot of nice birds and to have a great time.
Sadly, the usual crew was affected by university stuff, and Josep, Joan and Ferran couldn't come. So, this year, we have gone just Bernat and me. 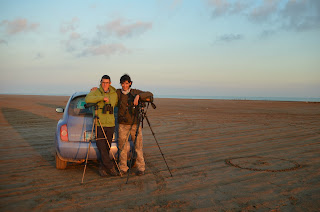 We arrived on Friday morning and we went straight on Sant Antoni saltpants, a typical place for waders and where a Long-tailed Duck had been observed some days ago. We weren't lucky with the Long-tailed, but we enjoyed a big flock of Dunlins (Calidris alpina) (526 birds), with some Sanderlings (Calidris alba) (126) and Little Stints (Calidris minuta) (69) mixed in. As the first surprise, a Red Knot (Calidris canutus) was also there. Knots are scarce during the winter, but there're always some in the Ebre Delta every year. As always, we saw a lot of Redshanks (Tringa totanus) (122 to be concise), Greenshanks (Tringa nebularia) (22), Grey Plovers (Pluvialis squatarola) (44), Kentish Plovers (Charadrius alexandrinus) (39), Turnstones (Arenaria interpres) (10)... 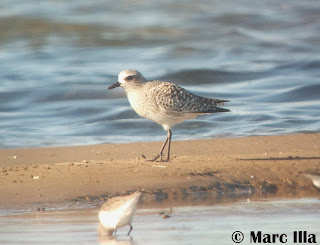 Then, we drove along the Trabucador beach. There was no wind, and the sea was really calm, perfect for seawatching. We started seeing 2 Bonxies (Stercorarius skua), and soon we find a Razorbill (Alca torda). In the usual place, inside the Alfacs Bay, we saw a flock of 18 Red-breasted Mergansers (Mergus serrator) eating, and as always, it was full of Crested Grebes (Podiceps cristatus) and some Black-necked Grebes (Podiceps nigricollis).
We were stopping in random places in the middle of the beach, just because of 'birding feelings'. We had got success in every stop when we decide to do it again. For first time, there was nothing on the sea... but suddenly, a Red-throated Diver (Gavia stellata) appeared, flying, just in front of us. I saw it pretty well with my scope when it decided to dissapear in the sea. This was probably the best moment of the weekend!

In the afternoon, we went to Alfacada, another typical but fantastic place. Looking at the sea, 11 Common Scoters (Melanitta nigra), another Bonxie (S.skua) and 1 Black-throated Diver (Gavia arctica). 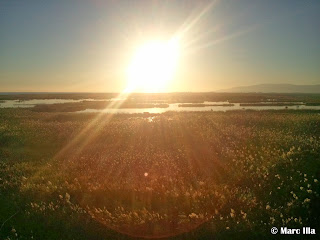 The day after, on Saturday, we started early in the morning walking around some beaches. We saw lots of Reed Buntings (Emberiza schoeniclus), and sadly nothing special was mixed in. Nonetheless, we saw about 40 Lesser Short-toed Larks (Alaudala rufescens) displaying. During all morning we heard shots because it was a 'hunting day'. All the lagoons were almost empty, so we decided to check the see again.

We found the firsts Melanittas soon, 3 nigra swimming close to the beach we checked. We went again to the Trabucador beach, and we found one Red-breasted Merganser more (so 19). We walked to Punta de la Banya, where all ducks go when there're hunters around. All birds were too far, but at least we saw 39 Audouin's Gulls (Larus audouinii), a regular wintering species in the Ebre Delta and the southern coast but always in small numbers. We decided to spend the afternoon looking for the Pacific Golden Plover that has been in the Delta since last August. It would had been nice to see it again, already in winter plumage, I just saw it when I was ringing in the Delta on September. Durint the last quick look at the sea, we found a really nice Velvet Scoter (Melanitta fusca), relatively close to the coast.

We didn't find any Pacific Golden Plover during the afternoon, but the views of the sunset in the ricefields, with lots of Calidris (basically Dunlins) flying, calling and running around were so nice. 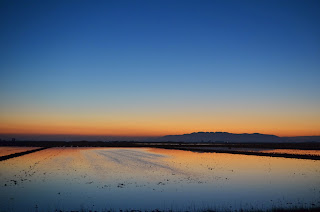 Sunday was the last day, so we decided to start as early as possible to avoid hunters at least for some hours (yeah, two hunting days in a row...). We started at Alfacada observatory, with big flocks of ducks in the lagoon. There was just 1 Common Scoter in the sea, and we saw also 1 Bonxie. I checked carefully the flock of 188 Greylag Geese (Anser anser) that was resting on the beach, but anyone of them looked weird. The most unexpected bird was a Black-winged Stilt (Himantopus himantopus), really scarce in winter in Catalonia but with a few birds wintering every year in the Delta. 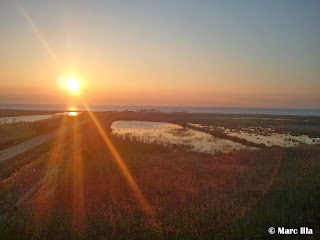 When first hunters arrived, we decided to go again to do some seawatching. We found again the Velvet Scoter in the same place, as well the 3 Common Scoters we had seen the day before. Then, we find a new group of 9 M.nigra. We did a quick visit to Riet Vell, where we saw some nice Bluethroats (Luscinia svecica), and also to Encanyissada ponds. 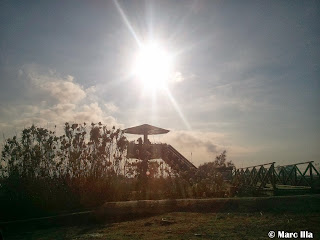 Already in the midday, we went to the northern part, Fangar Bay, to look for some waders. We found quickly a big flock of some species: Dunlins, Sanderlings, Redshanks, Grey Plovers... and between them, 6 Red Knots!
We go back to the Velvet Scoter's place, and it was still there. This time, followed by 9 Common Scoters more, an unexpected Parasitic Skua (Stercorarius parasiticus) (also scarce but regular in winter) and 1 Black-throated Diver (Gavia arctica). As we had seen so many birds in the sea, we went to another beach. There, we found 9 Common Scooters more (I don't think the same flock was following me...). The sun was disappearing when we went to La Tancada laggon, where lots of Flamingos (Phoenicopterus roseus) roosts, to do the 'stardardised count'. We finally managed to do it: 4183 birds. 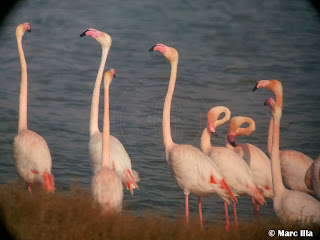 Already in the dark, we drove back home. We had a really nice birding weekend, and we also found lots of friends that did everything greater. As I said last year, 'Let's see if we can do thi every December!'
Posted by Marc Illa at 2:11 PM