My winter holidays had already started! Last days I've been ringing and birding aroud my hometown.
My feeling is that, this year, there are less Fringillidae species than other winters. Actually, I've counted about 600 Chaffinches (Fringilla coelebs) less than 2012, but the numbers are on the average for a normal winter. As you can see, last winter was specially a good year, with also lots of Bramblings (Fringilla montifringilla) everywhere (this year I've just seen one).
Looking for Brambling's sightings in ornitho.cat, I've generated these maps: (click to enlarge) 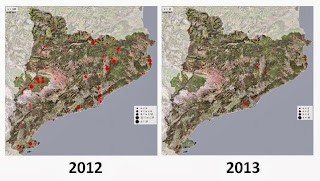 The sightings are extracted from the period 1st October - 25th December in every year. I've also added 2011 and 2010 in the next analysis:
Also, as Marcel Gil pointed out, in Falsterbo they had record numbers of ringing and migrating Siskins (Carduelis spinus), but in Catalonia we have just seen a few. Millions of them might be on the way, somewhere in central Europe!, but they hadn't reached Catalonia yet.


On the other hand, at least in my area, there are obviously more Chiffchaffs than other years. In my usual ringing places, I've already trapped more collybitas than the last year during the whole winter!

Last year I also started to ring in some roostings. My main targets were (and still are) Reed Buntings (Emberiza schoeniclus) and Yellowhammers (Emberiza citrinella). I've found a new place for schoeniclus and I've ringed about 40 these days. And I retrapped one with an Spanish ring! (ICONA ring; I still don't have any information about when and where was ringed). 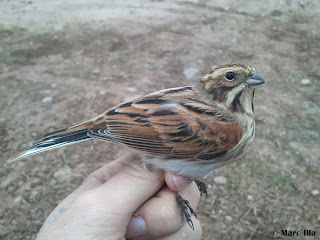 Yellowhammers are sleeping in the same roosting as every year, a small reedbed in the middle of a big dry lands area. They prefer a corner without water on the floor and with some bushes around.

There was a flock about 40 Meadow Pipits (Anthus pratensis) close to the reeds and I tried to play some calls close to a bush surrounded by nets. I finally trapped 3!, all of them 1st winters. 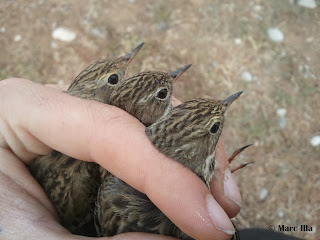 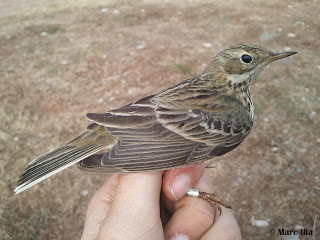 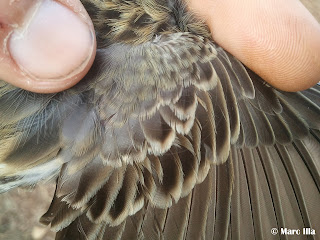 The biggest surprise came on 17th December, when while I was moving from a schoeniclus roosting to the yellowhammer's place, I received a call from Sergi Fernández. He said that was just found a Mergus in a big lake in a public park in Manresa. I went straight to that place and I could see it just after arrive: a Goosander (Mergus merganser)!, that is a rarity in Spain. 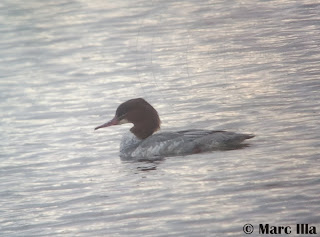 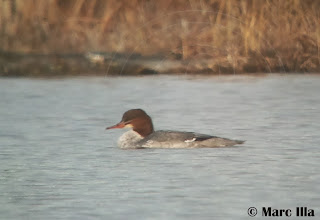