Last year I posted about the June's 'turning point', that produced many interesting sightings and nice birds to ring.

This year, June has started really good, as 2013. We had pair of Little Bitterns (Ixobrychus minutus) flying around the reeds but I haven't seen them for a while. Maybe they're on the nest...
We've seen also many other nice species for the place, as Crested Tit (Lophophanes cristatus), Booted Eagle (Aquila pennata), Egyptian Vulture (Neophron percnopterus), Water Rail (Rallus aquaticus), the traditional June's Black-headed Gull (Chroicocephalus ridibundus)... and some other stuff.

Last Monday we finally managed to ring during the morning. After the experience last year, we expected lots of birds, and the main part of them would be House Sparrows (Passer domesticus). And actually this was the case, we trapped 127 birds during the morning, and 77 were House Sparrows. We decided to 'make an effort' and ring all of them, if it's true that they're disappearing in some places, we should study them as any other species. Fortunately, Lídia was there to help me to take it easy, and to provide her luck to ring nice birds! 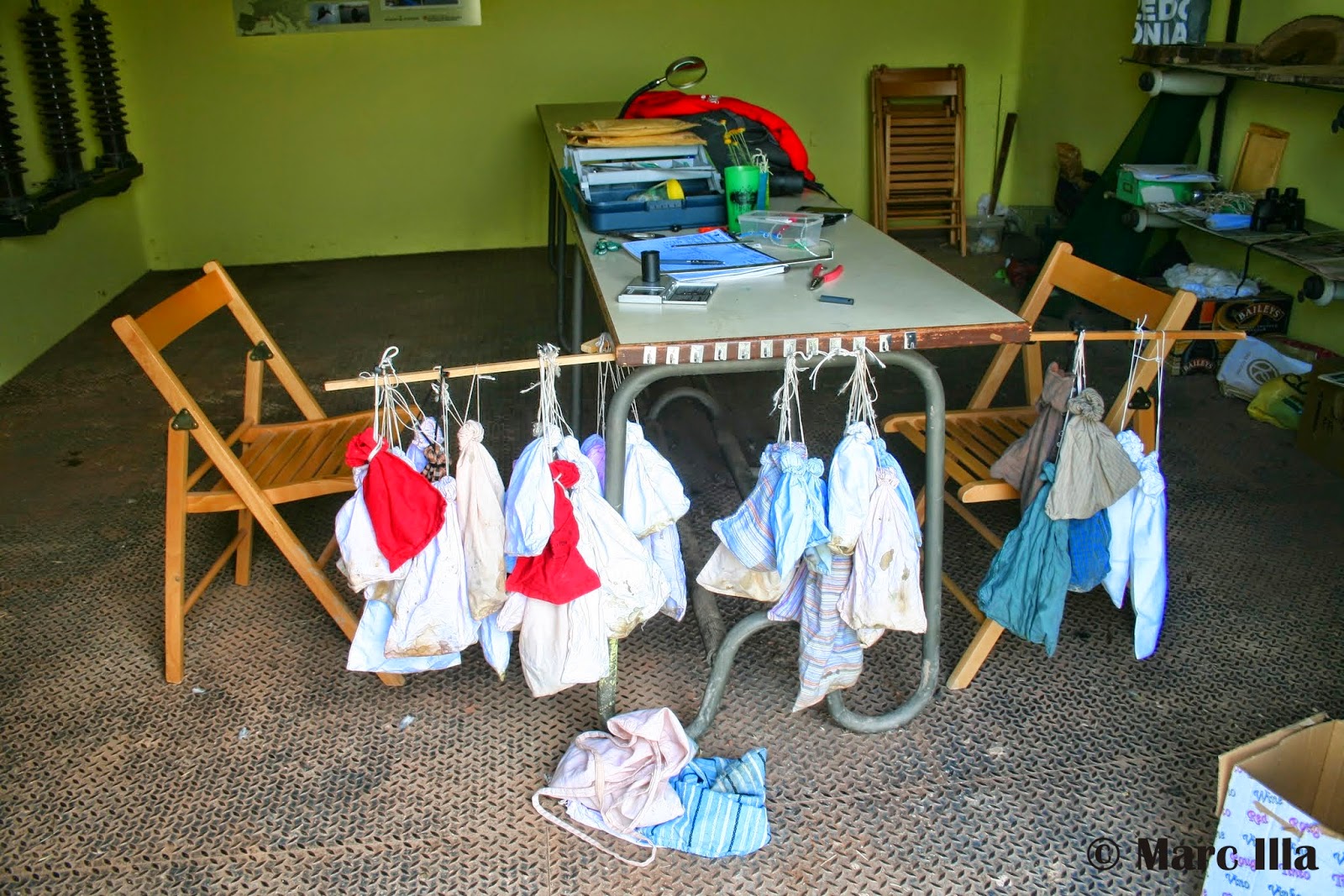 So, although I know this will sound weird, we had a really exciting ringing morning!
During the first netround, we trapped this big chicken; friendly called Woodpigeon (Columba palumbus). 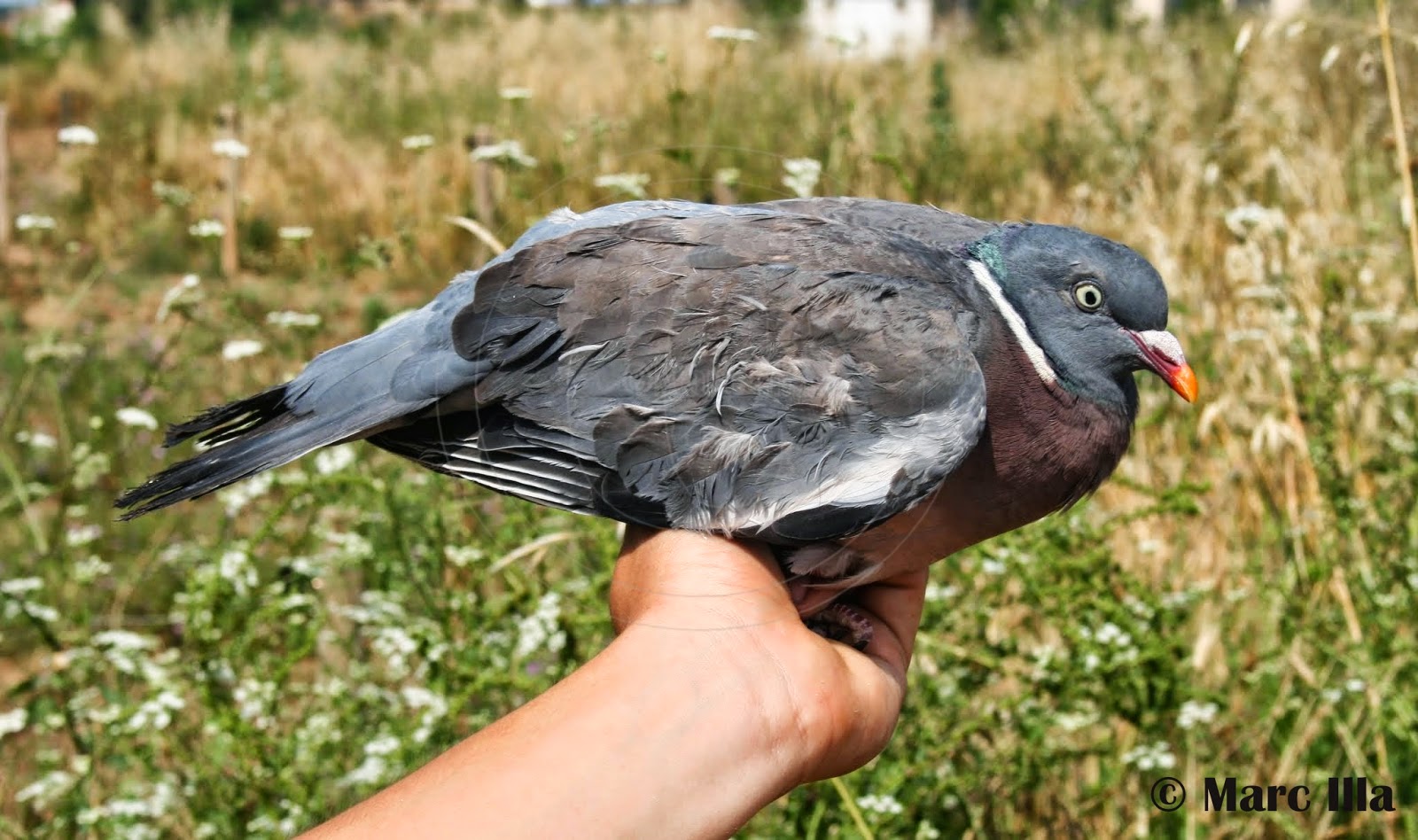 Last year I also trapped one in the same place. If you're interested in, I reccomend you to read it here.
The 2014's bird is perfect to complement the other post, because is a nice exemple of a 2cy (EURING 5). 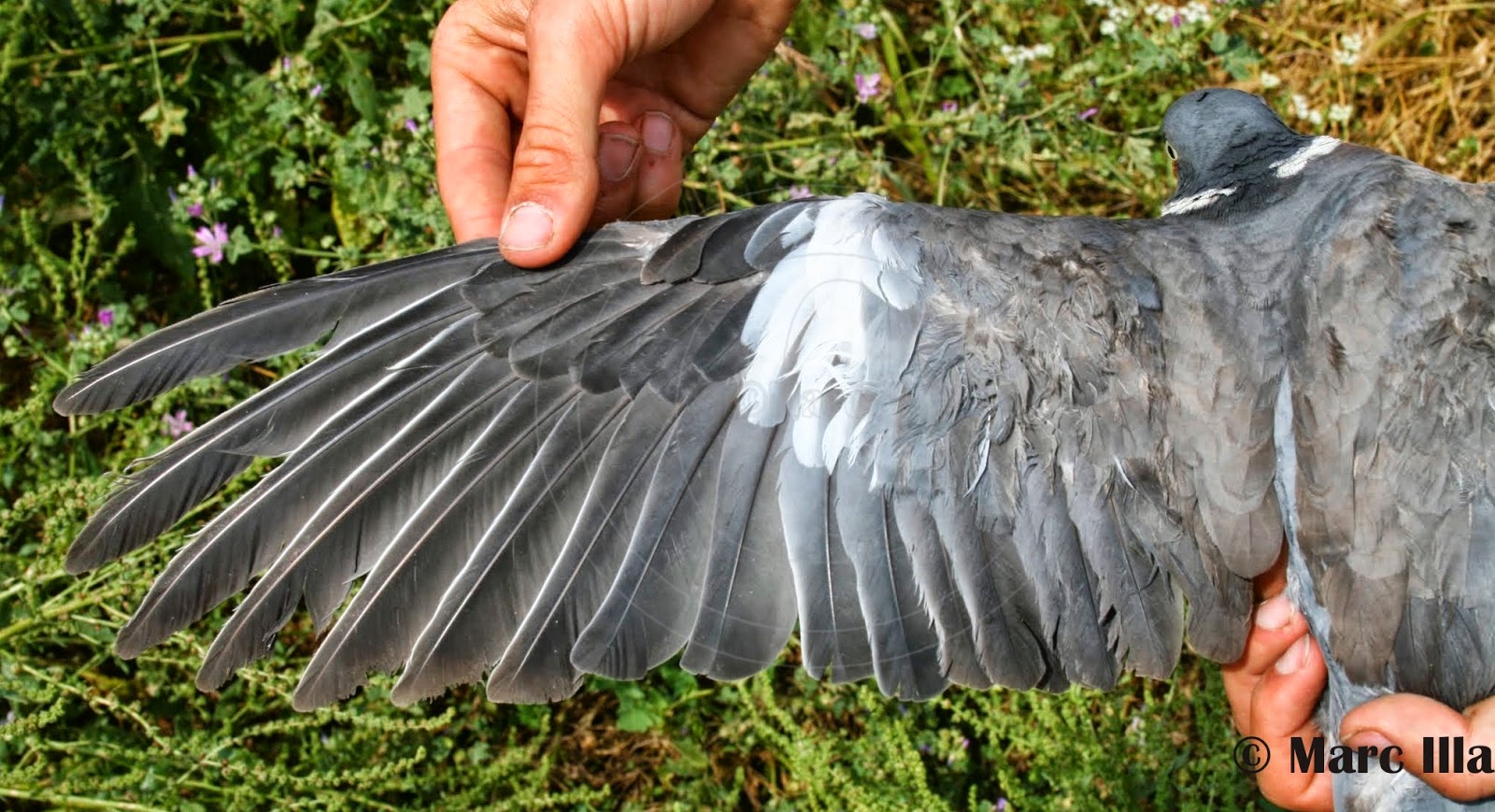 The first thing I noticed was, as what happens with Turtle Doves, that some median primary coverts (usually hidden behind the alula feathers) had a ochre spot on the tip, thing that may indicate juvenile feathers. Actually, the biggest feather in the alula seemed retained (?), at least is more brownish and wider than the 2013's bird, and also have a white thin border. 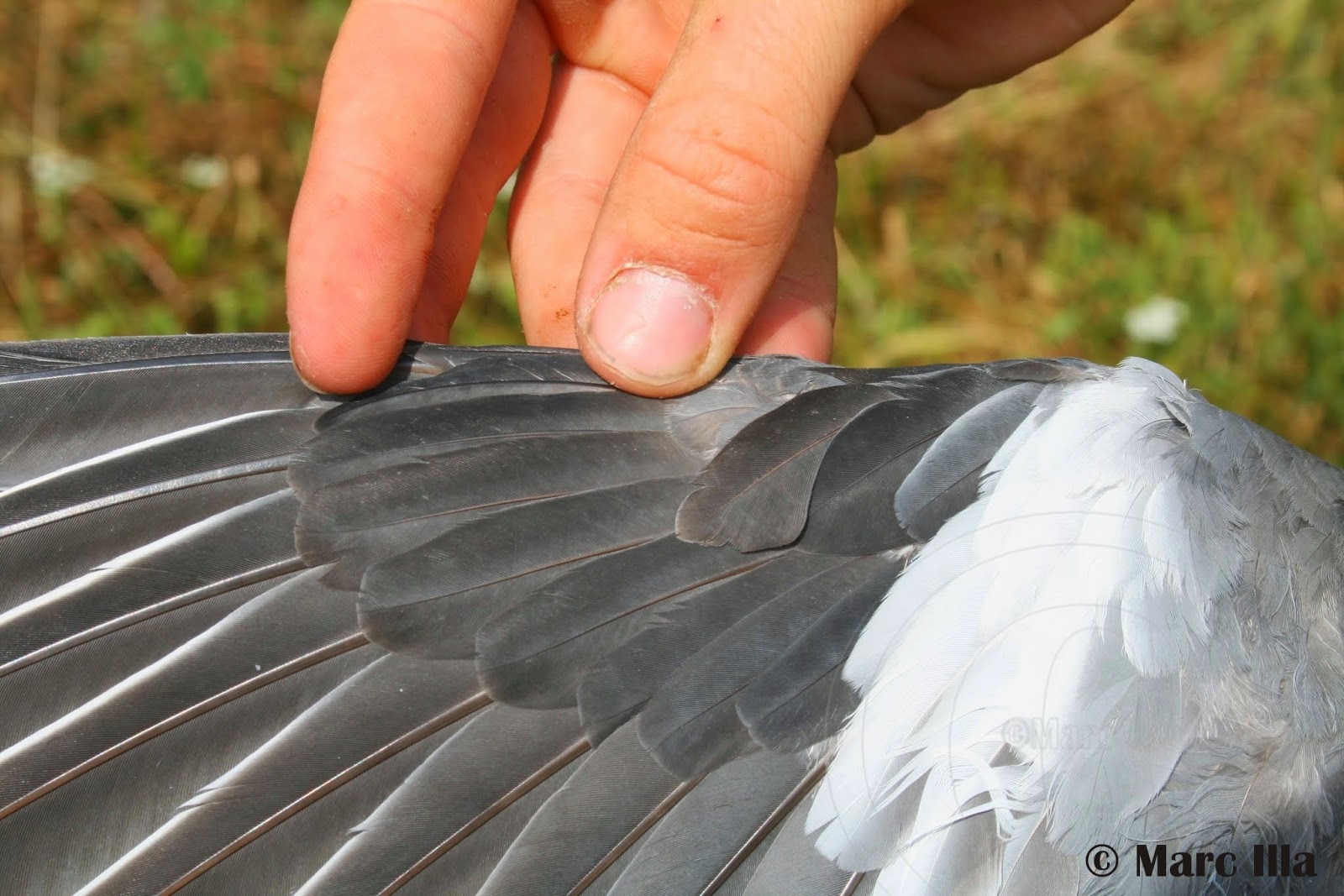 Tertials, some scapulars and also many coverts looked more brownish and with a faint light border on the tip. There are two obvious generations on secondaries, with the juvenile ones clearly more pointed. 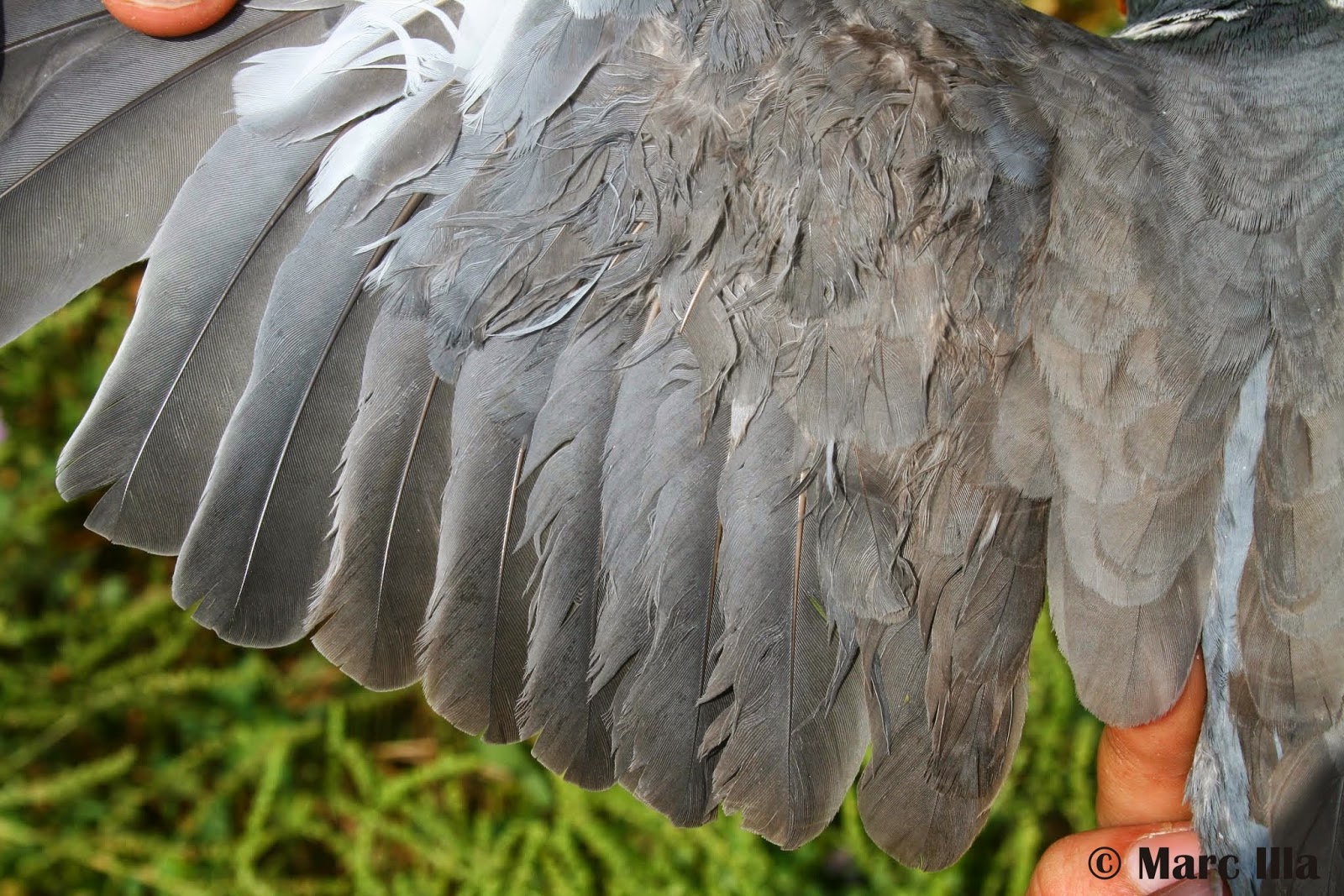 And primaries were quite worn and in active moult, but there wasn't any retained outer primary. All of them should be from the post-juvenile moult, and the new, growing ones, is the start of the first post-breeding moult. 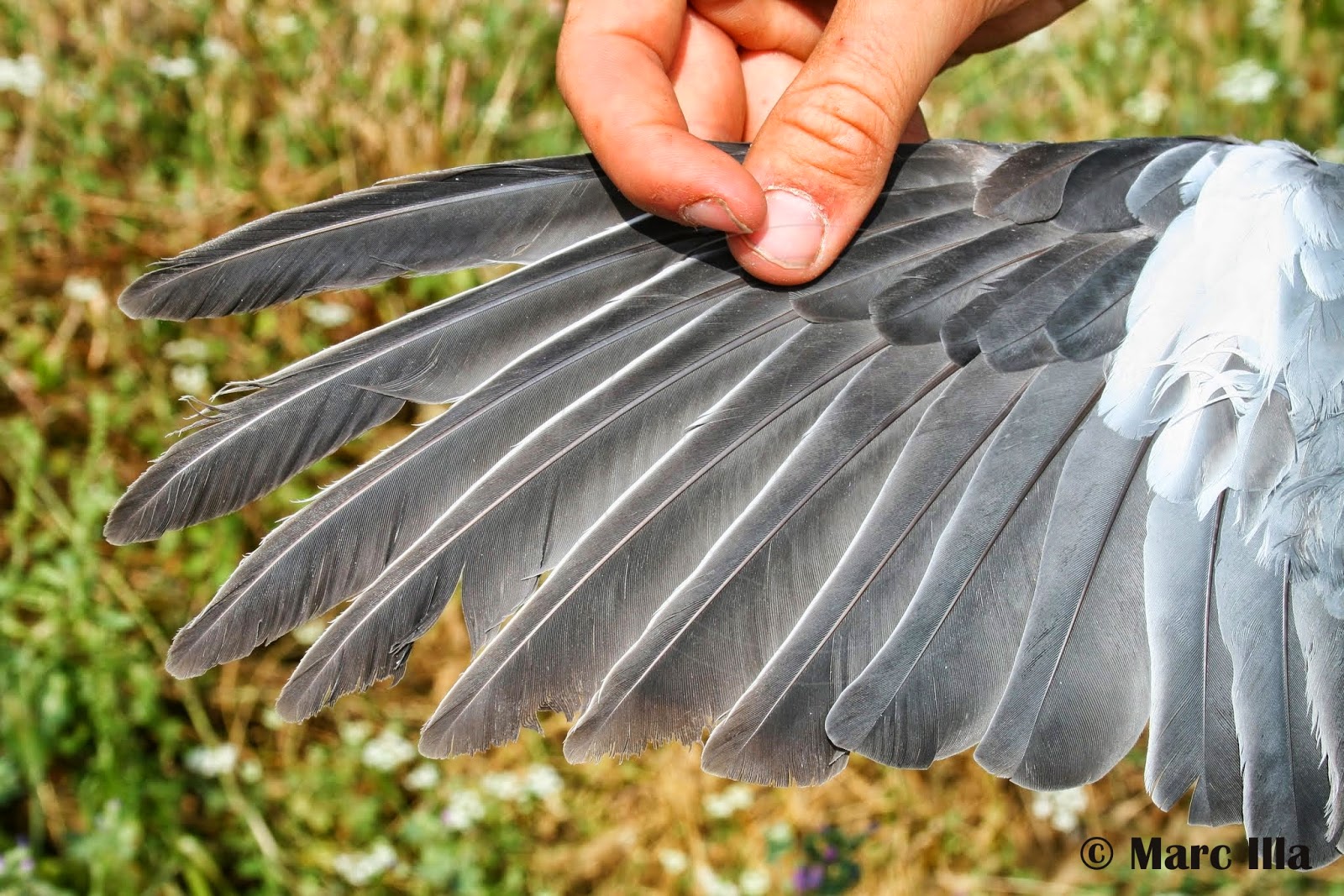 Additionally, it had some tail feathers retained. 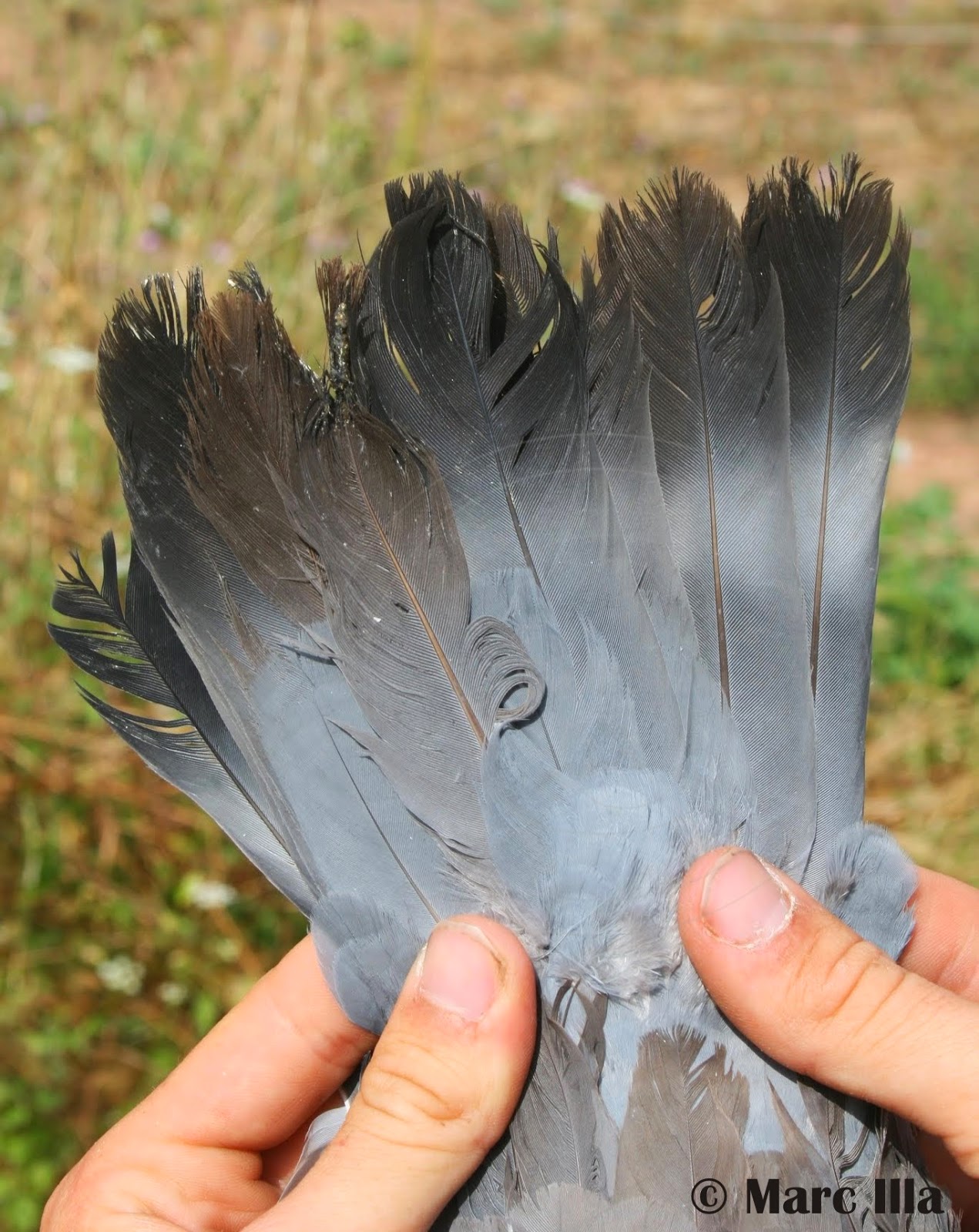 In the following netround, a really nice Bee-eater (Merops apiaster) was waiting for us. Really exciting bird!, but even more when we trapped another later on!!
Also last year I trapped one and I posted something about. It was nice to have two birds, but even more because they had different ages and sexes! 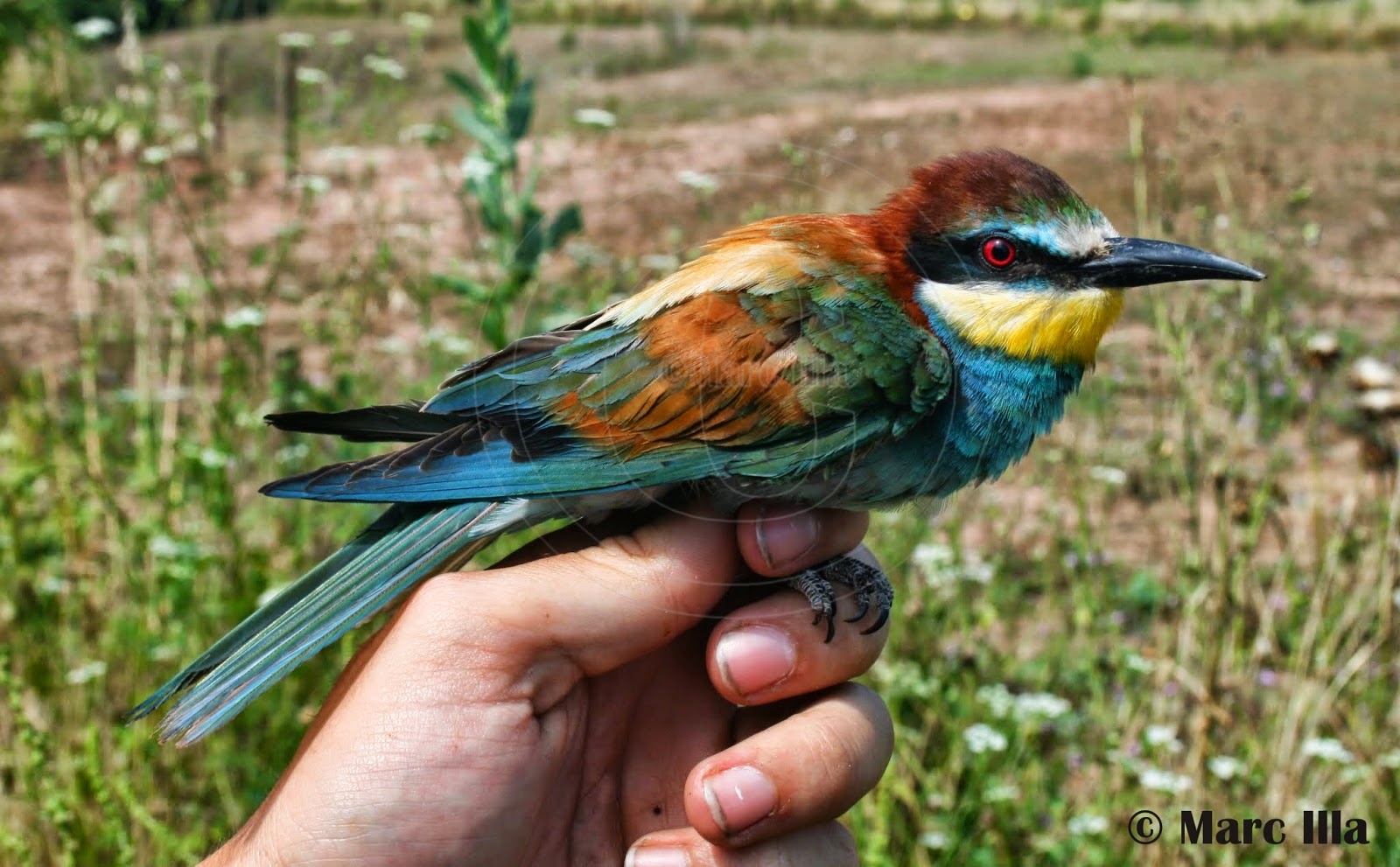 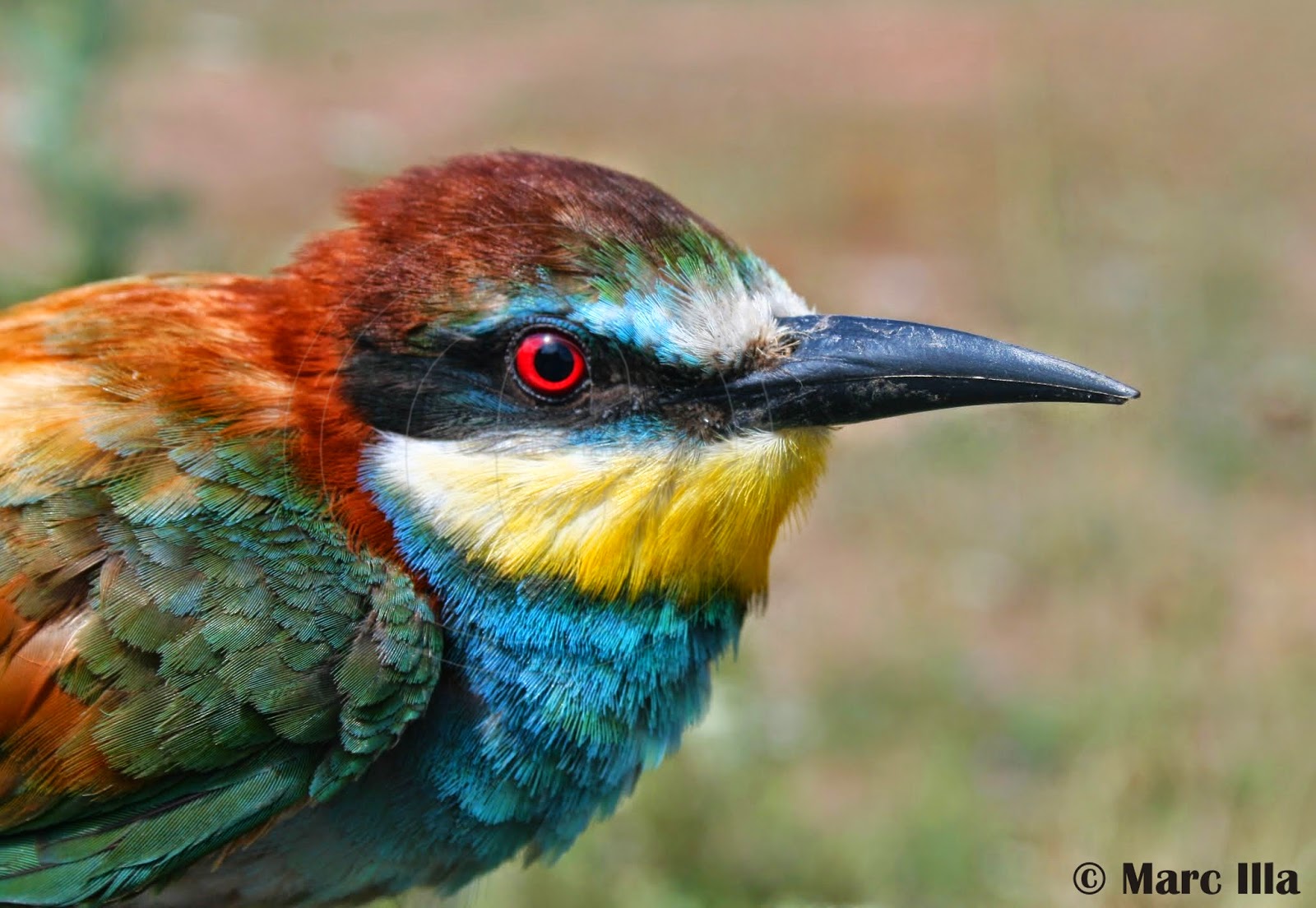 The first one was a 2cy (EURING 5) male, with blue and worn primary coverts, 'clean chestnut' in the inner wing and brighter colours. 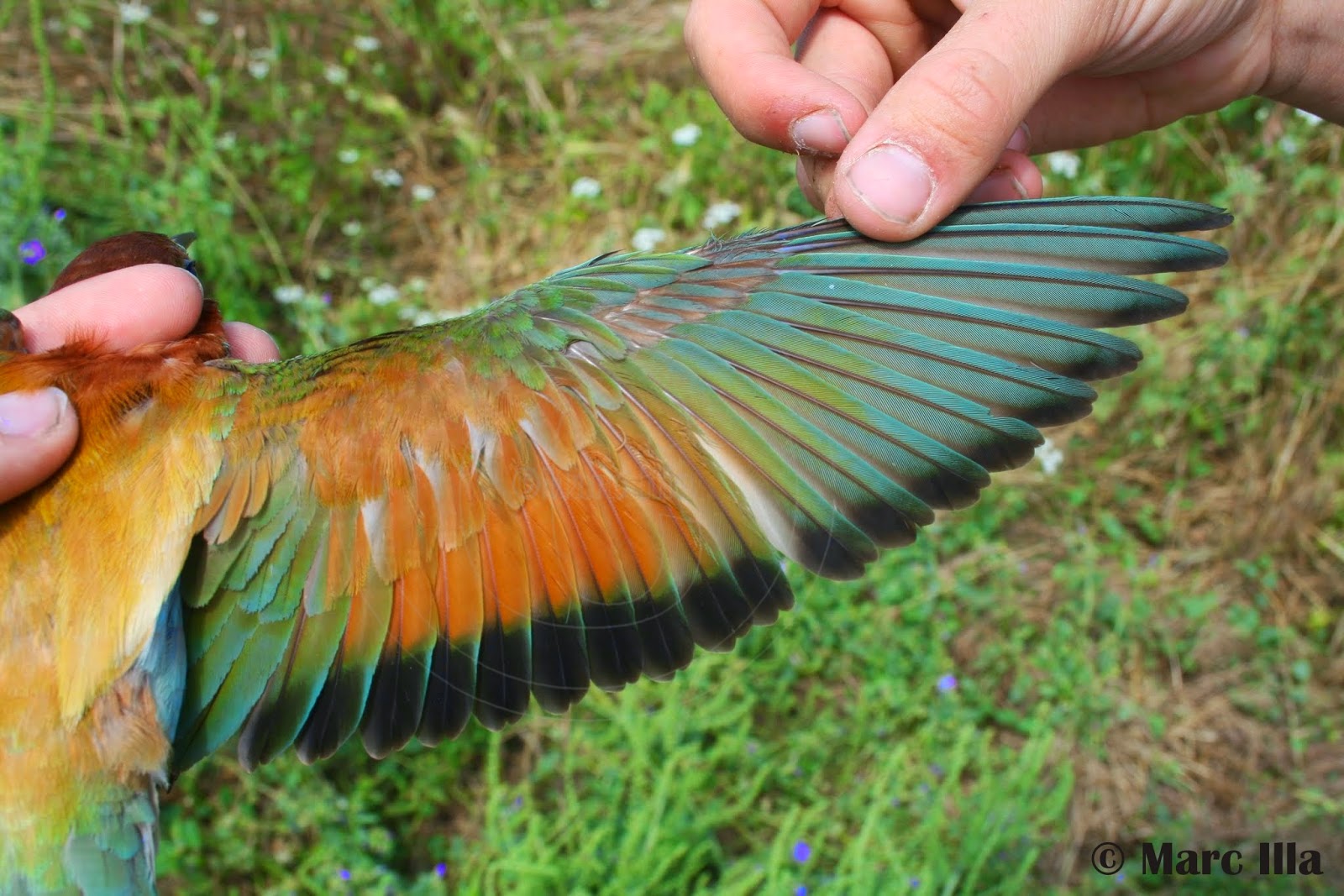 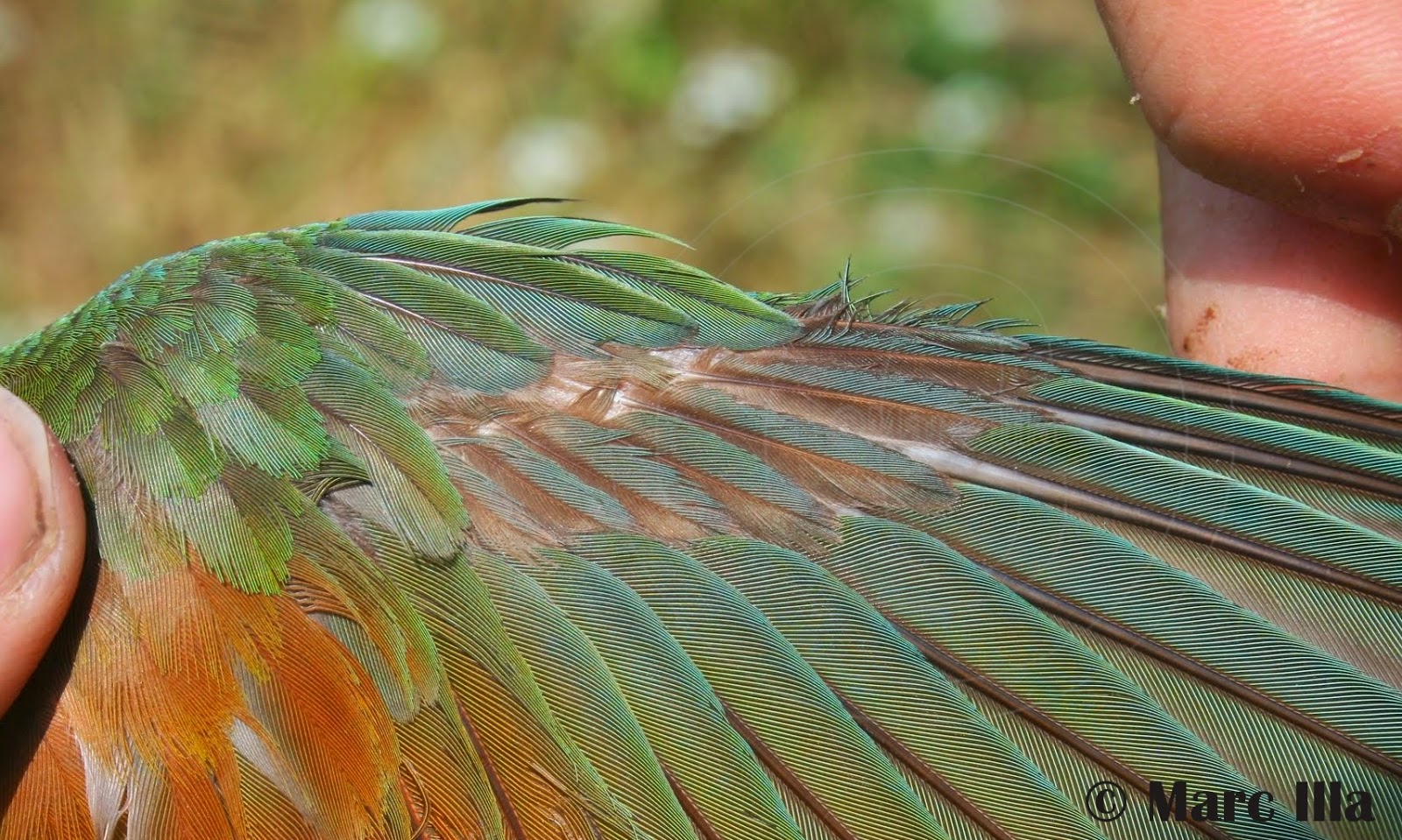 The second was an adult (EURING 6) female. Look at the fresh and green-tinged primary coverts, with the same tone as in the alula. There's some green in all GC's and in scapulars. 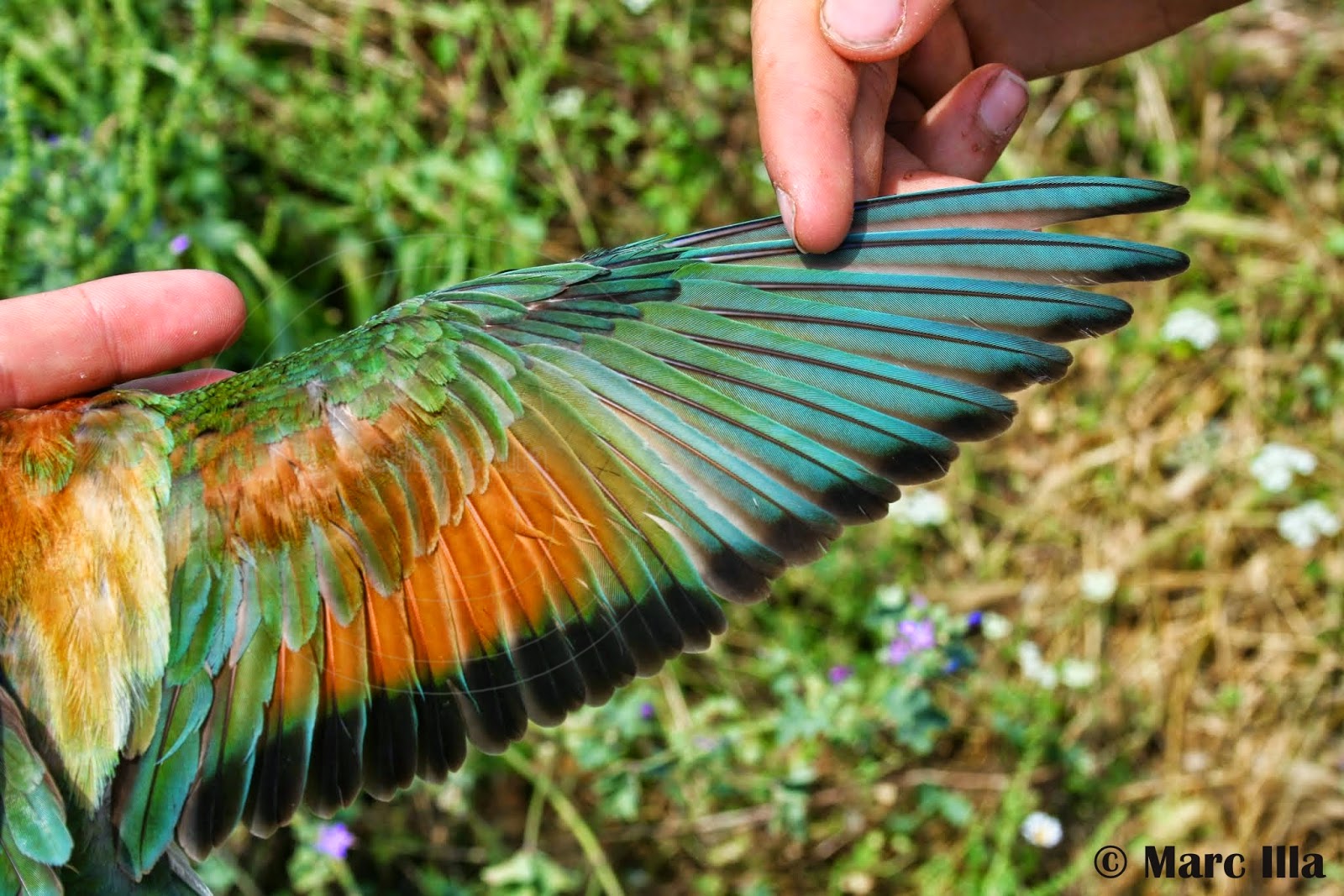 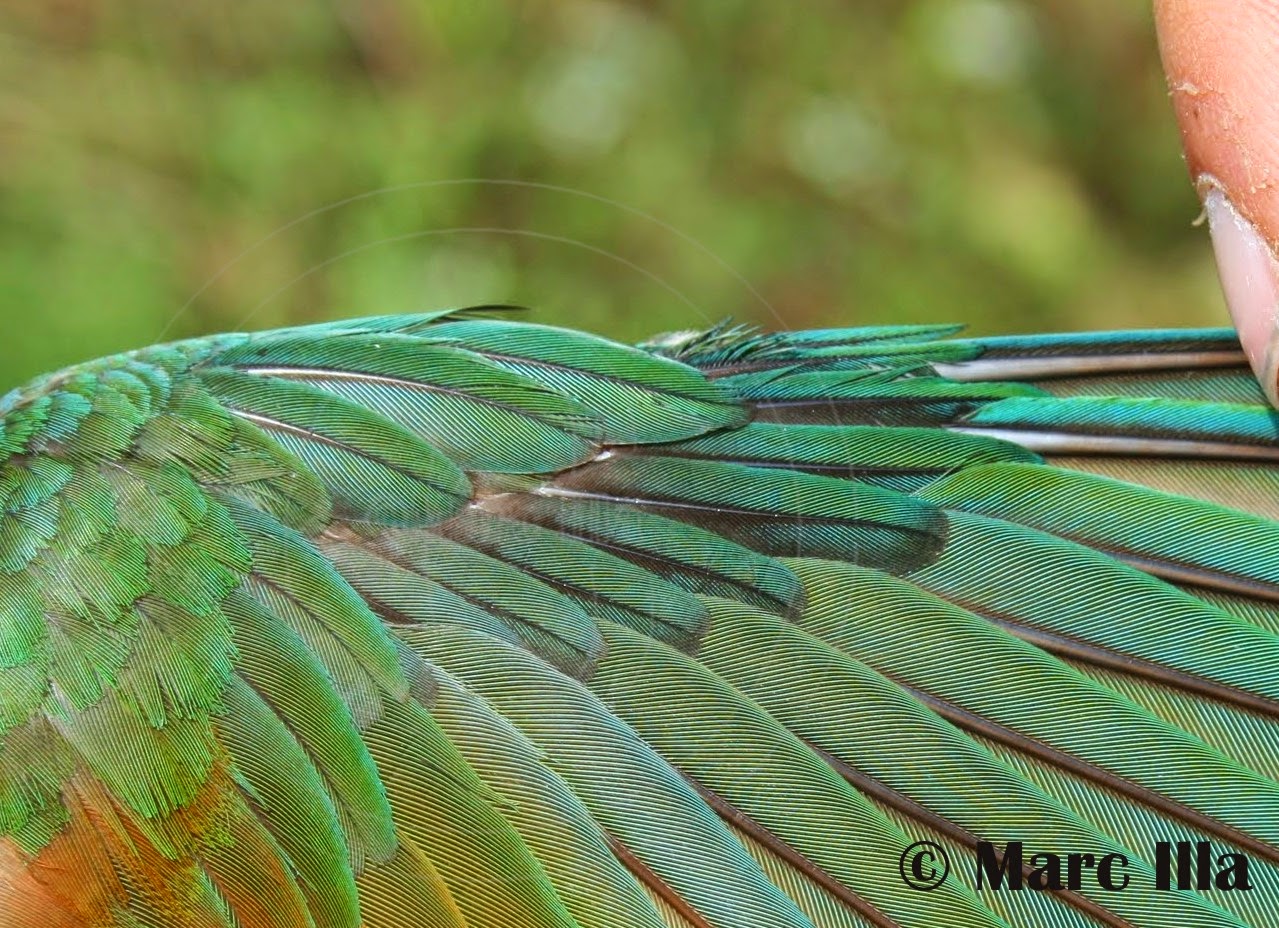 We also caught a Golden Oriole (Oriolus oriolus), and as I've been doing with all the other I've ringed, I'll keep wing photos and ageing comments for an incoming post!! 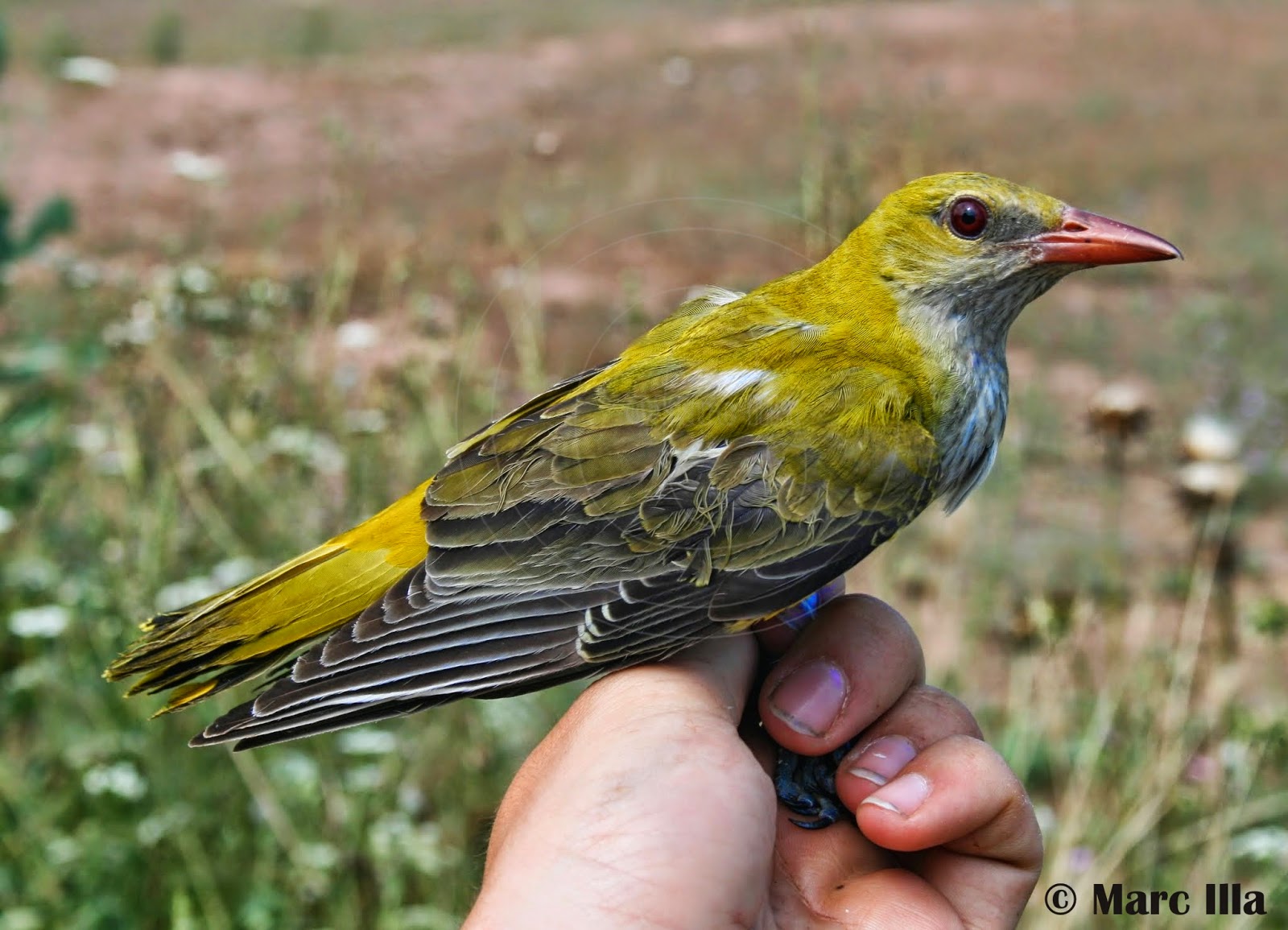 3 baby Crested Larks (Galerida cristata) were so nice to complement all this nice birds. I really love this wing pattern! 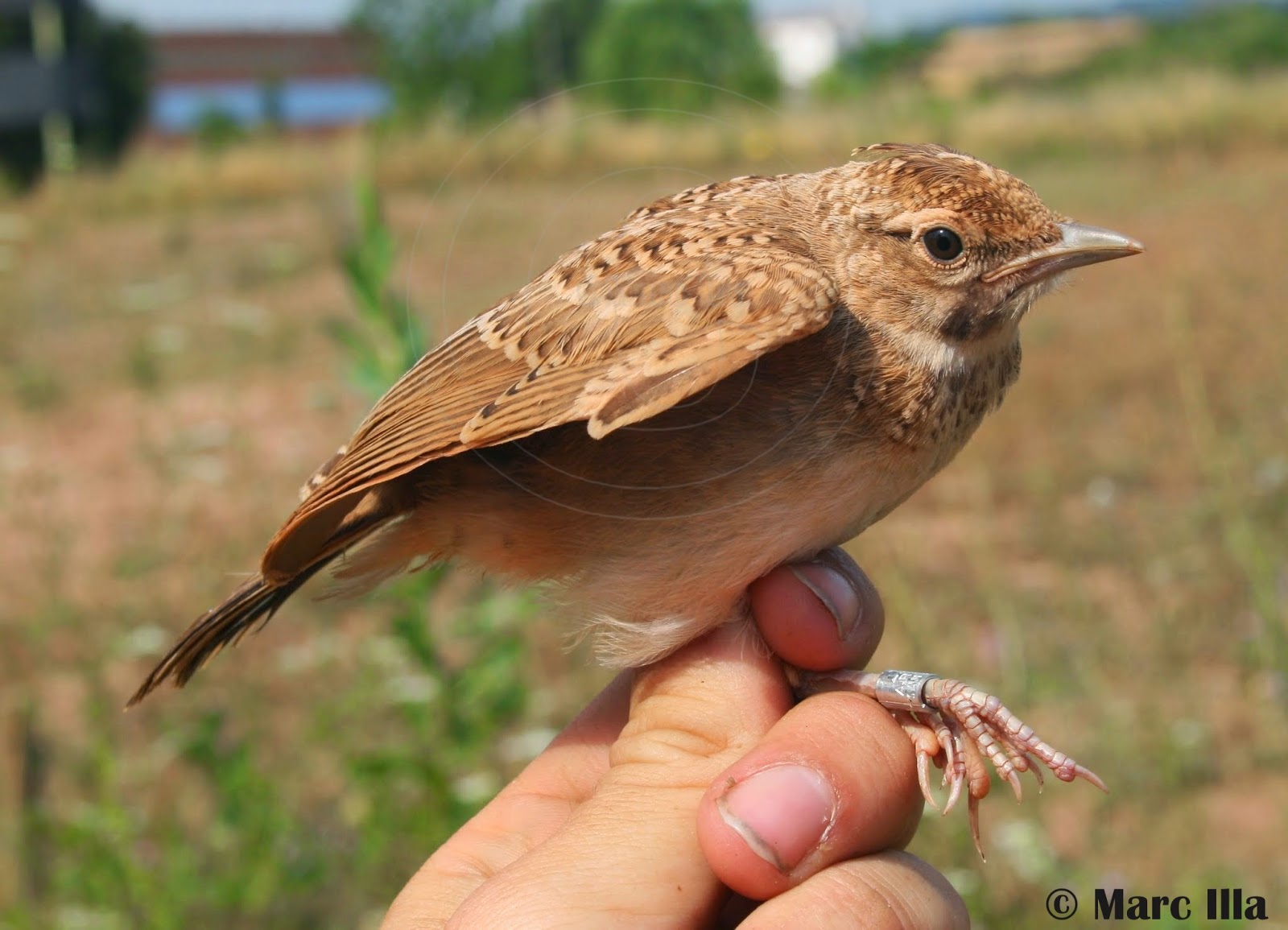 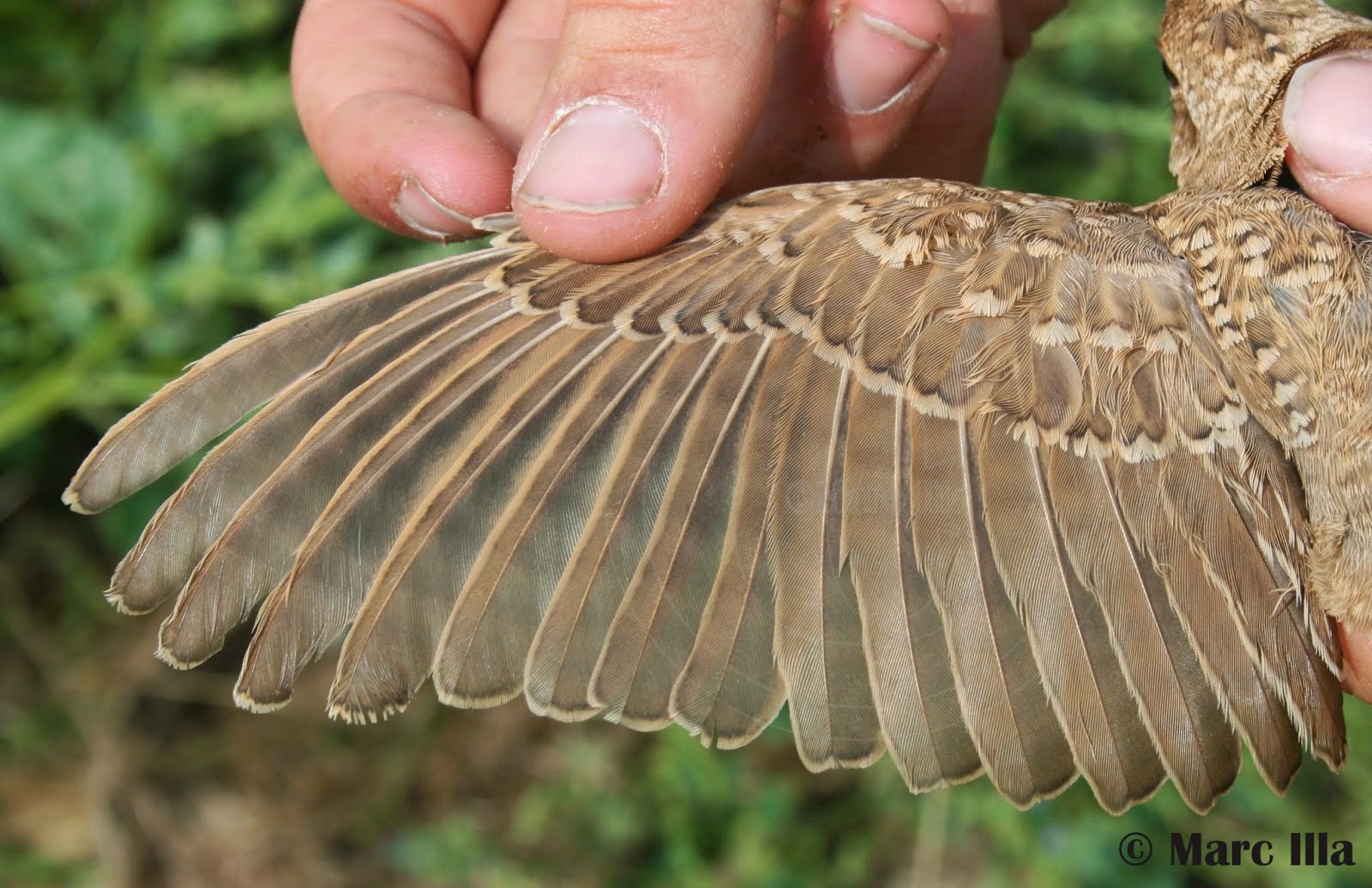 Talking about babies I cannot forget about the Magpie (Pica pica) that was together with one of the Bee-eaters. Look how the white in the outer primaries is quite far from the tip... 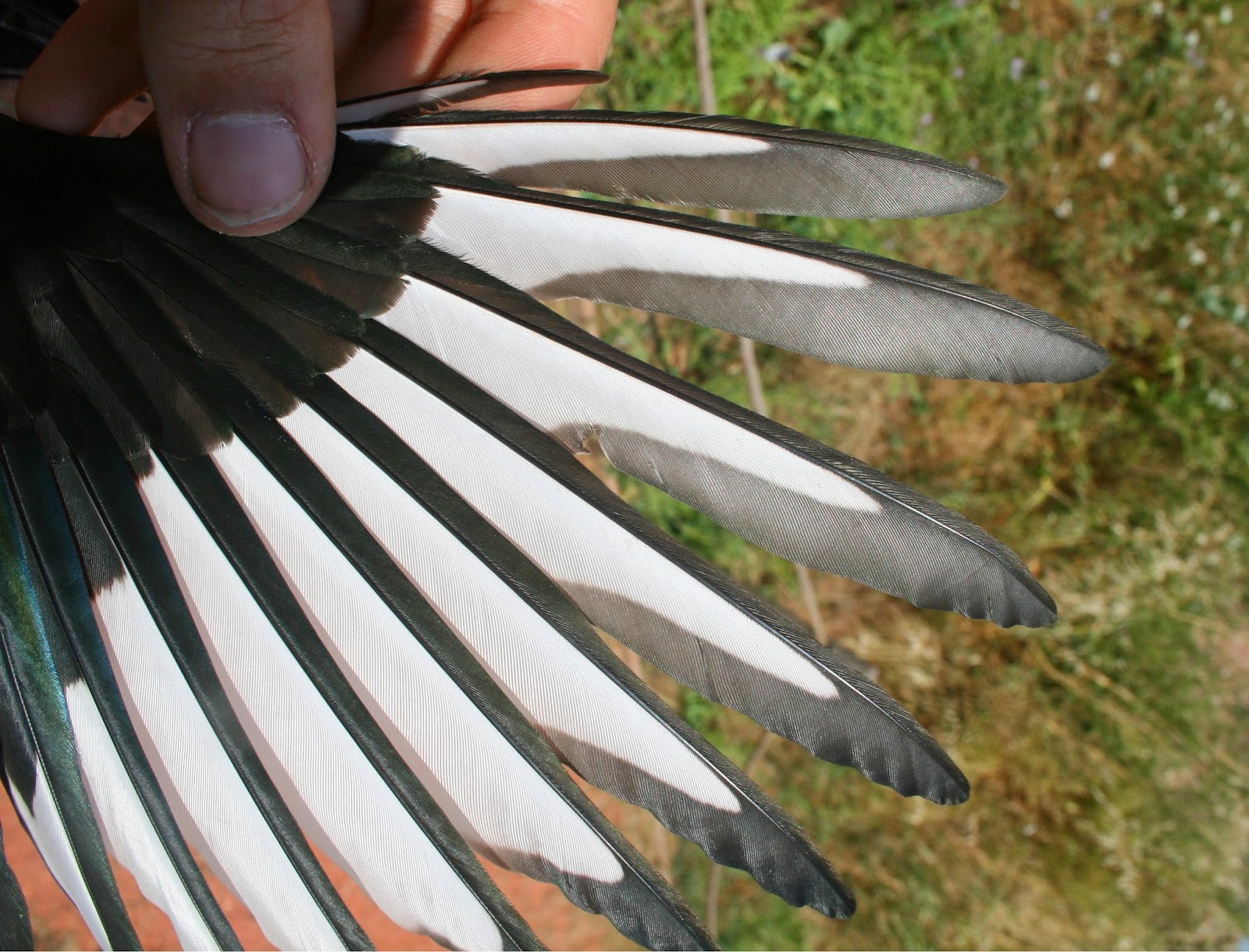 I could be writing names for hours, but I'll simplify everything in a list! 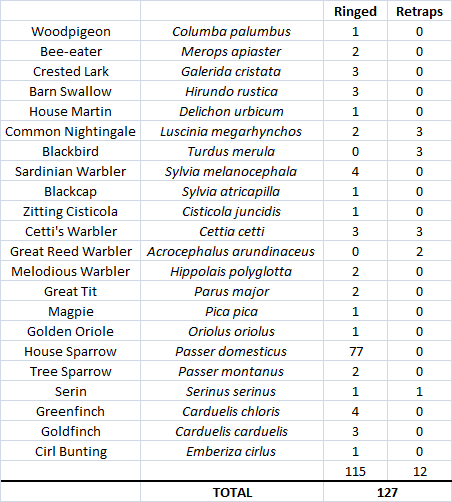 We are close to reach 2000 ringed birds in this place. Thanks to everybody who had helped me at some time! And special thanks to Lídia for this really nice day!