I've spend most of my life surrounded by mediterranean forests. It actually is the commonest habitat in Catalunya, and I would like to write a single post about it; specially since I started a constant effort ringing station in Montserrat, inland, and I'm gonna focuse the post in the habitats in the lowlands in central Catalunya. 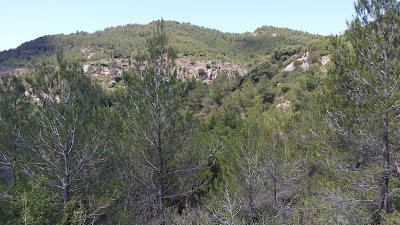 Probably one of the most important factors you have to think about when you talk about this habitat is the fire. Many plant species are completely adapted to it, and it actually is part of the ecological dynamics. Thus, in a mediterranean forest you'll usually find succession communities. Potencially, a mature mediterranean forest in Catalonia would be a forest dominated by Evergreen Oaks (Quercus ilex), and quite dense undergrouth. Nonetheless, almost all forests you would see are dominated by Aleppo Pines (Pinus halepensis), which represents the first forest stage in a successive progression of this habitat. Actually, Quercus ilex grouw better in the shadow of another tree, cause when they are not enough large, Sun's radiation can affect them too much. 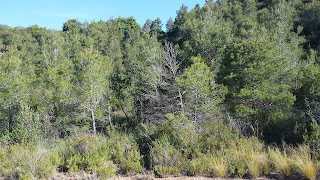 I will speak about two places where I've been working. The first one is in Montserrat mountain, an area that was burned in 1986. 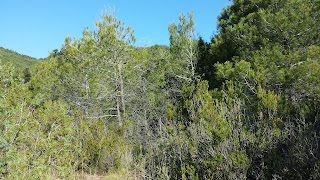 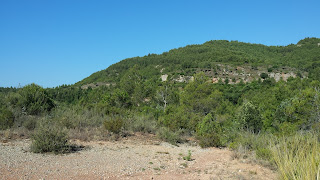 As you can see, Pinus halepensis is the dominating species, with Arbutus unedo, Lonicera implexa, Smilax aspera and Rosmarinus officinalis mainly. 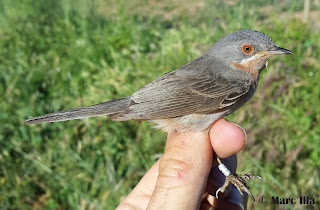 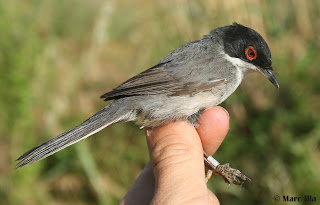 This small Warblers are often difficult for trainee ringers, so the following lines are specially dedicated to them.

Ageing Western Subalpine Warblers deserve, surely, more explanation. Still, I'll post a couple of pictures:
Sexing Subalpine Warblers is usually easy, like in the picture above. Nonetheless, some females can be quite similar to males, but they have mainly orangish tones in underparts, and the coloured area is more restricted.

The main trouble for trainee ringers, but, is the identification of first years in juvenile plumage. As both species are quite common, and as their chicks become fledgings more or less at the same time, it is actually easy to catch them. It is easy to find them in complete juvenile plumage from late May to early July.
Appart from the differences in shape, specially in the head, and wing formula between both species, juvenile inornata have browner borders in greater coverts, tertials and secondaries, which are usually easily seen even in the field. Juvenile melanocephala is usually gryer and darker, while the grey in juvenile Subalpine is paler. Underparts are also cleaner in Subalpine. Both Subalpine and Sardinian are present in almost all the stages of recovery of the potential habitat, and also in the mature forests. Other species' presence depends more on the stage; scrubland, small trees, medium to some large trees, etc. The place in Montserrat, Can Maçana, was burned 29 years ago. The medium sized Pine forest, with abundant and rather dense undergrouth, and the Rosmarinus officinalis scrublands in the most exposed areas, make a divers habitat for birds. So, some typical scrubland birds can still be found, in low densities, like Dartfords Warbler (Sylvia undata). Melodious Warbler (Hippolais polyglotta) usually appear when there are big bushes and first trees appear, which are usually Pubescent Oaks (Quercus pubescens / humilis), specially in N sides. Many forestal species can appear already. Western Bonelli's Warbler (Phylloscopus bonelli) and Firecrests (Regulus ignicapilla) are usually found were trees are still small, while Nightingale (Luscinia megarhynchos) and Blackcap (Sylvia atricapilla), for instance, appear when the trees are taller and the undergrowth also is taller (because of the shadow of the trees).
As trees grow, and the habitat grow in vegetation diversity, other species appear. Following the sequence, Winter Wrens (Troglodytes troglodytes), Great, Blue and Crested Tits (Parus major; Cyanistes caeruleus; Lophophanes cristatus) and Short-toed Treecreepers (Certhia brachydactyla) colonize the habitat.

Common Nightingales (Luscinia megarhynchos) arrive in breeding sites during April, and by the end of June they are already doing the complete moult. As soon as chicks are independent, sometimes even before, the first primary is dropped, being probably the fastest complete postnuptial moult in the area. 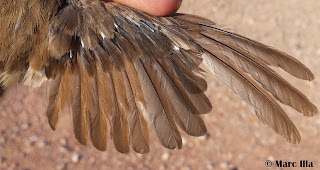 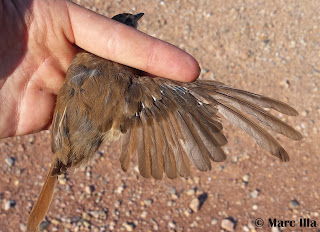 Blackcaps (Sylvia atricapilla) and, sometimes, Garden Warblers (Sylvia borin) can also appear. Both are related to north orientated sides, and specially close to small rivers or in dry ravines. 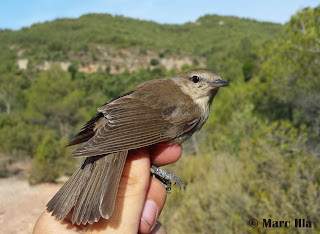 Talamanca is a small village north east of Montserrat. There was a big fire 10 years ago, and because of this, it has been a very interesting place for local birding. 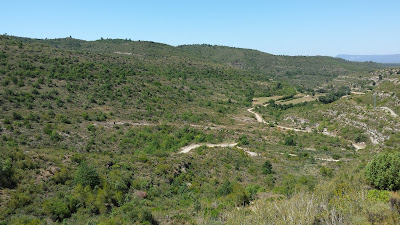 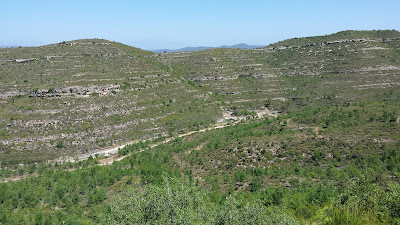 As I was saying before, N sides grow faster. In this bushland communities, mainly Arbutus unedo and Rosmarinus officinalis, and with Quercus pubescens, is the place where you cand find other interesting species, like... 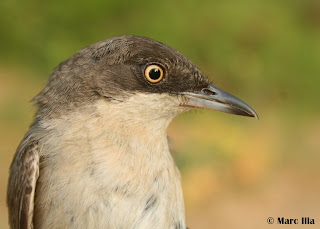 There are lots of rock natural walls, which together with the open areas, make the perfect habitat for Blue Rock Thrush (Monticola solitarius) and Black-eared Wheatears (Oenanthe hispanica). 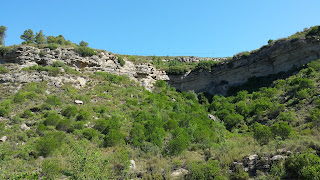 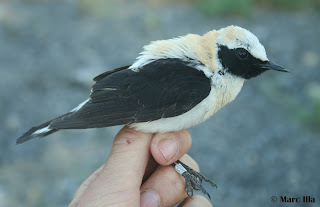 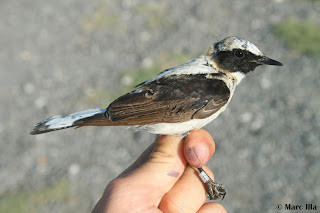 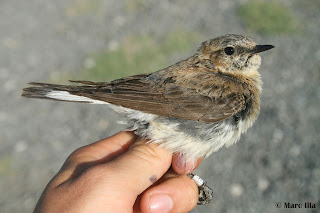 Before the fire, the a Black Pine (Pinus nigra) forest was found in this place. Now just a few trees remain, but the change of the habitat, despite the fire, was not that bad. Fire is definetely important in the mediterranean ecosystem. 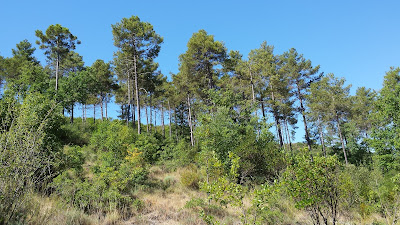