The next question will be already... 'What does rain mean?'
Maybe I am exaggerating a bit, but seriously, I haven't seen rain for the last half year. Indeed, last time I saw actual rain I was still in Sweden...

The combination of no rain plus higher temperatures than usual are making this winter very strange. I would had never imagined I would miss those celcius below zero, freezing my hands while putting up nets or whatever, and creating those frozen landscapes...

Anyway I have got an entire month full of things, so here's a review of the entire January!

I started the year in my particular piece of paradise, Cuberes, where I trapped some Goldcrests (Regulus regulus) - quite cute species to start this year's ringing! 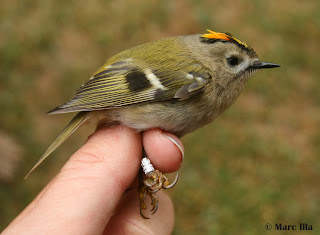 The following days, back home, I realised I had already ringed most of the wintering individuals of most of the species. This winter it's strange...

A minimum of 6 Penduline Tits (Remiz pendulinus) are one of the most interesting wintering species so far this year. One of them, on the picture below, was already ringed the previous winter. 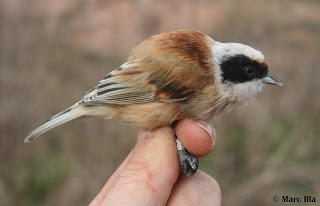 As most of birds were ringed already, I started putting my efforts on other stuff. I have been using the clap nets quite usually, focusing of wintering Black Redstarts (Phoenicurus ochruros) and Stonechats (Saxicola rubicola). They are common wintering visitors to the fields, and especially related to human and agricultural areas. 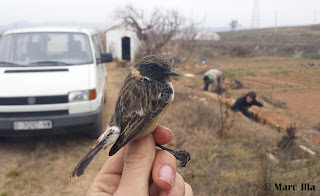 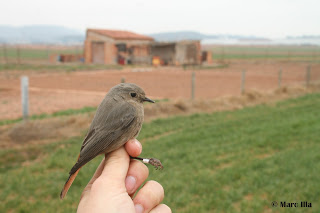 No "paradoxus" so far, but quite nice adults... 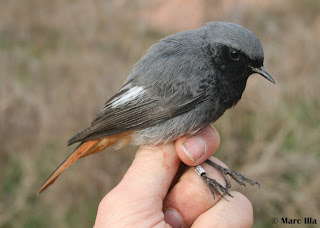 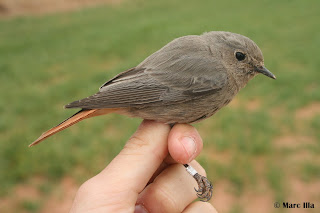 I have also got time to focuse in not such easy species to catch. With the very determinant collaboration of my mouse, I got 3 Kestrels (Falco tinnunculus). 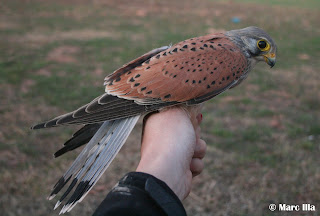 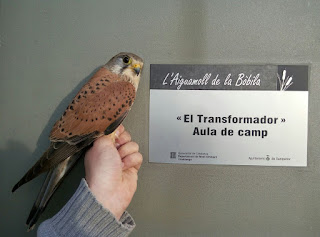 Using cages, the first Water Rail (Rallus aquaticus) ever ringed in my place was caught, being the species number 90 ringed at the station! 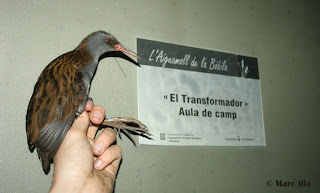 A few days ago I had trapped this Common Snipe (Gallinago gallinago), ringed in 2014 at the same spot; and the day after the Water Rail and at the same wader place, we got this unexpected Jack Snipe (Lymnocryptes minimus)!

The day after, and following a quite nice sequence of good days, we got this very nice Black Wheatear (Oenanthe leucura) on a day off from my usual area. They are seemingly very easy to catch with clap nets..., I think it took us about 10 minutes to spot it, set three traps and get it. 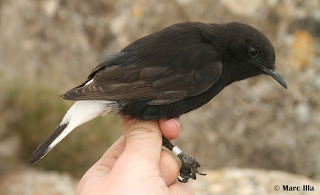 I was surprised for the not extensive postjuvenile moult, involving only 3 inner GCs in our bird.

Nice set of species to start the year, will see what follows...! For the moment, I'll keep waiting for a bit of rain and cold (just to imagine the possibility of some nice winter species showing up...). Will see...!
Posted by Marc Illa at 11:19 AM