Click here to check the seasonal total at Flommen for this year. 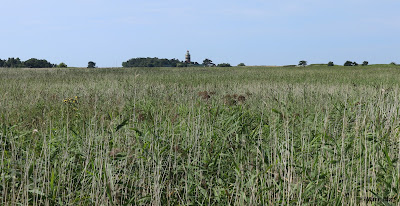 Contrary, for instance, to the previous year (2016), from the beginning of the season it was noticeable the low density and bad growth of the reedbed, probably due to the cold and late spring that affected most of Scandinavia. This had also an apparent effect on the breeding birds, translated into late breeding of the local species, such as Eurasian Reed Warblers (Acrocephalus scirpaceus) with chicks fledging as far as late August, and also Reed Buntings (Emberiza schoeniclus) with fledglings during mid-August, also slightly later than usual. The bad breeding season had direct effects on the seasonal totals, with the Penduline Tit (Remiz pendulinus) being a good example: only 4 individuals were ringed (average: 18), very likely as a consequence of the bad breeding season in Southern Sweden (Peter Öhrström com.pers.). But this effect is also seen in the numbers of Reed Warblers (A.scirpaceus) and Willow Warblers (Phylloscopus trochilus), species in which the juvenile peak migration, which is usually very strong and produces a lot of captures, was very diluted in numbers and almost unnoticeable through the season.

During the first days of the season in late July and most of August, the weather has been quite unpredictable, with almost daily rain showers and several windy days that probably lowered slightly the amount of trapped birds through the season.

As it is already a clear trend in the last years of the standardised ringing at Flommen, Reed Warblers keep a clear tendency below the average (seasonal total: 1061, average: 1940), as well as Willow Warblers (seasonal total: 149, average: 628). As it was mentioned above, the apparent bad breeding season for this species has clearly affected this season’s numbers, especially in the case of the Willow Warbler. Due to the late breeding season, the adult peak migration passage for the common Acrocephalus Warblers, Reed Warbler (A.scirpaceus) and Sedge Warbler (A.schoenobaenus), has also been slightly delayed. On these species, adults migrate first than the juveniles, and some years the peak passage of adults has apparently already passed by the time the season starts the 21st of July. That is especially the case of the Sedge Warbler, and this year’s late breeding is clearly reflected in the big amount of adults trapped in the beginning of the season. The seasonal total for the Sedge Warbler is 750 ringed individuals, above the average reference number of 588, probably due to the unusual amount of adults. On the other hand, the numbers of Marsh Warbler (Acrocephalus palustris) were quite low this season, both for adults and first-years (seasonal total: 68, average: 92).

The absence of Blue Tit (Cyanistes caeruleus) invasion this year is also affecting the seasonal total number at Flommen, since 4 birds were ringed when the average is 80. After the relatively calm August due to few juveniles (bad breeding season), September had very few good days in terms of amount of nocturnal migrants landing in the peninsula, and thus the numbers of the regular September species were generally lower than the average reference number. As examples: Robin (Erithacus rubecula) (seasonal total: 56, average: 75), Dunnock (Prunella modularis) (seasonal total: 25, average: 54) and Winter Wren (Troglodytes troglodytes) (seasonal total: 43, average: 40).

On the other hand, it is worth mentioning the good numbers for Barn Swallow (Hirundo rustica) (seasonal total: 180, average: 140), Sand Martin (Riparia riparia) (seasonal total: 143, average: 43) and White Wagtail (Motacilla alba) (seasonal total: 22, average: 12); three species which their numbers depend quite much on the formation of a roosting site in the study area, that was present this year daily during the beginning of the season. 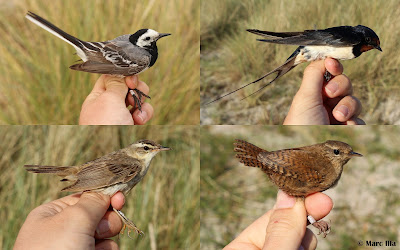 Interesting local breeding birds such as Bearded Reedlings (Panurus biarmicus) bred again in the area (they were common breeding species in the past, but had disappeared for several years until they returned in 2015), and at least 2 pairs were detected. From the ringing data we obtained, both females in both pairs had a successful second clutch in August. In total, 13 juveniles were ringed through the season. Interestingly, at least two female Marsh Warblers (Acrocephalus palustris) were caught in the beginning of the season with broodpatches, and afterwards some fledglings confirmed the breeding of at least 2 pairs in the northern part of the reedbeds. Water Rails (Rallus aquaticus), as many other species as mentioned above, had also a delayed breeding season. 18 individuals were ringed at Flommen, 2 in the standardised ringing and 16 in extra ringing, using metal cages. During the last few seasons there has been an extra effort to ring local breeding Water Rails with quite good results, and although more work is needed, it is interesting to mention that we have no data corresponding to any returning individual (adult or juvenile) to the breeding sites. 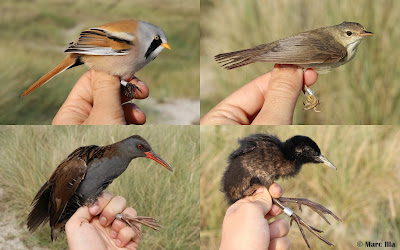 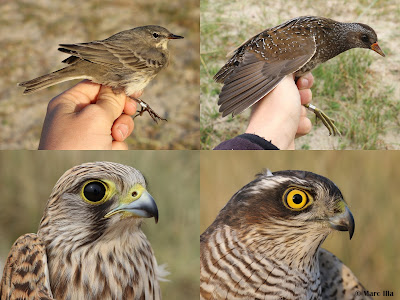 Ringers that worked on the reedbed with me were, listed by arrival date: Timmy Micallef, Per Andell, Ingela Källén, Emil Lundahl, Alex Zackrisson, Tore Dahlberg and Harald Ris. And, of course, big TACK to the rest of the Falsterbo Bird Observatory crew for another great season!
Posted by Marc Illa at 2:55 PM