From last Thursday to this past Sunday, I stayed in Ebre Delta with Josep Ramoneda, Ferran Fitó, Joan Manubens and Bernat Ferrer. Last year, 2011, we passed the 'December long weekend' in Ebre Delta too. It was so great, so we decided to repeat the experience.

We slept in La Tancada campsite, that's situated in a good place, very close to the main birdwatching sites.

Because of the northen winds, we saw lots of interesting birds. On Thurday, we started having a look in some ponds. L'Encanyissada is the biggest one, nice place to see some ducks and grebes. 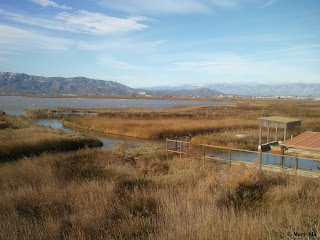 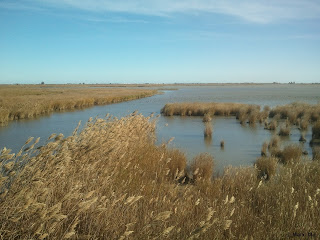 Later, we went to Salines de Sant Antoni and the large beach of Trabucador, where always you can expect lots of waders, specially Calidris. 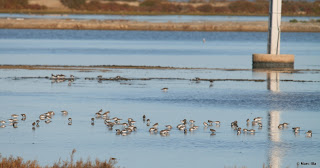 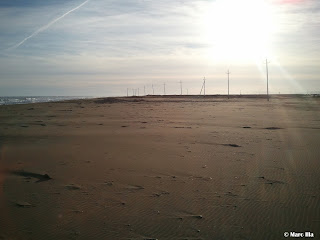 2746 Dunlins, 176 Little Stints, 22 Sanderlings and 9 Common Ringed Plovers (Charadrius hiaticula). Also some Grey Plovers and Greenshanks all around the beach. Arriving in Trinitat saltpants, at the end of Trabucador sandbar, we saw 11 Red-breasted Mergansers (Mergus serrator).

Later, we went to La Tancada pond, hardly ever with lots of Flamingos (Phoenicopterus roseus). We did the 'traditional' count (last year 5805 birds): they were (also) 1908. 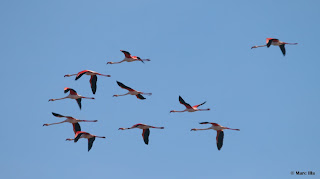 Friday was the most complete day. We started in Torre de l'Alfacada, watching Buda island. It's a really good place for birdwatching. During an hour and a half, we saw +150 Northen Pintails (Anas acuta) and big grups of other ducks, 2 Common Cranes (Grus grus), 5 Spoonbills (Platalea leucorodia), 72 Greylag Geese (Anser anser), 1 (1w) Barnacle Goose (Branta leucopsis), a nice Merlin (Falco columbarius) male and 1 dark Booted Eagle (Aquila pennata) as the most interestig birds. Also, a Goldcrest (Regulus regulus). It was so great! 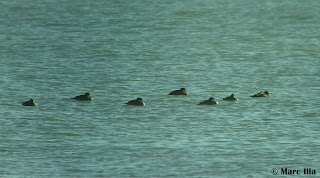 We continued to Serrallo ricefields, where we didn't find anything. Nevertheless, on Serrallo beach we saw 3 Common Scoters more.

At the afternoon we went to Fangar sandbar, a big sand dunes zone. We didn't see lots of interesting birds, but yes some diversity. The Sanderlings (Calidris alba) are so likeable there. 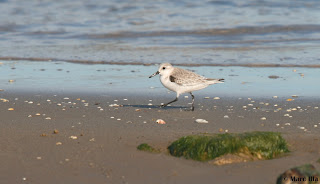 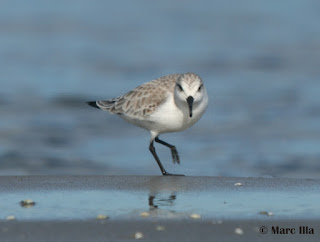 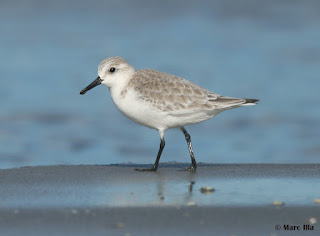 Just before the sunset, we stayed one more time in Trabucador beach. We saw 9 Red-breasted Mergansers (Mergus serrator) and the bid wader groups. 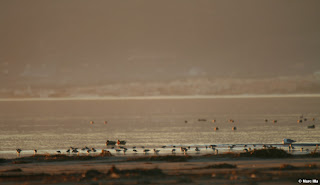 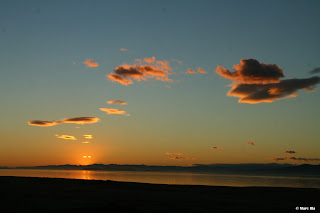 Saturday was the last day for Josep, Bernat, Joan and Ferran. It was a windy day... empty ponds, empty ricefiels... it seemed that all birds had disapeared. However, we found a ricefield full of Chaffinches (Fringilla coelebs). Looking carefully the flock, we saw 24 Bramblings (Fringilla montifringilla), a nice group. This year is very good for that species.

Later, at the afternoon, we decided to go along the beach, trying to found some birds on the sand (and also on the sea). Near Eucaliptus urbanisation, we saw lots of Lesser Short-toed Larks (Calandrella rufescens), 3 Jack Snipes (Lymnocryptes minimus), a Cirl Bunting (Emberiza cirlus) (a little bit scarce in Delta) and a beautiful and unexpected Fieldfare (Turdus pilaris).

Sunday was my last day. At midday I had to go, so I passed all morning walking along beaches. I saw a Caspian Tern (Hydroprogne caspia) and an adult Audouin's Gull (Larus audouinii). This last one is scarce in winter in this region (but not rare). Later, I saw a fantastic Short-eared Owl (Asio flammeus), and when I look at the sea, I found 13 Common Scoters (Melanitta nigra). I passed a lot of time watching the sea, and I also saw a Great Skua (Stercorarius skua). Nice morning, isn't it? Wait...

Coming back along the same beach, closer to the sea than before, I arrived on the 'short-something place'. Suddenly, I saw +30 Lesser Short-toed larks, and some minutes after I found, at least, 6 magnificent Short-eared Owls. I could enjoy them a lot, as ever; it was an amazing moment. I decided to leave out that part of the beach in order to not disturb the owls. Just when I had arrived very close to the seawater, I sensed a bird on the sea. It was a Red-throated Loon (Gavia stellata), nice bird to end my great morning and the 'magic' long weekend. 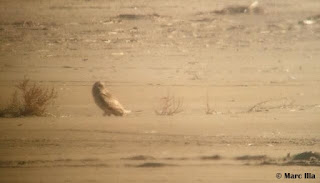 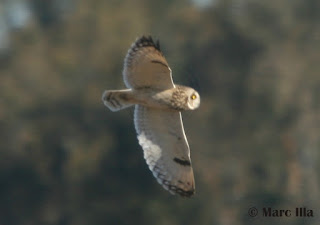 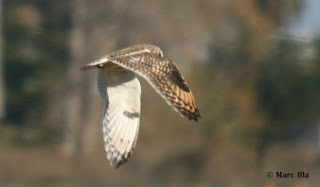 Let's see if we can do this every December!
Posted by Marc Illa at 12:17 PM