Some days ago I passed a morning on Llobregat Delta and it was so funny. Last Thursday I went there again, with Joan Manubens and Bernat Ferrer. Altough was a windy day, we could see some interesting birds!

We visited only Cal Tet area. Firstly, we saw the Spoonbill (Platalea leucorodia) close to the last Llobregat's bridge, with 18 Flamingos (Phoenicopterus roseus) and some gulls (predominantly Mediterranean and Black-headed), that we couldn't see properly because of the distance and the wind.

Then, we visited Cal Nani meadows, a very interesting place for waders... It was full of Water Pipits (Anthus spinoletta), +40, and also some Meadow Pipits (Anthus pratensis), White Wagtails (Motacilla alba alba) (not one yarrellii...) and Common Snipes (Gallinago gallinago). The origin of wintering Water Pipits in Catalonia is basically unknown. It supposed that the major part of wintering birds along the coast are birds from Pyrenees, but a small part may be Central European. I will try to ring some Water Pipits in my local patch...
When we arrived in the Sabogal hide, looking the Cal Tet lake, I said to Bernat and Joan: 'Let's see who is the first that can find another Hirundinidae between the Crag Martins...'. This dates is quite typical to see flocks of some sets of ten Crag Martins (Ptyonoprogne rupestris) flying away, and it's also typical to find between them any other birds undercovereds. Finally it was me who found... a House Martin (Delichon urbicum), maybe the less unexpected Hirundinidae. 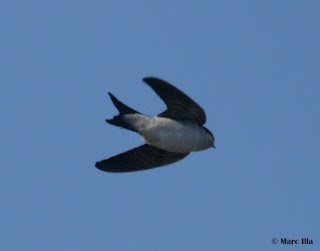 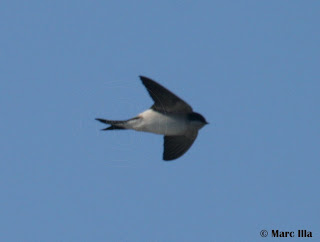 Later, we spent some time enjoying Goldcrests (Regulus regulus) and Firecrests (Regulus ignicapillus) in Arana pine forest. We also saw lots of Chiffchaffs (Phylloscopus collybita) everywhere, I think some of them could be starting its migrations... Another House Martin appeared there, also between Crag Martins!

We saw a Ruff (Philomachus pugnax) on Arana beach and, in Cal Tet lake, the same as ever... lots of Coots (Fulica atra), Red-crested Pochards (Netta rufina) and 2 Black-necked Grebes (Podiceps nigricollis). Photos below: 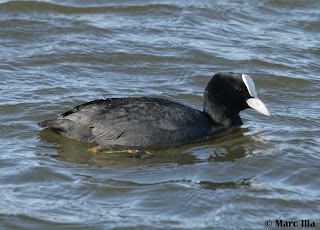 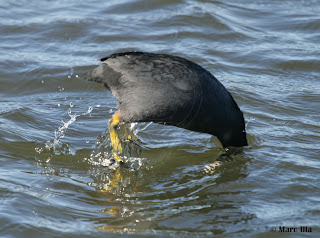 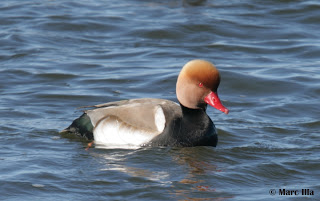