After a cyclogenesis has passed, some interesting birds are seen, coming from northern countries. The most noticeable species is the little 'invasion' of Pied Wagtails (Motacilla alba yarrellii) into Iberian Peninsula. Although is a regular wintering bird on the north (Bay of Biscay), is a rarity in Catalonia and other parts of Spain. The Catalan Comitee has only a few sightings accepted.

ID a yarrelli could be a very easy thing, but usually it's not. Most of birds appearing here are 1st winters, so are more dificult to identify than the unmistakable adult males... 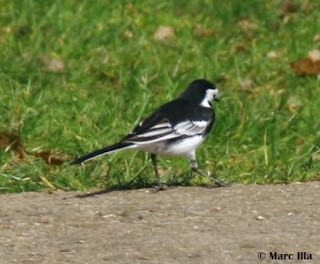 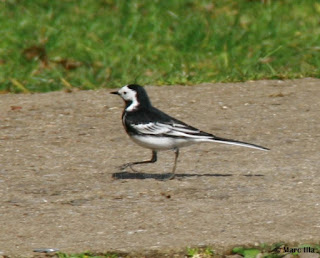 Marcel found 3 yarrelliis last week close to Llobregat Delta, in a big agricultural zone. Josep Ramoneda and me decided to go there in order to look for more yarrelliis, and then we'll go to Llobregat Delta. Maybe five minutes after start searching, we found an adult female Pied Wagtail. Typical bird darker than alba, no contrast between mantle and head feathers, GCs with big amount of white, black rump reaching the smallest tertial...

Later, we saw an interesting 1st winter Wagtail, with a marked face pattern throughout the cheeks. The rest of the plumage indicated White Wagtail, so we didn't worry about more. About half an hour later, we found another interesting bird showing an atypical face pattern. I took some photos...


Llobregat Delta opens at 10 o'clock. We started looking for some birds in the last bridge on Llobregat river. There was a 1w Spoonbill (Platalea leucorodia) with 14 Greater Flamingos (Phoenicopterus roseus). Also 18 Shelducks (Tadorna tadorna), a 1w Common Gull (Larus canus) and a 1w Slender-billed Gull (Larus genei) (very scarce there in winter).

We saw some Goldcrests (Regulus regulus), at least 13, walking down the river. 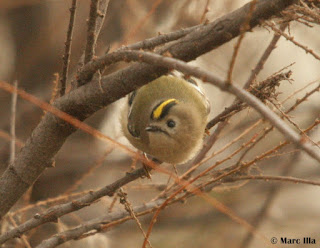 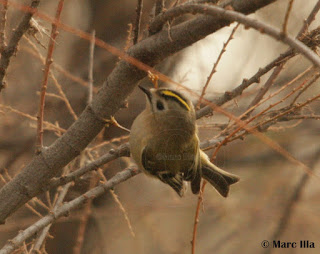 We didn't see nothing interesing on the Arana beach... about a hundred Mediterranean Gulls (Larus melanocephalus), 11 Northern Gannets (Morus bassanus) and 224 Northern Lapwings (Vanellus vanellus) was the best. We arrived at Cal Tet observatory then. The lake was, as ever, full of Eurasian Coots (Fulica atra), and there were also +40 Red-crested Pochards (Netta rufina). 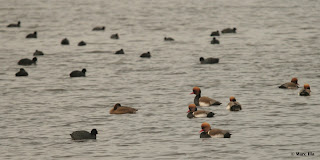 An Eurasian Bittern (Botaurus stellaris) show up his head between the reeds, and a Black-necked Grebe (Podiceps nigricollis) was diving in front us, but the lake was so calm. We thought there are not many ducks in Cal Tet. We saw only a few Gadwalls (Anas strepera), Northern Shovelers (Anas clypeata) and Teals (Anas crecca)... I think no more than 15 individuals for each species.
In the reedbeds, we saw a couple Ferruginous Duck (Aythya nyroca) (male and female) that had been seen for some days. 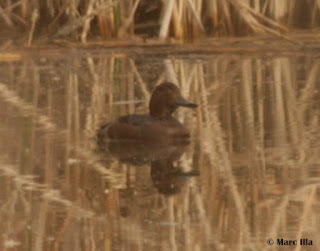 Nice morning!, I'd like to repeat very soon!
Posted by Marc Illa at 1:10 PM