Just the day after come back home I started a mini ringing campaign in my local patch. I didn't get great expectations but is always nice to ring some migrant stuff in your usual birdwatching place. Falsterbo got me lots of nice new ways of thinking about birds and now it's time to work this on my own.

Some (no more than 10 actually) daily migrating Tree Pipits (Anthus trivialis) and Yellow Wagtails (Motacilla flava) reminded me that mornings in Sweden that now I really miss... 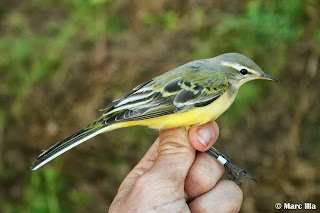 Now I'm again in the south, so I've met again some of that Southern species that I hadn't seen during the summer, like this Subalpine Warbler. 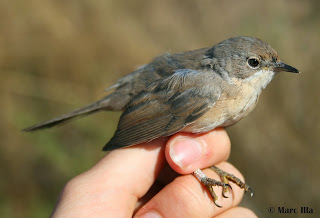 I've been catching just some birds every morning, but almost all of them were migrating birds, that really interested me. I trapped basically transaharan species:
But also two presaharan species!, that were firsts postnuptial sightings this autumn in my area.
The most interesting birds of these days were up to 7 Kingfishers (Alcedo atthis), 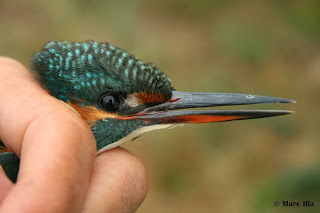 A very fat first-year Wryneck (Jynx torquilla) that was there for, at least, 3 days... 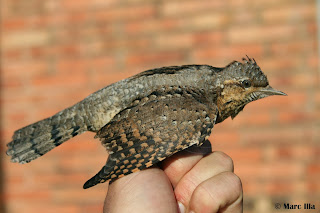 And up to 4 different Bluethroats (Luscinia svecica), that are quite scarce in my place! 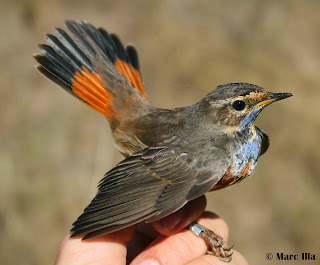 First-year svecicas are usually quite obvious, with disctintive buff spots on the tips of juvenile GCs and tertials and sometimes also in carpal and primary coverts and alula. But sometimes, like what happens with some first-year Nightingales (L.megarhynchos), their 'juvenile spots' aren't well-marked and can be aged wrongly as adults. Also, a few adults can show a slight spot... So it's worth to keep this in mind to age every bird properly.
My main interest with this campaing was to have a initial idea of how long is the stopover for different migrant species in my local patch. Many birds retrapped days after being ringed showed an interesting increase of weight and fat, so the place seems to be quite nice for them. Most of birds showed a realy good body condition before leave my place, like this really fat Reed Warbler and this also very fat Willow Warbler: 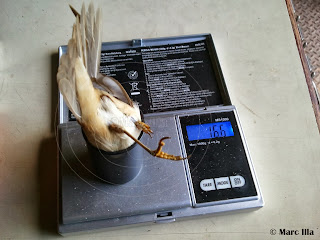 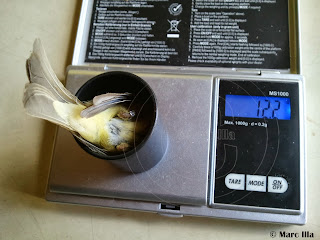 Raptor migration was also quite good (keeping in mind that when I say 'good' I mean good for my place...), with some Honey Buzzards (Pernis apivorus), Booted Eagles (Aquila pennata), Short-toed Snake Eagles (Circaetus gallicus) and Marsh Harriers (Circus aeruginosus) almost every day, and a nice Osprey (Pandion haliaetus) as the best one. Also, of course, some daily Sparrowhawks had to be there...

It was specially nice the 11th September's evening, when 37 White Storks (Ciconia ciconia) stopped in Santpedor, my hometown, to sleep a bit. Some of them were ringed, at least 10 birds from Germany and 2 from France. 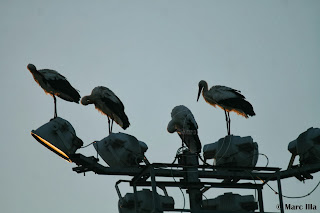 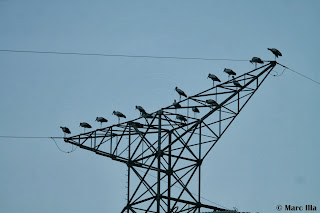 In previous posts I talked about Migrant Hawkers (Aeshna mixta), that was the commonest species in Flommen's reedbed. The first sighting of this species was, by chance, last week, just two days after arrive home. 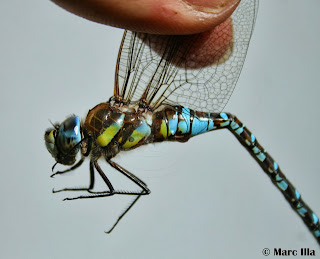 Talking about Falsterbo memories, and encouraged because of the success in the 'lamping' nights trapping Ducks and Coots, I managed to catch one! I'm definetely affected by this syndrome. 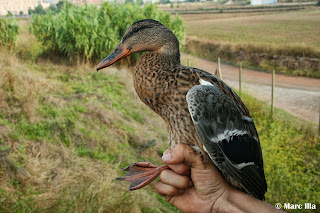 Email ThisBlogThis!Share to TwitterShare to FacebookShare to Pinterest
Labels: Ringing