Some weekends ago I stayed with some friends in Bernat's 'country house', that is surrounded by typical mediterranean forests and drylands, where I decided to set up some nets to catch something.


I had bet that we were going to catch about 15 birds, but already in the first netround we exceed this number. In total, we trapped 41 birds, that is not bad for a 'completely random place' in the middle of a really extensive and almost uniform habitat.

The most interesting bird to examine was an Eurasian Jay (Garrulus glandarius). 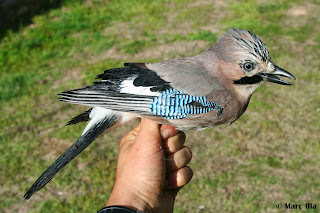 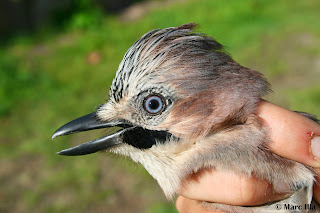 Ageing is always interesting, at least for me, because I've only handled a few. Look at this adult that I trapped this summer (somewhere in the middle of the post). As in that bird, this one showed bright blue coverts with parallel and well-defined black bars. Also the distance between them is almost the same in every case. 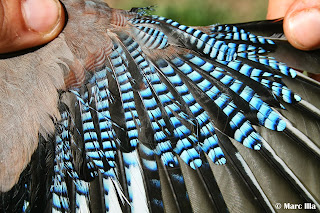 Following the 'Blue wings' title... Some weeks ago I trapped this Kingfisher (Alcedo atthis). It was already ringed, with one of my rings. As you can see, it's an obvious female. And as a good female, and with this greenish escapulars and mantle, it seemed initially first-year. 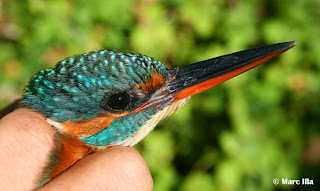 Later, already at home, I checked the ring number in my database. I had ringed this bird in the same place in 20th May 2013, as a second-year female (EURING 5). So, that bird did a postbreeding (her first one) arrested complete moult. This would suggest that 2nd-year birds can be aged also in December, and therefore, as 3rd-years (EURING 7) in spring...! I'll try to catch more in the next days...

It's known that adult Kingfishers sometimes do an arrested postbreeding moult, and when this happen with second-years, we will be able to age them after this moult...
Posted by Marc Illa at 1:38 PM