On 17th December a Goosander (Mergus merganser) appeared close to my village, in a lake in the middle of a public park in Manresa. The place is typically good for ducks, grebes and stuff, because it's the biggest lake in the area. 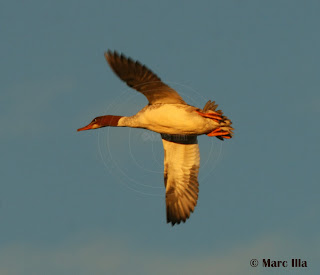 The bird have been seen every day except for two days. Who knows where the bird was... but the thing is that it is there again!
It was really confident, usually swimming with local Mallards (Anas platyrhynchos). As in northern Europe, the birds seemed to be 'at home' being in a public park with lots of people walking around..! 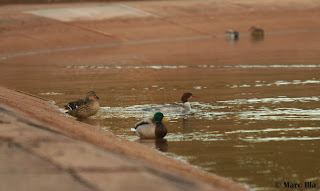 Two years ago (winter 2011 - 2012), we had an influx of mergansers in Spain, with specially some records in Catalonia. I saw my first Goosander then, a bird that had been seen in Manlleu, inland Catalonia and close to my village. In my opinion that bird was a 1w male: 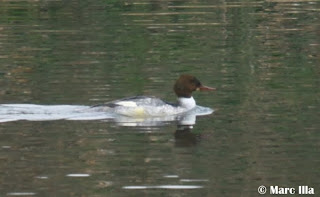 Then the question is: 'What about the Manresa bird?' 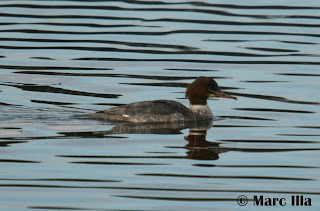 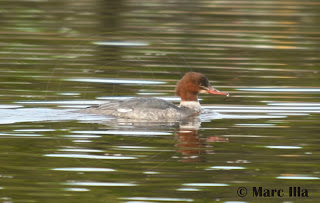 Looking at the bird when is swimming, the well-marked loral stripe is quite obvious. This is always present in juvenile birds, and I think it may be also typical of 1w. Looking at flanks properly, there wasn't any yellowish feather that could indicate male. I found quite hard to see if any flanks or mantle feathers were moulted... but at least there was any feather like the Manlleu bird. 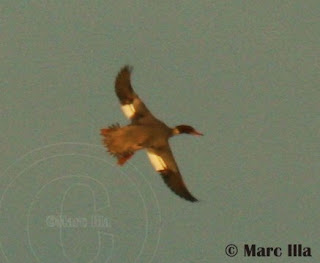 Following what Pyle says, Goosanders do a partial postjuvenile moult and they start to do a complete moult in after the first breeding season (in the second calendar-year). Nonetheless, and I'll copy literally what Pyle says, 'Beware of some HY/SY males do not acquire greenish, blackish, or white feathers until at least Feb-May (and sometimes Sep) and can be difficult to sex by plumage aspect' (HY/SY means 1cy/2cy). So, keeping this in mind, the bird would be called as 'female-type'.

But I'm quite convinced that the Manresa merganser is a 1w female. Apart of the white loral stripe that might be good for 1w, legs are pale-orangish, the bill hook is white (I wonder if this means anything but in some photos I've seen on Internet, these feature is present in birds with a very marked loral stripe), and also the nape feathers are short, but a bit longer than the Manlleu bird. I'm not sure about this thing about these feathers, but I've been looking at some photos and it's length seems to be age and sex related.

Lots of people came to see the bird and I tried to find some photos of the wing. We finally got some photos of the wing. Again, following Pyle, the secondaries and GCs pattern fix with a 1w, with a difuse blackish tip in GCs and absent is SS. In some photos (like the one below), primaries seems to be a bit pale. Maybe another good trait for 1w?
Last Saturday, José Portillo, that is doing the Big Year in Spain (and who has seen 413 birds this year!!!!), came to see the 414. A crazy number that is the result of lots of trips to every corner in Spain. And he has seen already 415 species today... Some other friends came to see the Goosander and we ate something while we were looking at 'her'.

Have good Christmas days!!!
Posted by Marc Illa at 8:41 AM