More than one month ago, I started a great winning streak. Last week's Tuesday, after the really nice birding weekend in the Ebre Delta, I decided to go to Aiguamolls de l'Empordà, in the northeast corner of Catalonia, because I had one day without university classes.

While I was in the Ebre Delta I received some 'bird alerts' about a Bean Goose (Anser fabalis) that had been found there. Also, a Goosander (Mergus merganser) and a Red-throated Diver (Gavia stellata) had been seen during the weekend, so I though it was a good place to go.

The Cortalet pond was full of ducks and geese, as it should be. I was surprised about the number of Wigeons (Anas penelope). I saw 86 birds, that is not a bad number. Most of geese were sleeping, but I started to look carefully each one. In the meanwhile, some Shovelers (Anas clyepata) were really close to the hide. 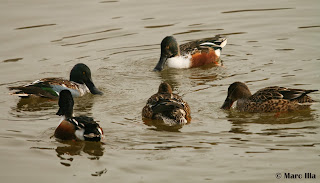 Some geese started to get closer... 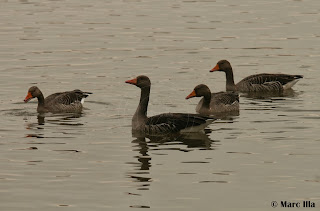 The first not-Greylag Goose that I found was the putative hybrid between Barnacle and Canada Goose (Branta leucopsis x canadensis). This bird was found for first time in 11th October, and it will be there until the end of the winter. It's interesting to see how the 'shape' of these hybrids remind features of hutchinsii. 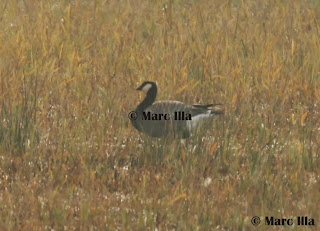 I counted 260 Greylag Geese (Anser anser), and one of them was a bit weird. I was almost sure it was the Bean Goose, but the bird was 'sleeping' inside the lagoon, so I couldn't see the head neither the legs. I waited during some minuetes, and I was getting more and more sure that it was undoubtedly the Bean Goose. Actually, I had never seen one before (I tried it on Fasterbo but I left before they arrived), so I think that if I had some doubts, it was because I had never seen one. It's quite noticiable the flank colouration, with a more broad and well-defined white stripe, the darker centres of mantle feathers and the broad white marks intertials edges (as you might be suspecting, the bird was an adult). Also, primaries are a bit longer than Greylags, and when you see the bird resting, you can see that they're equal or longer than the tail feathers. 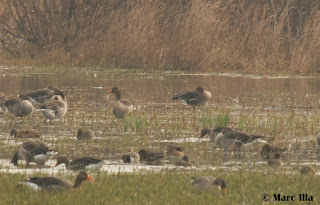 Finally, the Bean Goose raised the head and I could enjoy it. I think it was really nice to find it when it was sleeping, I think it was the best way to learn about this 'new' species for me. Minutes after, the 2 first-winters Greater White-fronted Geese (Anser albifrons) that appeared on 31st October. This species has became regular in this area, with some birds overwintering during last years...

When the Bean Goose showed me their head, I was invaded by an strange feeling. The orange are on the bill was restricted near the tip, like a rossicus, but we know that some fabalis can have this bill designs as well. This Siberian ssp. had never been seen in Catalonia, so this would be the first... I managed to check the bill shape but I had an impression that I was to longer for rossicus. Actually, the bird had a short and string neck, but I though it was normal...
Now it seems that this bird is an actual rossicus. I reccomend to read Marcel's post (he went there three days after me). When I went back home I remembered the same BF post that Marcel is talking about. Who knows from where this bird is coming...

We moved to another hide, looking still the Cortalet lagoon. There was a flock of 15 Flamingos (Phoenicopterus roseus), and also 5 Northern Pintails (Anas acuta). 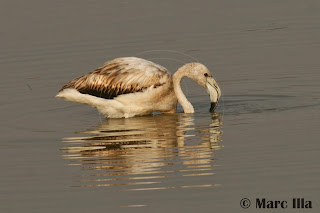 If in the other observtory I was distracted with Shovelers, then my pastime where Great Cormorants (Phalacrocorax carbo). If they show me their moult limits in this way... it's impossible to not take a look!

We left Cortalet and we followed the way to the beach. We stopped to see some Fallow Deers (Dama dama) that were resting in a meadow. We saw 35 of them, mainly females and young deers but also two nice males. 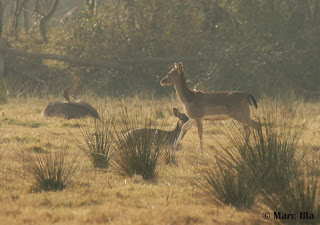 Matà meadows were almost empty of waders, but plenty of Reed Buntings (Emberiza schoeniclus). I think we saw about 80 birds between the spider webs! 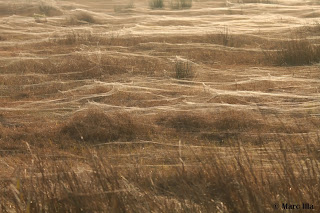 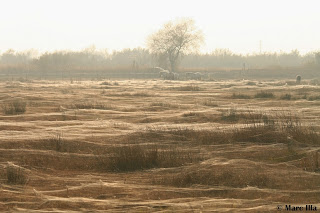 Asa every winter, we did a quick visit to the Common Teals (Anas crecca) in the Bruel hide. Some of them usually rest just in front of the observatory, and it's always nice to take a couple of pictures... 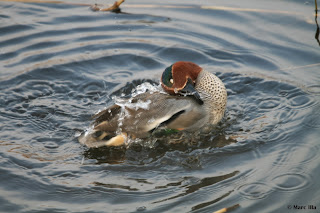 We reached the beach in the midday. The sea was really calm, almost flat, so perfect for Divers and stuff. Firstly, I saw a couple of Velvet Scoters (Melanitta fusca) that had been observed for some days there, and just after I found the RT Diver (Gavia stellata) that was found the last weekend. With the town of Roses in the background, I found 3 Black-throated Divers (Gavia arctica), that are always common in this Bay. Going back to the stellata, doing a quick check to the closest part of the sea, 2 RT Divers appeared, really really close! I got very excited then, but even more when I found again the same individual that I had seen before, and even more when a 4th bird appeared. Then, I saw another further Diver that at couldn't ID at first sight. It got closer, just behind the stellatas, and it was... a Great Northern Diver (Gavia immer)!