In the last blogpost I posted some photos of a Common Snipe (Gallinago gallinago). I wanted to do a something specially for that bird, and here it is!

It was a second-year (EURING 5). It can be a little bit tricky I think, but this bird have some interesting things. I have to say thank you to Stephen Menzie for his comments on ageing! 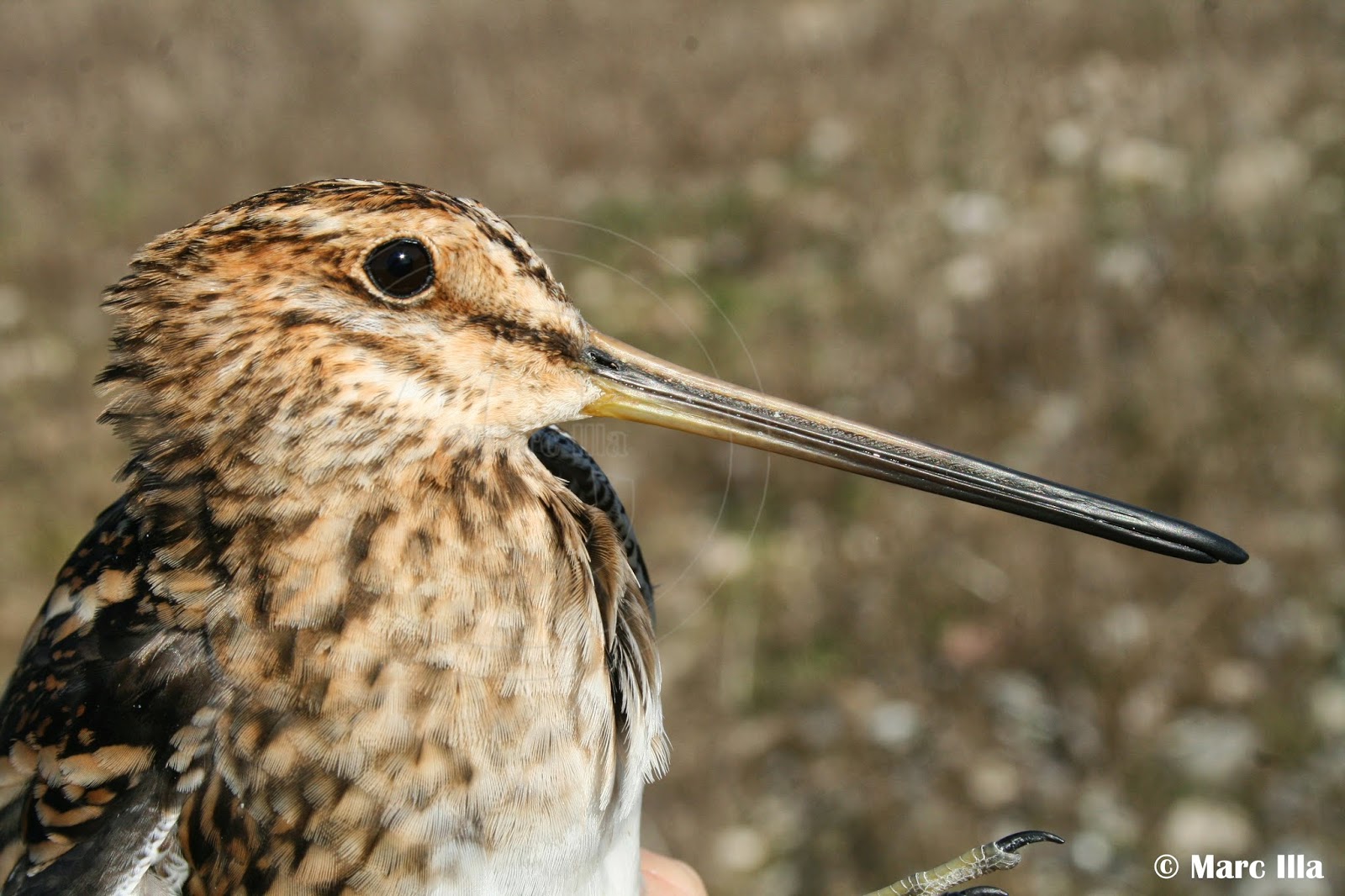 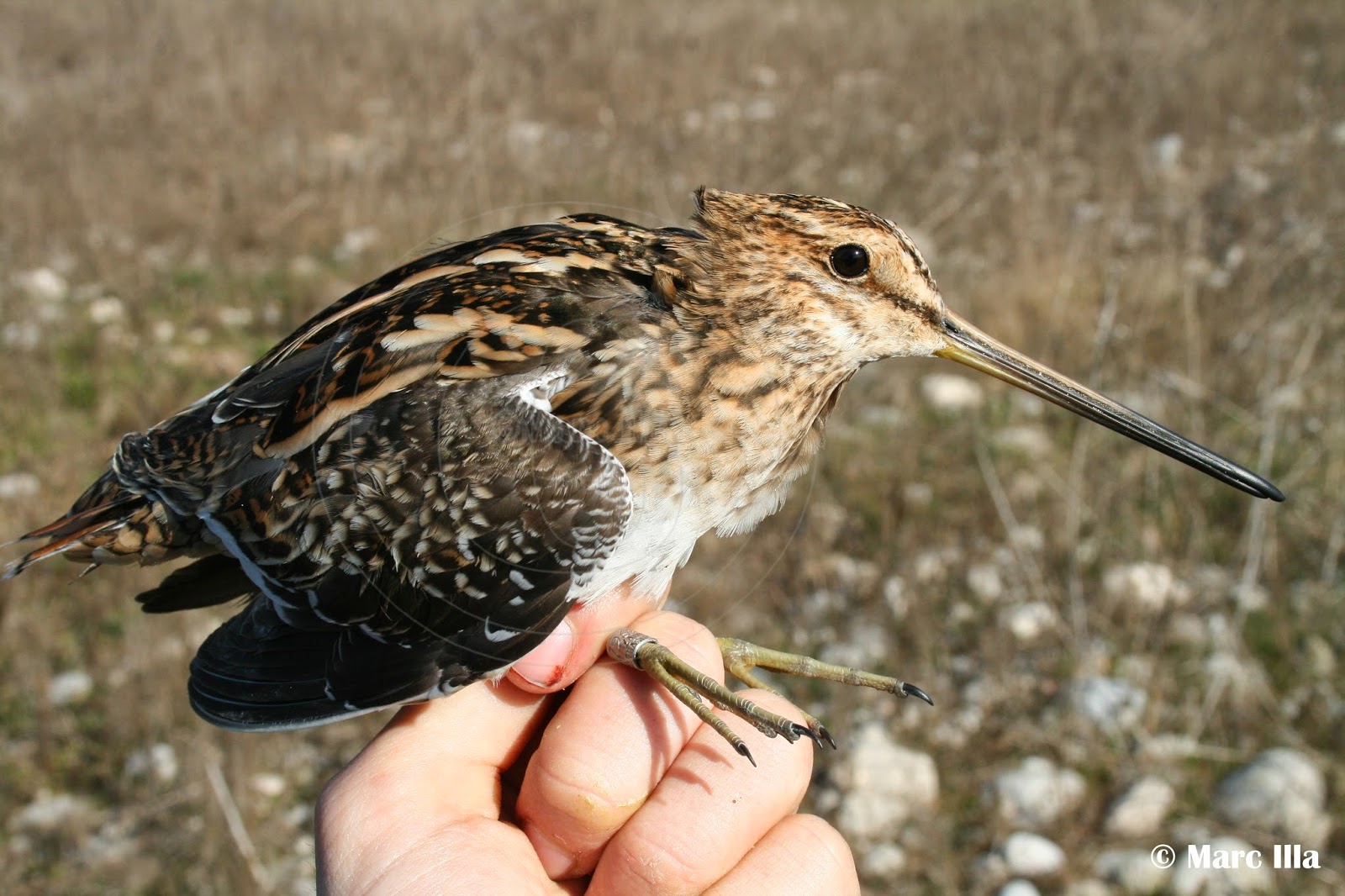 As in many wader species, juveniles do a partial postjuvenile moult and adults a complete postbreeding moult, with a partial prebreeding for both age-classes. The main question I had when I aged it was 'How extensive would be the prebreeding moult?'. Following Cramp et al. (1983), both adults and 1w usually moult many body feathers, scapulars, some wing coverts (lesser and median) and maybe tertials. They moult between February and May, and actually that bird was just moulting a few feathers (and for that there were just a little few prenuptial feathers).

The coverts pattern can be sometimes hypnotist if you look at it too much time. During the autumn is probably easier, but now in spring, most of the juvenile feathers had been replaced. Still, it seems that maybe 1w have a different upper wing covert pattern, a 'postjuvenile pattern'. But the thing, at least in this bird, in on the marginal coverts. There, you can see some retained feathers that i would expect to be juvenile. 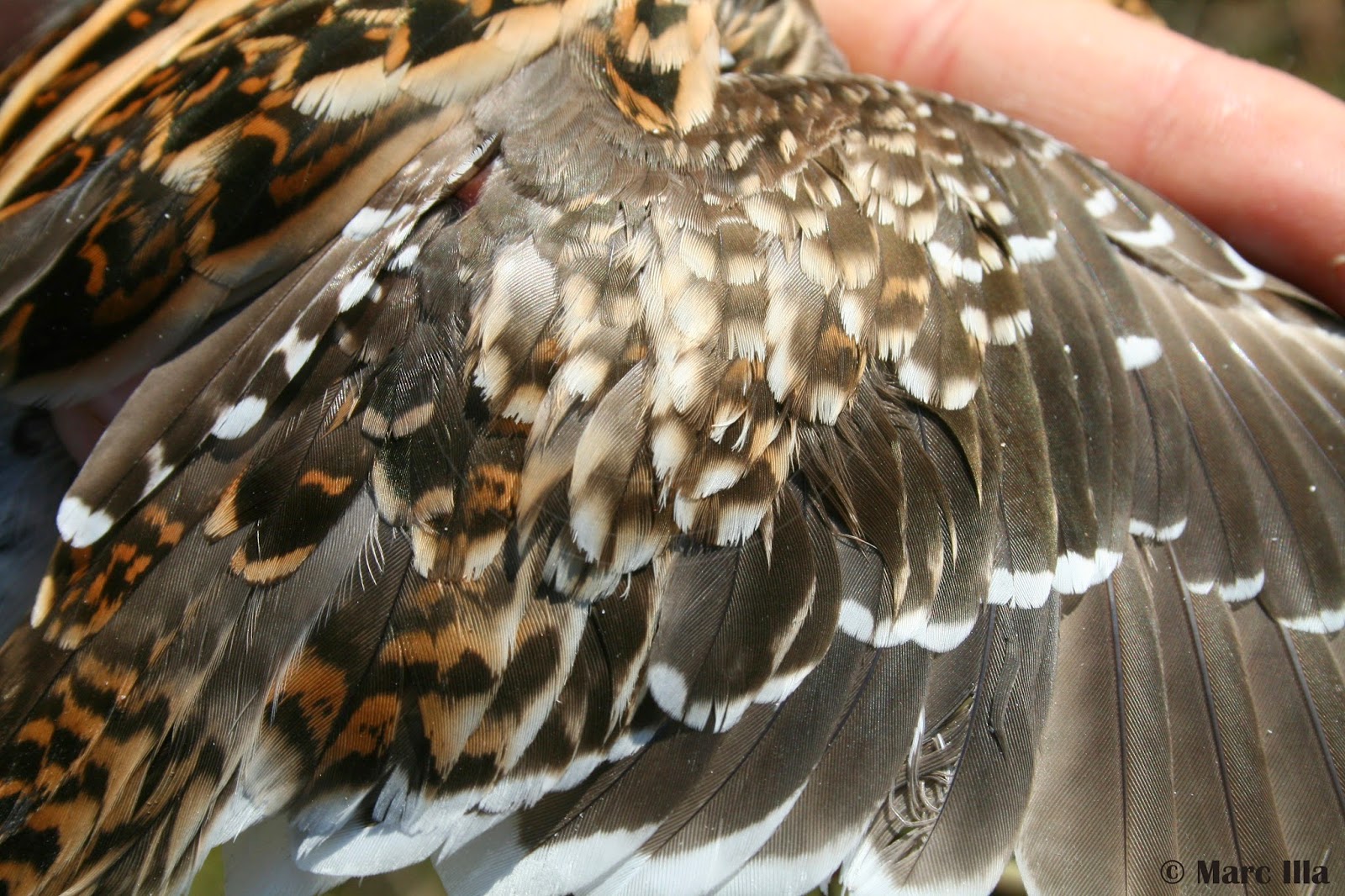 Tertials and tail are usually moulted by spring so they may not be as useful as they can be in autumn. Also the same with scapulars and matle feathers. 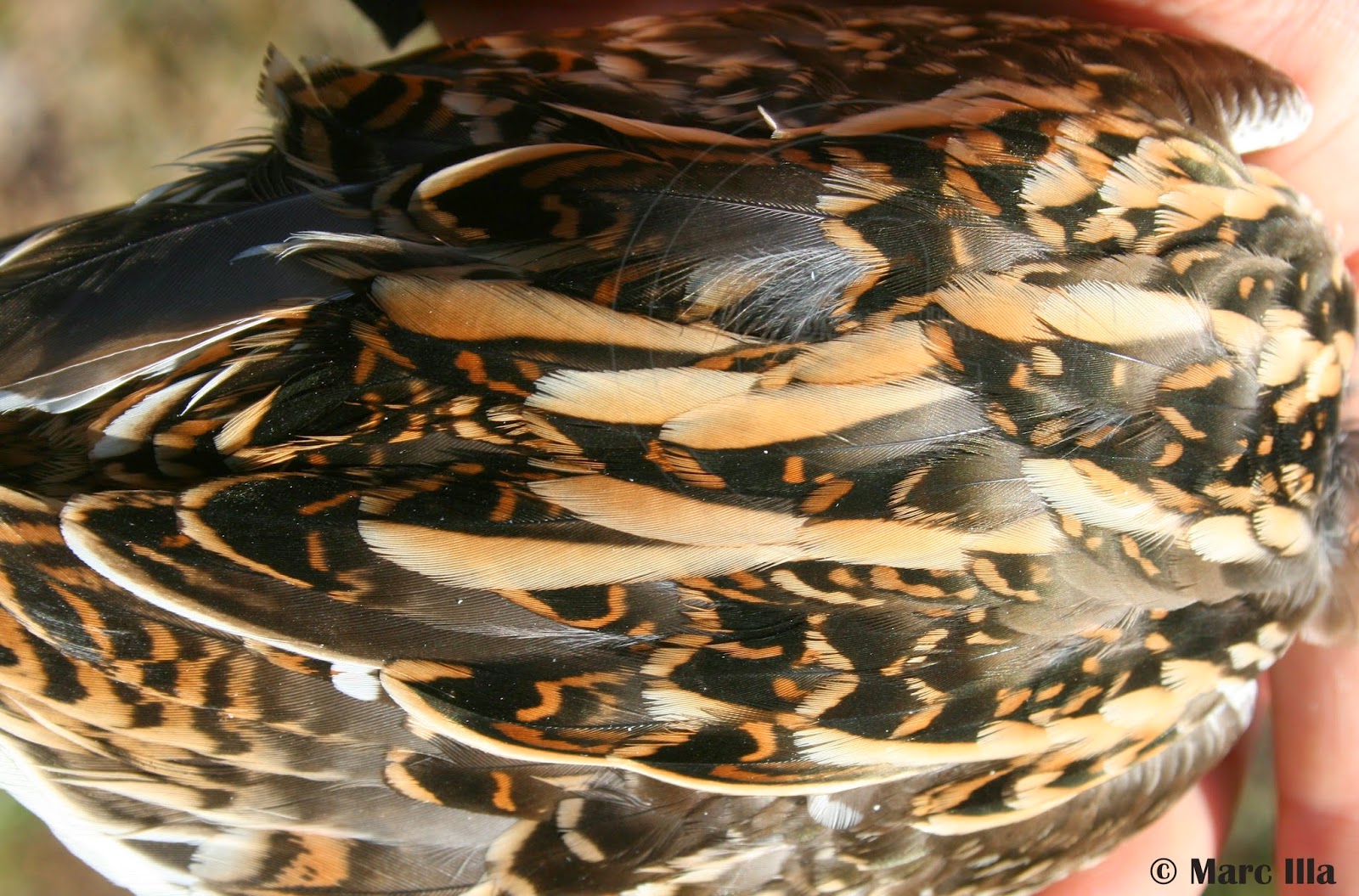 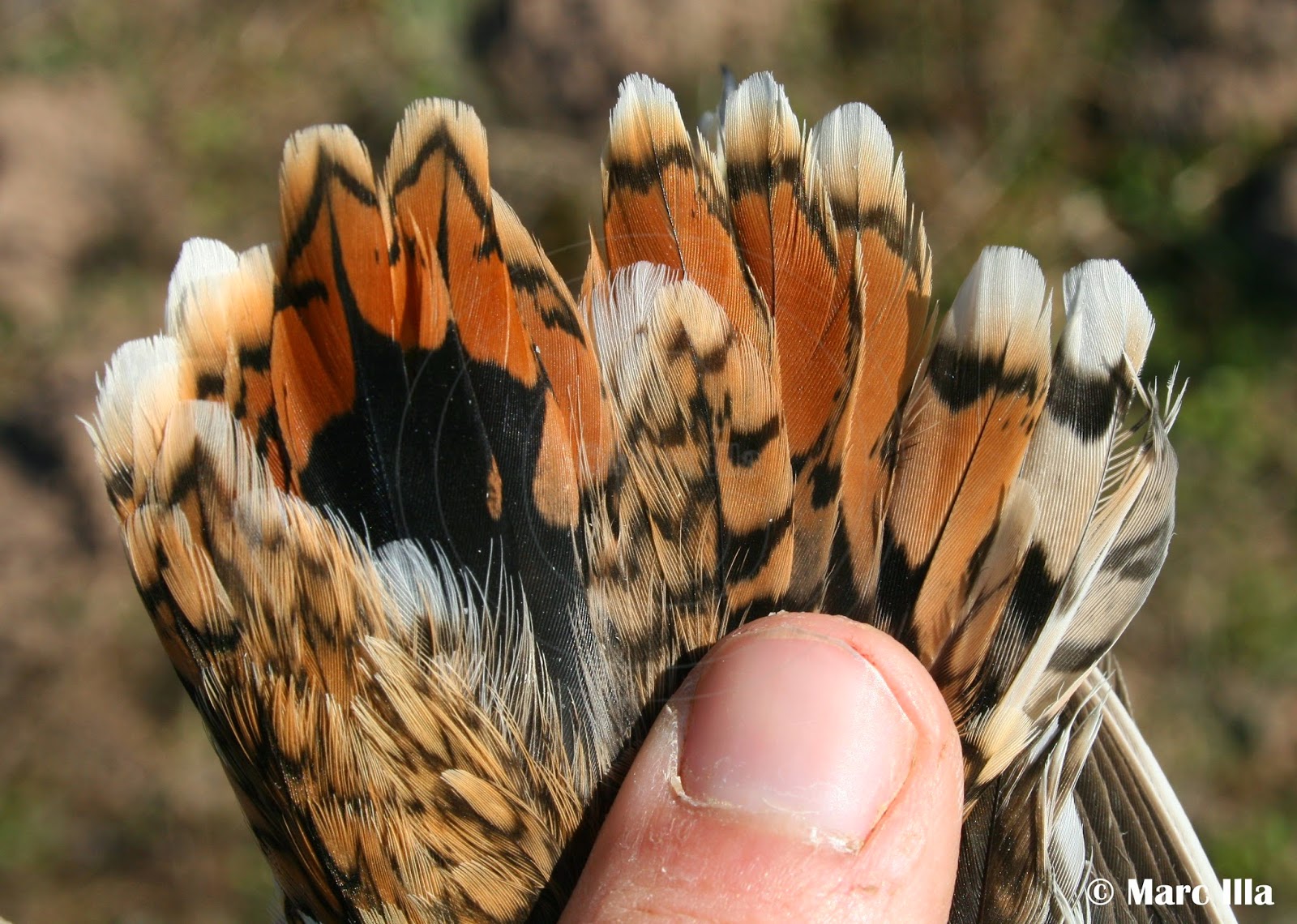 Looking at the whole wing properly, three other features supported the second-year theory. One was the wear on primaries, also the thin white border on primary coverts, but the other is maybe the most relevant one... 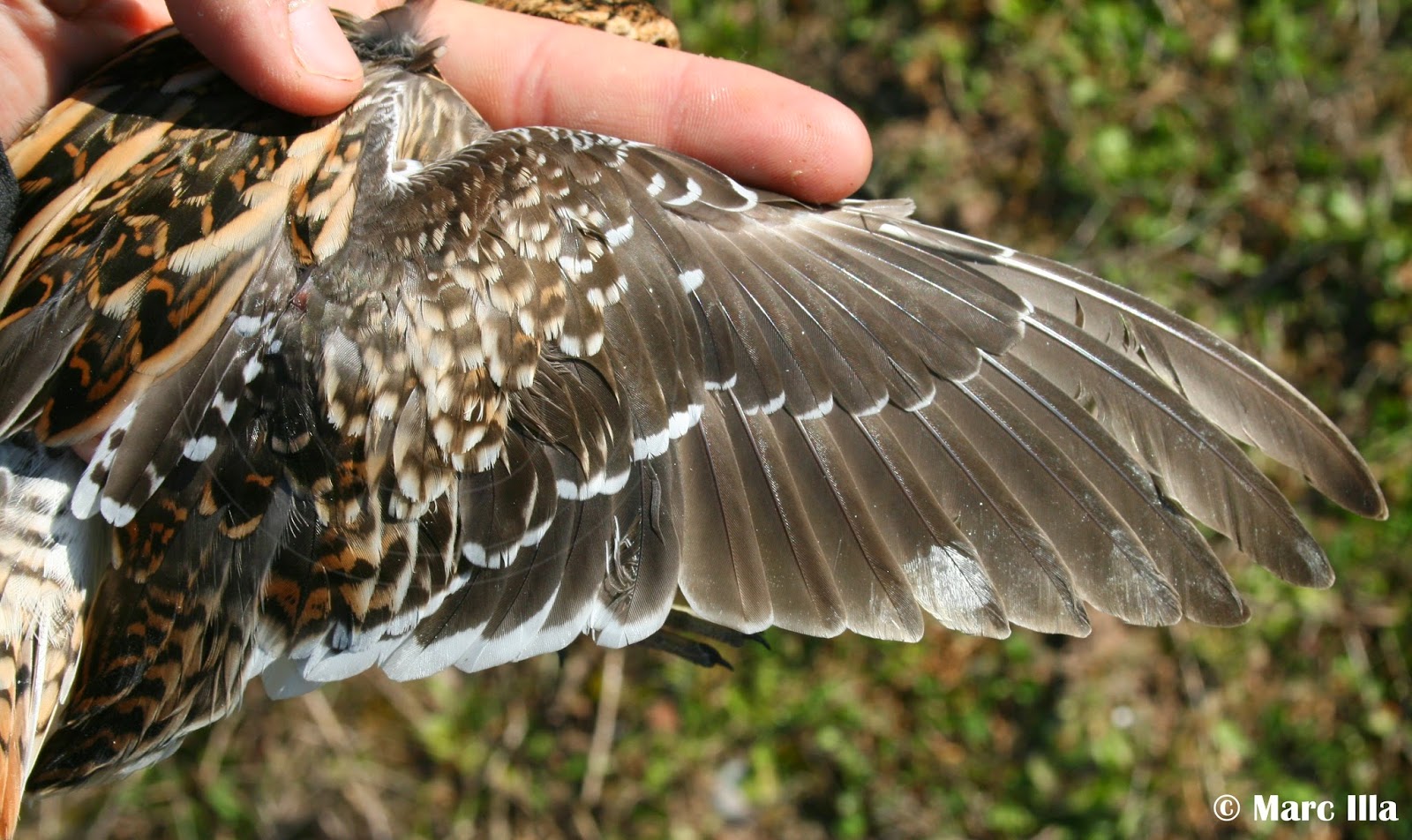 Here you have a comparision with alulas from an adult (left) and a 1st-year (right) taken in Falsterbo last August: 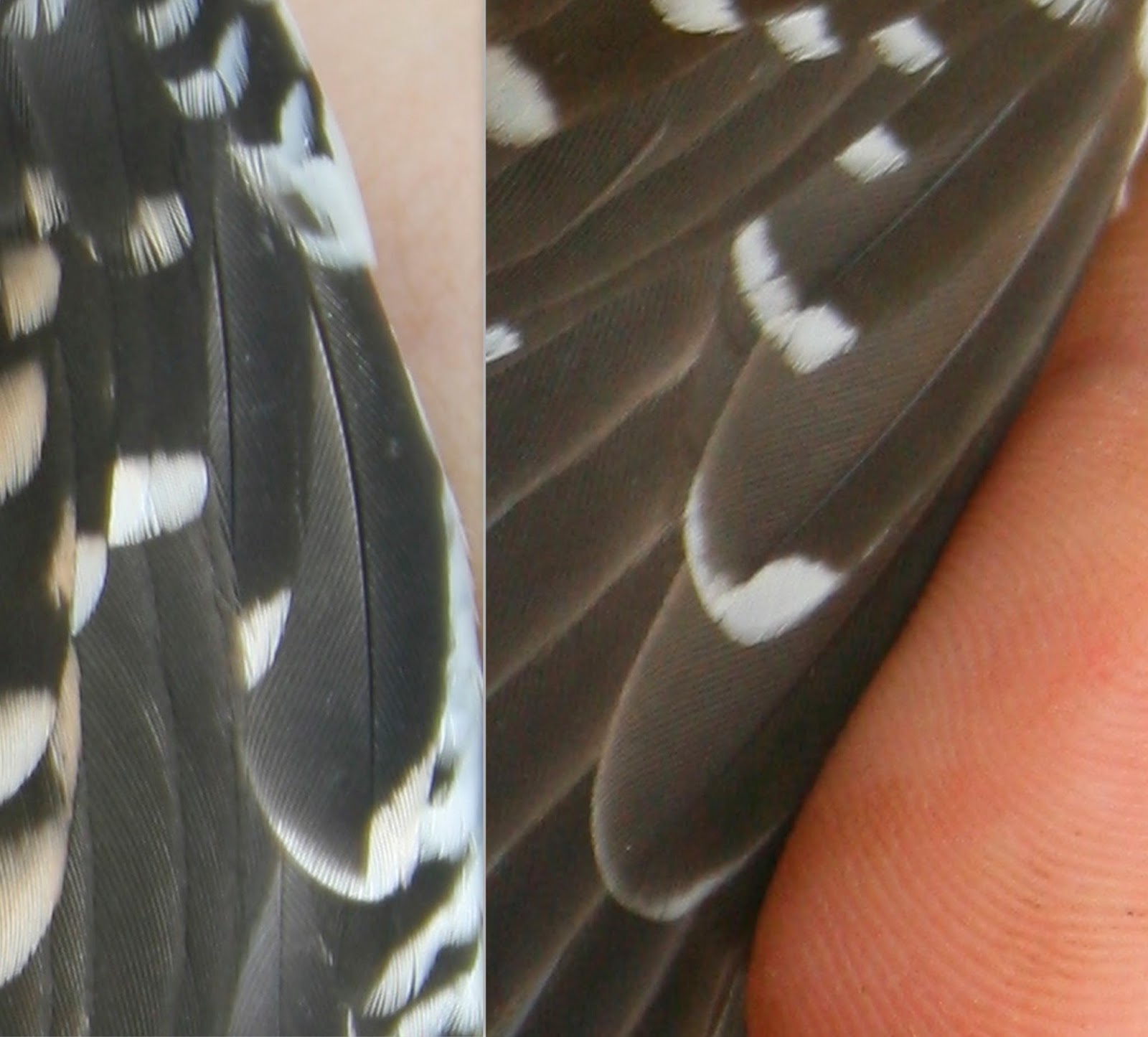 Comparing with our bird... (left wing to the right, and right wing to the left... just to compare with the photo above!) 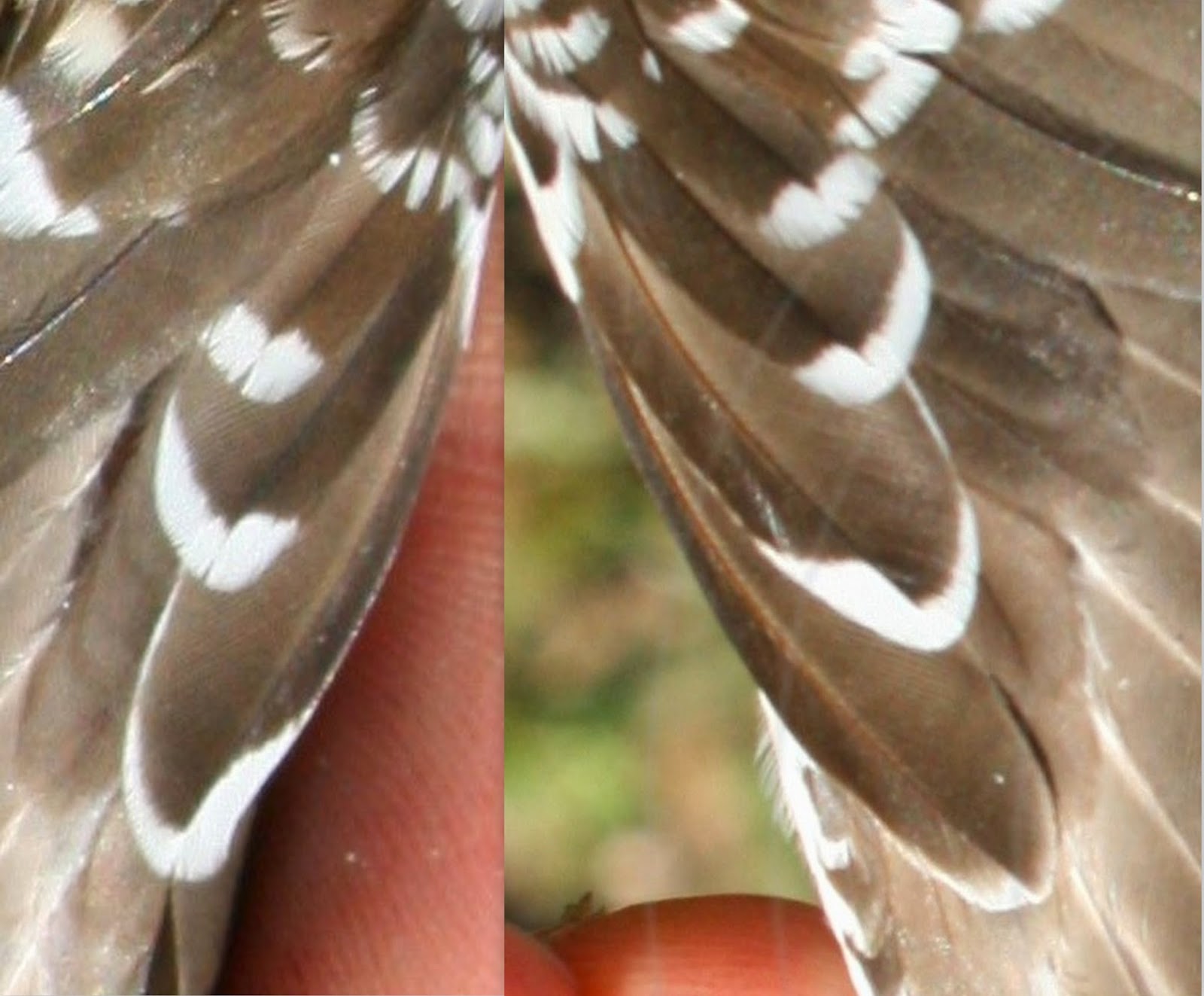 Last Sunday I went again to Aiguamoll de la Sala again, and instead of a Snipe, we trapped a Green Sandpiper (Tringa ochropus)!
After the Snipe thing, and although they're quite different, I think that many things are the same with this ochropus. Looking at the whole wing at first sight, some things attracted my attention. 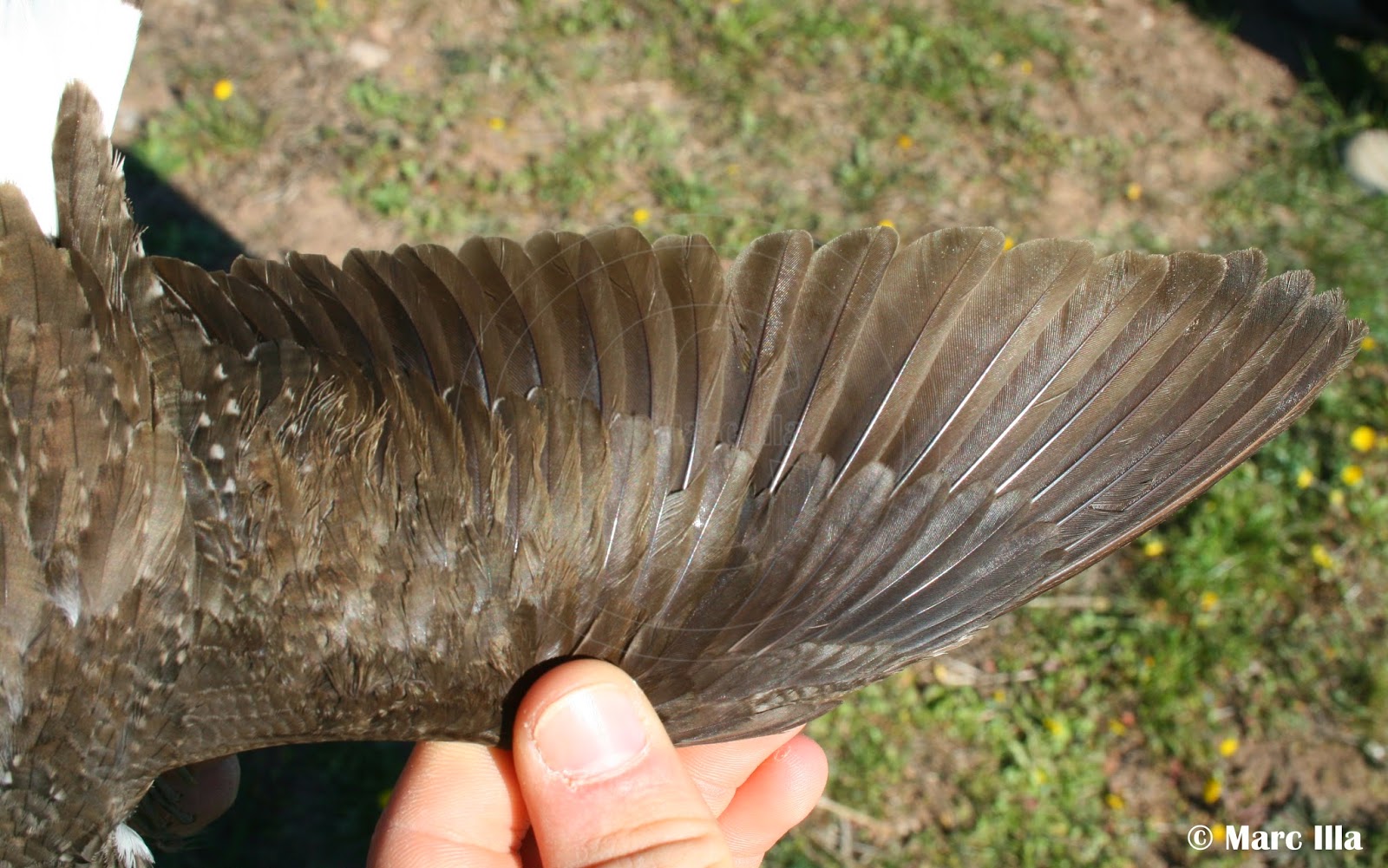 'Juvenile' feathers have bigger white spots, anf this is specially noticeable on tertials. Nonetheless, they seemed to be moulted (and it makes sense with the moult strategy). 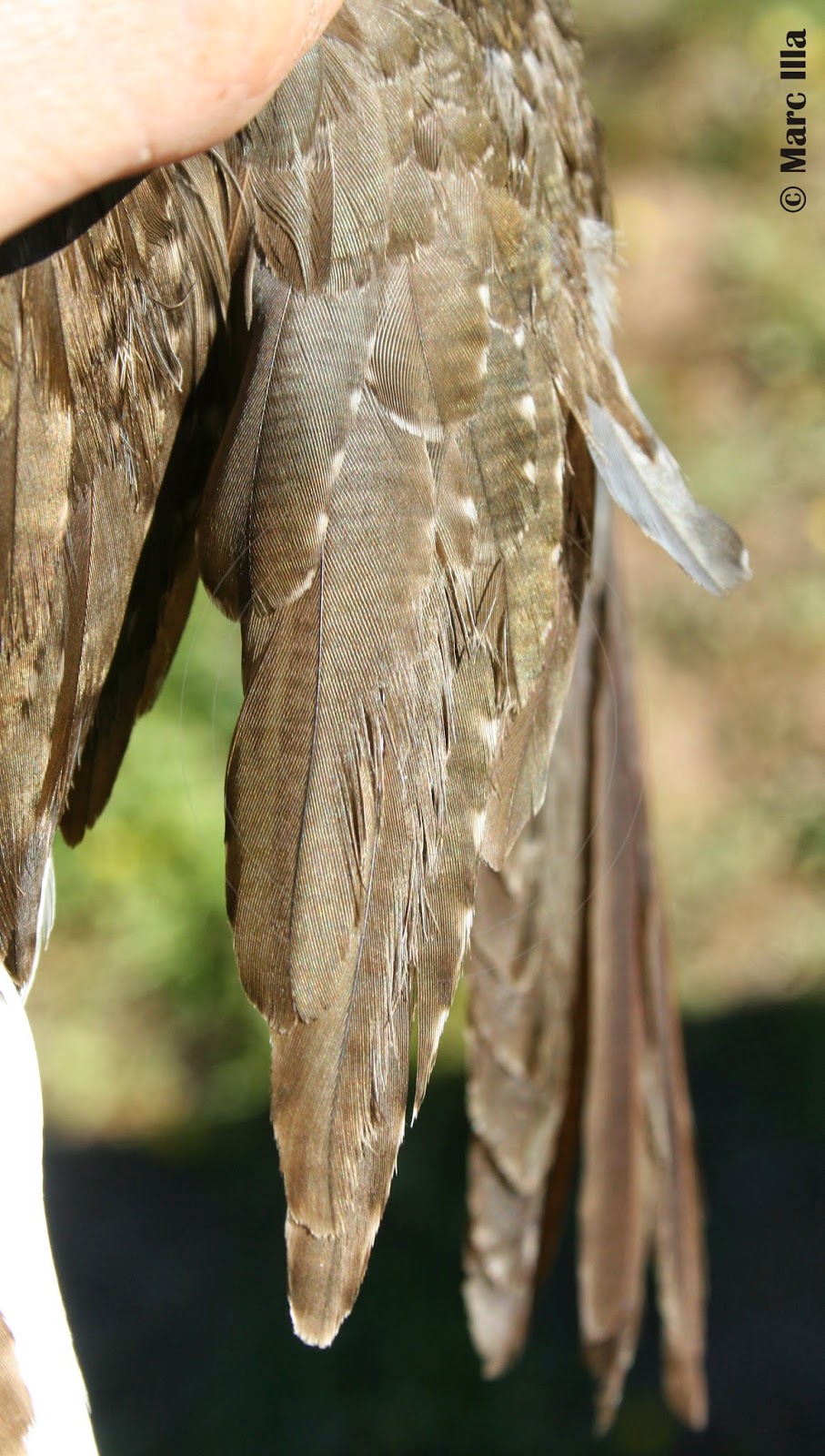 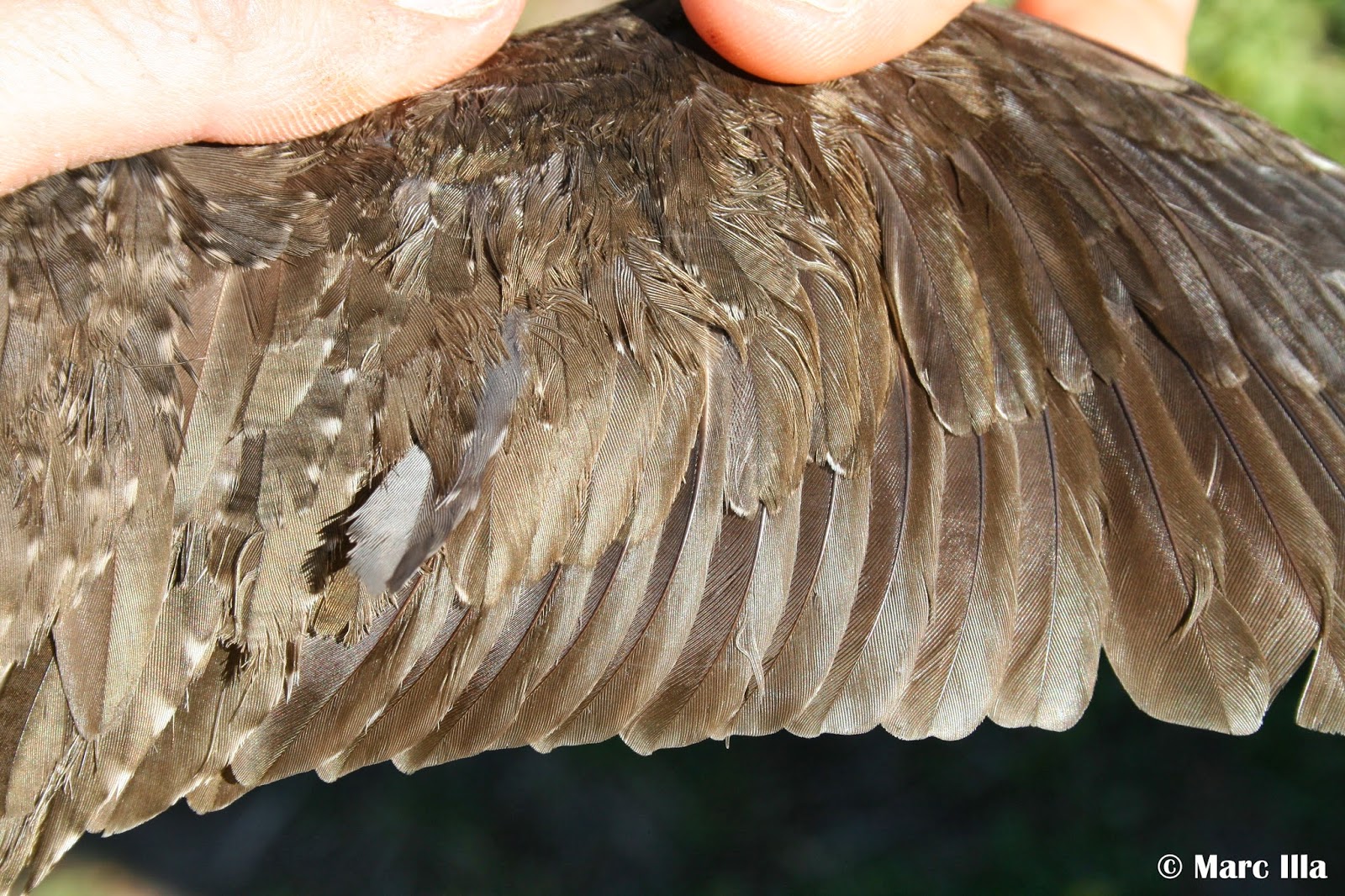 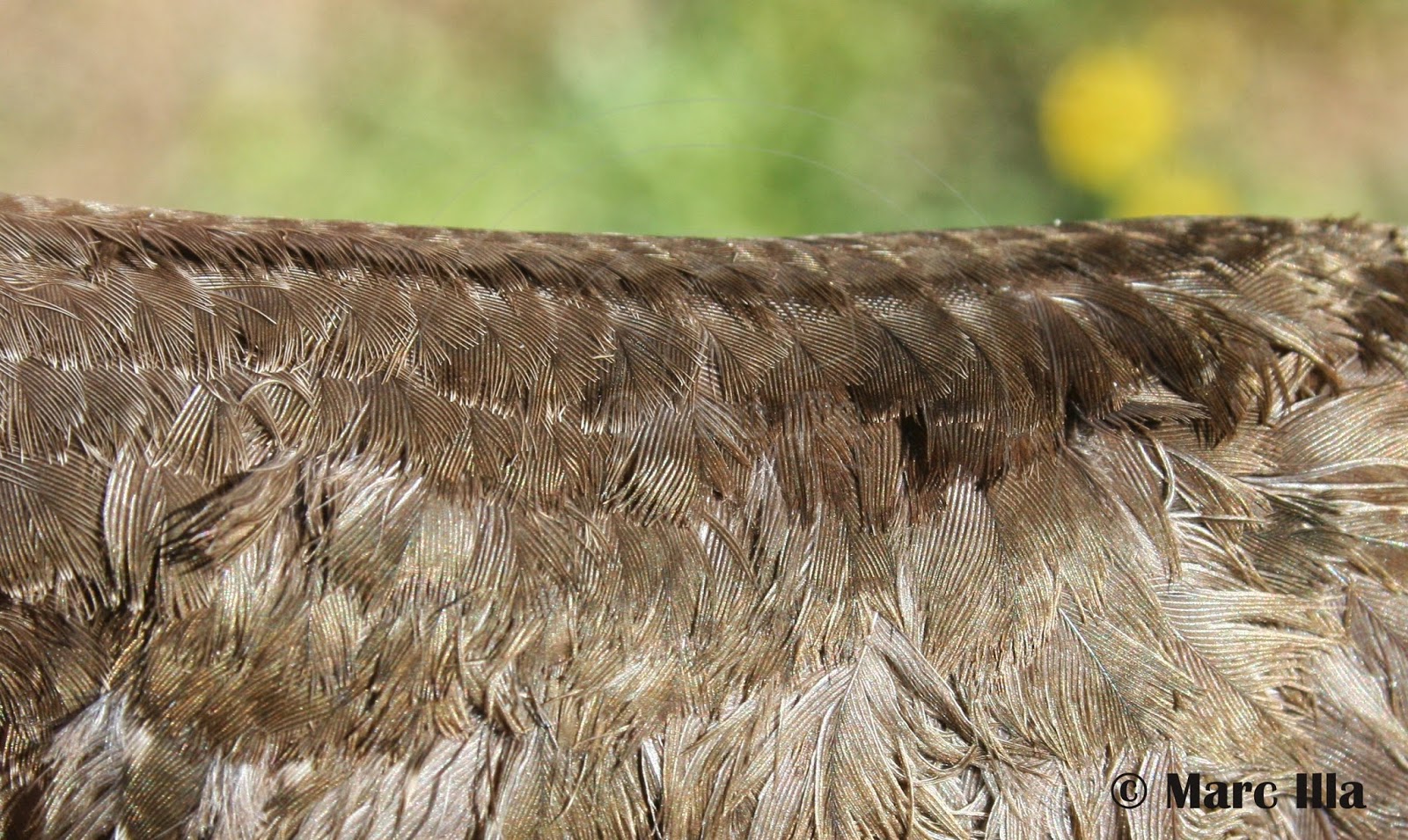 There was the same on the back, with different generations easy to spot.

Also, primaries (and secondaries) were quite worn. Tip of outermost primaries was pointed and not as wide as I would expect in an adult. So everything indicates to me that's a second-year (EURING 5). 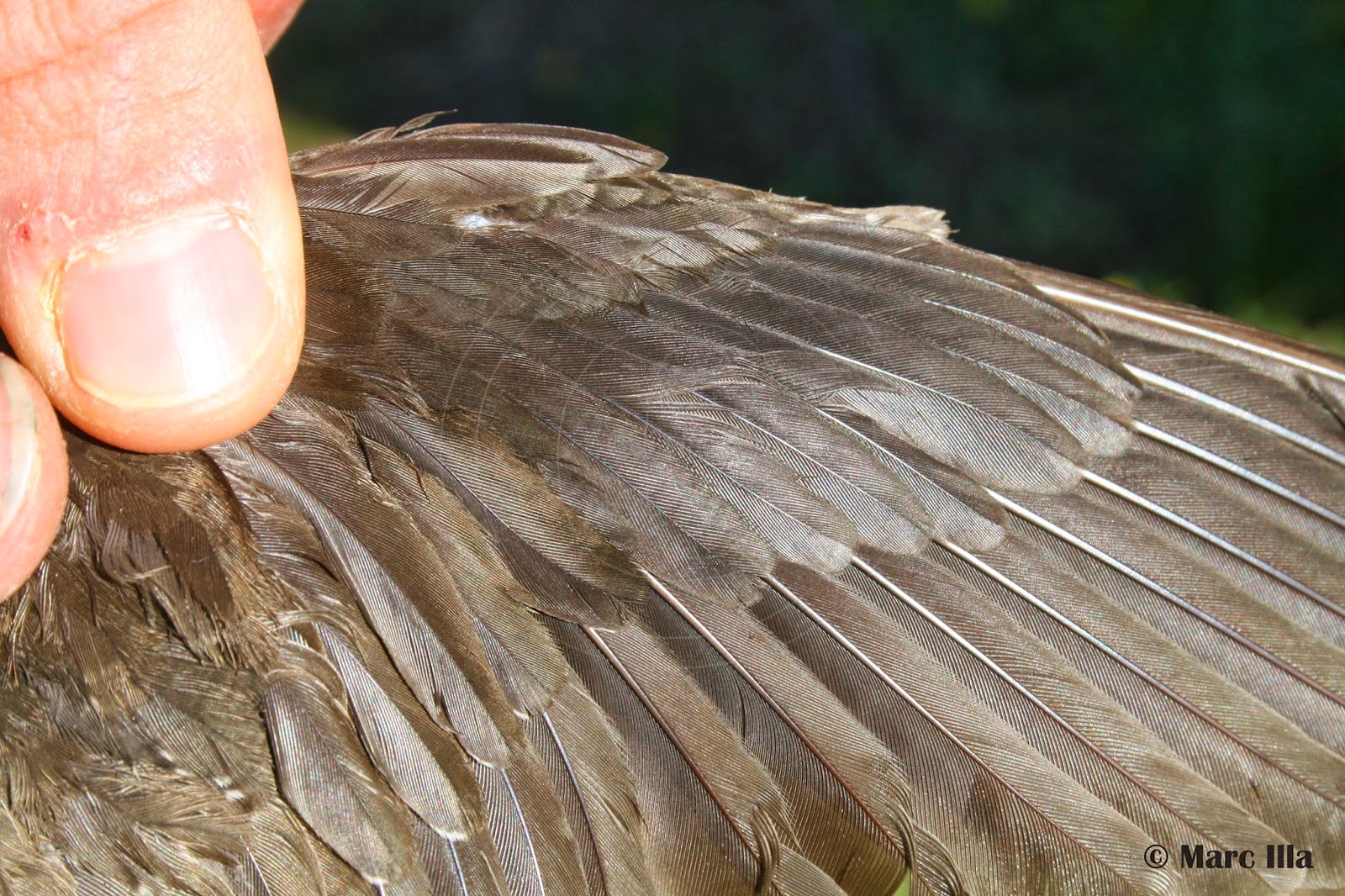 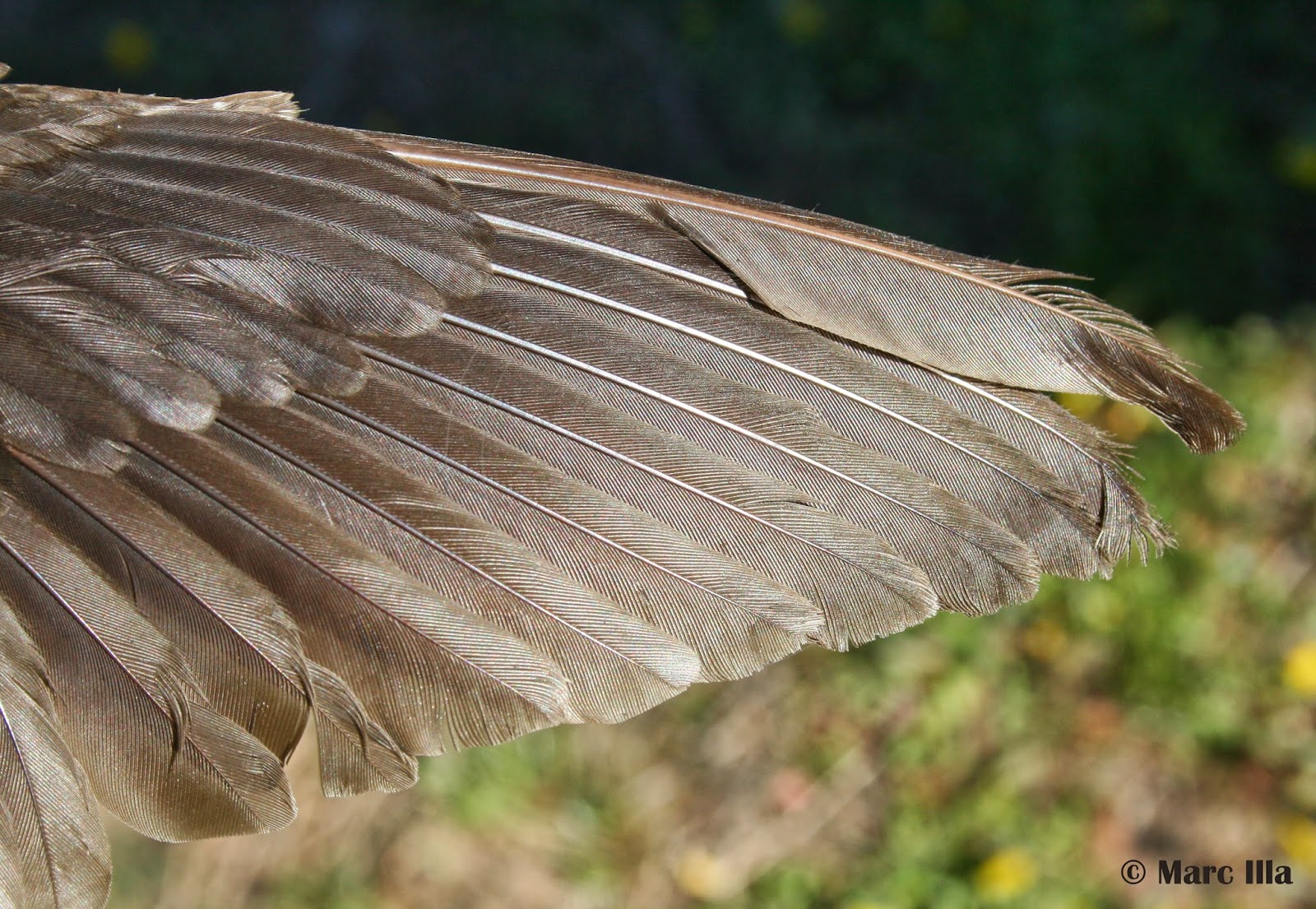 Tail seems to be not so relevant in ageing, but is nice to see. 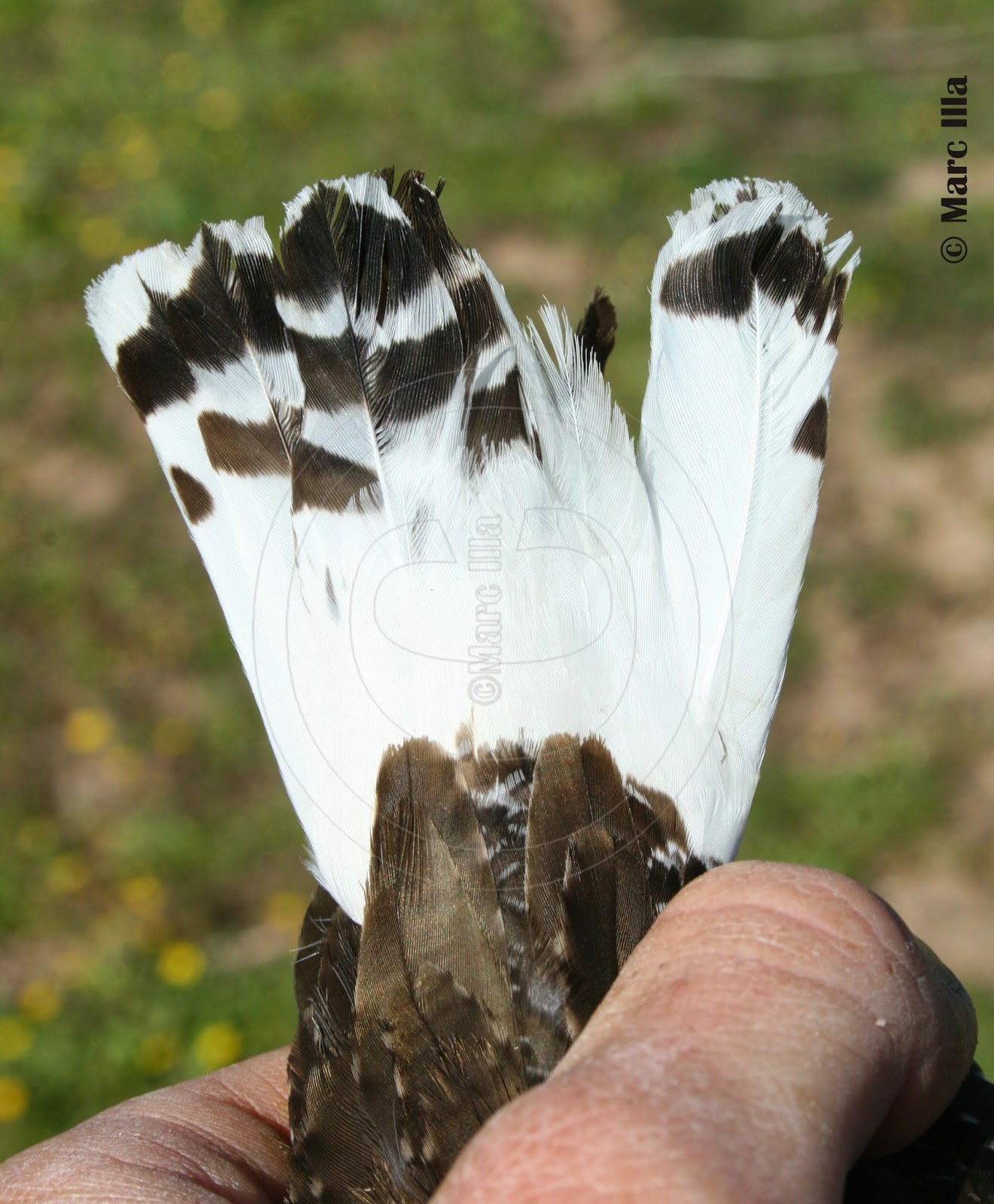 There was also some presumably retained feathers in head and breast, sometimes also seemed to be three generations. 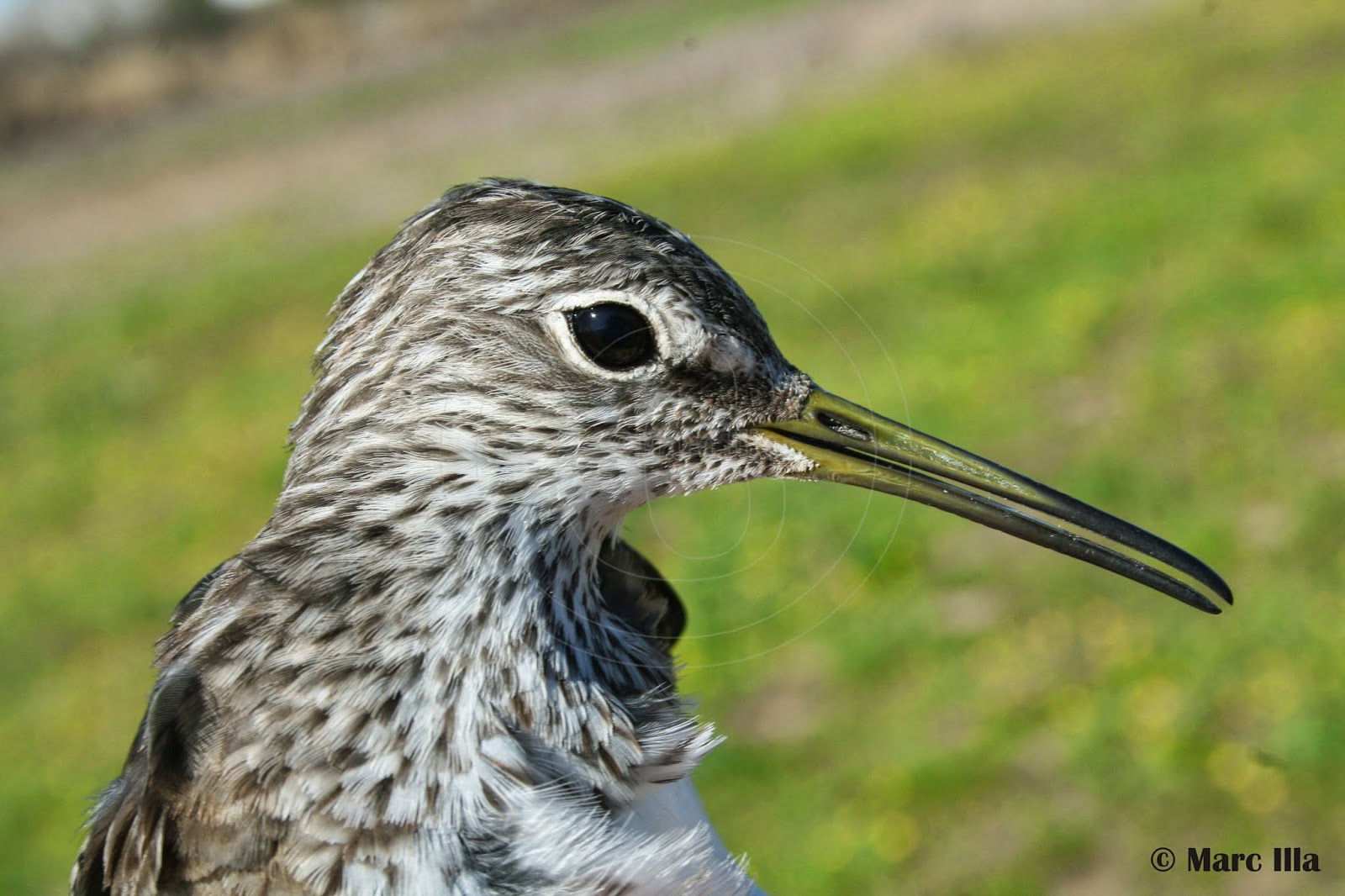 Bernat came with me, and we had a really pleasant ringing morning. We catched another nice male Bluethroat (Luscinia svecica), an adult this time. And also this nice Zitting Cisticola (Cisticola juncidis). 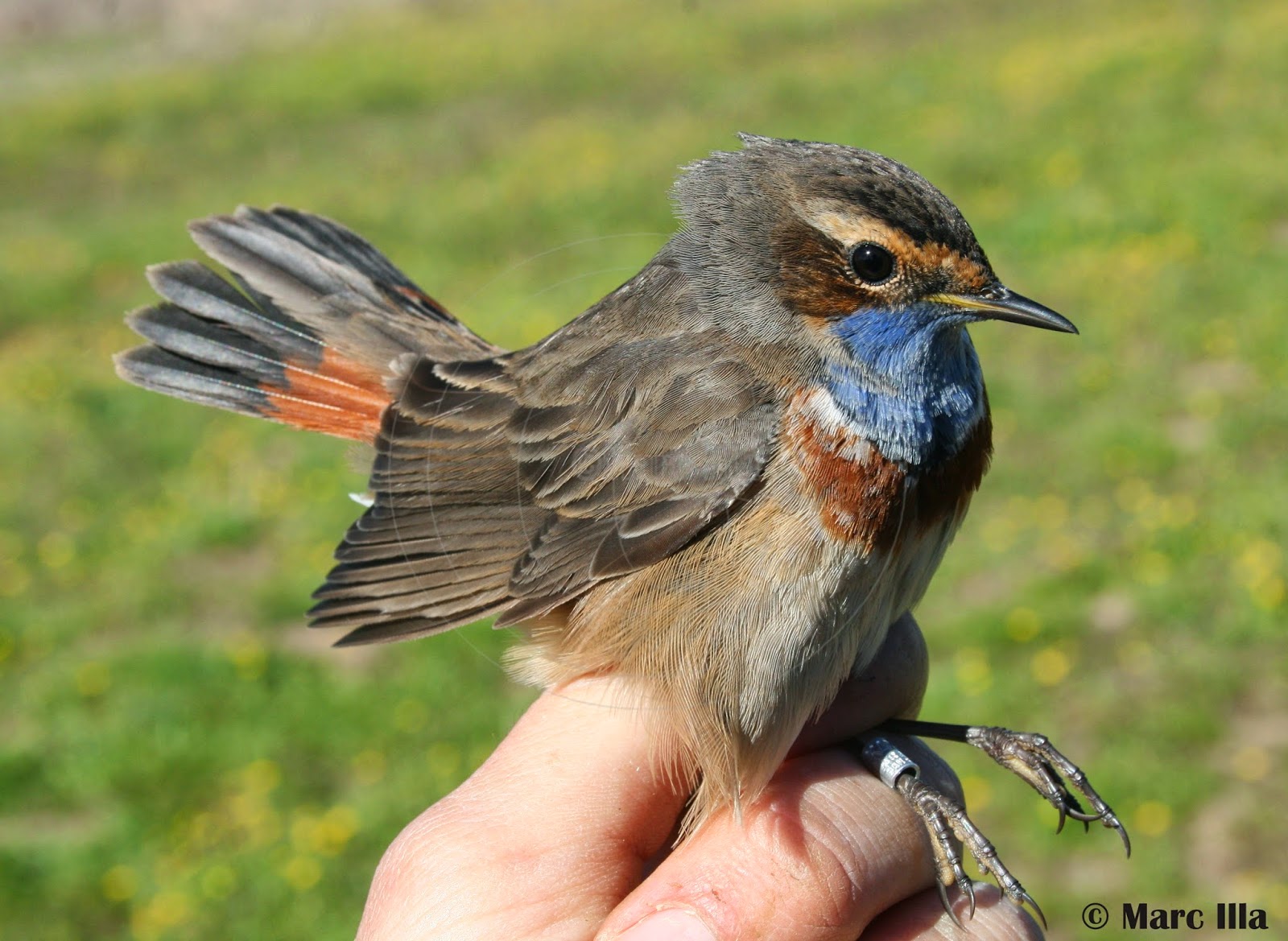 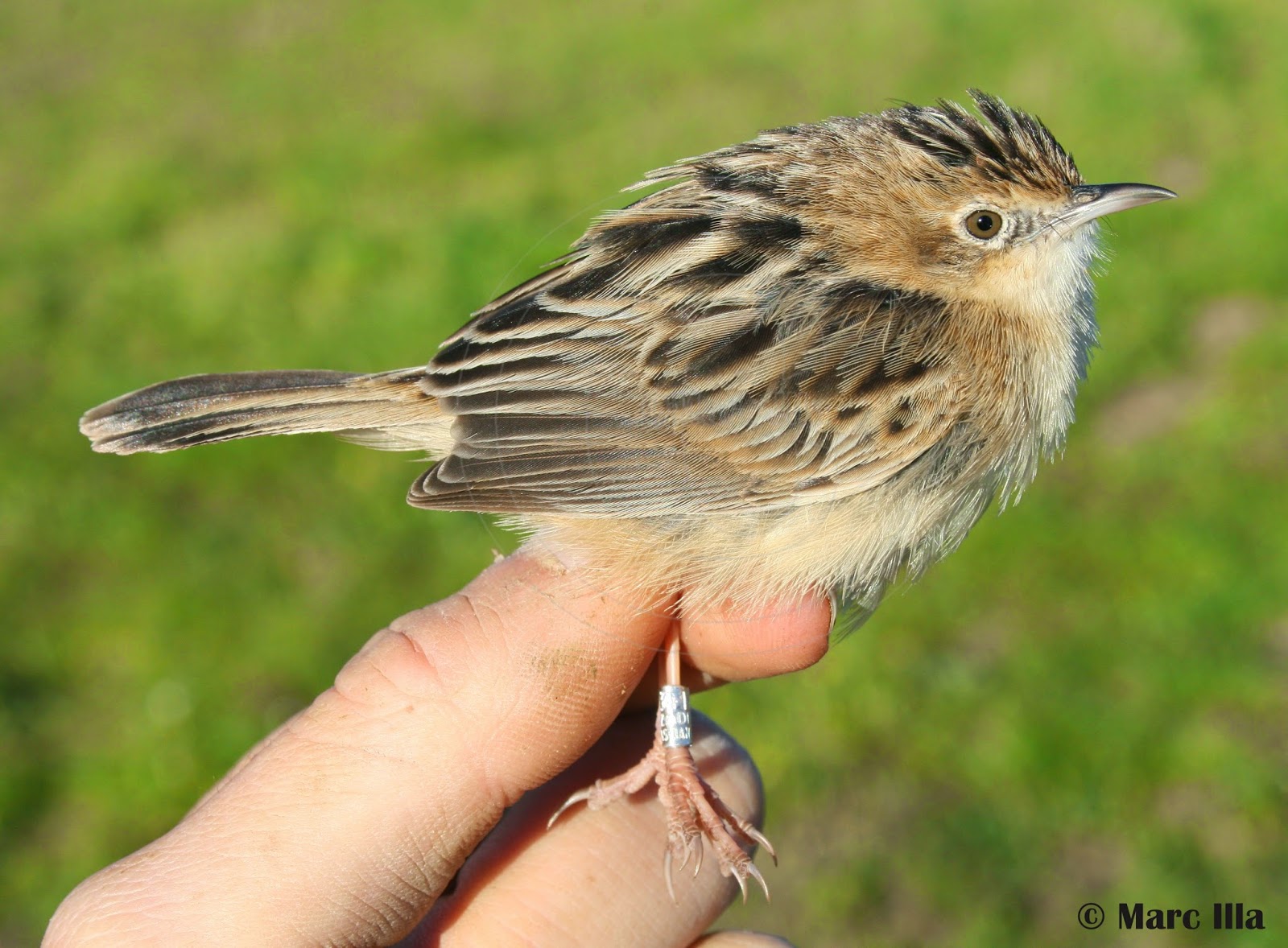 Around 11:40 the raptor migration started. This place is in the middle of a bid drylands area, but many raptors follow the Llobregat river to cross some mountains on the way to North. The wind was on the right direction to push migrants to follow the river, and because of that, we saw 10 Short-toed Snake Eagles (Circaetus gallicus), a Marsh Harrier (Circus aeruginosus), 4 Black Kites (Milvus migrans) and a Red Kite (Milvus milvus). Also 11 Sparrowhawks (Accipiter nisus), 5 White Storks (Ciconia ciconia) and some other usual stuff. I was really excited when I saw an Osprey (Pandion haliaetus) really close (nice bird for inland Catalonia), and also a Black Stork (Ciconia nigra)!! 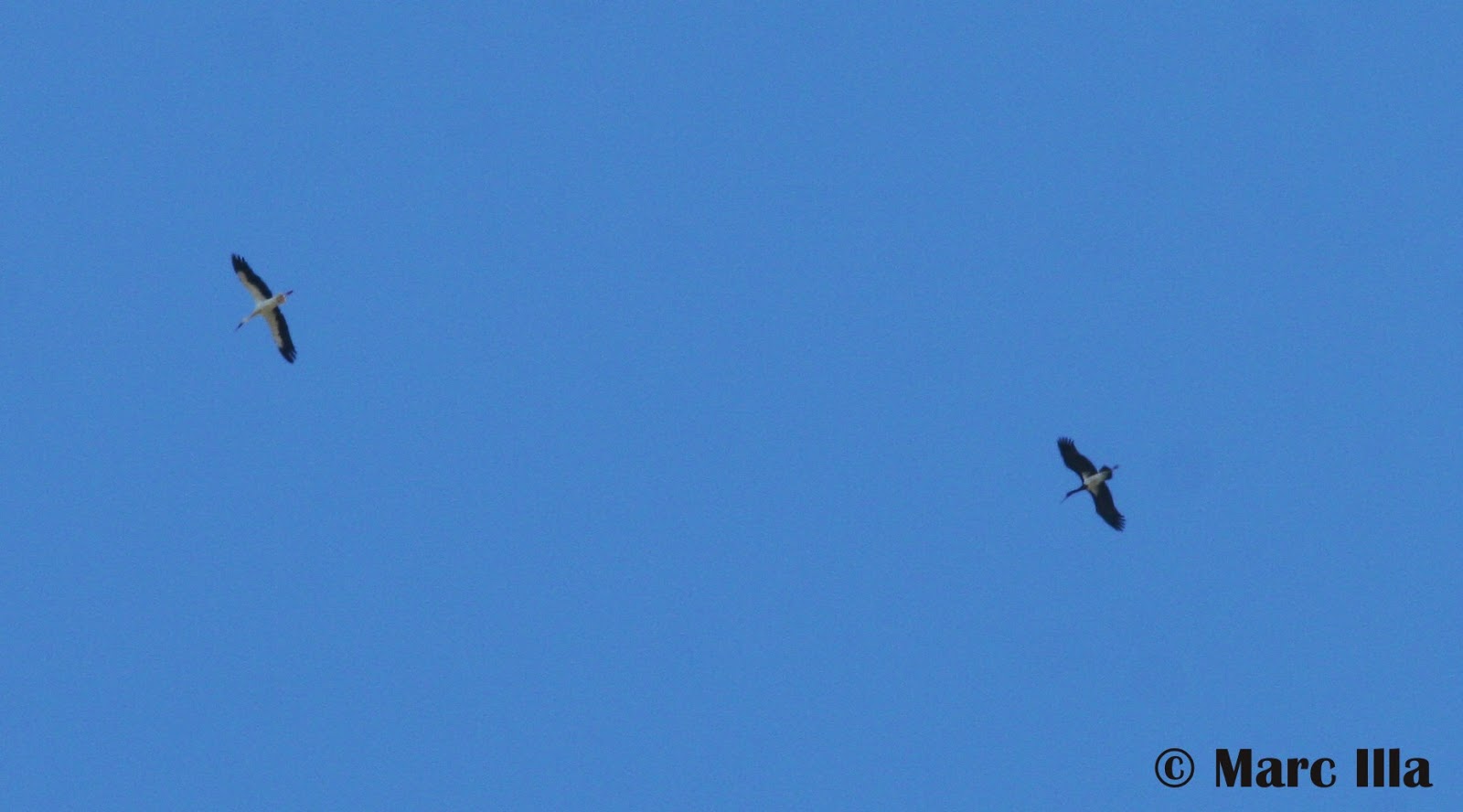 During the rest of the morning I cannot stop looking the sky at any time, while I was ringing some Blackcaps (Sylvia atricapilla) and Chiffchaffs (Phylloscopus collybita). The day finished with my first Willow Warbler (Phylloscopus trochilus) for the year, really nice to see a long primary projection finally! ;) 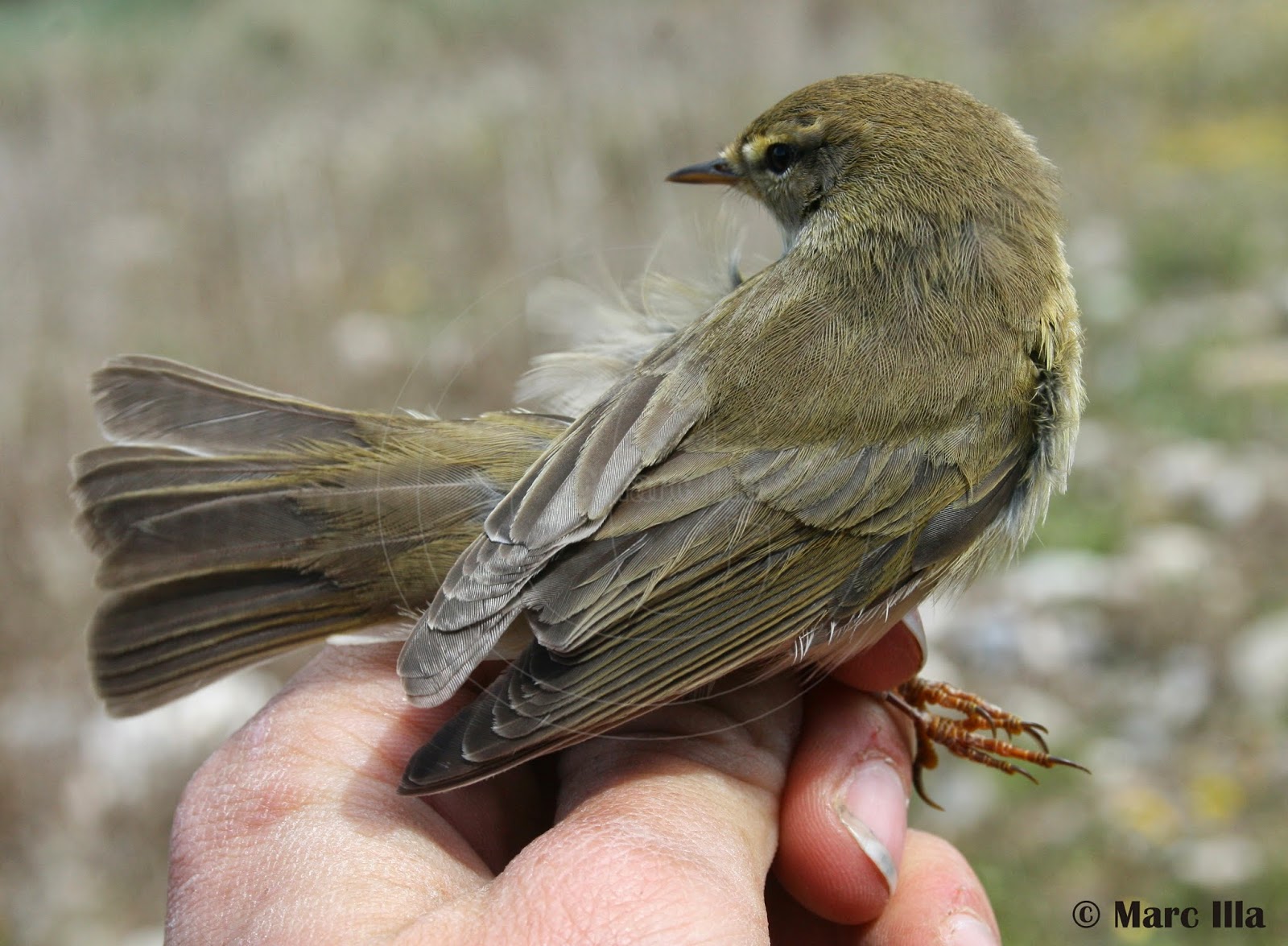