Siskins in a feeder

I sometimes think about the great help that, almost always, bird feeders give to many species. Some months ago I met Jaume Tarín, who has a very nice feeder in his 'countryside' home. 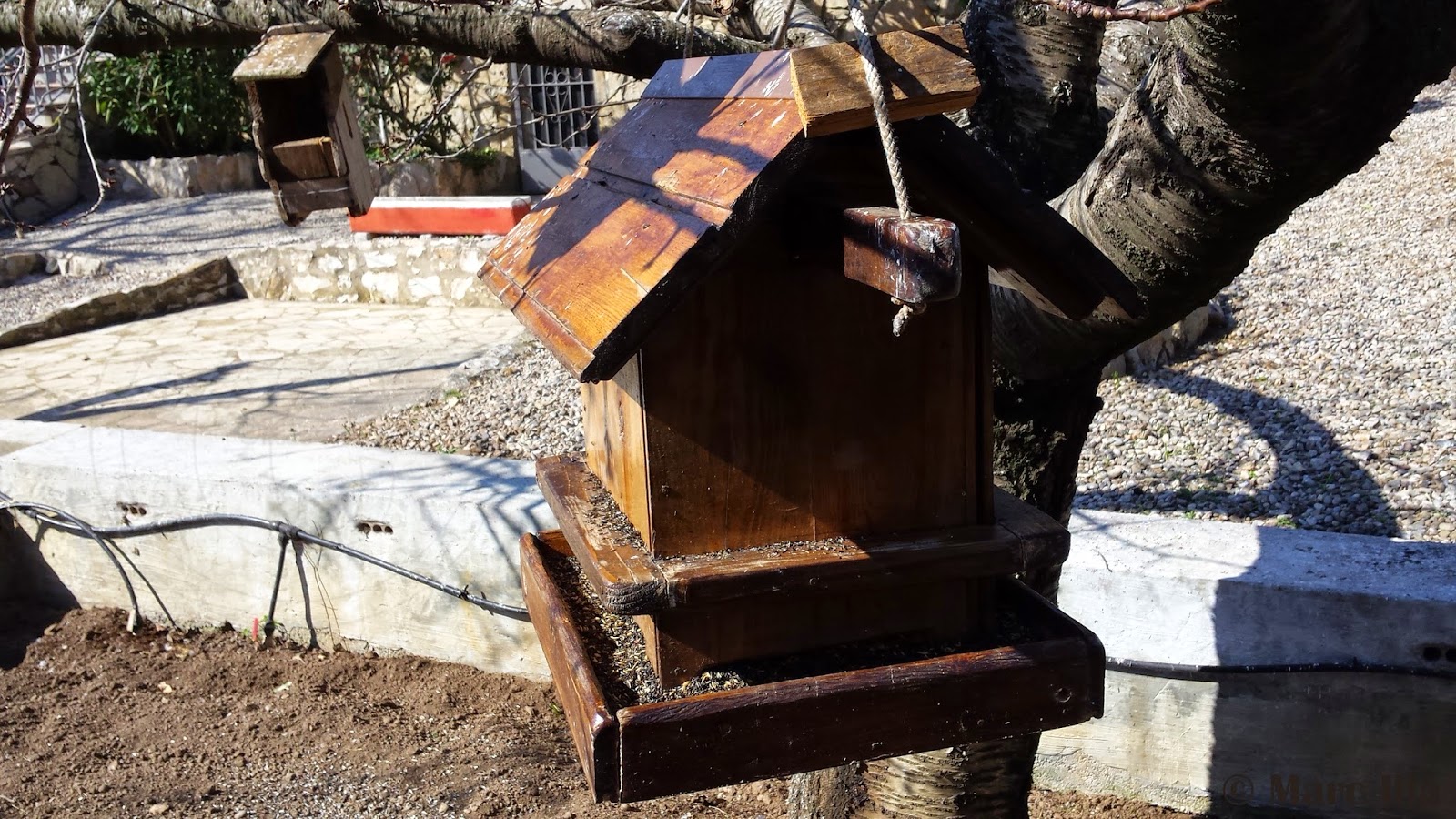 The star species of the feeder is, without any doubt, the Siskin (Spinus spinus). Jaume has been taking care of them (of the feeder) for many years, and also he has been taking very interesting data from them. We decided to start to ring in his place, and the results have been so promising. 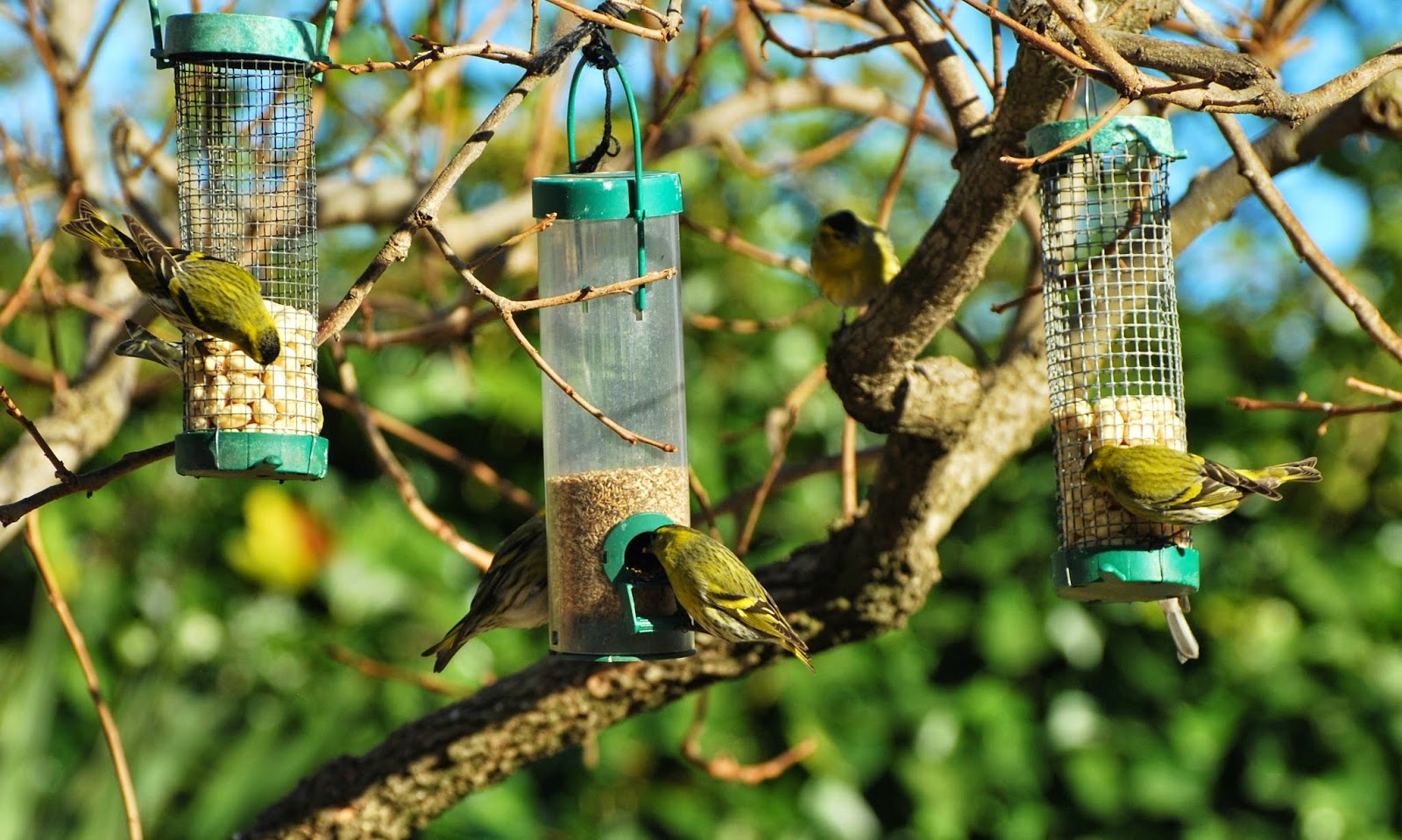 First of all, a quick overview of the species in Catalonia. 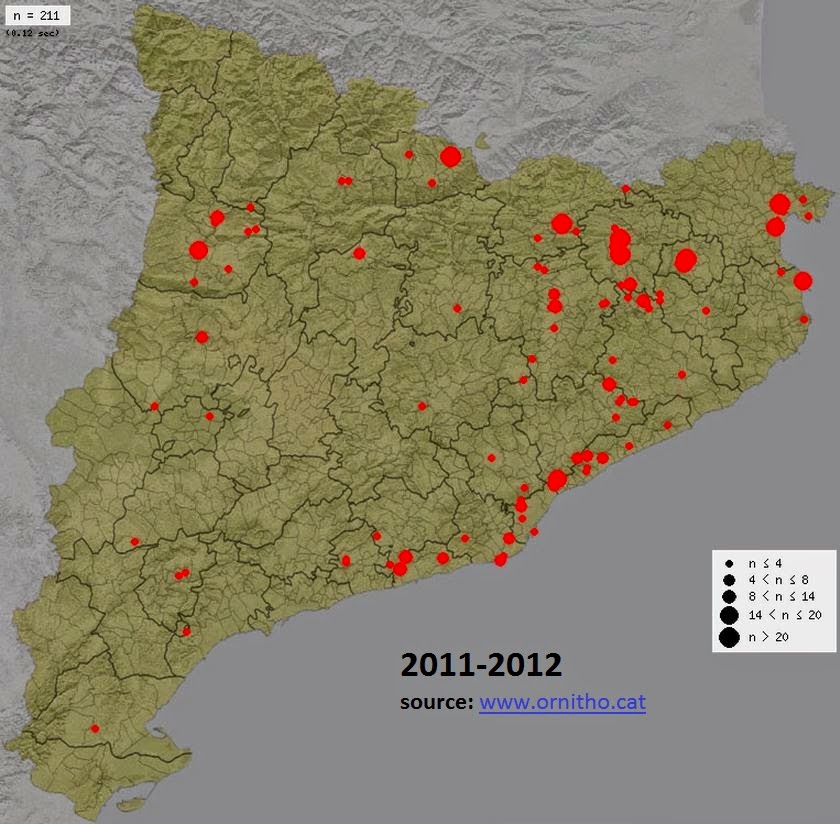 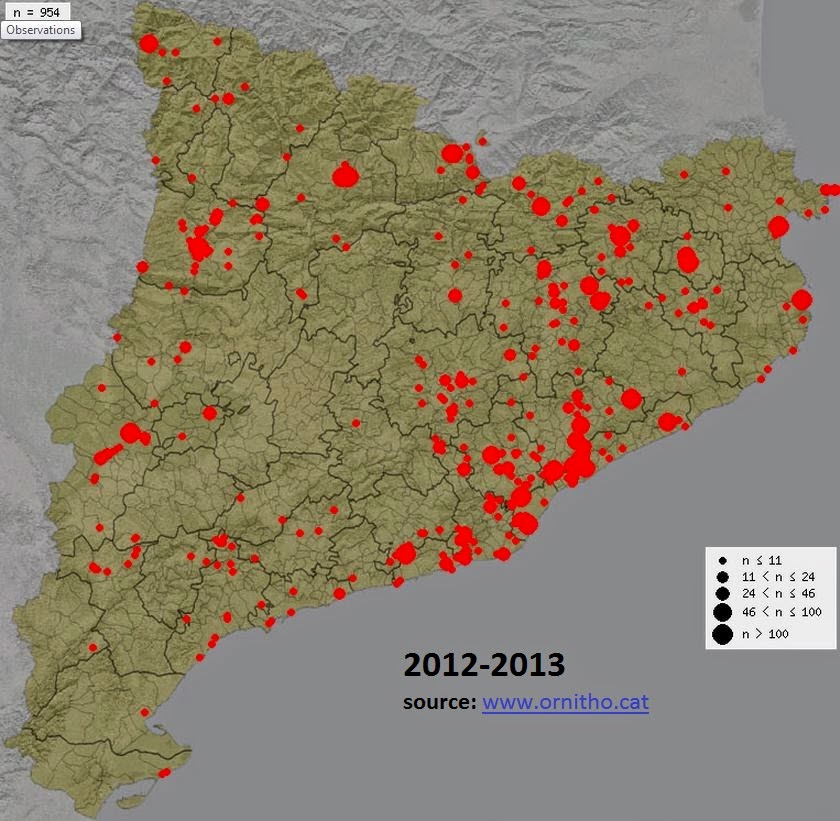 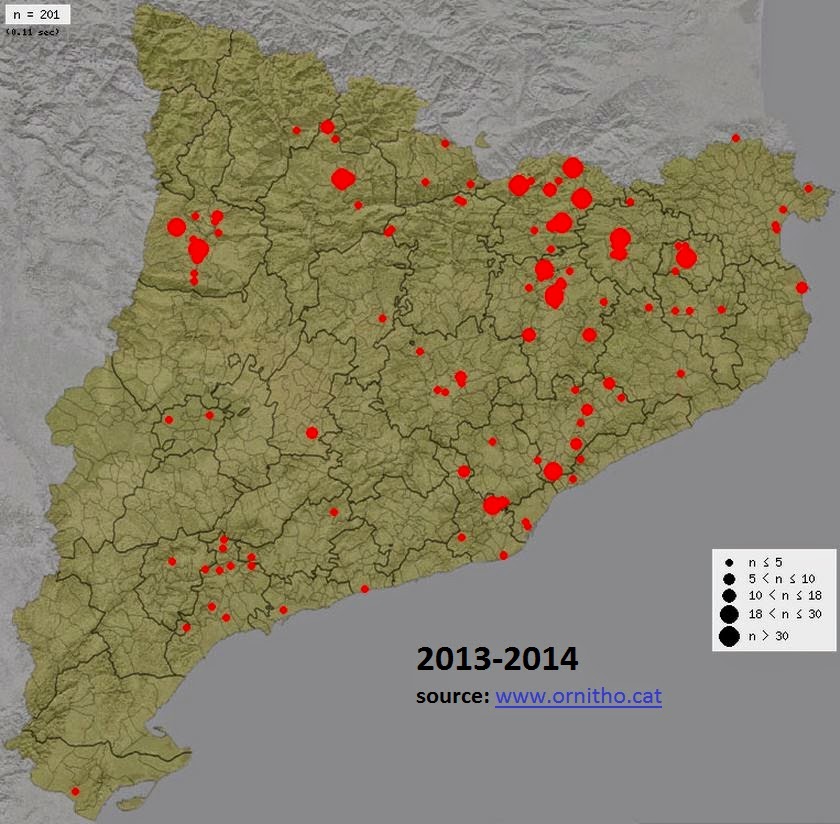 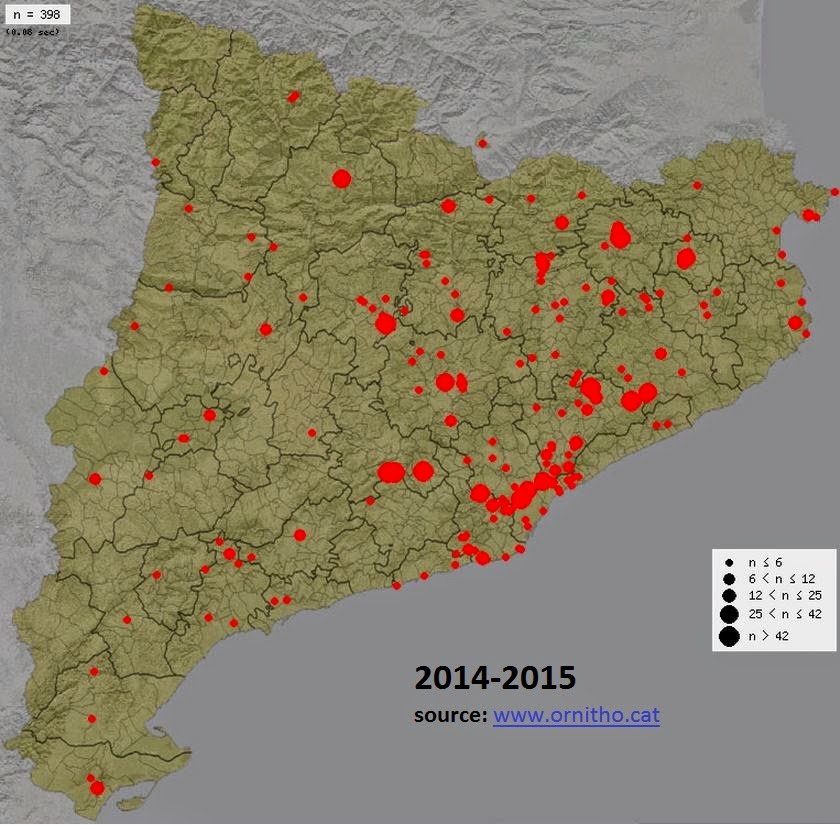 As you can notice in the graphs, Siskins are basically winter species in Catalonia. There's a small breeding population on the Pyrenees and Pre-pyrenees mountains, but the main part of the birs we see during the year are winterers or migrants. As is been pointed by many authors, with data basically from ringing recoveries, Siskins can change, a lot, the wintering places, but some of them keep some fidelity. It would be very interesting to see how many of the amount we've ringed are back next year, and if anyone is trapped in any other place.

The thing is, will be the next year good for Siskins? We actually don't know, and I think it's quite unpredictable. Just to point what I experienced two years ago, in 2013's autumn: it was almost a record season for Siskins in Falsterbo, with 2560 birds ringed (4rth best year ever) and 97197 birds counted in active migration (2nd best ever). I expected nice numbers overwintering in Catalonia, but it turned to be one of the worst winters in last years. Seemingly, food abundance is one of the main factors that push them, or not, to migrate, among as surely more factors.

During this winter, which I would label as 'normal' in terms of numbers of birds, Jaume has detected the biggest numbers ever in his garden. I've pretty sure the great work (keeping always some food on there) has had something to do with it. 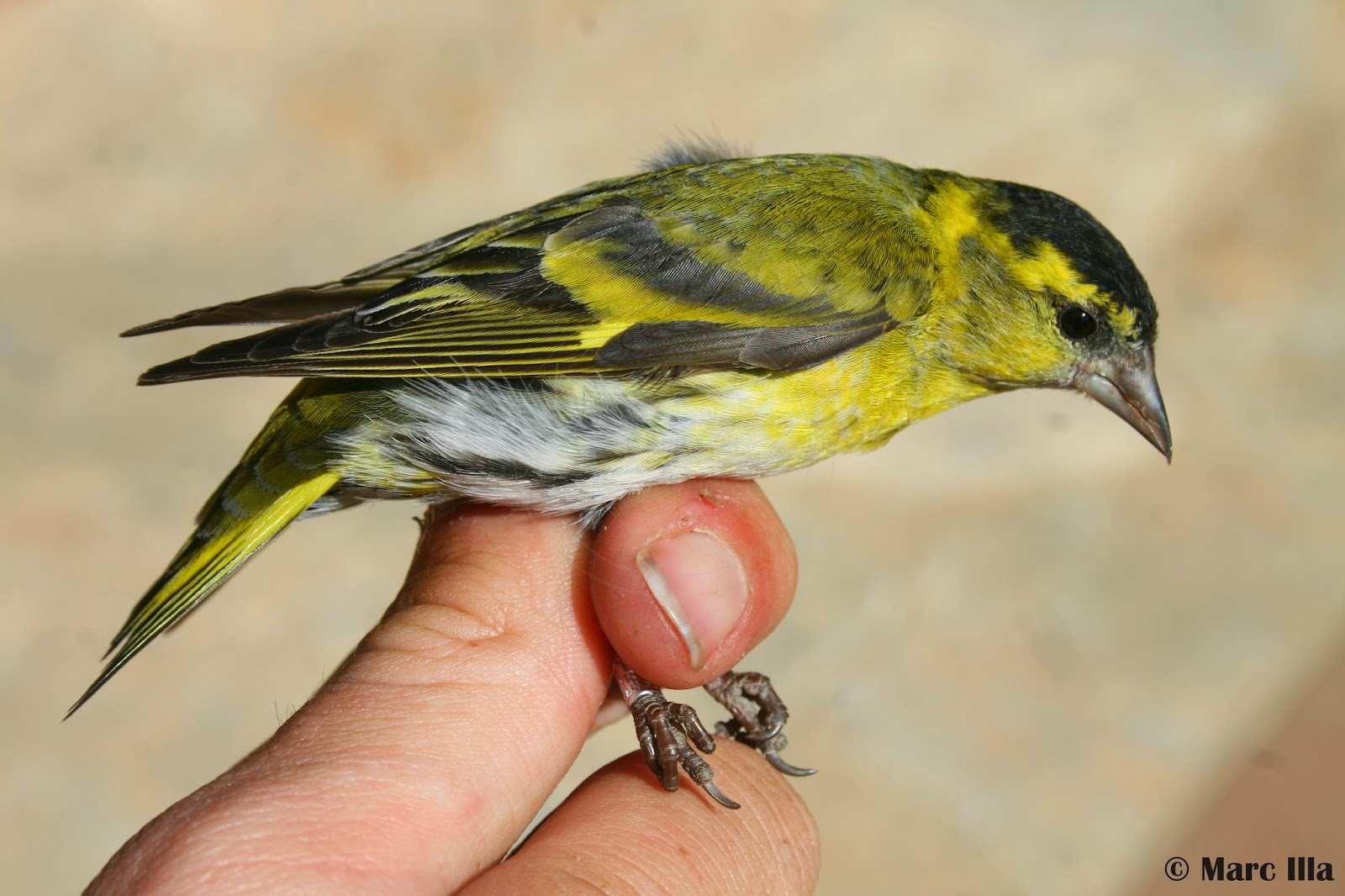 Together with Lídia, Òscar and Marta, we did 3 ringing sessions, with more than 200 Siskins ringed. I think they're very promising numbers, and we'll be continuing the project in the next winters for sure!

Ageing can be quite straighforward, because in many first-winters (EURING 3 / 5) there's a quite obvious moult limit in the greater coverts.
But as other Fringillidae species, some individuals can undergo very extensive postjuvenile moults. Jenni & Winkler (1994) quote about 87% of birds with an 'easy recognisable moult limit in greater coverts'. Some of these 13% have all GCs moulted, and usually tertials, and inner secondaries. many birds has been found too with excentrical primary moult and some other stuff, but for the moment I haven't found any.
Sexing is even easier. And as males are brighter, they usually have more distinghishable moult limits. 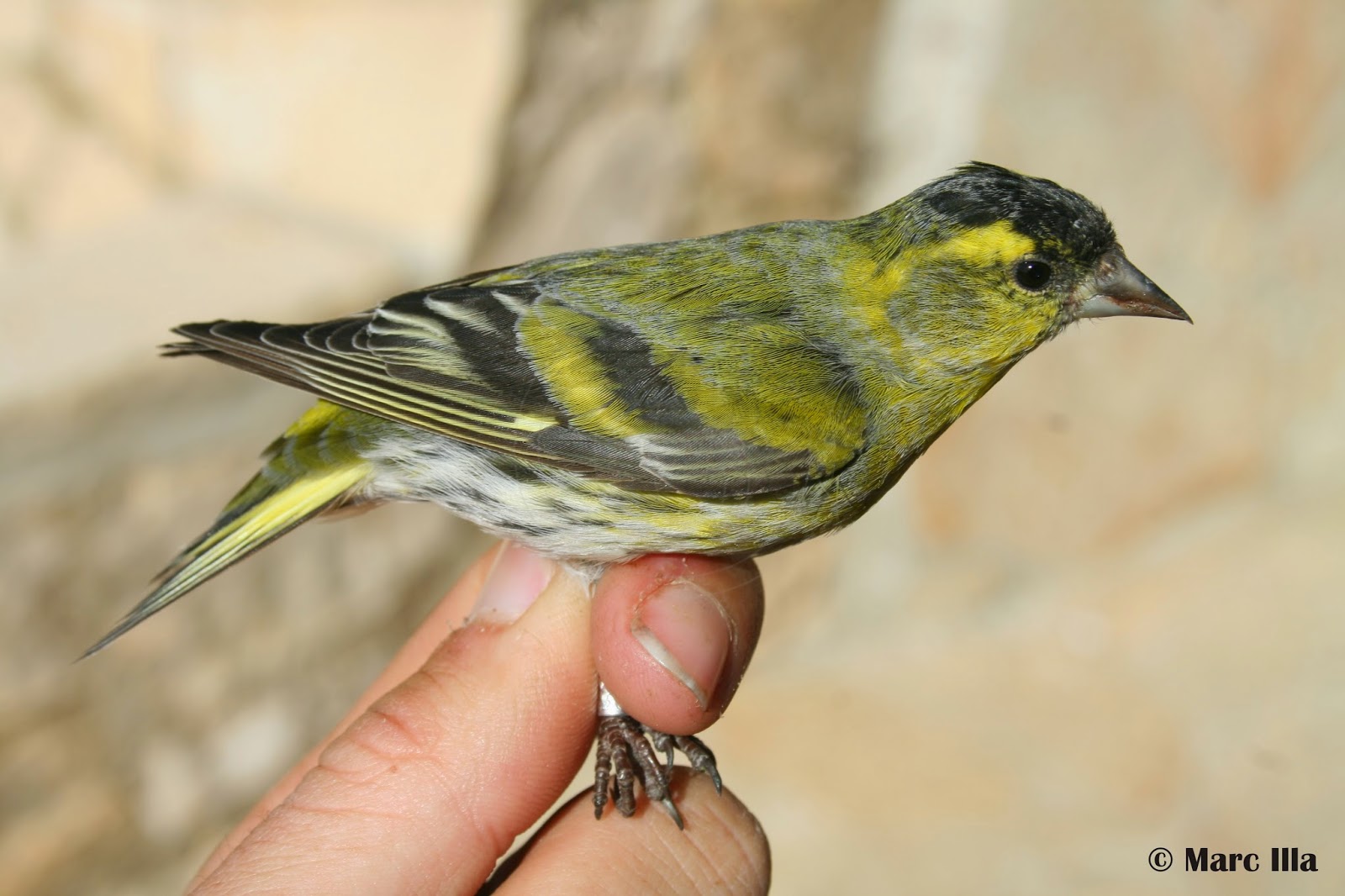 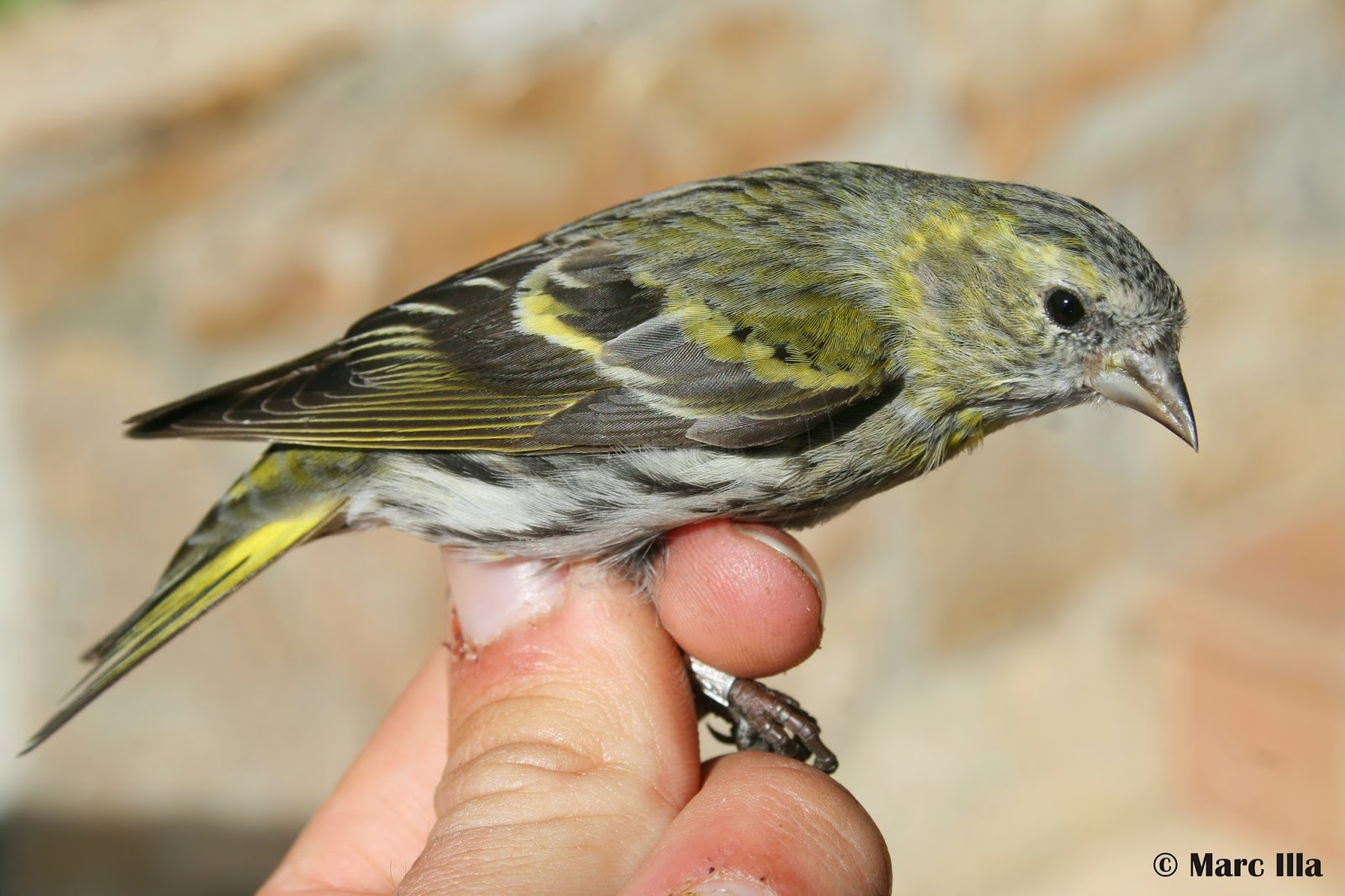