I am still without that time that I would spend writing some posts, so I am forced to write this review of the hole month of December, today is already 30th!

During the first weekend of December, and "keeping the tradition", already for 5 years, we went to the Ebre Delta. This year, probably because of the very soft temperatures and the lack of rain for many, many days, we had a curious mix of species. Indeed, we saw wintering Purple Heron (Ardea purpurea) and some Yellow Wagtails (Motacilla flava), and despite we had no wind and the sea was perfect to do some seawatching (and spot the traditional flock of Scoters), we weren't able to see any.

As actual wintering interesting stuff, we saw 2 Black-throated Divers (Gavia arctica), 1 Brambling (Fringilla montifringilla), 1 Bittern (Botaurus stellaris), 1 Hen Harrier (Circus cyaneus), a minimum of 34 Jack Snipes (Lymnocryptes minimus) (which is a lot!), and the Pacific Golden Plover (Pluvialis fulva) that has been around for the last three years. But as I was saying, no Melanittas at all, and along the Trabucador sandbar, we only got to see 4 Red-breasted Mergansers (Mergus serrator). As I said I previous posts, this autumn-winter feels weird, vquite good for some species but inexplicably bad for others...

This year we also spent quite a lot of time reading PVC rings, especially from Flamingo (Phoenicopterus roseus) and Glossy Ibis (Plegadis falcinellus). 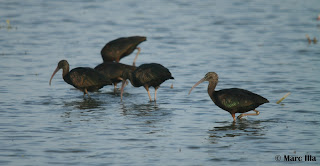 We had the very nice visit of Timmy and his Maltese friends, that were on a Spanish-Catalan trip for a few days. It was very nice to see and do some birding with them!!

The Ebre Delta is a very special place. Sunset + flamingo flock is usual scene there, and always very nice and special. 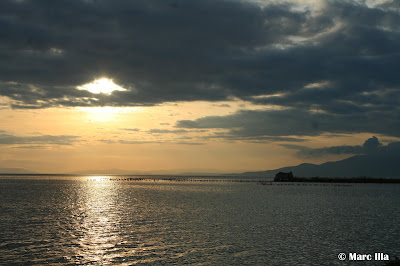 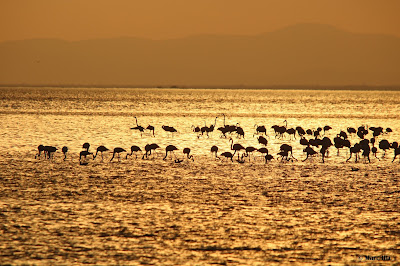 
The weeks after I was quite busy, and the few free mornings I had I went out ringing around my usual places. It's already 4 years since I started the constant effort ringing station at La Corbatera, where I ring 7 times in summer and 3 in winter (one in December, one in January and the last in February). In this year's December seassion I got a lot of nice old retraps. Already in October I realised it was a good year for Blue Tits (Cyanistes caeruleus), and as I was expecting, I trapped some in the constant effort station. Seemingly they like a lot that area! The case is that among the Blue Tits I got, most of them were retraps, with individuals from a lot of different sessions, both in summer and winter. Two were more special than the others: one ringed as adult on 28/12/2012 (first ringing there), and a French retrap!! 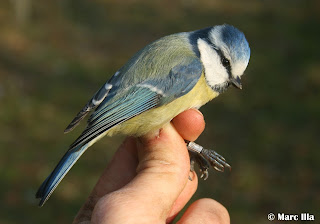 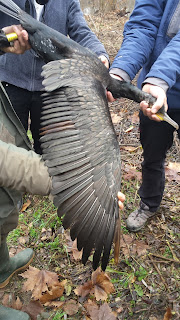 Back to passerines, I started ringing in a new place with small fields surrounded by Mediterranean Hackberries (Celtis australis), one of the favourite trees for many thruses and Hawfinches (Coccothraustes coccothraustes) here during winter. Indeed, we mainly trapped thrushes: Song Thrush (Turdus philomelos), Mistle Thrush (Turdus viscivorus) and Blackbird (Turdus merula), and two very nice Hawfinches as well!! 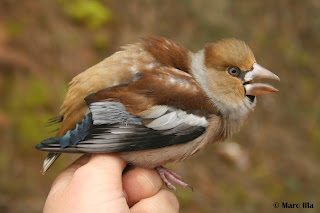 For the ones with ID difficulties between Mistle and Song Thrushes, three pictures of both species together, hope it helps! viscivorus to the left and the one in the bottom in the belly picture, philomelos to the right. 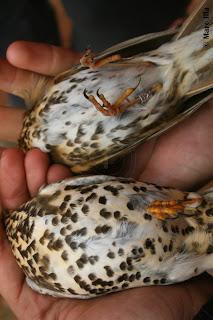 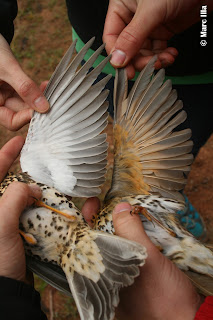 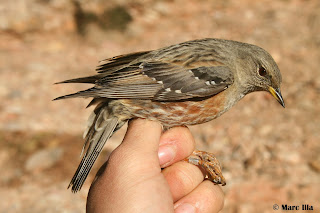 To end with good purposes, the start of a new project: colour-ringing Rock Sparrows (Petronia petronia). On the drylands around my village it is usual to find flocks oh hundreds of Rock Sparrows, that is meant to be a regular but not very anundant breeder in the area. Many questions related to local movements are in my mind, and that's why I have decided to start ringing them with colour depending on the location. Let's see if it works! 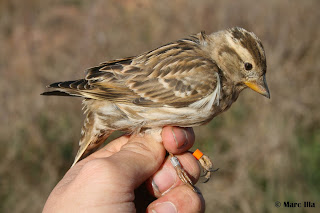