This weekend I stayed in Boumort, a National Hunting Reserve in the Pre-pyrenees. It's a great place to see a lot of biodiversity because there are a lot of different habitats in a little space. You can start seeing some Mediterranean animals in the middle of a big oak wook and, half an hour later, you can walk around a Mountain Pine's forest (Pinus uncinata).

I went in Boumort with David Solans, a great photographer. We arrived there on Thursday night. Just before arrive to Refugi Cuberes, the place where I slept and ate, we saw a Badger (Meles meles), a Red Fox (Vulpes vulpes), a Beech Marten (Martes foina) and a big Red Deer (Cervus elaphus) male, all in the middle of the track.

The Red Deer's bellows starts, genereally, in half September and last to half October. Then, this weekend was in the end of the heat period, so we didn't hear lots of Deers.

Autumn weather in the Pyrenees means lots of rain and cold... but also lots of mushrooms and alpine birds that move into low altitudes. 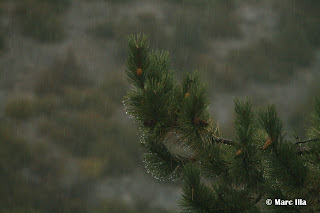 Refugi Cuberes is situated in a valley (see the photo bellow). You only can arrive there after an hour by track. 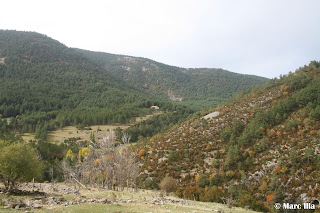 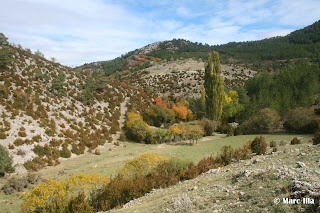 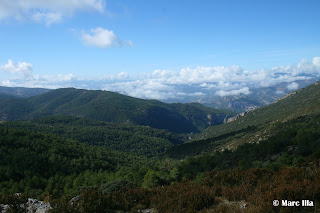 Friday was a terribly autumn day, All day raining... Only at midday I could see some birds from the Refuge. I saw 2 Sparrowhawks (Accipiter nisus), a Red Kite (Milvus milvus) and a Eurasian Hobby (Falco subbuteo) migrating, and 2 Bearded Vultures (Gypaetus barbatus), 2 Black Vultures (Aegypius monachus) and a Golden Eagle (Aquila chrysaetos). Not bad!
At the evening I was 'chasing' a Deer that was bellowing near the Refuge. I could see it just after the sun went down... but it was an enormous male!

On saturday morning, I went to see some Vultures. From Refugi Cuberes, I saw a fantastic Red Deer male. I could take a photo 'phonescoping'...!

I found a good place to see the Vultures soaring up. I saw 2 Bearded Vultures (Gypaetus barbatus), a Golden Eagle (Aquila chrysaetos), a migrating Short-toed Snake-eagle (Circaetus gallicus) and a Red Kite (Milvus milvus), both migrating.

On the afternoon, I went to the Mountain Pine forest. It's a place that I really love. During all the route that I did, I saw a Ring Ouzel (Turdus torquatus), some Citril Finches (Serinus citrinella) lots of Tits (specially Long-tailed, Coal and Crested), lots of Goldcrests (Regulus regulus) and some migrating birds, like Skylarks (Alauda arvensis), Common Linnets (Carduelis cannabina), Meadow Pipits (Anthus pratensis), Grey Wagtails (Motacilla cinerea), Mistle Thrushes (Turdus viscivorus), some Barn Swallows (Hirundo rustica) and a Northern Wheatear (Oenanthe oenanthe). 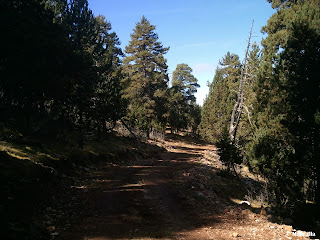 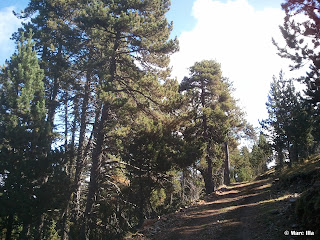 Later, I prepared my hide for photograph some Deers. I didn't be lucky enough... I did'nt see any deer. Although, I saw a 1cy Eurasian Hobby (Falco subbuteo) and a dark form of Eleonora's falcon (Falco eleonorae) migrating and 2 Bearded Vultures (Gypaetus barbatus).

Sunday was the 'migration day'. During the morning, I counted lots of migrating birds while I was sitting in a grassland. In 2 hours, I saw: 8 Barn Swallows, 33 Meadow Pipits, 9 Grey Wagtails, 29 White Wagtails, 7 Song Thrushes, 15 Mistle Thrushes, minimum 480 Chaffinches, 1 Brambling, 2 Serins, 4 Goldfinches, 36 Eurasian Siskins and 20 Linnets.
The weekend passed very quickly. Just before the lunchtime, I visited Cuberes, a little village that was inhabited during the Spanish Civil War. The houses are in very bad conditions, but I went inside. All walls are full of inscriptions... 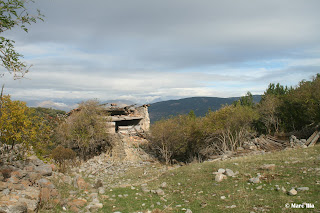 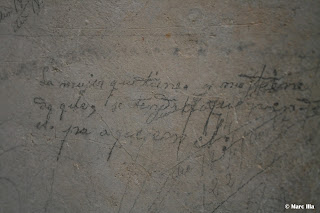 Later, when I left the biggest house, I saw some Common Crosbills (Loxia curvirostra). 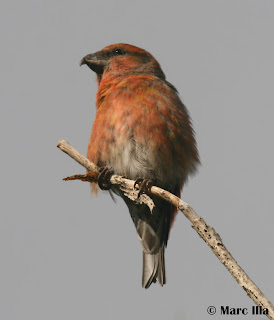 I will come back again... very soon. 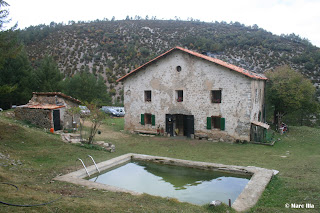