A week ago I arrived in Falsterbo, SW Sweden, where I joined Stephen and Marcel in the autumn migration campaign. Here, I met Caroline, Albin and the 'Southwest Gangsters' (Emil, Ulrik and Oscar), and a some other great birders like Björn Malmhagen and Måns Karlsson. 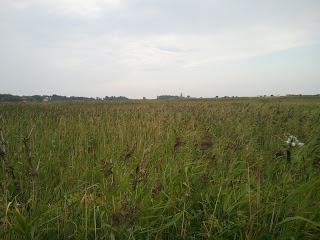 Flommen is an extensive reedbed with Cladium mariscus, the typical habitat where Reed Buntings (Emberiza schoeniclus) breeds. We basically catch Reed Warblers (Acrocephalus scirpaceus) and Segde Warblers (A.schoenobaenus), but there also quite common Marsh Warblers (Acrocephalus palustris), Barn Swallows (Hirundo rustica) and Willow Warblers (Phylloscopus trochilus).
During my first ringing morning in Flommen, we caught this beautiful juvenile Rosefinch (Carpodacus erythrinus), that was a lifer for me! 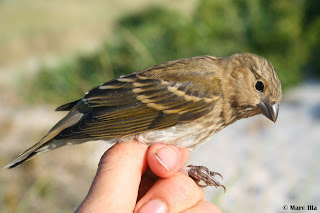 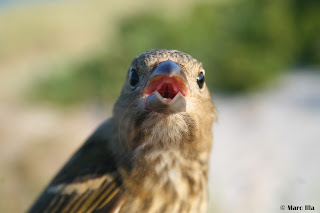 The day before, my second morning in Flommen, we caught this 1st-year Lesser Whitethroat (Sylvia curruca) in the same net. Also a lifer for me... 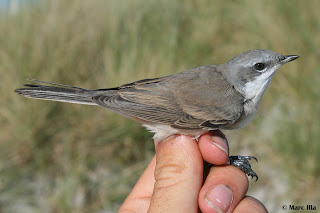 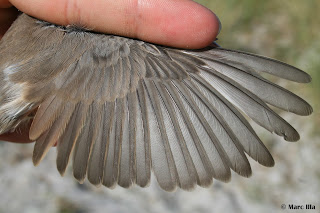 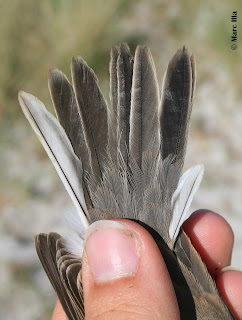 In spite of this interesting birds, last days we are trapping only a few birds (between 10 and 30 each day). The migration has already started, with some Tree Pipits (Anthus trivialis), Yellow Wagtails (Motacilla flava), Crossbills (Loxia curvirostra) and Barnacle Geese (Branta leucopsis) flying over, but for the moment the migration is quite slow. For example, we only have caught two Whinchats (Saxicola rubetra).

On the other hand, it seems to be an invasion of Two-barred Crossbills (Loxia leucoptera) in Europe, that has produced some sightings in Germany, Denmark, Sweden... Here in Falsterbo, usually with Common Crossbills flocks, we have detected many of them.
Talking about Crosbills, this interesting bird was caught in the lighthouse garden. 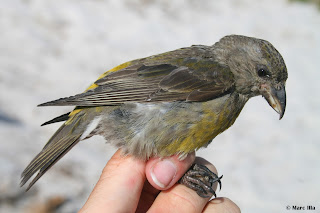 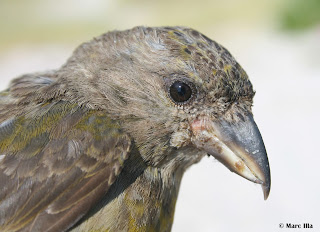 In the afternoons, I have been in different places around the Falsterbo peninsula, in order to know the best sites and can go there often. Some gardens and parks are already a good place to find something interesting for me. For example, is easy to see some Wood Warblers (Phylloscopus sibilatrix) and Icterine Warblers (Hippolais icterina) wherever, and also some interesting subspecies like the White-headed Long-tailed Tit (Aegithalos caudatus caudatus). 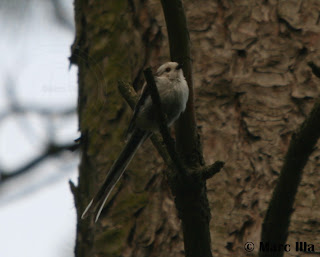 I was not surprised when we heard and then we saw this Crested Tit (Lophophanes cristatus), but the gangsters were very happy because it's a rare bird in the Falsterbo peninsula. 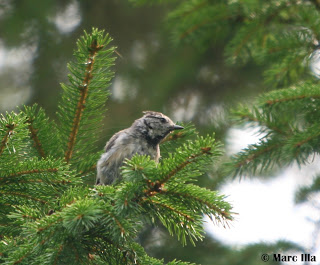 Two days ago we went to 'the Heath', the best place in Sweden to see raptor migration. Despite we didn't see a lot of birds, an adult White-tailed Eagle (Haliaeetus albicilla) was very good for me. We saw a Honey Buzzard (Pernis apivorus), some Red Kites (Milvus milvus), Common Buzzards (Buteo buteo), 17 White Storks (Ciconia ciconia), 2 Ospreys (Pandion haliaetus)... and lots of Sparrowhawks (Accipiter nisus), probably the commonest migrating raptor. 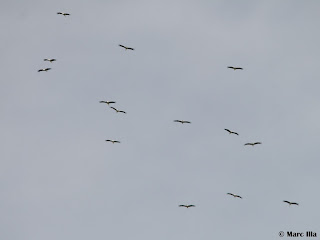 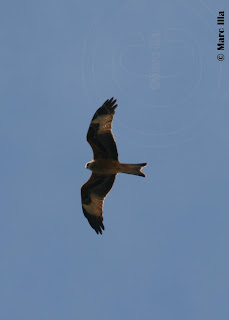 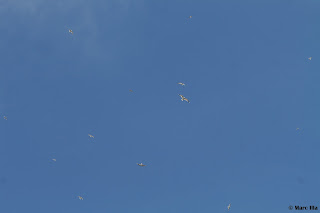 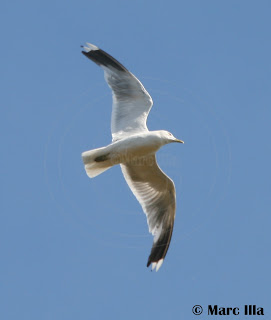 During some nights we did some Tern and Wader ringing, but all this stuff deserves another post.
If you want to see daily Ringing Totals, just go to the Falsterbo Bird Observatory webpage, and click 'Ringing'.
Posted by Marc Illa at 9:58 AM