During last days, the wind has stopped a bit, enough to cause an authentic rain of birds that across the Falsterbo peninsula, migrating south. Scandinavia is a really good place for lots of bird species to breed, but in winter they can't resist the extreme low temperatures. Then, after a short breeding season, a high percentage of scandinavian birds have to fly south, looking for better places where resist the hard winter. Lots of species that are quite sedentary or short-migrant birds in Catalonia are authentic migrants here, like White Wagtails (Motacilla alba), Chaffinches (Fringilla coelebs), Great Tits (Parus major)...
Falsterbo is located in one of that sites that birds really use to migrate. During all day, thousands of Tree Pipits (Anthus trivialis) and Yellow Wagtails (Motacilla flava) are passing by and calling. Lots of other species are also migrating in good numbers, and we are catching some of them.
This Reed Bunting (Emberiza schoeniclus) is not one of this migrants (for the moment), but is also really good to see in its fresh juvenile plumage. 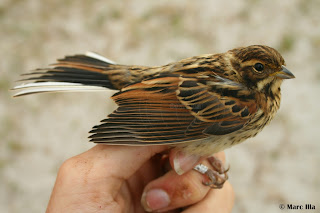 Another thing that we didn't have in the south are bird 'invasions'. Last year there was a Blue Tit invasion in autumn (look at this video, taken by Björn Malmhagen. It's completely crazy!). During this month, as I said in another post, we have a Common Crossbill invasion that is bringing some Two-barred Crossbills too.
Yesterday, the migration counters in Nabben detected 6580 Crossbills migrating, and 51 Two-barred!! Also, more than 10300 Tree Pipits and 3030 Yellow Wagtails...

Stephen prepared a mix of calls that we're playing with a speaker in order to catch some Crossbills. 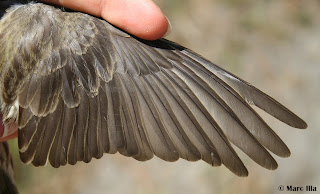 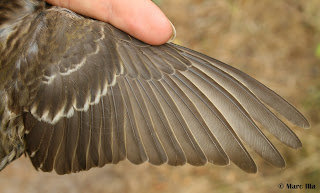 We would never expect to catch two Two-barred Crossbills (Loxia leucoptera) just when we had released the 'fake two-barred'...! 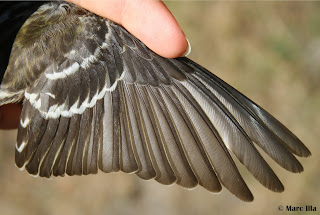 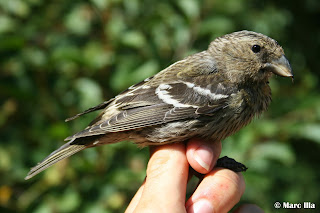 Let's see if we can manage to catch more Crossbills in the following days...

Last wader ringing nights have also been very productive, with some interesting species. Today we have catched this Green Sandpiper (Tringa ochropus) during the standardized ringing in Flommen! 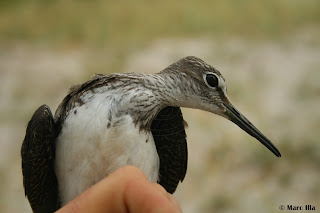 But this Oystercatcher (Haematopus ostralegus) from the last ringing night is really better!! 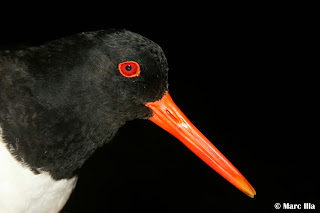