2014 starts with really nice days. 1st January was full of family events but on 2nd I could ring for first time this year, in my usual place. We had a really pleasand morning, with only 14 birds, but some of them really nice. Actually, last ringing days in December I mainly retrapped some usual birds and I was waiting for a small entrance of some new winter visitors. And they came during 1st January! Some 'new' Song Thrushes (Turdus philomelos), Robins (Erithacus rubecula), Black Redstarts (Phoenicurus ochruros) and this kind of stuff appeared, and I ringed some of them. 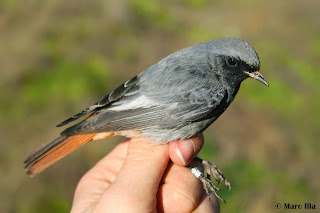 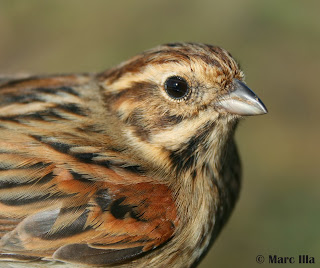 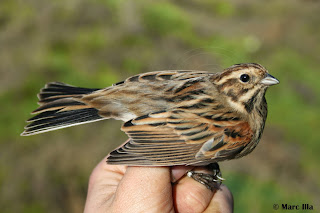 Also, a big (I'm talking just about 30...) Meadow Pipit's (Anthus pratensis) flock appeared. And I trapped one bird!! (3 others were perched in the net and 2 escaped from 'inside'... but I'm still happy with just 1 Anthus trapped!): 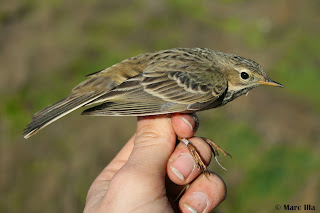 On the 3rd day, we went to Llobregat Delta. It was a really nice morning, we saw all the typical wintering stuff and also a Common Scoter (Melanitta nigra) and a Red-throated Diver (Gavia stellata) on the beach. Later, in Cal Tet lagoon, I checked carefully the reeds, looking for two Bitterns (Botaurus stellaris) that had been seen lately. Finally, one of them flew briefly, but I could see it preety well! Nice birds to start the year!! 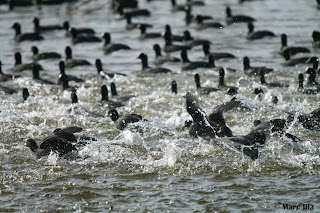 4th January was a cloudy day, but produced a really nice sighting. The Goosander (Mergus merganser) that had been seen in my area, inland Catalonia, during the end of 2013 reapeared. The bird has only been seen that day this year, between six and half past six in the afternoon. The following day in the morning, it has already dissapeared! 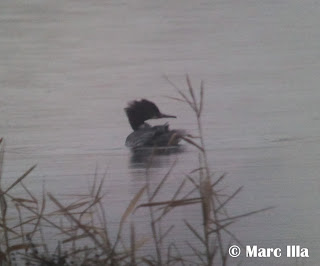 During these days, before exams, I also managed to ring in some roostings. Last year I started a project with a Yellowhammer's roosting, and this winter I continue with it. Bernat and me did a ringing session some days ago, and we trapped 6 new birds.

Also, I've been ringing some Reed Buntings (Emberiza schoeniclus) in other roostings. By this time in the winter, some males start to show a lot of black... 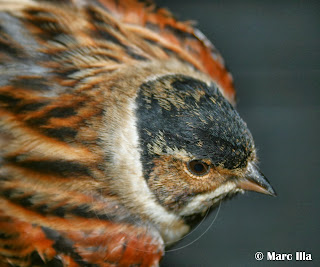 As a consequence, plumage differences in 1w birds, with the abrasion, get more obvious, but some birds can be still a bit tricky. At least, this has an obvious moult limit between tertials and secondaries. 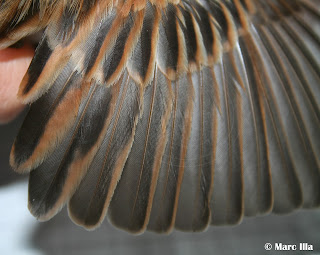 I've already trapped more than 60 schoeniclus this winter in my area, and I trapped a bird with a Spanish ring on December. The greatest surprise was yesterday, when I trapped a Swedish Reed Bunting! 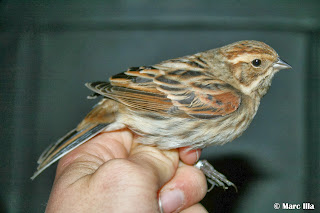 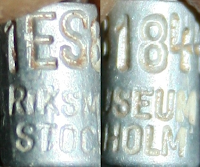 Last year I recovered another schoeniclus during the winter, a bird from Poland. Let's see when it's found one of the birds that I've ringed!
Posted by Marc Illa at 1:21 PM