As November is passing, many nice 'winter species' are appearing. This year was inicially good for Siskins (Spinus spinus) and Hawfinches (Coccothraustes coccothraustes), at least in my usual areas. I've also seen some Redwings (Turdus iliacus) in migration, but for the moment, not so many Bramblings (Fringilla montifringilla) neither Fieldfares (Turdus pilaris). Also, many Wallcreepers (Tichodroma muraria) have been seen in low but typical areas.

This season in Falsterbo has been extremely good for Goldcrests (Regulus regulus), but for the moment they're not reaching Catalonia. Nontheless, we trapped one some days ago close to my area, where they're supposed to be scarce migrants. 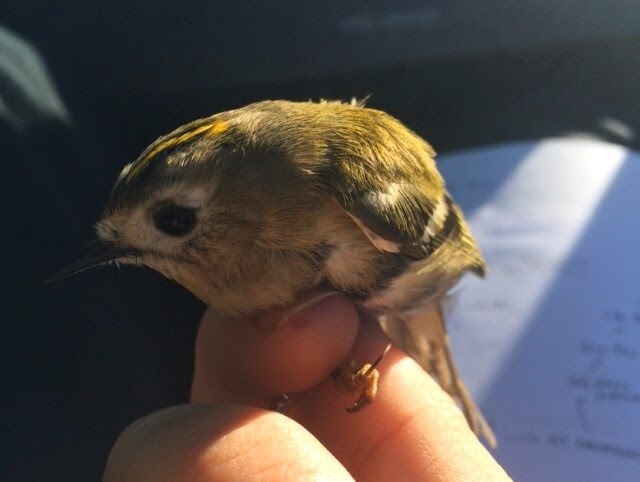 Althouh I'm full of work to do during these days, I've managed to do some birding/ringing when I had a litlle bit of time.
It was really interesting the ringing morning we had in Pinedes d'Armengol, inland Catalonia. Jaume Tarín, who has been taking care of a really nice feeder on his house, explained me he has been studying 'his' Siskins for many years. We decided to go and ring some, and with one net and a half (some shelves were completely useless), we trapped 65 birds!! We'll try to keep on ringing them during this winter. 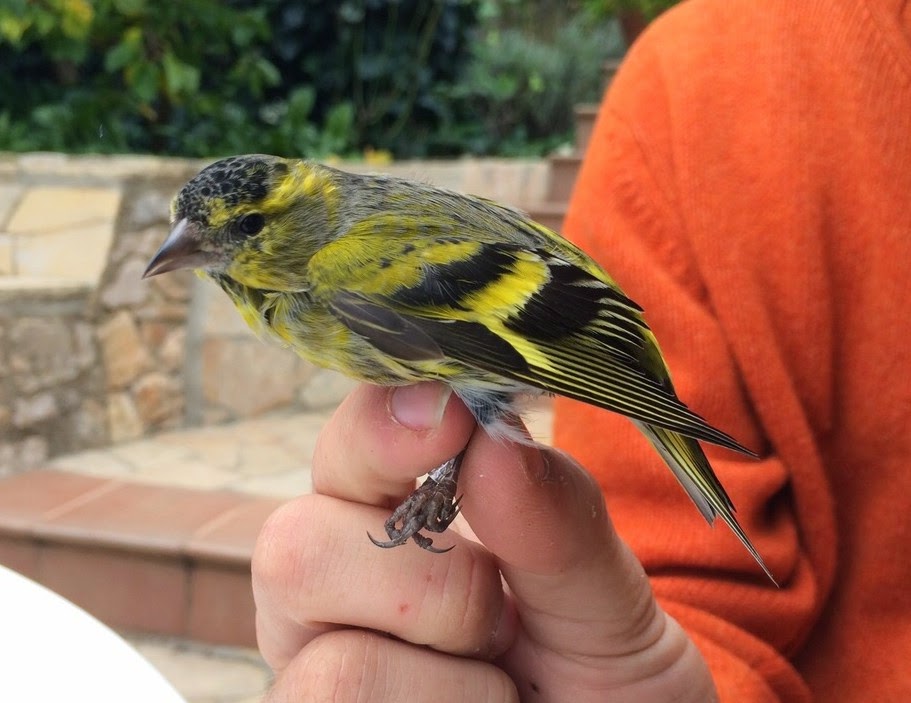 The best thing came last weekend, that I spend with some friends. The plan was really nice, go away to a house lost in the middle of the forest, without cell phone, with really nice food, great company and... some relax ringing. Well, yeah, for me is always relaxing, but tha plan was to set up just a few nets, catch some extremely usual birds and just enjoy them, Actually, last year we did the same, and we trapped this nice Jay (Garrulus glandarius). So, I was kind of feeling something good in the nets. 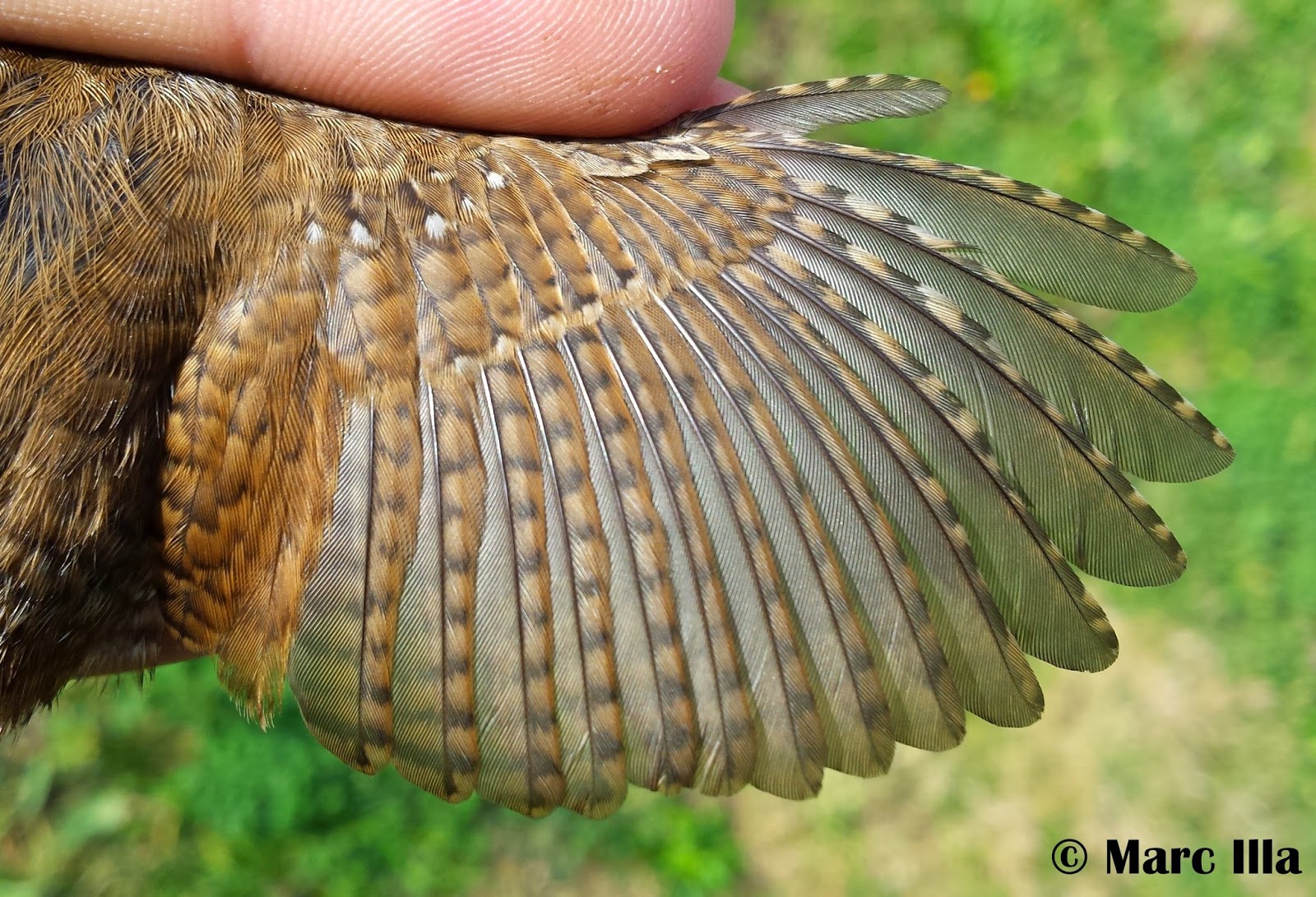 When we trapped the first Firecrest (Regulus ignicapilla) I was very happy. It's quite common here, but I'm not very used to ring one. It was something like the bird 60 of the morning, so the thing was going perfect. 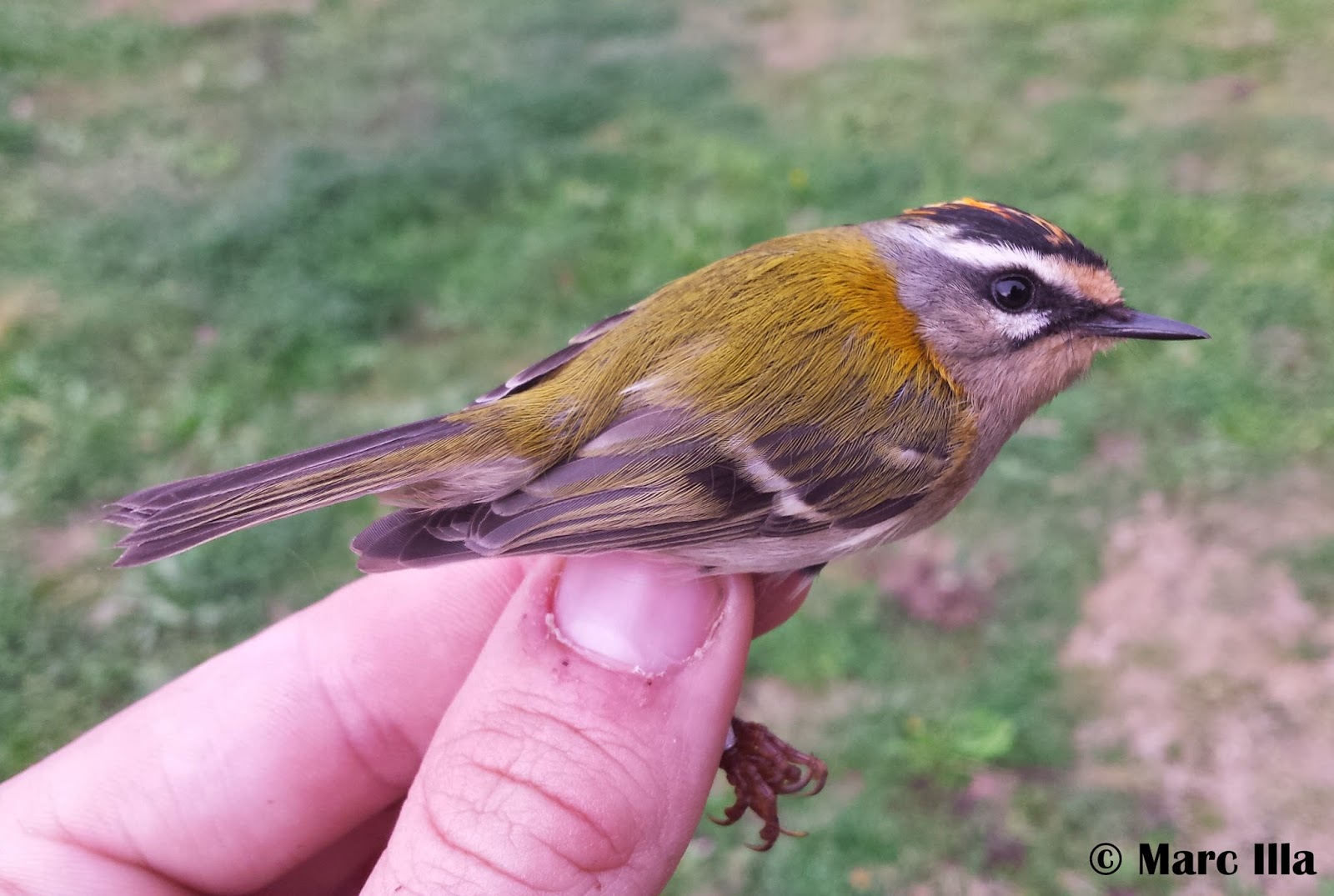 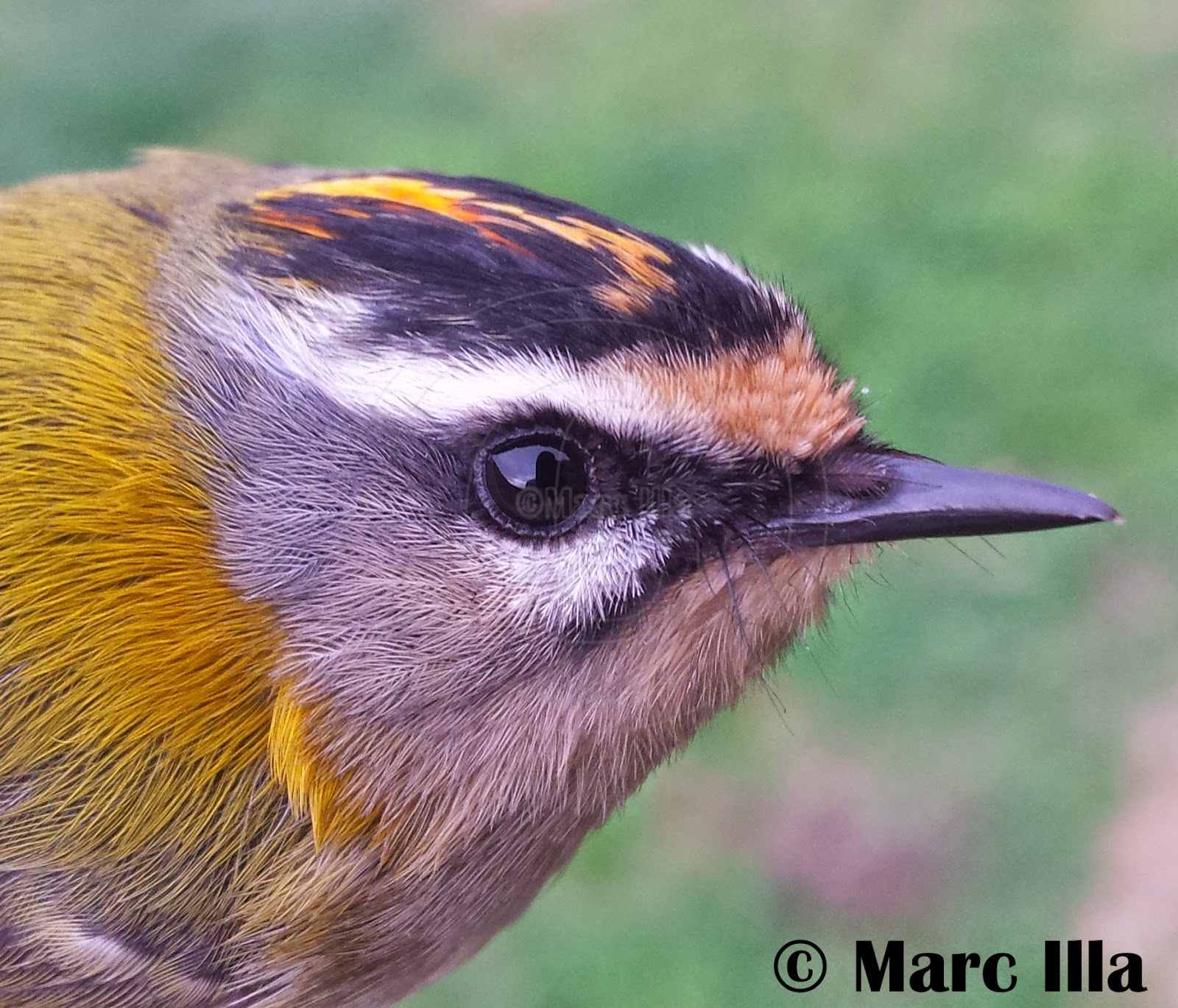 Then, in the last netround, we got a pair!
Ageing Firecrests is not very easy. Svensson (1992) only talks about the shape of the rectrices (the tip) as a ageing criteria. This characters should be always used with caution, beucause it can be quite difficult to assess in many birds.
I specially use the shape, wear and colour of primary coverts and alula to age them. Also, I've seen some birds with moult limit in the greater coverts, with 3-5 GCs moulted (n=8).
Two more pictures; check primaty coverts shape. Photos by Bernat Ferrer.
At least the name is easier to understand... 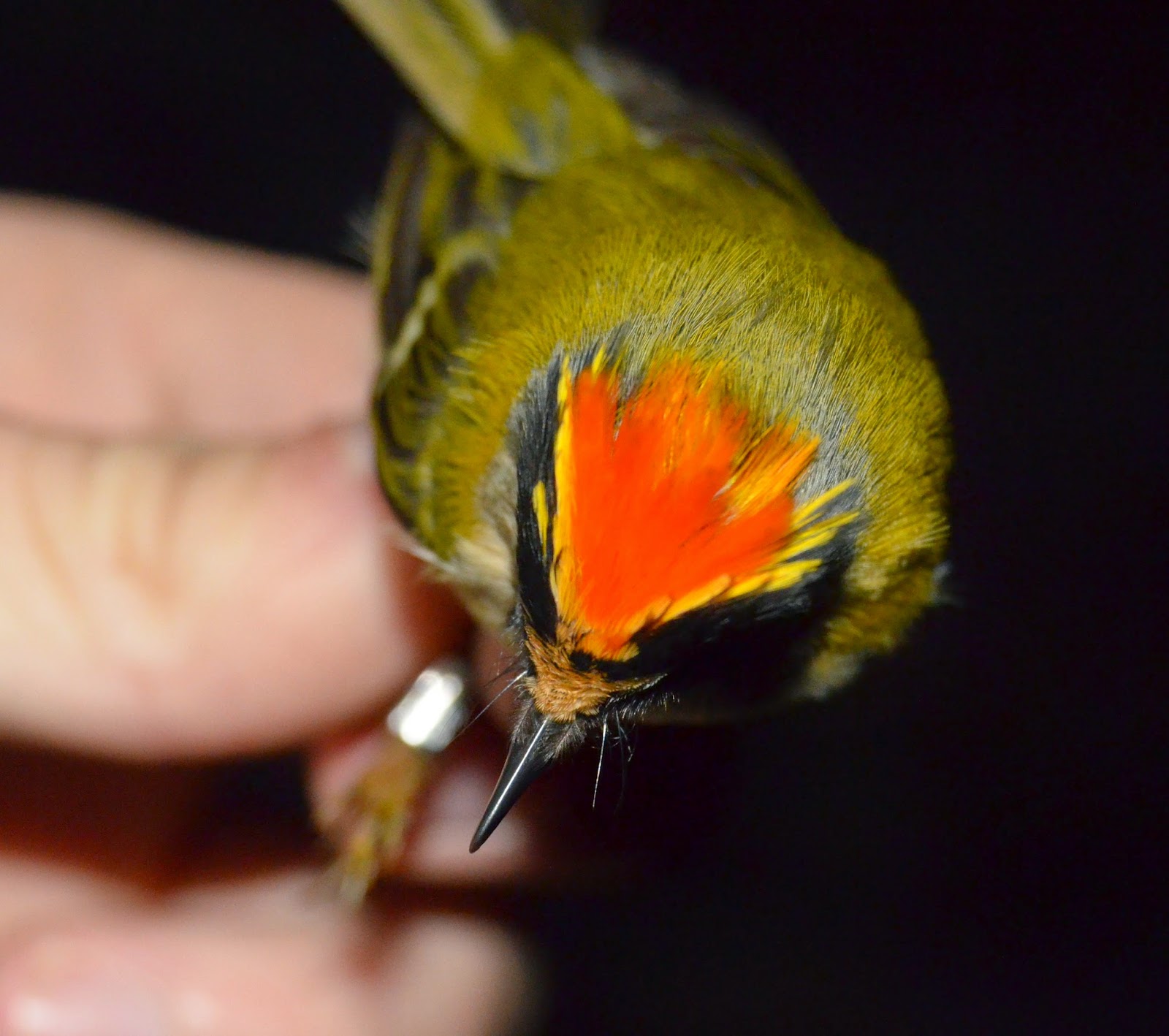 The surprise came in the last net, when we spotted a really bright bird in the bottom shelf. Firstly (and from the distance...) I was convinced it was a very bright Robin (Erithacus rubecula), but then I realised... a Bullfinch (Pyrrhula pyrrhula)! 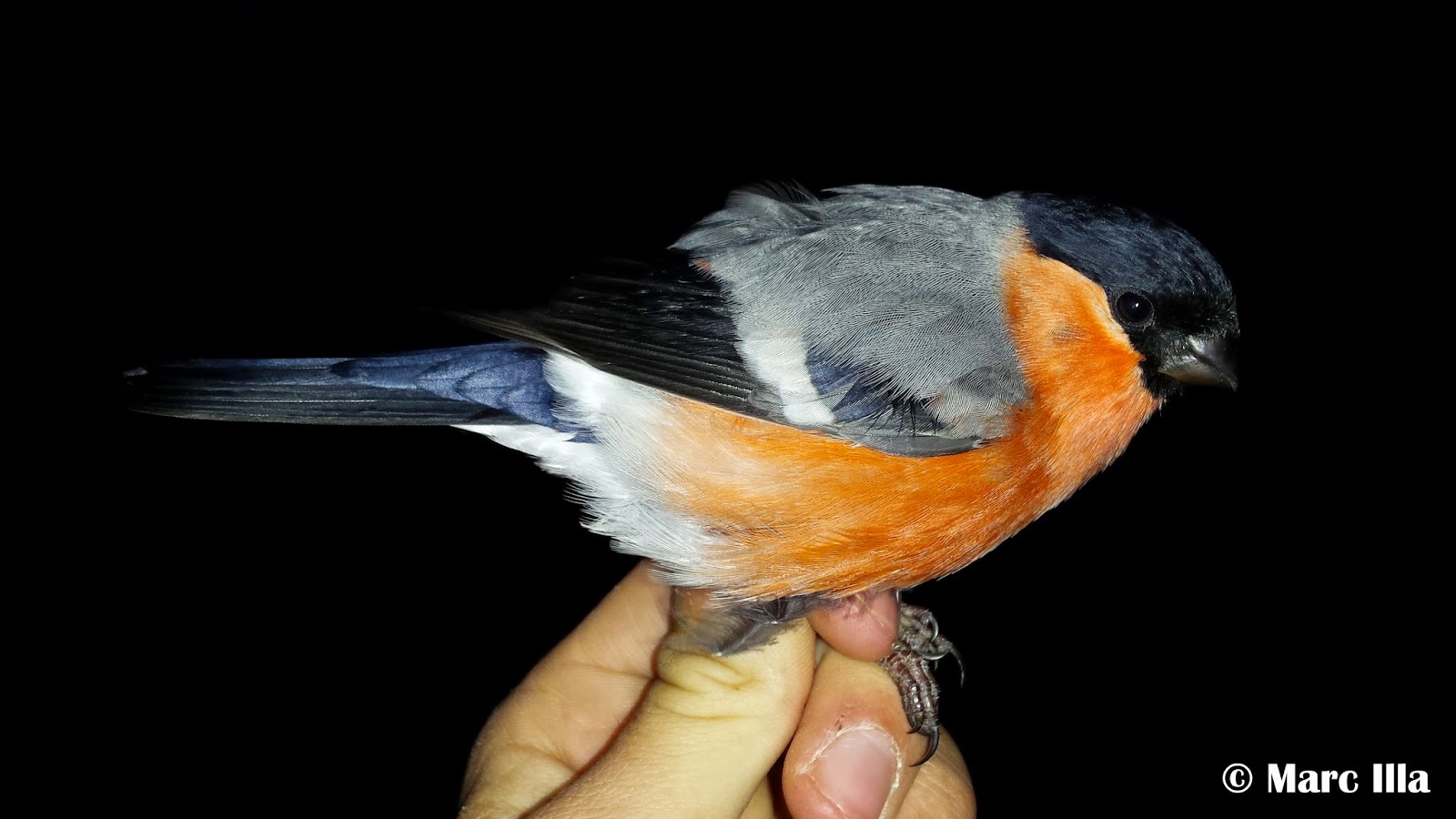 It's considered an scarce migrant, and with some very local winter places in my area. It was the first-in-hand for me, and a male... so, 'the cherry of the cake'! (I don't know if this expression exists in English or not, maybe in other words, but this is the translation from the Catalan "la cirera del pastís").
If the headline of the post is 'November species', and not 'November birds', is because I also found these nice amphibians. They also deserve a mention!
Posted by Marc Illa at 9:43 AM