Recently I discovered a pond very close to Navarcles village, in central Catalunya. I visited the place a couple of times and, even it's quite small, quite interesting stuff for the area appeared. As this season has been really good for Yellow-browed Warblers (Phylloscopus inornatus) in Spain, and I would say especially good in Catalonia (with about 20 sightings or so), I started to feel a Yellow-browed in that place. So I went there, extremely sure I must see one. And shit!, there it was!!!!

Some Moorhens (Gallinula chloropus) were around, and they were quite confident. Last time I wanted to ring one, it took me 21 days of fails to got it...
Maybe because of chance, maybe because of her luck, for the Yellow-browed happiness or whatever, I trapped one the following morning! 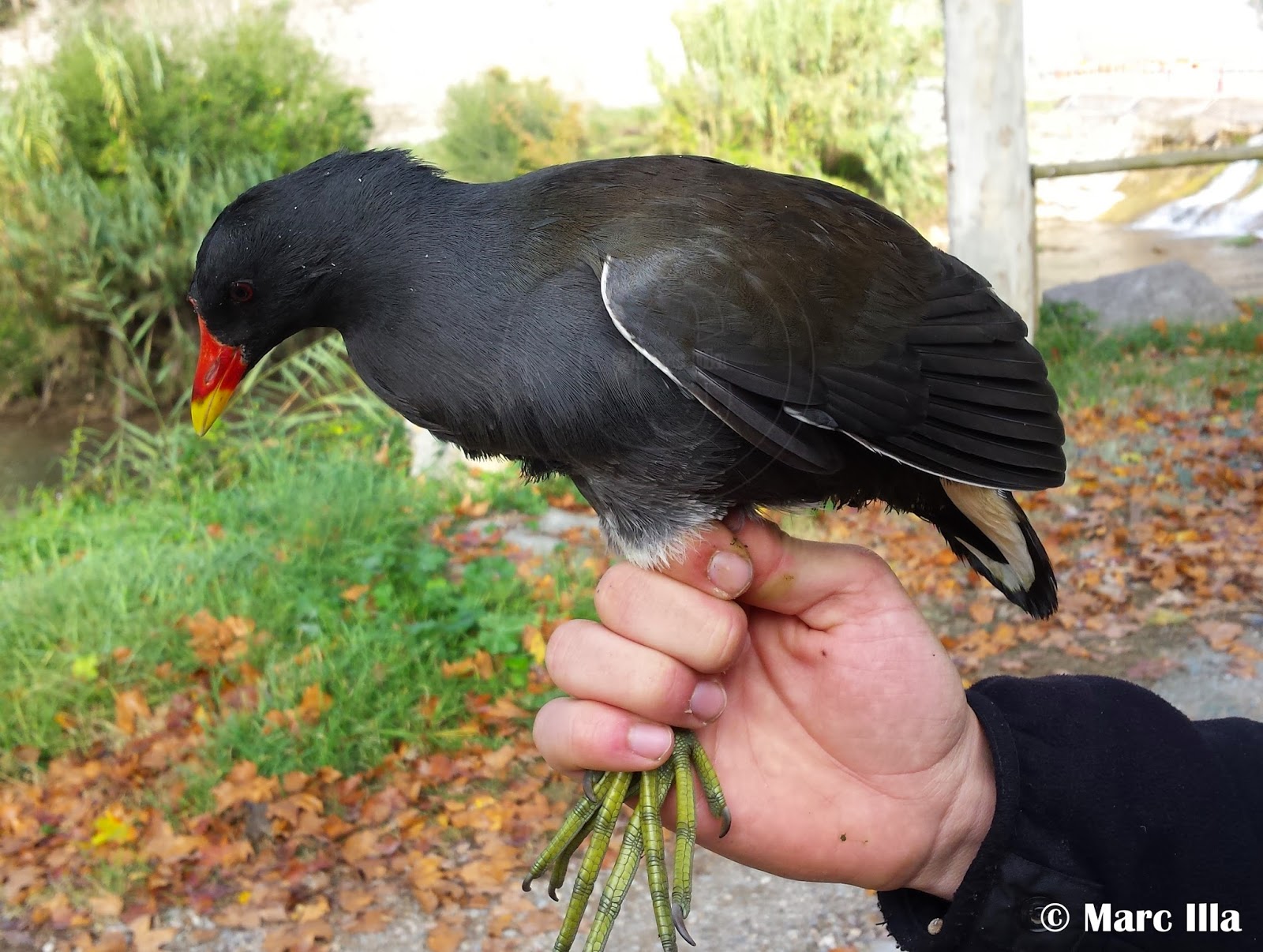 It was a first-year (EURING 3). If you check the post about the last I ringed you'll see how an adult (EURING 6) looks like in February!

This time I used a large-mesh 12 meter mist-net, that we set up crossing the river. As I said, the place is nice, and the idea is also great, so we trapped a Green Sandpiper (Tringa ochropus) too! 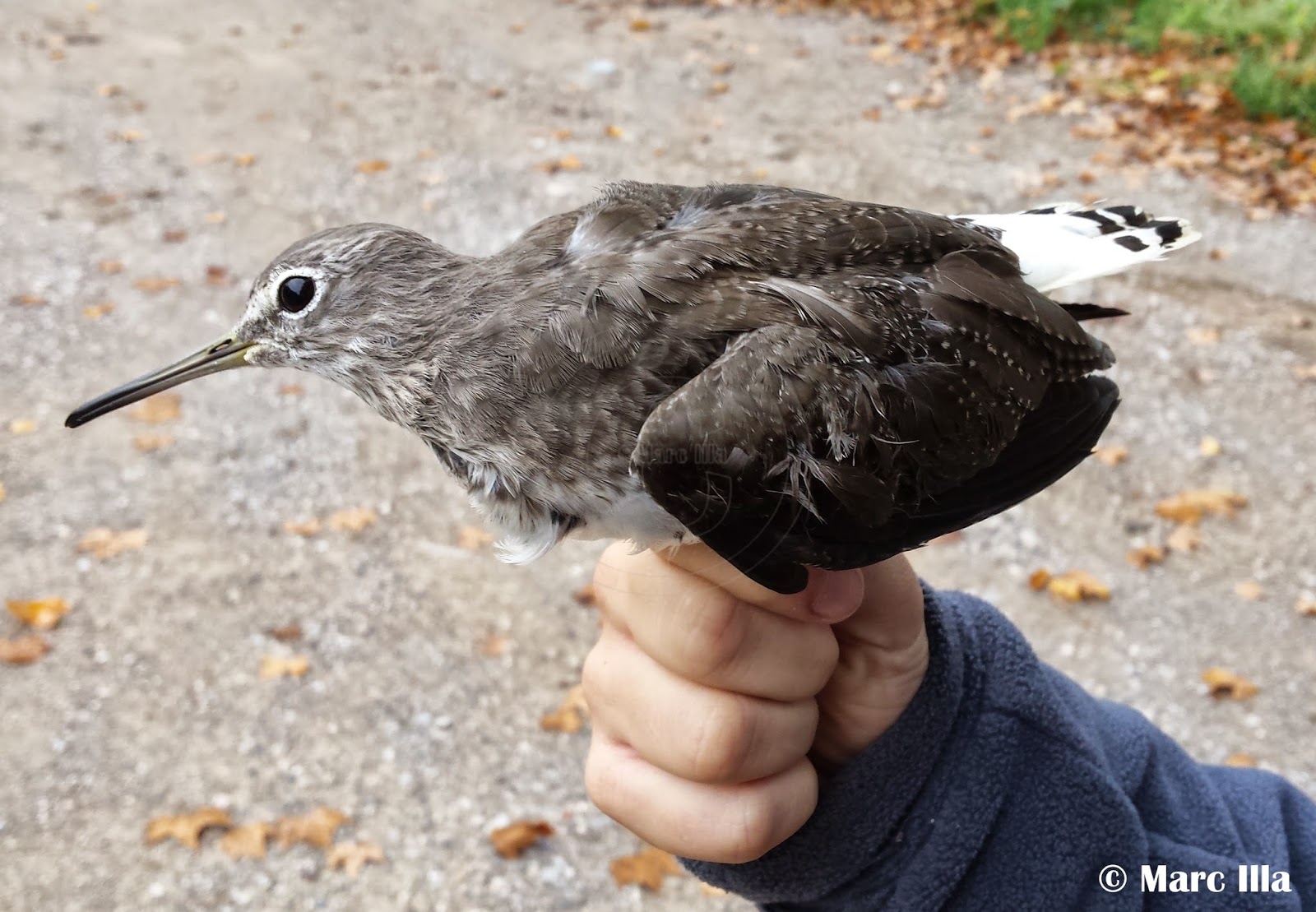 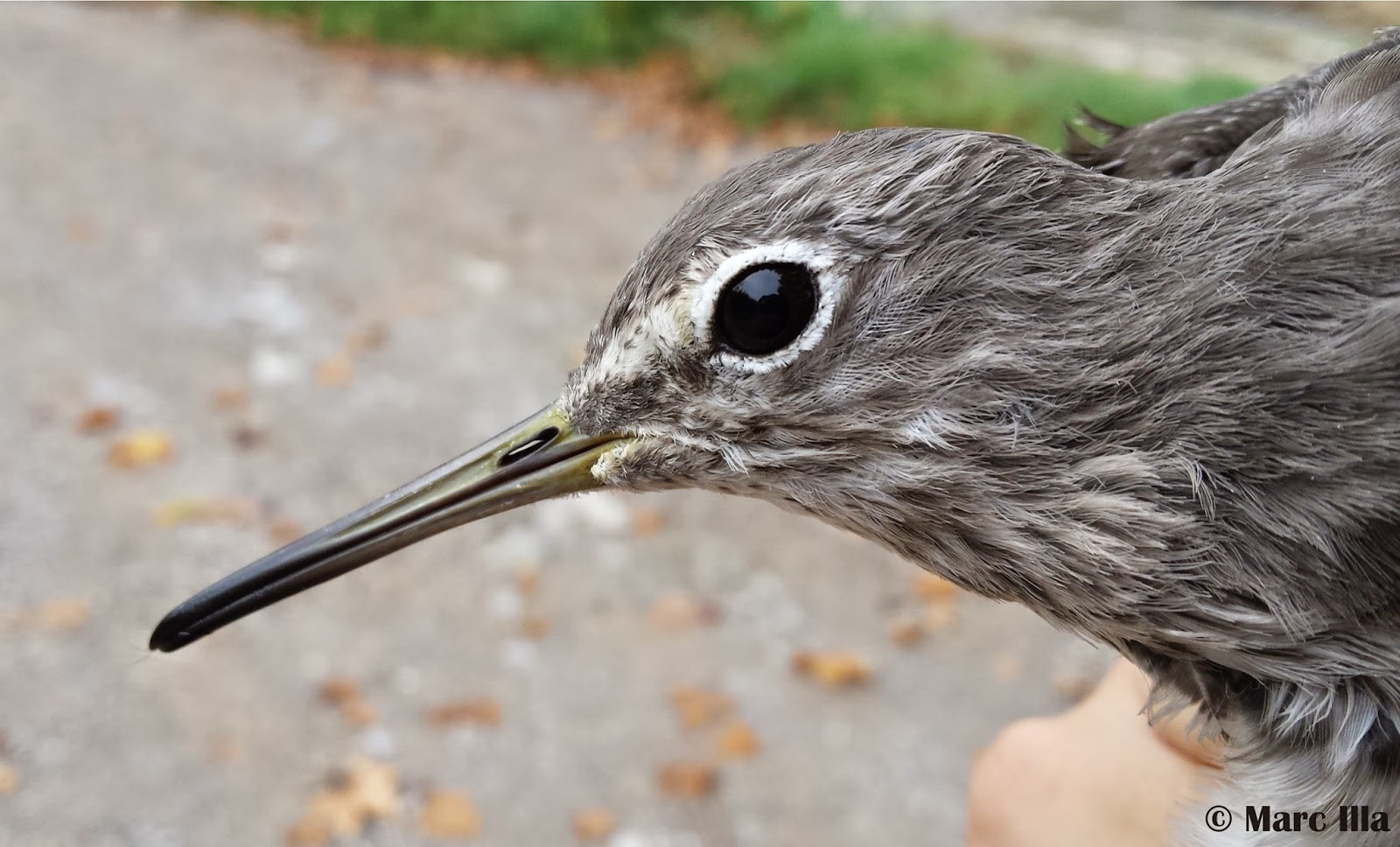 It was an adult (EURING 6). HERE you can see some notes about a 2nd-year I trapped in spring, and some things about the moult strategy.
As you could see even in the field, white dots in upperparts and wing coverts are more difuse in this bird rather than in a juvenile. Tertials, for instance, have very small dots that contrasts heavily with the juvenile pattern.
Following Cramp et. al. (1983), adults start the moult close to the breeding areas, during migration, or in the winter areas; a lot of possible combinations involving moult suspension. This bird was still moulting the 2nd and the 3rd primaries (inwards), with the outermost one retained. So, the outermost primary was retained, surprisingly not so worn. Also, secondaries 3 and 5 (inwards) were retained, not very worn and adult-shaped (that's why I aged it as a 6 instead of a 4). It was also interesting to see some feathers fresher than others, like the bird is doing a sort of partial moult when is still finishing the postnuptial. Theoretically they start the partial prebreeding in late December.

First postnuptial Green Sandpipers are seen in Catalonia in June, while last spring migrants are seen usually in early May (maybe there're some later ones...). I wonder if this bird is of the 'long-stayers' in Catalonia that starts the moult here (moulted primaries were all of the same generation, with no trace of suspension). I wonder if this 'long-stayers' are the firsts to leave in spring, and thus they start the prebreeding moult earlier.

You will see in the photo below the retained secondaries pointed with green arrows, and a 'new' feather with a red arrow: 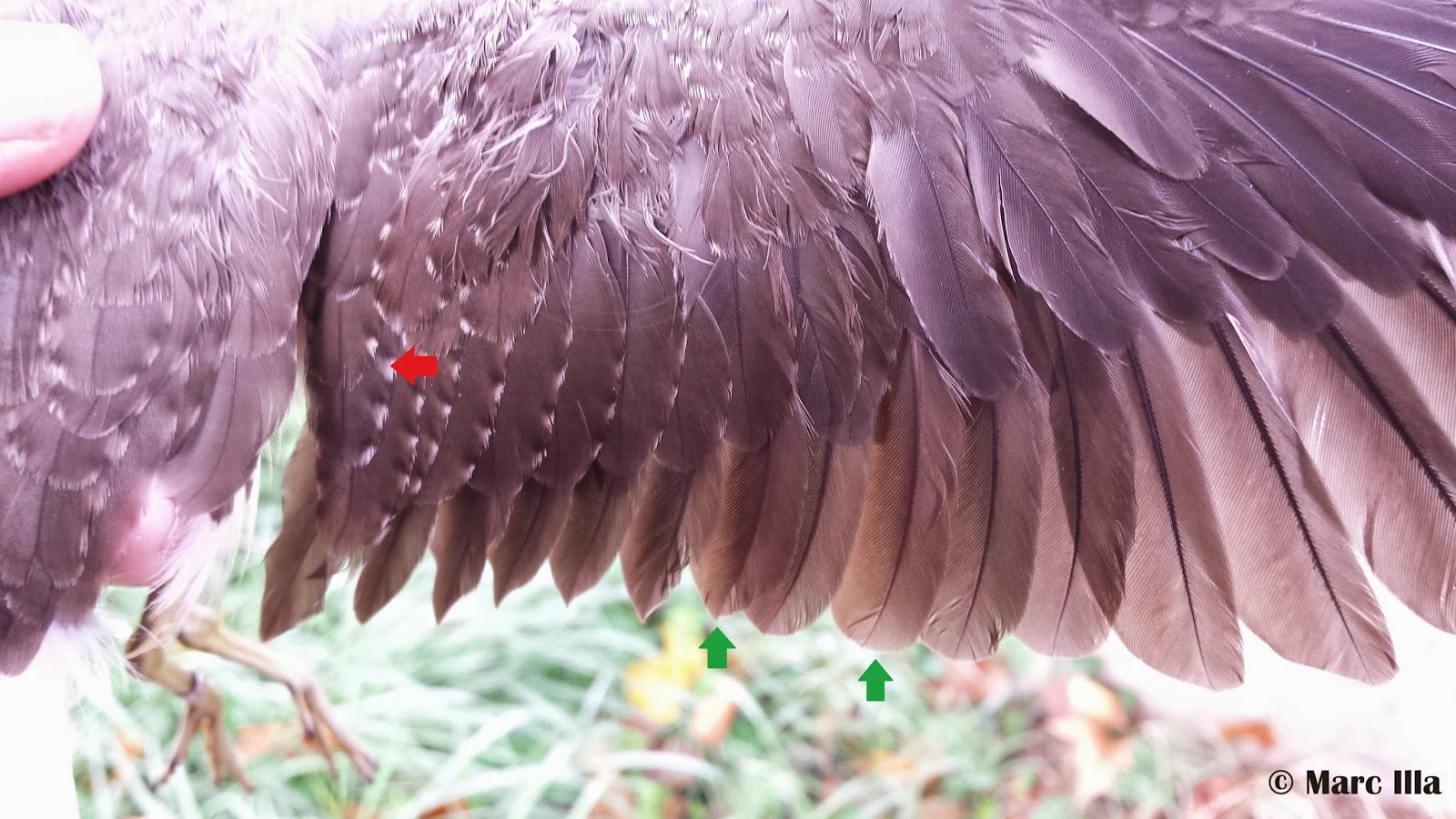 A Mantis called Empusa pennata was also nice to see (and photograph). This is the nymph form, imago are green, with large wings, bigger and some other characters. 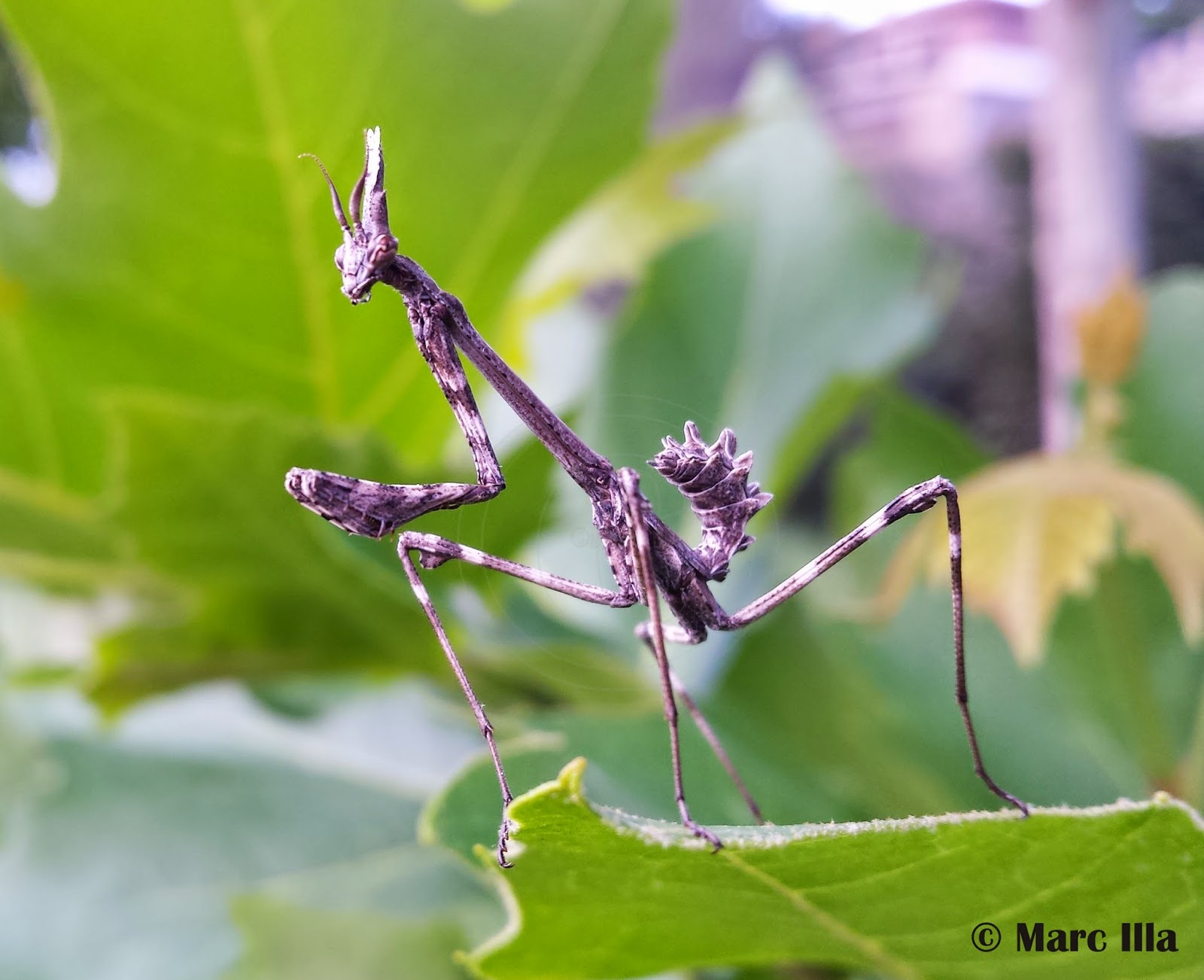 And, related to last post, I trapped another Reed Bunting (Emberiza schoeniclus) with a foreing ring in the roosting I'm studing. This one was from Sweden, unfortunately not from Falsterbo...! 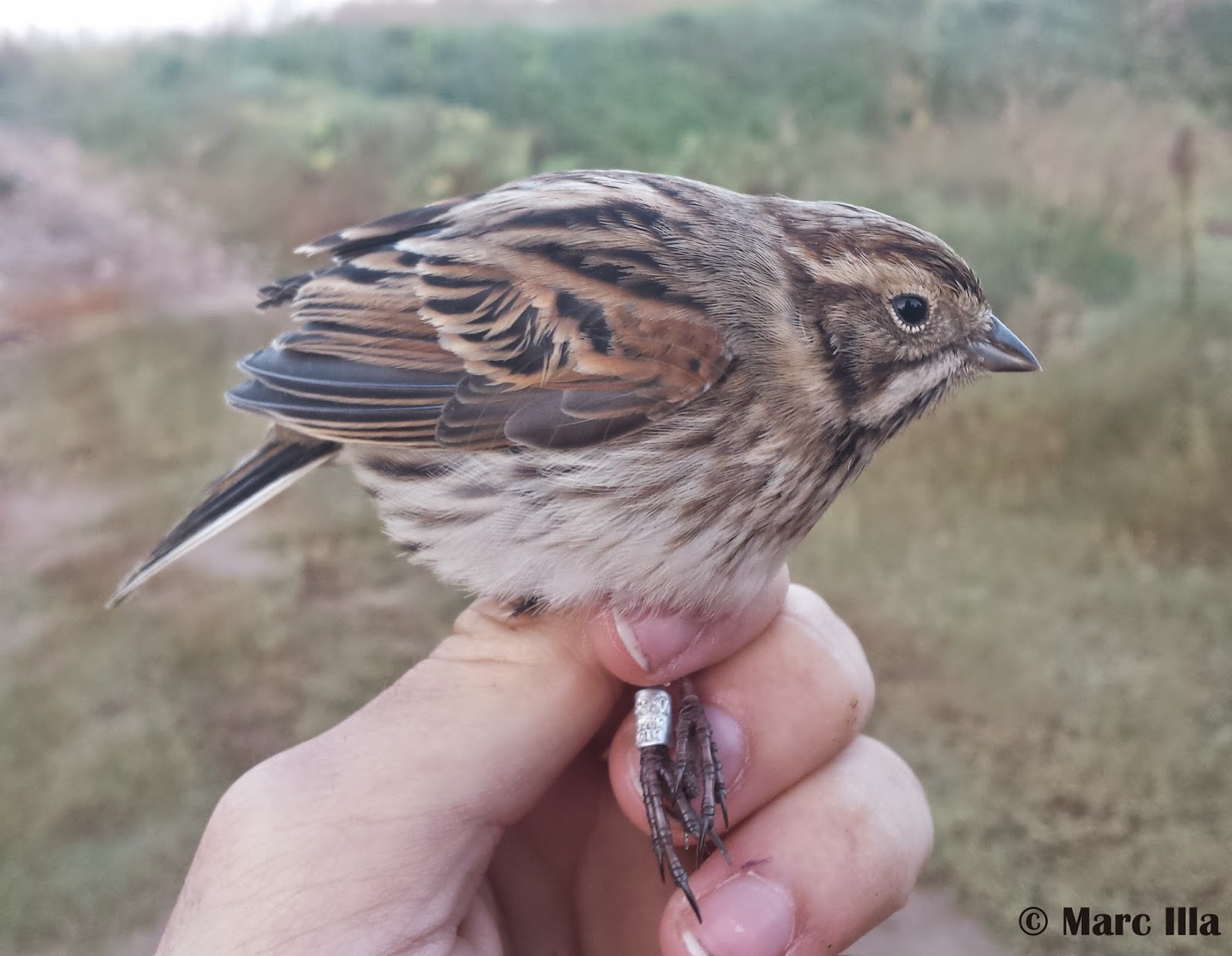 Many thanks to everybody (Bernat, Lídia, Laia, Biel, Ferran, Gemma and Joan) helping with the Reed Bunting's project. We've already ringed more than 370 schoeniclus this year!!, plus 3 foreign recoveries and 6 birds from last winter.
Posted by Marc Illa at 12:15 PM