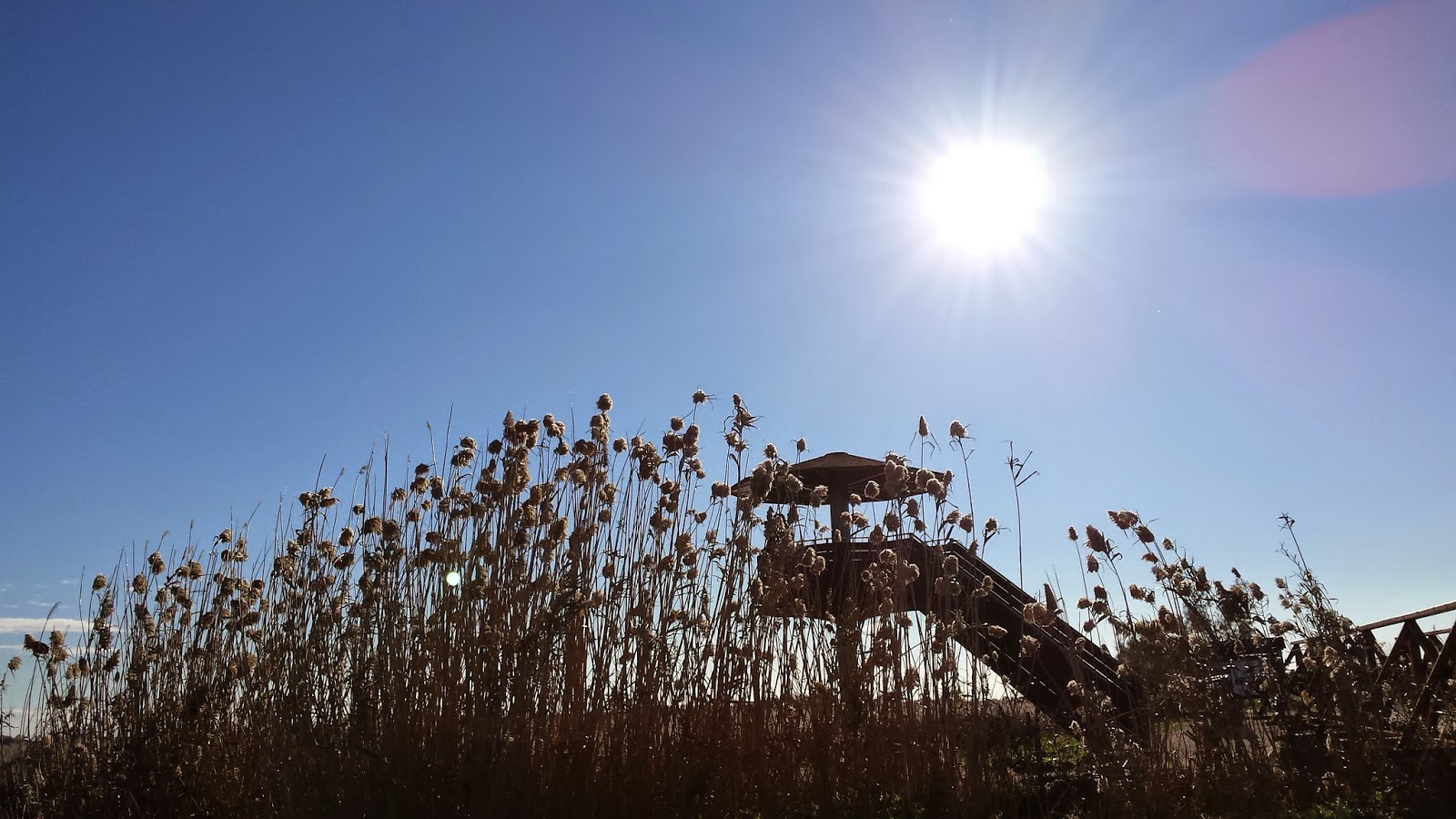 Yes!, it's the fourth year in a row we keep the tradition alive: a birding weekend in the Ebre Delta the first week of December.

This year, the wind wanted to take the leading role, and difficult our aims. With occasionally more than 20 m/s, we 'fought' to finally see some nice wintering species in Catalonia, such as 7 Common Scoters (Melanitta nigra), at least 11 Spoonbills (Platalea leucorodia) and just 1 Red-breasted Merganser (Mergus serrator).

Actually, mainly because of the wind, numbers in everything were quite low, specially in wildfowl. Maybe it was just an impression, given by the strong winds, the very high water levels and the hunting period that was already going on, but the actual feeling was that many birds are still 'on the way down'. Actually, we have had a warm autumn with really strong rainy days the last week of November.
We passed a lot of time checking Gull flocks, following the lasts tractors plowing the ricefields. The scene was really nice, despite being typical. 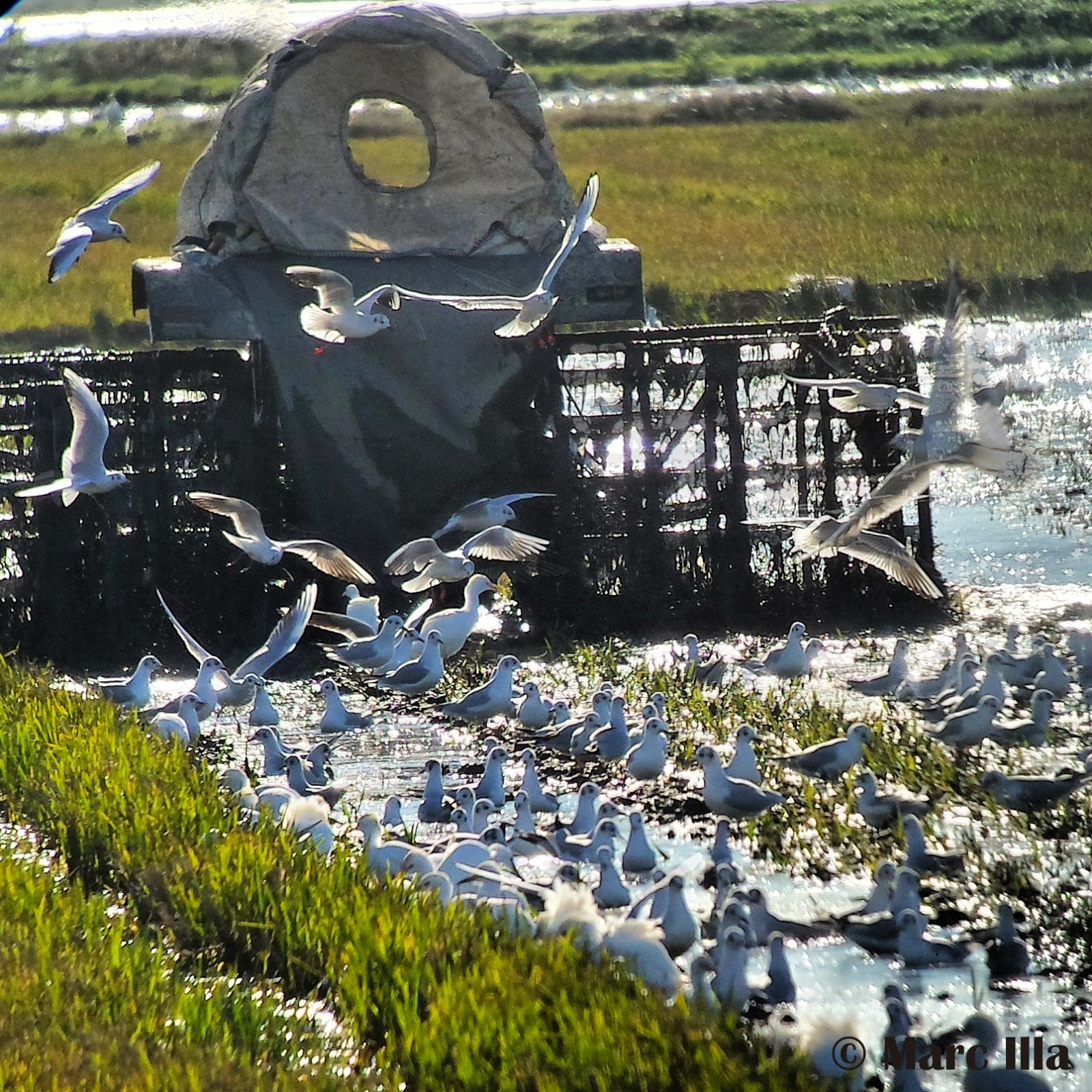 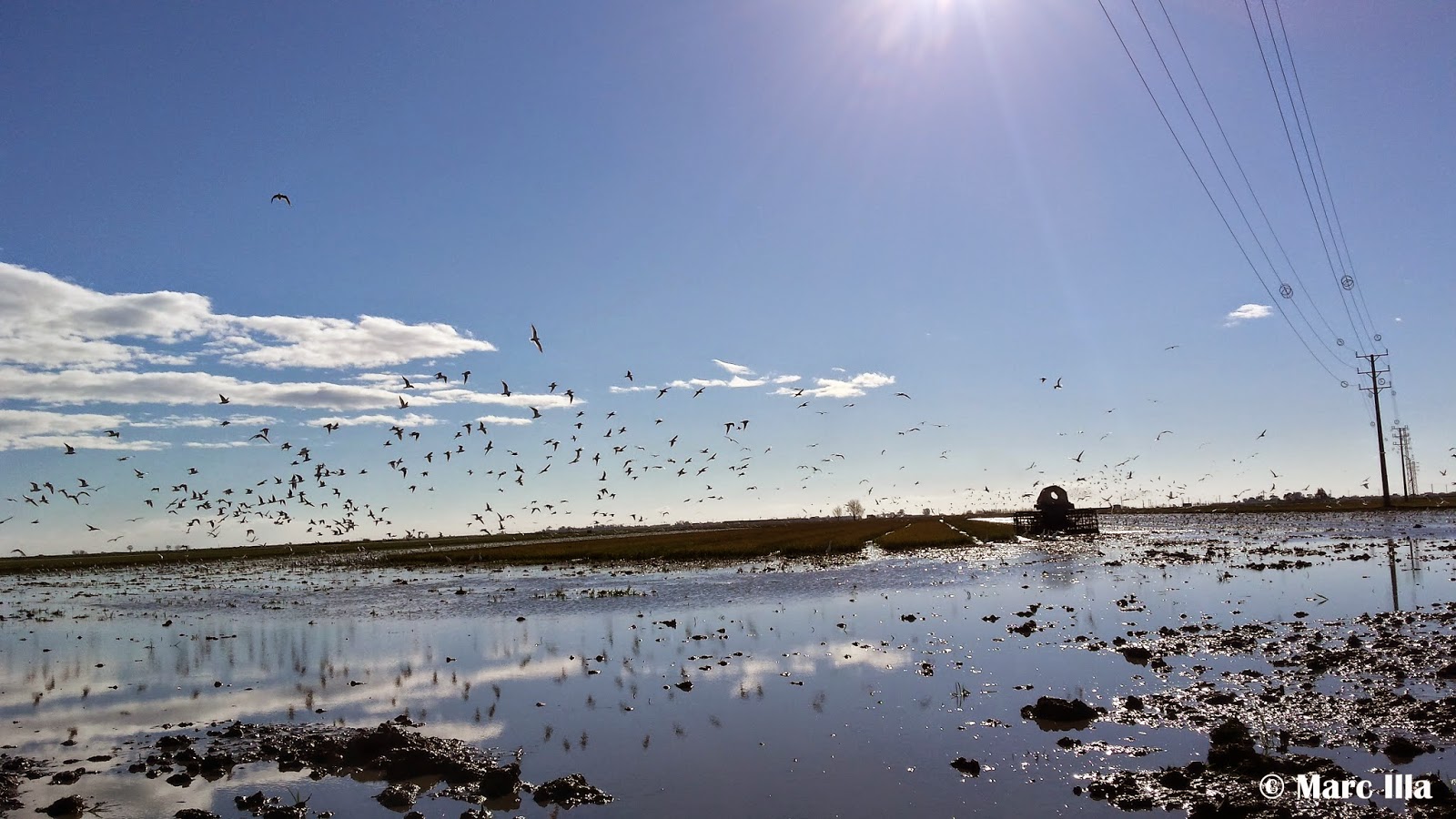 The commonest bird were Black-headed Gulls (Chroicocephalus ridibundus), but among them, Yellow-legged (Larus michahellis) and Lesser Black-backed Gulls (Larus fuscus) were also usual. It was nice to see, as well, up to 8 Whiskered Terns (Chlidonias hybridus), which is a scarce wintering species in Catalonia. The wintering population is estimated between 89 and 185 birds, and they are only in the Ebre Delta (Gargallo & Anton 2011).

Following Cramp et al. (1985) and Blasco-Zumeta & Heinze (online, click here), Whiskered Terns undergo a complete postjuvenile moult that starts on late summer, is suspended prior to migration and then completed in winter quarters. In the same time, adults have a complete postbreeding moult, that also have a suspension during migration period. Cramp et al. (1985) warn the complexity of the moult strategy in this species, saying Moult more variable than in any other Palearctic Sternidae. This 'chapter' of the post is based in my assumptions if any autor is quoted. All photos by Bernat Ferrer. 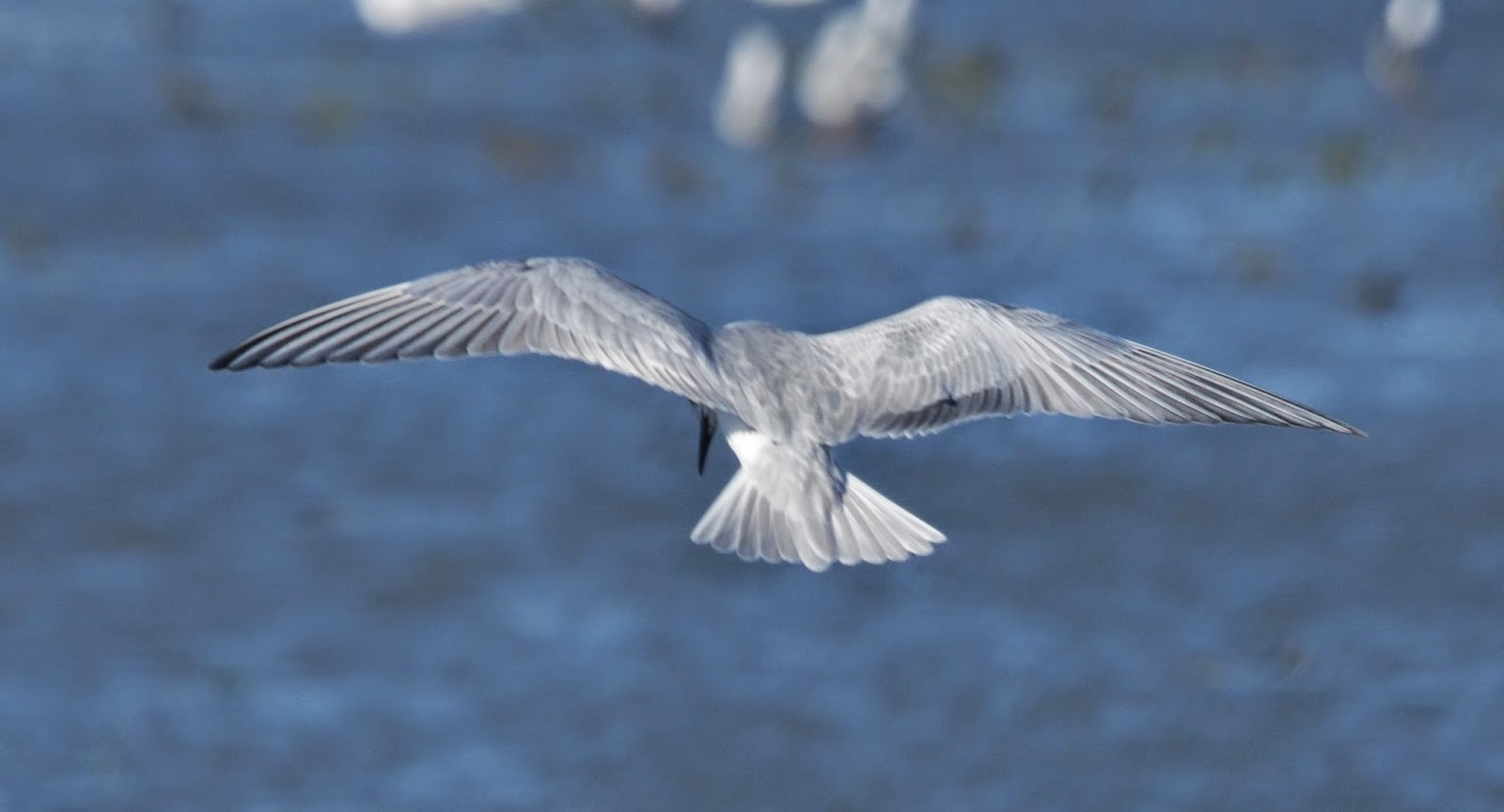 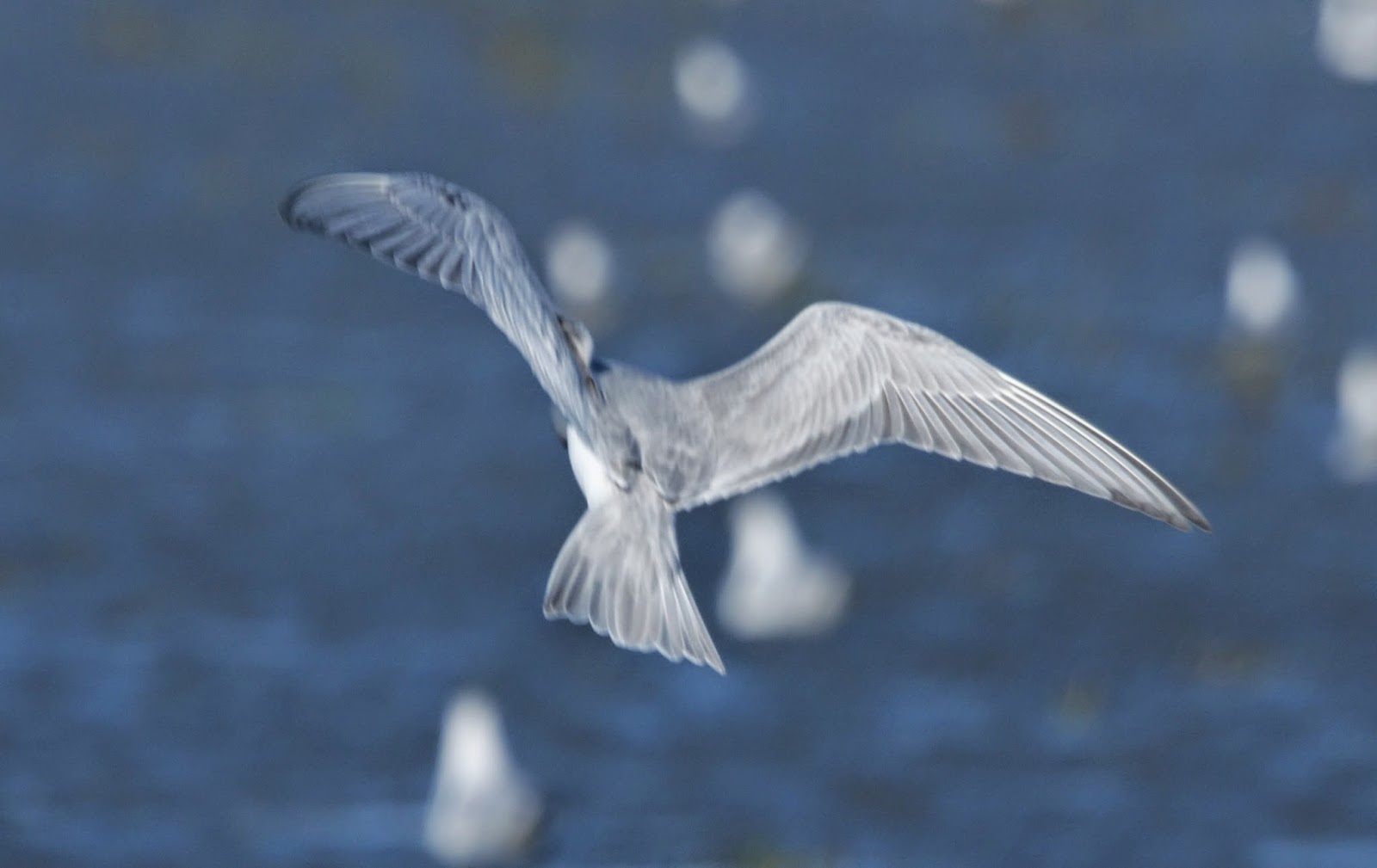 Looking to photos above, secondaries are probably the only feature that seem to be different. Seemingly, the black appeareance is just an ilumination effect, and is not an indication of retained feathers as I thought initially in the field. Anyway, both above birds and the one below look like what I would expect in adult winter plumages, but still having in mind the possibility of 1w with the moult already done. The bird below show another interesting thing: the bill colour. Many 'adult-type' birds had a reddish bill, diferent from the completely black ones in the presumed actual 1ws (see the last photo). 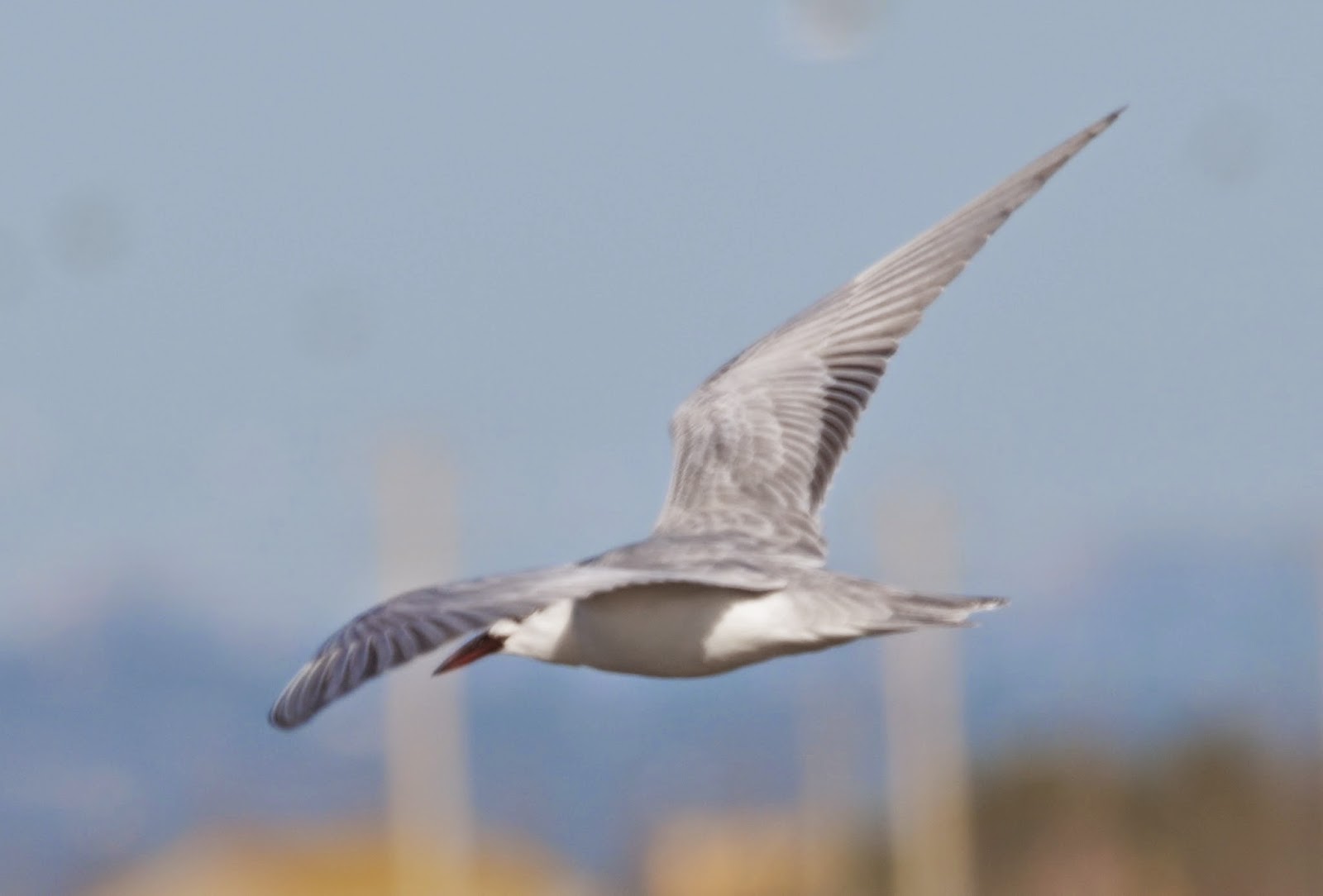 This last bird (below) is the only one that I would age safely. It had an obvious inner greater covert unmoulted with the typical juvenile scaled pattern, as well as some median coverts. I also wonder if the 3 outermost primaries are unmoulted, but i find it quite difficult to assess just with a picture. Also, in the tail, only the central pair seem to be replaced. Look also the complete dark bill, without red at all, as I was saying before. 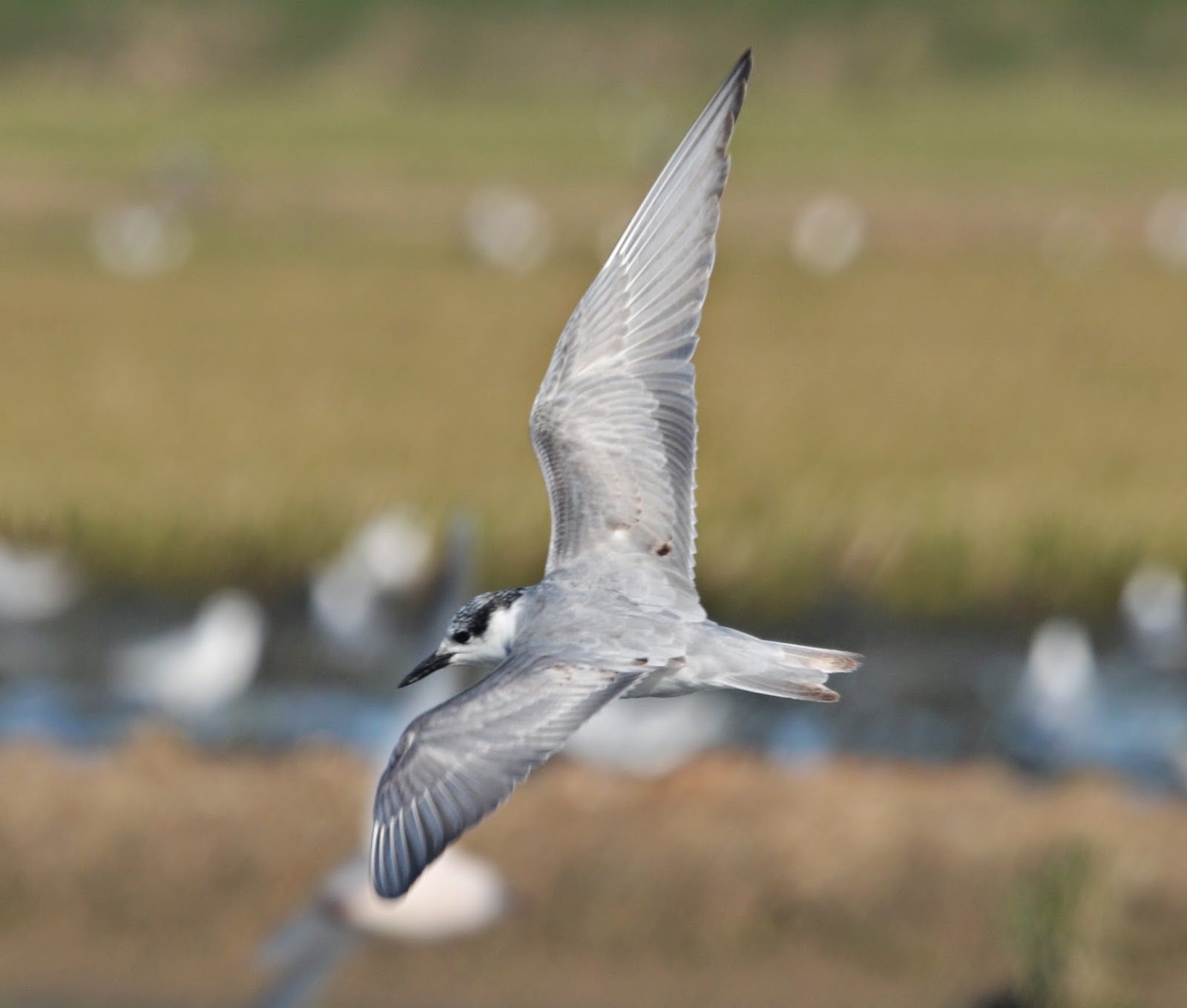 If you know me, you may guess I really want to catch some and study them properly now...

Because of high water levels in almost all typical wader places, the usual flocks were scattered along ricefield areas. We managed to find some Dunlin (Calidris alpina) flocks, but the main part of waders was concentrated along Trabucador beach. There were about 2000 Dunlins, 300 Little Stints (Calidris minuta) and 30 Sanderlings (Calidris alba) in a same flock, and that was pretty nice! Unfortunately, I checked them many times, but no other species in between. 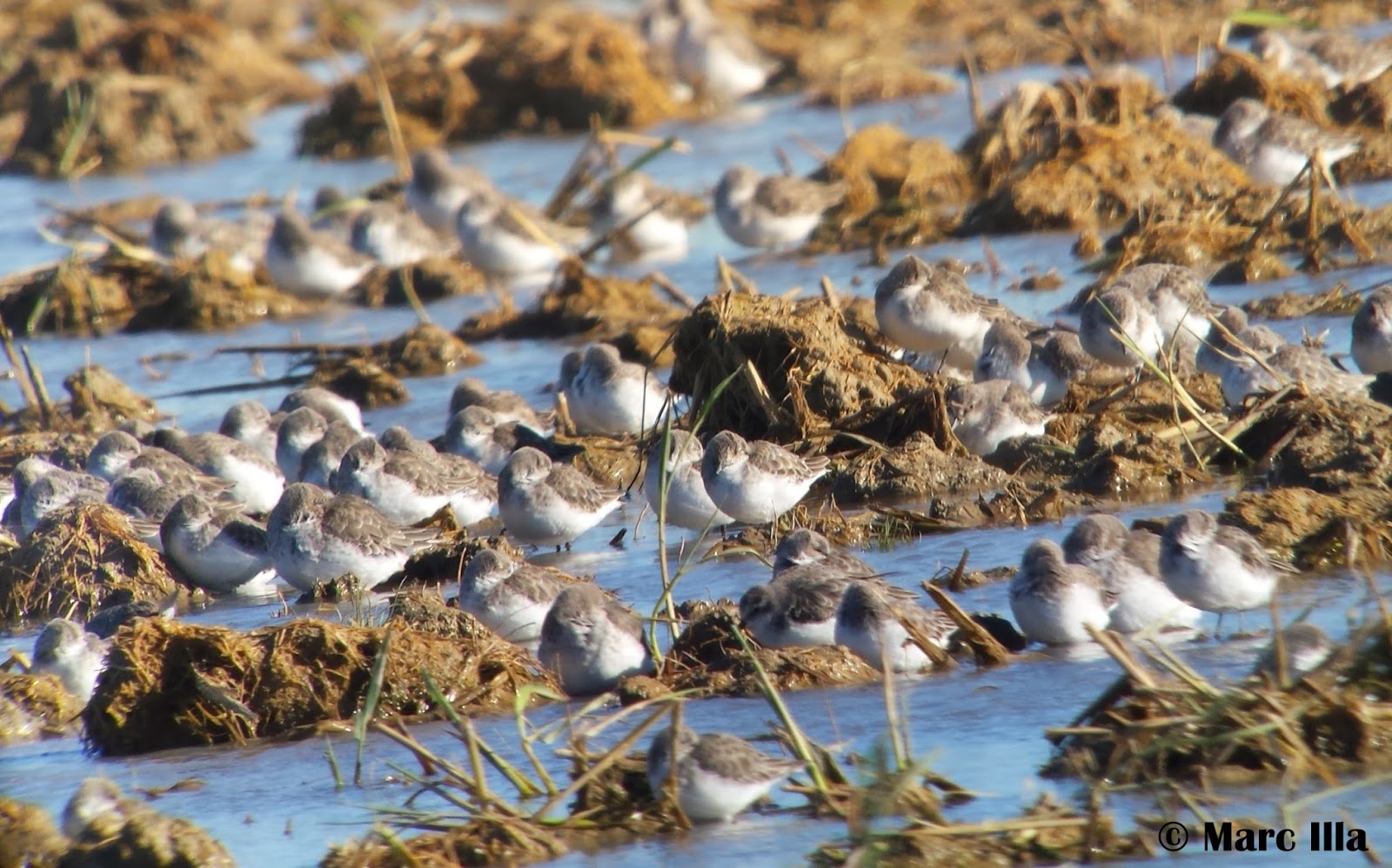 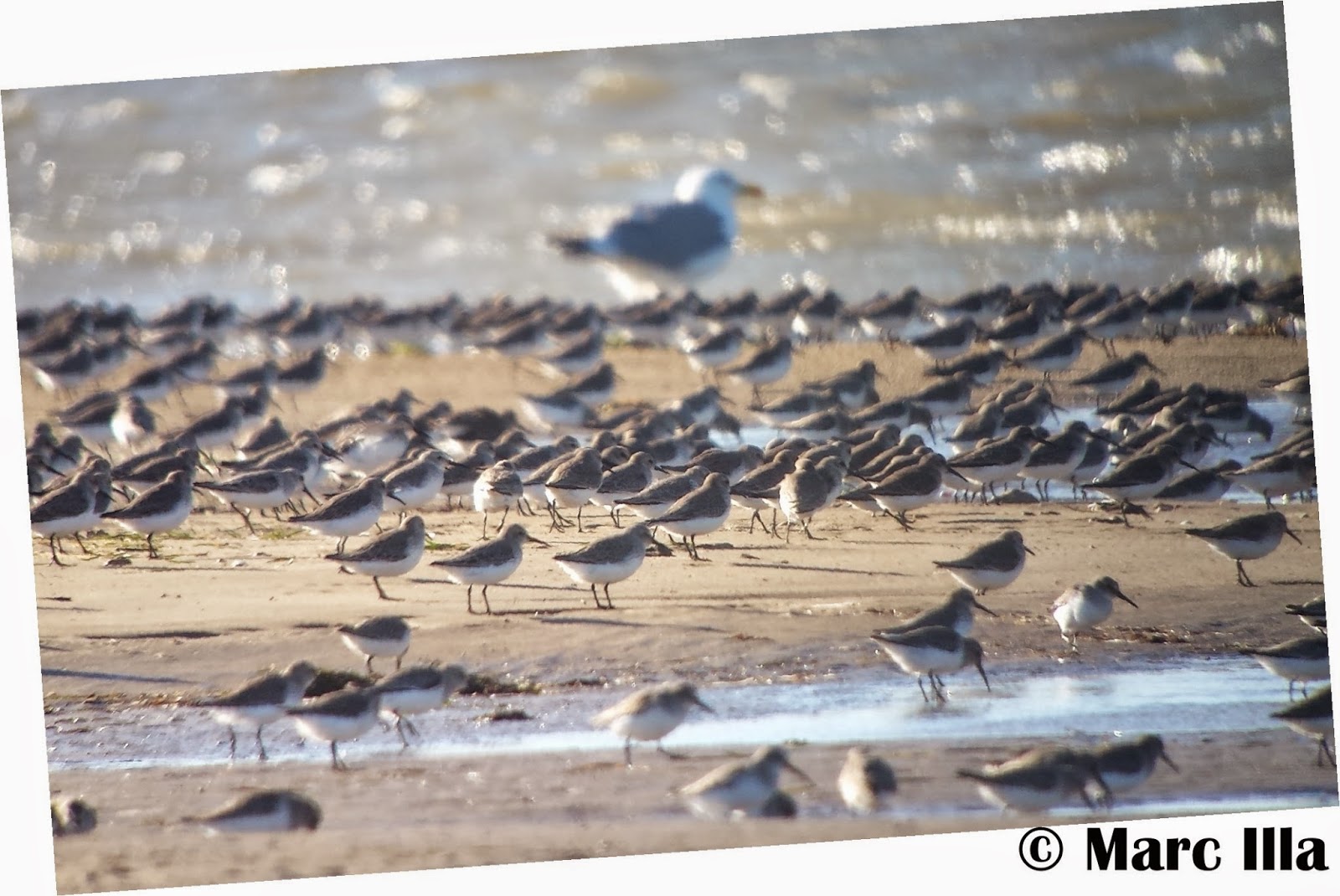 But we finally decided to leave to inland Catalonia, far from the wind, and with the possibility to see some nice species too. Some Bearded Tits (Panurus biarmicus), Blue Rock Thrush (Monticola solitarius), Calandra Larks (Melanocorypha calandra)... and this nice male Black Wheatear (Oenanthe leucura).
As I've been saying every time... Let's see if we can do it again next year!!
Posted by Marc Illa at 12:55 PM