Ringing in June there is always interesting, but for the moment, this year is a bit boring. The most trapped species is the House Sparrow (Passer domesticus), with an average of 40 birds each day. 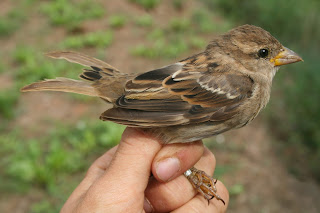 It's very interesting to see the big numbers of House Sparrows ringed in the place (657 up to date), but the very little few retraps. Also, unless I really look for them, it seems very very hard to see a Sparrow carrying a ring. It's like they only come in summer with flocks of chicks, and then they just go away to somewhere else, but I'm all June and July trapping new flocks of chicks, and almost never I retrap any from the last week! We'll keep on ringing and taking data, waiting for an answer...

Greenfiches (Chloris chloris) show a similar case. We've ringed 113 individuals up to date, and we have to keep in mind the place is really small (4,5 ha), and that in winter, Greenfinches are scarce. I guess the place will attract many birds from the town, where its a usual breeder in parks and private gardens. But still, the very little few of retraps is interesting. 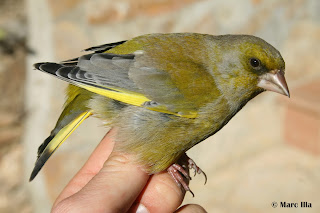 If anyone is taking my rings out, please, stop joking me! :P

83 species is also something to stand out. We have trapped a very nice combination of species!, I'll post a collage to summarise. The last species to be added was this Western Bonelli's Warbler (Phylloscopus bonelli). I'll also post a list of all captures. 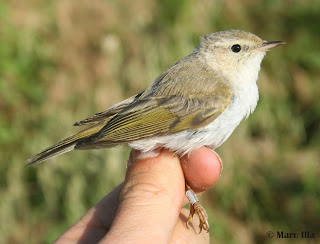 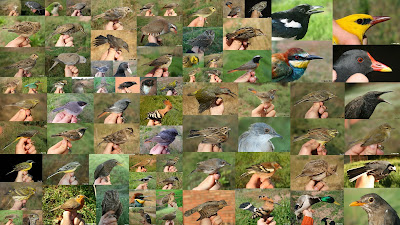 Many thanks to everybody who make this possible. The list of names would be very large, so I'll just say a special thanks to Escola la Serreta, a school that is making sure all their pupils learn to respect nature, and to Joan Manubens and Bernat Ferrer, that have been helping since the very beginning!
Posted by Marc Illa at 11:07 AM