2015 spring will be specially recorded for the Eastern species influxes we have got in Catalonia. If in April we got good numbers of Wood Warblers, May has been unforgettable for the numbers of Red-footed Falcons (Falco vespertinus). The scenario is similar to the one with Wood Warblers: a scarce eastern transaharan migrant in Catalonia, with usually low numbers every spring, but with the chances of (massive) irruptions for whatever amount of variable things. As I did with sibilatrix, here I post the maps (generated with www.ornitho.cat) of vespertinus sightings in Catalonia each spring. 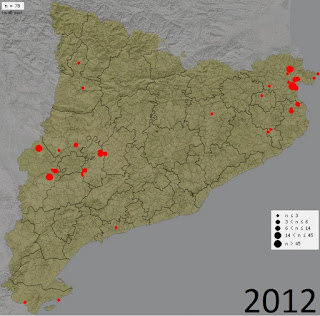 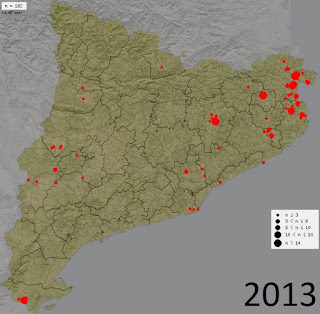 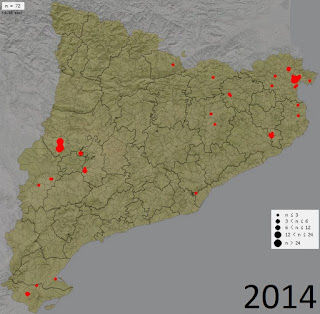 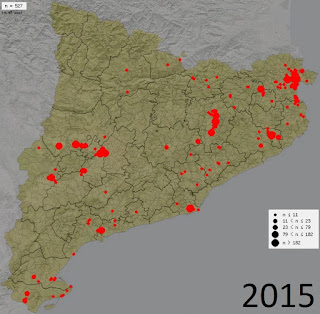 We can almost state that Red-footed Falcons have been seen everywhere in Catalonia where it was more or less a suitable place. At least inland, a very high percentage of harvested fields (specially those that were plowed), had some verpertinus hunting around. 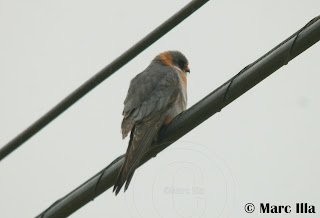 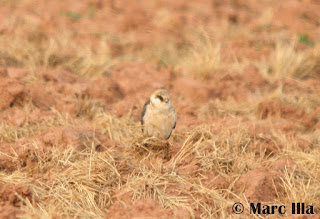 Of course, the invasion has affected other places. In fact, it has involved the entire W Europe and NW Africa, even reaching the Canary Islands. As Marcel says is his excellent blog, 'What the hell is going on?'
I really don't know neither. Just two things come into my head when I try to undertand a little the causes of this. The first one is the invasion that took place last autumn in Poland (see here, and just be amazed for the video...). I haven't read about possible theories of that invasion last September, but the thing is many birds were in a western place than usual. Then, the second thing, is the wing. I've been checking as many websites I could to try to find out if in any place in the W Mediterranean was blowing a strong easterly wind to explain it. I couldn't find any obvious thing. But!, it seems that very strong SE winds were specially noticeable in NW Africa (Go-South Bull. (2015), 12, 39-45).
Anyway, then I want to explain the irruption of Icterine's Warbler (Hippolais icterina) we have also had... Look also the maps generateed with data from all ornitho databases in Europe (look for the note publicated on 21st May).

I started seeing some individuals around my usual places, and it was really nice to see them here. And... I even trapped one while ringing Kestrels! 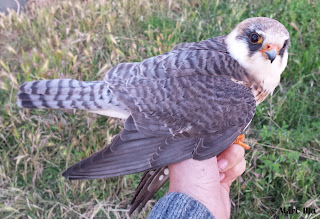 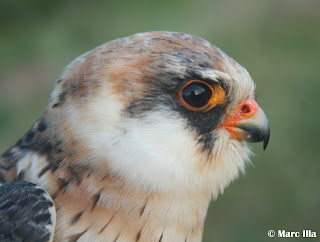 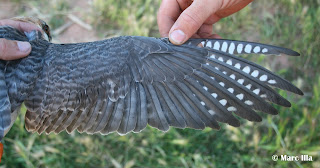 But the best came in a short afternoon visit to Ossó de Sió drylands. About 30 birds had been seen there, and I wanted to enjoy a biggest grup rather than my 5 birds at home, just to feel better the actual influx. I spot the first one, an adult male, from the main road. Trying to get closer, I saw a plowed field in the distance... and it was actually full of Red-footed Falcons. 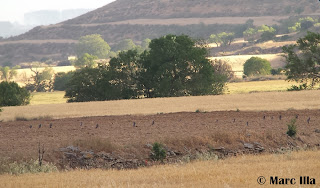 It has just started, surely, one of the most productive afternoons in my life. A male Little Bustard (Tetrax tetrax) was singing behind the field, and giving very nice views. Also, some Stone-Curlews (Burhinus oedicnemus) were walking on the field, and many European Rollers (Coracias garrulus) were flying around, while Calandra Larks (Melanocorypha calandra) were singing 'non-stop'.


In the distance there were some other vespertinus in dead trees, so we decided to go there to see exactly how many. There were about 40 birds in the first field, so we expected to see about 50 or so.
Soon, we saw another plowed field, again full of Red-footeds standing on the floor, hunting insects. There was another field in the other side of the track; obviously with more birds. 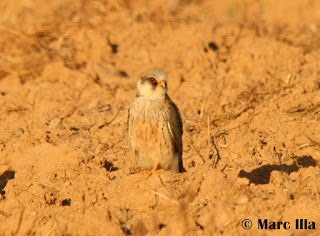 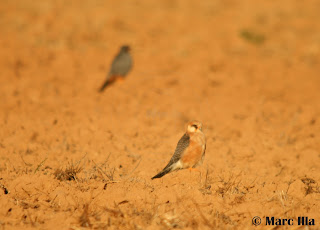 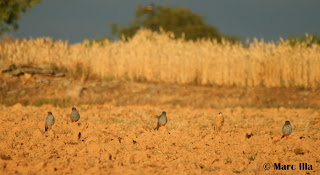 This was the routine all along the afternoon, were we ended up counting a minimum of 229 birds in less than 1 km!, were all the plowed fields were concentrated. Truly amazing!! 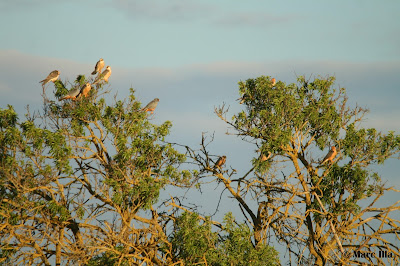