11th August 2013: 2 birds ringed in Flommen. (of course, 2 Reed Warblers...)
During last days we have had some windy and rainy mornings (typical Swedish Summer...) that have difficulted ringing. Sudden rain 'showers' can appear everywhere and move very quickly because of the wind. This make the major part of the storms a bit unpredictable... like this 'incoming storm' that we saw in Revlana. 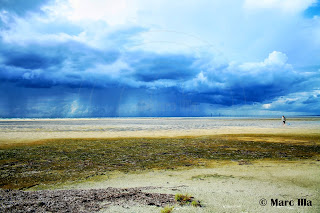 There, thousands of waders were landing, waiting for better conditions in order to continue their migration. Between them, a juvenile Marsh Sandpiper (Tringa stagnatilis) and 4 Broad-billed Sandpipers (Limicola falcinellus) were the best. We got bad luck when we tried to approach to the flocks, because when we arrived in the tip of Revlana, the major part of them had dissapeared...

Last week, but, after two very windy days, I lived my first migration day here in Falterbo.
That morning we were ringing waders in Möklappen (nope, I'm not going to talk about the wader&tern ringing nights, you will have to wait for another post...), and before the sunrise, some Tree Pipits (Anthus pratensis) started to pass in active migration, doing its characteristics calls. During all morning, lots and lots of them were passing through. It was a really good day for migrate, and the numbers proved it: I estimate about 700 different Tree Pipits, and a Red-throated Pipit (Anthus cervinus) between them. Also, about 100 Yellow wagtails (Motacilla flava), about 30 Sand Martins (Riparia riparia), hundreds of Swifts (Apus apus), 2 Sparrowhawks (Accipiter nisus), a Golden Plover (Pluvialis apricaria), a Curlew (Numenius arquata), about 20 Greenfinches (Carduelis chloris), more than 100 Crossbills (Loxia curvirostra) and a really nice Two-barred Crossbill (Loxia leucoptera) were some of the other migrants. It was very interesting see this 'amount' of Tree Pipits, in Catalonia I'm used to see a maximum of 20 in good days and good places. This day I was in the Lighthouse garden. 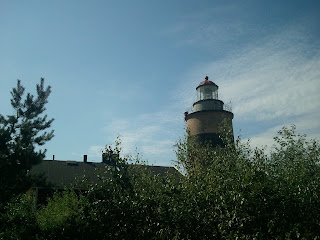 We trapped 33 birds, so a good ringing morning, specially for the interesting species (at least for me), like some Lesser Whitethroats (Sylvia curruca). Also some juvenile Icterine Warblers (Hippolais icterina) and Wood Warblers (Phylloscopus sibilatrix), but the best bird was, undoubtedly, a Thrush Nightingale (Luscinia luscinia). 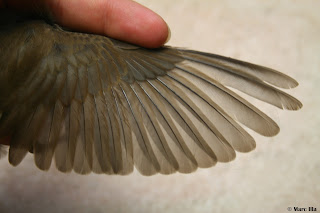 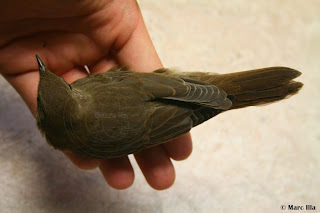 In the afternoon, I went to Nabben, expecting to see more migration. I was really happy when, finally, the lagoon was full of waders. Lots of Dunlins (Calidris alpina), 2 Curlew Sandpipers (Calidris ferruginea) and some other species... and 4 Broad-billed Sandpipers (Limicola falcinellus)!! Despite it was really windy, I enjoyed them a lot. Then, I checked the beach, that was also full of waders and gulls. A 1st-year Caspian Gull (Larus cachinnans) was waiting for being observed, mixed a huge Herring Gull flock.

Now, the best thing we can do is be patience and wait for better weather. It seems that tomorrow is going to be very windy and rainy again, but the day after tomorrow is really promising. Let's see what happens.
Posted by Marc Illa at 7:15 AM